METHODS: Sixty-one p53-positive specimens of rectal cancer were used. After conventional hematoxylin and eosin (H&E) staining, the DIS margin of rectal cancer in large specimens was examined by immunohistochemistry. The patients were divided into A, B, C, and D groups. After a long-term follow-up, the survival curves of the four groups were estimated using the life table.

RESULTS: Fifty-one of the sixty-one cases (83.6%) had DIS. The extent of DIS ranged 0.11-3.5 cm; meanwhile the mean of DIS measured by H&E staining was 0.13 cm. The significant difference was found between the means (t=5.622, P<0.0001). Only 1 of 51 patients had DIS greater than 3 cm. The DIS was less than 1.0 cm in most rectal cancer patients. The long-term results indicated that the survival rate of the patients whose DIS was greater than 1.0 cm was lower than that of the patients whose DIS was less than 0.5 cm.

Defining the optimal distal surgical margin is very important for surgical oncologists during rectal cancer resection[1]. To ensure complete excision of cancer and maximum protection of normal tissue, we should define the length of DIS. Though a distal margin greater than 5 cm is advocated in the past[2], some studies proposed that a distal excision margin of 1 cm is sufficient[3-5], but the molecular clearance margin of DIS is unknown. Molecular techniques have been used to identify tumor markers and occult tumor cells in recent years[6] and the clear margin determined by molecular methods should be different from that by traditional histopathological methods. The accurate assessment of DIS could guide precise surgical resection, aid in estimating prognosis and predict recurrence site, but the molecular margin of DIS of rectal cancer is unknown. In this study, we used p53-immunostained large specimens of rectal cancer to measure the molecular margin of DIS and to clarify the influence of DIS margin on the long-term survival of patients after the resection of rectal cancer.

By using conventional hematoxylin-eosin (H&E) and p53-immunostaining (LSAB), we identified 61 p53-positive cases in 97 rectal cancer patients who were surgically treated in our hospital between August 1996 and October 1997. The characteristics of the 61 patients are listed in Table 1.

Fresh specimens were opened longitudinally, straightened without stretching and pinned to a cork board. The distal margin (A1) was measured and fixed by 10% formalin for more than a week. The whole specimen including oral and anal edges of the tumor was cut longitudinally into 5-mm-thick giant sections. The sections were embedded in paraffin wax and then serial 8-μm-thick sections were cut from the giant sections on a large microtome. Routine H&E staining and p53-immunostaining (LSAB, 1:100 diluted mouse monoclonal antibody to p53, DO-7; DAKO Ltd, Denmark) were performed respectively. The distal margin was measured on large glass specimens (B1) and the extent of DIS was measured microscopically (b1). The microscopic extent of DIS was converted as the distance of DIS in fresh specimen (a1) by the tissue shrinkage ratio by comparing the distal margin measured in fresh specimens before fixation (A1) to that measured on large sections macroscopically (B1) in each case (A1/B1=a1/b1). The data were converted data.

Both means of the DIS obtained by H&E staining and p53-immunostaining were compared by the paired sample statistic t test. According to the extent of DIS by p53-immunostaining, we divided the patients into four groups: A (DIS = 0.00 cm), B (DIS = 0.01-0.50 cm), C (DIS = 0.51-1.00 cm) and D (DIS > 1.00 cm) .The survival curves of the groups were generated by the life table and compared by Gehan test. SPSS software (8.0) was used for all statistical analyses. P < 0.05 was considered statistically significant. 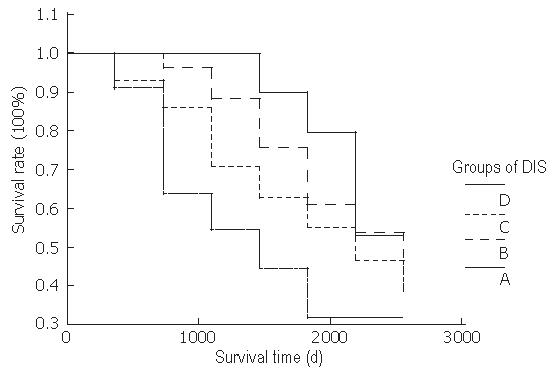 Different from other studies, the whole specimen was expanded with a similar pull force by surgeons during operation and pinned on a flat board. Then the specimen was fixed by 10% formalin for more than 7 d. The extent of DIS was measured on large specimens microscopically. A tissue shrinkage ratio between the distance measured in fresh specimens from surgical margin to distal tumor edge was used to convert the extent of DIS microscopically to the extent of DIS in situ[7]. The error of DIS measured microscopically caused by the shrinkage of tissue in formalin may be avoided by the above method. Moreover, missed diagnosis of DIS should be reduced because the continuous intramural spread can be observed on large specimens.

Mutation of p53 gene is a late event of colorectal carcinogenesis[8]. Using molecular biological techniques, Brennan et al[9] and Hayashi et al[10] assessed the p53 gene mutation in clearance margins of 25 primary squamous cell carcinomas of the head and neck and local lymph nodes of 120 colorectal cancers. p53 gene mutation was found in some specimens without tumor residue, 40-70% patients with p53 gene mutation in clearance margins or lymph nodes had local recurrence and regional lymph node metastasis after the operation. No metastasis occurred in patients without p53 gene mutation. Their studies indicate that molecular biological analysis is more sensitive in finding hidden tumor cells by identifying tumor markers and can predict the site of local recurrence and the prognosis of patients.

Mutation of p53 gene results in the accumulation of p53 protein and p53 protein is regarded as a useful tumor marker[11]. p53-positive tumor cells that cannot be detected by H&E staining can be identified by immunohistochemical staining. Furthermore, hidden tumor cells usually are too small to be found by microscopy after conventional H&E staining.

Accurate identification of DIS of rectal cancer is very important for determining the clearance margin during the operation and preventing anastomosis recurrence[12]. According to the literatures published, DIS detected by H&E staining usually exists in 14.5-65.6% rectal cancer patients[3,7,8]. Because the results of DIS in rectal cancer are different in different studies[13], there is no universal agreement on the length of distal normal rectum that should be removed during radical resection[14]. Some authors suggested that 1-2 cm of distal removal of normal rectum is enough[4]. On the other hand, some cellular and molecular studies suggested that 2 cm is not safe[9]. In our study, though 83.6% (51/61) of the patients had DIS, the length of DIS in 78.4% (40/51) was less than 1 cm, in 6% (3/51) greater than 2 cm and only in 1.6% (1/51) greater than 3 cm, suggesting that 2 or 3 cm of the distal clearance margin is safe enough for most (95% or above) rectal cancers during radical resection.

It was reported that DIS is correlated to depth of cancer invasion and distal metastasis. Patients with positive DIS have a higher risk for developing metastasis after radical resection and their disease-free survival rate is lower than that of those with negative DIS[10]. In our study, patients with longer DIS had a lower survival rate (Figure 1). If DIS is greater than 1 cm, patient survival rate is markedly decreased regardless of distal normal rectum excision and negative tumor residue in distal surgical edge. The relationship between DIS and survival rate indicates that DIS is a prognostic factor of rectal cancer[15].