METHODS: CF was assayed in 284 subjects: 61 with active and 63 with inactive ulcerative colitis (UC), 45 who had proctocolectomy, 35 with active and 20 with inactive Crohn's disease (CD), 40 with other diseases and 20 healthy controls. Trypsin inhibitor (TI) and TI antibody (TI-Ab) were measured in plasma and CF complex by ELISA.

RESULTS: CF in active UC was strikingly high compared with all other groups (χ2<0.001). Similarly, CF was significantly higher in active CD than in inactive CD or in controls (χ2<0.01). In UC, high CF and TI-Ab were associated with the need for operations. Further, high CF, CF/fibrinogen ratio, low TI and high TI-Ab in plasma were associated with disease activity or refractoriness to medication. Elevated CF was not associated with acute reactants like C-reactive protein and white blood cell counts except for erythrocyte sedimentation rate, suggesting that elevated CF was not a consequence of acute inflammation.

CONCLUSION: Elevated CF in active IBD appears to be morbigenous. CF promotes IBD via two main mechanisms, quenching of TI (an anti-inflammatory substance) and impairing microvascular perfusion by forming protein aggregates. CF may also serve as a biomarker of chronic IBD. Additional studies are warranted to fully evaluate the role of CF in IBD and the outcome should contribute to a better understanding of the pathogenesis of IBD.

In 1955, Korst and Kratochivil[1] for the first time described "cryofibrinogen (CF)" as an abnormal protein, which is reversibly cold-precipitable in anticoagulated blood and could form fibrin and clot with thrombin. Now, CF is known as a cold-precipitable protein complex composed of fibrin, fibrinogen and fibrin split products found in plasma but not in serum of some individuals[2-4]. Further, cryofibrinogenaemia is now suspected to be associated with acute and chronic inflammatory diseases, lymphoproliferative disorders, and vascular complications[2-8]. However, it is true to say that up to now, CF has been best known as a risk factor for thrombo-embolic complications[2-9].

Regarding inflammatory bowel disease (IBD) and CF, several independent risk factors for thrombotic vascular diseases have recently been reported in IBD[9-13]. For example, it is known[11] that granulomatous vasculitis and fibrin deposition are components of the inflammatory process in Crohn's disease (CD). Similarly, presence of micro-thrombi in rectal biopsy specimens from patients with either ulcerative colitis (UC) or CD has been reported[12]; the incidence of systemic thrombo-embolic events in patients with IBD is known to be higher than that in the general population[13], reflecting a primary coagulation abnormality in patients with IBD[9-13].

Another biochemical substance, which was investigated in this study in relation to IBD, is trypsin inhibitor (TI). TI is best known for inhibiting trypsin to spare bystander tissues from unwanted damage[14]. Additionally, the literature provides convincing evidence for an anti-inflammatory action by TI as one of the body’s naturally occurring immunoregulators[14-16] that include suppression of TNF generation[7]. In view of the above background, in this study we hoped that finding the relationships between IBD, CF and TI might contribute to the understanding of the pathogenesis of IBD.

Between 1994 and 2001, a total of 284 subjects were investigated in this study. The demography of the study populations is presented in Table 1. There were 169 patients with UC (61 with active UC, 63 with remitted UC and 45 had proctocolectomy), 55 with CD (35 with active CD and 20 with remitted CD), 40 disease controls and 20 healthy controls.

Patients with active UC had bloody diarrhoea more than 6 times/d, a score of at least 14 on Lichtiger’s clinical activity index (CAI)[17] and colonoscopy revealed Matts’s endoscopic grade 3[18]. Patients with active UC received total parenteral nutrition (all had severe UC) together with 5-aminosalicylic acid (5-ASA) or sulphasalazine orally and intravenous (iv) prednisolone (30-80mg/d) except for 5 patients who had their first UC episode before starting drug therapy. The remaining 45 patients with UC who had proctocolectomy with ileal pouch anal anastomosis (IPAA) at least 6 mo prior to this investigation represented the post-operative UC group. None of the 55 patients with CD received steroid therapy. Patients with active CD (n = 35) had a mean Crohn’s disease activity index (CDAI) of 266[19]. The subgroup with inactive CD (n = 20) had a CDAI of less than 150 (clinical remission level). Forty age and sex matched hospital patients with other diseases were included as a disease control group (Table 1). Of these, 10 had non-IBD acute colitis caused by bacteria [enteropathogenic Escherichia coli, Vero toxin (-) in 6, Salmonella enteritidis in 3, and Klebsiella peumoniae in one], 4 with rheumatoid arthritis, 4 with primary biliary cirrhosis, 2 with autoimmune hepatitis, 2 with Bechet's disease, 2 with systemic lupus erythematosus, and 1 with polymyositis in autoimmune and collagen diseases, 4 with colonic polyps, 3 with chronic hepatitis C, 3 with hypercholesterolemia, 3 with peptic ulcers who were also Helicobacter pylori positive, and 2 with gastric cancer in non-acute and non-autoimmune state. Twenty healthy subjects who were in the same age range as patients were included as a healthy control group.

Measurement of fibrinogen and cryofibrinogen

Blood samples were obtained in the early morning fasting state. A 10 mL of whole blood was collected for cryoprecipitate measurements. The blood sample was pre-warmed at 37 °C in a plastic syringe and then was transferred into 2 plain glass tubes at 37 °C; one tube contained 3.8% sodium citrate solution (9:1; vol/vol blood/citrate ratio), the other tube contained no anti-coagulant.[20] The tubes were incubated at 37 °C for 1 h and then were centrifuged at 1500g for 30 min to separate plasma or serum from cells.[21] Fibrinogen was measured by immunoturbidimetric assay according to a published method.[22] Total fibrinogen concentration in the plasma was measured before refrigeration. Plasma and serum samples were kept at 4 °C for up to 72h prior to assay of test substances. This was to allow precipitation of any abnormal fibrinogen into CF. Tubes were further spun at 1500g in a refrigerated centrifuge at 4 °C for 30 min. The supernatants were then rewarmed to 37 °C and used to measure fibrinogen and CF concentrations. The concentration of CF was measured as concentration differentials of fibrinogen before and after refrigeration.[22,23] The fibrinogen concentration was measured at 24 and 72 h after refrigeration. Sera samples were used for the detection and measurement of cryoglobulins (if present).

Trypsin inhibitor and trypsin inhibitor antibody (TI-Ab) in plasma and in CF[14] were measured by enzyme-linked immunosorbent assay (ELISA) in 18 patients with IBD (10 with UC, 8 with CD) as previously described.[24] These subjects were selected at random among the patients.

All participants provided informed consent to be included in this study after they were informed of the purpose of the study and the nature of the procedures involved. Likewise the study protocol was reviewed and approved by our hospital Committee on the Ethics of Clinical Investigations Involving Humans.

RESULTS
Incidence and concentration of CF among groups

To verify that high plasma CF was not associated with acute inflammation, its concentration was compared with concentrations of acute phase reactants like CRP, ESR, and WBC. Among these, only ESR showed a strong correlation with CF. (r = 0.830, χ2<0.001, Figure 2). There were no significant correlation between CF and CRP or between CF and WBC. 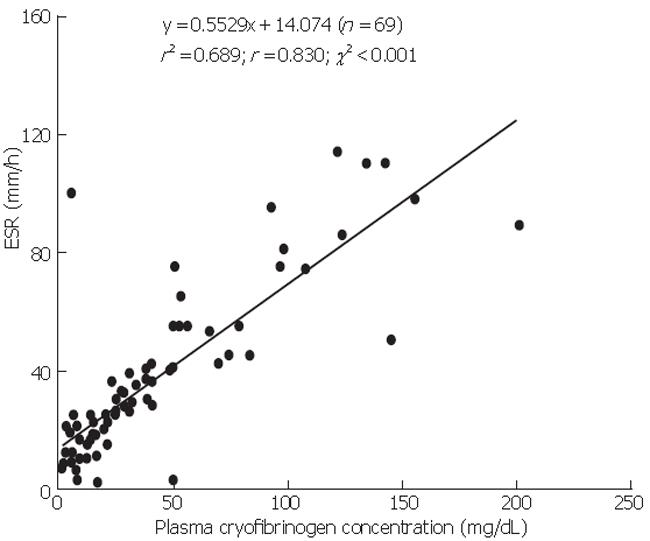 Relationship between TI-ab and CF

It is thought that in the plasma, part of the CF complex acts as TI-ab and at 37°C (the measurement temperature used in this study) and TI-ab dissociates from CF. Accordingly, TI-ab shown in both Figures 3 and 4 are believed to come from the CF complex. This means that a high plasma level of CF can reduce plasma levels of free TI. Figure 4 shows a simple regression analysis for the relationship between plasma CF and TI-ab in patients with active inflammatory bowel disease. As shown, there was a positive correlation between TI-ab and CF in the plasma (r = 0.74, χ2 = 01). 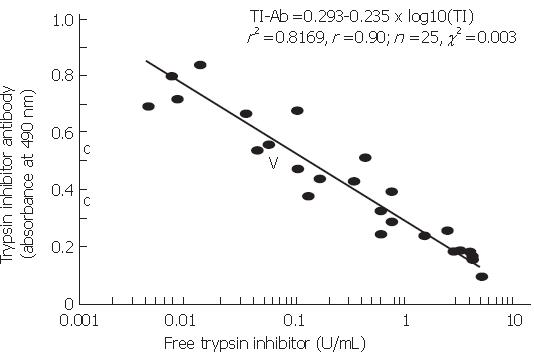 Figure 3 Logistic regression analysis to determine the relationship between TI and anti-TI-ab in patients with IBD. 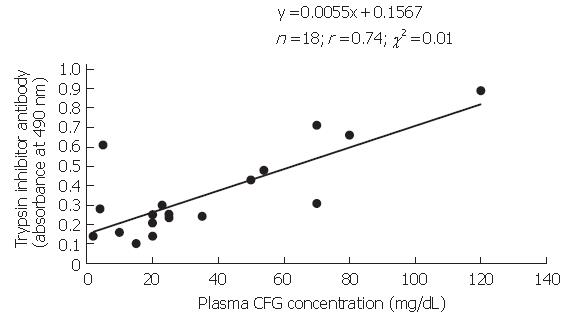 Figure 4 Simple regression analysis for the relationship between plasma CF concentration and TI-ab in 18 patients with active IBD.
DISCUSSION

Given that high plasma CF is seen during active IBD, and increases with IBD severity, the fundamental question if unequivocally addressed could significantly improve our understanding of the role of CF in IBD and the aetiology of IBD. First, is CF one cause or a consequence of active IBD? Second, exactly how CF contributes to active IBD (if at all)? At present, our data suggest that CF quenches TI thus depriving the immune system of an important natural anti-inflammatory factor (see the introduction section). But we should not forget that CF by precipitating cryoprotein aggregates is a major risk factor for vascular occlusion and impaired microvascular perfusion, which in IBD can delay ulcer healing.[3-8,20,25,26] Additionally, high plasma concentration of CF can activate platelets in the same way as high plasma fibrinogen does[24] and block small vessels with micro-thrombi whereby compromising microcirculatory blood flow within the inflamed intestinal mucosa. Therefore, one mechanism of action of CF and its contribution to tissue injury and the perpetuation of IBD might be via vascular occlusion.

There are reports that treatment with immunosuppressive agents including corticosteroids, azathioprine, and cyclophosphamide is unsuccessful in preventing disease progression (non-IBD)[25-27]. However, the introduction of regular plasmapheresis together with cyclophosphamide therapy depletes plasma CF and this is associated with a marked improvement in the patients’ clinical symptoms, Suggesting that extracorporeal circulation therapies such as plasma exchange and plasmapheresis, or cryofiltration[28-30] combined with conventional drug therapy may be effective in patients with refractory UC or CD who present with high plasma concentrations of CF, which we believe is a morbigenous factor in IBD.

Excess CF probably arises either from a misdirected synthesis or from post-synthetic alterations.[25,30,3] In IBD, it is likely that abnormal fibrinogen (CF) reflects a congenital abnormal production or an acquired abnormal production by the liver that is exposed to high cytokinaemia and proteases through portal vein from the intestine. If the elevated CF is caused by pro-inflammatory cytokines and proteases then its concentration in the inflamed intestinal lesions will be much higher compared with plasma.

In conclusion, high plasma CF in patients with active IBD appears to be morbigenous. The elevated plasma CF does not seem to be associated with typical acute phase reactants like CRP and WBC but showing strong correlation with ESR. Currently, our impression is that elevated CF promotes IBD via two main mechanisms quenching of TI (an anti-inflammatory substance) and impaired microvascular perfusion by forming protein aggregates. Further, CF may also serve as a new biomarker of chronic IBD. Clearly additional studies are warranted to fully evaluate the role of CF in IBD and the outcome should contribute to a better understanding of IBD aetiology.