AIM: To assess the early predictability of the soluble CD40L (sCD40L) in pancreatitis severity.

CONCLUSION: These findings indicate that CRP remains a valuable marker to determine the severity and prognosis of acute pancreatitis whereas sCD40L levels should be assessed in further studies.

Acute pancreatitis (AP) is a disease of variable severity. While approximately 80% of patients experience mild attacks, the remaining 20% still suffer from severe disease, with a mortality rate as high as 30%[1,2]. Since treatment of patients with severe disease is currently mostly supportive and directs at either prevention or control of the local and systemic complications, the early prediction of the severity of AP is the main goal of clinicians in charge of such patients[2]. Multifactorial scales including Ranson and APACHE II scoring systems have been used in acute pancreatitis since the 1980s. Ranson scale has been used in the 1980s in virtually all studies dealing with acute pancreatitis[3,4]. The list of 11 numerical parameters proposed by Ranson has no been fully discussed because only 5 criteria are obtained at admission and the remaining 6 during the subsequent 48 hour period, delay the performance of an early prediction. Moreover, the complexity of these scales and perhaps the fact that CT scanners are not available in every hospital account for the increasing interest in serum markers[5].

The pathophysiology of acute pancreatitis includes the activation and release of pancreatic enzymes in the interstitium, pancreatic autodigestion, and a multiple organ dysfunction following the release of these enzymes into the systemic circulation[6,7]. There is evidence that synthesis and release of pro-inflammatory cytokines and chemokines are also responsible for local and distant injuries[8,9]. If the concentration of these biological factors is correlated to the severity of the disease and if they are detected before the occurrence of multiple organ dysfunction, these factors might be important for the rapid scoring of the disease severity in the acute phase[5].

CD40, a proteic member of the tumour necrosis factor receptor family, is expressed on the membrane of a variety of cells, including B lymphocytes, monocytes, biliary and acinar cells as recently shown by our group[7,10]. CD40 binds to its ligand CD40L, a membrane glycoprotein, to mediate major immunoregulatory signals involved in auto-immune disease, graft rejection, inflammatory bowel disease, development of atherosclerosis and acute experimental pancreatitis[11]. We postulated that CD40-CD40L interactions might also play a role in the pathogenesis of human pancreatitis and that the soluble form of CD40L (sCD40L) levels might be correlated to the severity of the disease. The purpose of this study was to assess the early predictability of sCD40L in pancreatitis severity.

The study protocol was approved by the local Ethics Committee. Upon admission, all patients with acute pancreatitis meeting the criteria of inclusion were identified and proposed to be included in the study. Before inclusion, each patient gave an informed consent. Between February 2000 and February 2003, 279 consecutive patients with acute pancreatitis were prospectively enrolled in our study. We assessed the role of sCD40L in the prediction of the severity of pancreatitis in this preliminary study. Consequently, 40 patients with mild and 40 patients with severe pancreatitis were randomly evaluated in the current study (Table 1). Ten healthy controls from our own divisions were also used for comparison. Inclusion criteria were typical abdominal pain associated with serum amylase twice the upper limit value (range: 26-128 U/L). The diagnosis was subsequently confirmed by CT scan with a Picker 1200 or a PQ-2000 instrument. Before scanning 150 ml of diluted oral contrast material (Telebrix Gastro, France) was administered to visualize the gastrointestinal tract. Intravenous contrast material (Omnipaque 350, Shering, Germany) was injected and multiple scans were obtained from the pancreas to the pelvis as previously described[12]. Pancreatic necrosis was considered significant if there was > 30% necrosis of the gland. Pancreatitis severity was defined according to the Atlanta classification and included organ failure (e.g.,shock, pulmonary insufficiency, renal failure), the presence of local complications (pancreatic necrosis, pseudocysts, abscess), or both[13]. Blood samples drawn 48 hours after admission were used to measure CRP and sCD40L using commercially available kits (Behring, Marburg, Germany and Bender MedSystems Vienna, Austria).

Serum markers were compared during severe and mild attacks by univariate analysis (Student’t-test, Mann-Whitney). SCD40L, CRP and Ranson scores were evaluated by receiver operating characteristics (ROC) curves for selected sCD40L and historically determined (CRP and Ranson) cutoff levels[3,4,5]. The cutoff for CRP (150 mg/L) and Ranson (severe > 3) was chosen according to the literature[4,5]. The cutoff for sCD40L was chosen according to its ROC curve. A logistic regression analysis for the binary outcome of mild or severe pancreatitis was performed. P < 0.05 was considered statistically significant. Statistics calculations were done using SPSS Software package (Chicago, USA).

CT scan was obtained within 36 hours after admission in each patient and showed a normal pancreas in 5 patients, edema in 47 patients and necrosis in 28 patients (Table 1). Acute fluid collections were found in 35 patients (43 %) (Table1). The Ranson score established at 48 hours was ≥ 3 in 27 patients (33 %), 19 of whom had severe pancreatitis and 8 mild pancreatitis. Sensitivity, specificity, positive predictive value, and negative predictive value of Ranson score to predict a severe attack were 48% and 80%, and 70% and 60% respectively (Table 2). Three patients group with severe pancreatitis (7.5 %) died, two of whom were of biliary origin (Table 1). 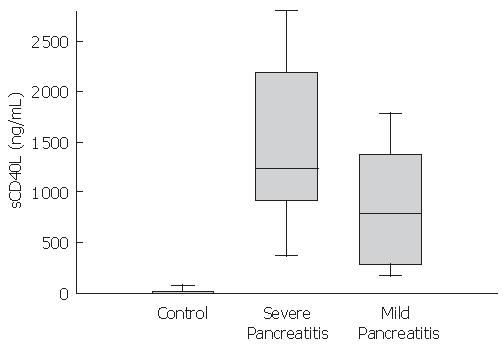 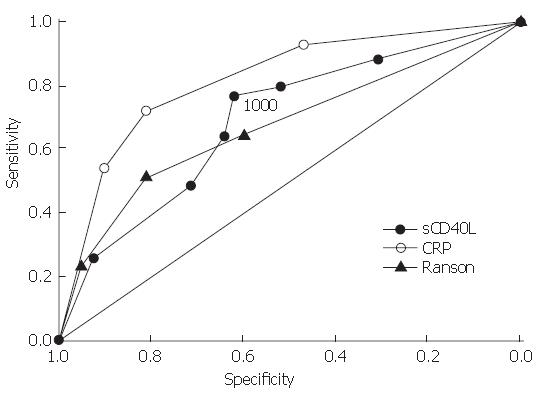 Predicting the course of acute pancreatitis remains a challenge for the physician[2]. Moreover, the 48-hour delay necessary to collect the standard scores and the complexity of multifactorial scales have prompted many physicians to investigate new markers[5]. CRP is an acute phase protein produced by the liver during inflammatory conditions that was first described in 1930[3]. In the mid-1980s, several studies showed that CRP could be considered as a valuable prognostic factor for severe pancreatitis[3,5,14]. Indeed, a better understanding of the pathophysiology of acute pancreatitis may contribute to a better selection of a specific prognostic marker. To this end, CD40-CD40L interaction, a major pro-inflammatory system widely distributed on a variety of leukocytes, has been recently studied in experimental rodent pancreatitis[7]. The expression of CD40 and its ligand were detected on pancreatic acinar cell surface, and peripheral T lymphocytes showed a progressive increase in the expression of CD40L during the course of experimental pancreatitis. Taken together, we thought that these findings might be applied to human pancreatitis. In the current report where 40 patients with mild and 40 patients with severe pancreatitis were randomly evaluated, we showed for the first time that the levels of the soluble form of CD40L (sCD40L) were higher in severe than in mild pancreatitis 48 hours after admission. The usefulness of this potential new marker has been compared to CRP, the most widely accepted serum marker that is used on a daily routine in almost all hospitals[3,7] and to Ranson score. We found that the sensitivity of sCD40L to predict a severe course was better than that by CRP. The negative predictive value of sCD40L that allows the physician to really exclude a severe disease was superior than that by CRP. A marker characterized by a better negative predictive allows cost savings since it can avoid useless observation time in emergency room or intensive care unit[15,16]. However, logistic regression analysis found that CRP was the only statistically significant marker able to identify a patient who developed a severe course of the disease. One explanation for this result is that our study was limited by the small number of patients evaluated. Consequently, correlation between the levels of sCD40L and the occurrence of complications or death for example could not be studied.

Of note, Ranson score appeared insufficiently predictive of severe attacks, a feature already reported in several previous prospective studies[14,17,18]. To predict the severity of pancreatic disease itself, before the occurrence of multiple organ dysfunction, numerous other factors besides CRP have been evaluated so far with various performances. These factors are either enzymes released from the pancreas such as trypsinogen activation peptide[16] or mediators induced by inflammation in the pancreas itself or in remote organs such as procalcitonin[19], adhesion molecules[20] or cytokines[21]. For most of them, the higher the blood concentrations of these enzymes or mediators are, the more severe the disease is. Soluble CD40L could be one of the next markers of pancreatitis severity but further larger studies are needed to validate its clinical use in the early assessment of pancreatitis severity.