AIM: To investigate the role of mangafodipir trisodium (MnDPDP) in focal pancreatic masses and mass-like lesions by evaluating contrast uptake features of the lesions and pancreatic parenchyma after contrast medium injection.

METHODS: A total of 37 patients with pancreatic mass or mass-like lesions were examined by unenhanced and MnDPDP-enhanced magnetic resonance imaging (MRI).

CONCLUSION: MnDPDP contrast-enhanced MRI, especially in cases with no parenchyma atrophy, can distinguish focal pancreatic lesion margins. Information about the function of pancreatic parenchyma can be obtained out of tumor. MnDPDP facilitates staging of pancreatic tumors by detection of metastatic lesions in the liver. In addition, diminished hetergenous uptake of MnDPDP in patients with pancreatitis may be helpful in differential diagnosis.

The relation of tumor with its surrounding structures can be described by cross-sectional techniques such as ultrasonography (US), CT and MRI. Ultrasonography has been proved as a first screening mode to depict the panceatic head and duct, the common bile duct and major vessels, but its value is limited by air in the digestive tract and its operator. Contrast enhanced triphasic spiral CT has an accuracy of only 70% for local staging[2]. Surgical procedures are therefore sometimes needed for diagnostic purposes[3,4]. Consequently there is a need for imaging methods with a higher sensitivity and specifity for identifying and staging pancreatic lesions to diminish the number of unnecessary laparotomies.

MnDPDP (Teslascan, Amersham, GE Heralth Care) is an organ-specific paramagnetic contrast agent that has been developed for imaging of the hepatobiliary system. Significant tissue uptake is seen mainly in the liver but much less in the renal cortex, adrenal glands, pancreas and other abdominal organs[5-7]. MnDPDP enables to get images with a higher signal-to-noise (S/N) ratio[8].

Pancreatic mass lesions or suspicious mass were determined in 37 patients (24 men, 13 women) with a mean age of 58.1 years (range 23-83 years) by US and CT. All patients underwent MnDPDP-enhanced and unenhanced MRI. The patients who received any contrast agent within 1 h before MnDPDP-enhanced MRI or had obstructive hepatobiliary disease or biliary stasis or severe renal impairment, or were contraindicative for CT or MRI or previously enrolled into this study, or defined as pregnancy or lactation, were excluded. The study was approved by the local ethical committee.

MnDPDP was injected intravenously at a dosage of 10 μmol/kg (2-3 mL/min) for 15 minutes. Postcontrast imaging was obtained using the same protocol and sequences (except for T2 weighted fast SE sequence) approximately 30 minutes after contrast administration. After contrast medium injection, the size, number, appearance, characteristics of the lesions were compared with normal pancreatic parenchyma. Also contrast uptake level in the lesions and pancreatic parenchyma were evaluated.

Diagnosis of all patients was confirmed by radiological, clinical and histopathological examination (Table 1). Twenty-three of the 37 patients underwent surgical intervention and percutaneous biopsy was performed in 5 patients with primary or metastatic lesions. In the remaining 9 patients, diagnosis was confirmed by clinical and radiological follow-up. Twenty-four patients with pancreatic carcinoma underwent MnDPDP-enhanced abdominal MRI. In 22 of 24 patients, contrast medium uptake in the mass lesions was not determined (Figure 1). Minimal heterogeneous contrast enhancement was seen in one of the 2 patients with contrast-enhanced masses and contrast enhancement of the septa was observed in the other patient with mucinous cystadenocarcinoma (Figure 2).

Figure 1 T1-weighted axial SE contrast-unenhanced (A) and MnDPDP-enhanced (B) images of pancreatic adenocarcinoma with liver metastases. MnDPDP enhancement was not determined in the lesion while the normal parenchyma of the pancreas showed homogeneous contrast enhancement. MnDPDP- enhanced image showed the better delination of the tumor (thick arrows). Tiny liver metastases (thin arrows) were not determined on unenhanced MR image but on MnDPDP-enhanced MRI. 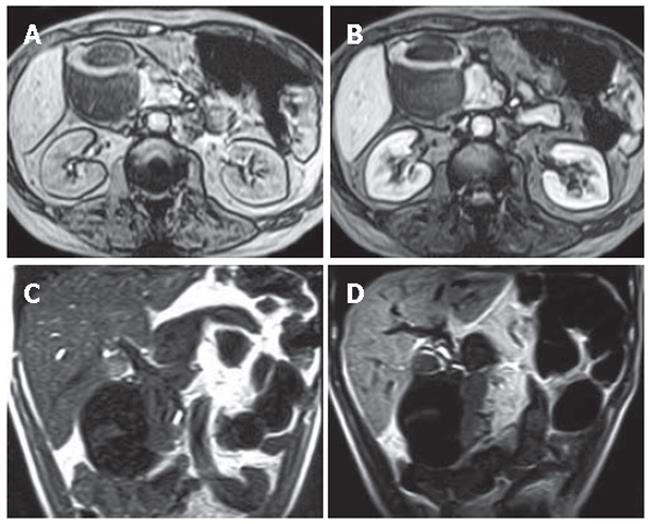 Figure 4 Unenhanced (A) and MnDPDP-enhanced (B) axial T1-weighted SE images showing better delineation of the tumor after MnDPDP infusion.
DISCUSSION

Tumor-forming pancreatitis, also known as pseudotumorous pancreatitis or inflammatory pancreatic mass, is presented as a mass-like glandular enlargement. Focal enlargement of the pancreas typically involving head of the pancreas and common bile duct may occur, simulating the development of malignant neoplasms. Since the signal intensity and nonspecific contrast enhancement patterns of this tumor are similar to those of malignant tumor, their differential diagnosis is usually diffucult[16]. In our study, minimal heterogeneous contrast enhancement was observed in 3 patients with local pancreatitis by MnDPDP-enhanced MRI.

MnDPDP is used as an organ specific contrast agent orginally designed for liver imaging. Since the agent is taken up by hepatocytes, increased contrast between normal liver parenchyma and metastatic liver lesions can be achieved. MnDPDP facilitates staging of pancreatic tumors by providing easily detection of metastatic lesions to the liver. MnDPDP may improve the staging of pancreatic cancer by increasing the sensitivity of MRI in the detection of liver metastases. MnDPDP-enhanced MRI can improve the accuracy of detection ratio and staging of focal pancreatic lesions, and is a safe and well tolerated noninvasive diagnostic method.