We report on a case of gossypiboma. A 78-year-old man was admitted to our hospital with acute abdomen. He had undergone an operation for colon cancer 4 mo previously. Abdominal ultrasonography revealed an echogenic lesion with a hypoechoic rim and strong posterior acoustic shadowing in the lower abdomen. Diagnosis of gossypiboma can be made by ultrasonography to avoid loss-of-chance of survival. We reviewed the English literature briefly of gossypiboma from the medical and juridical view. According to the theory of loss-of-chance, the damage of plaintiff is the loss of the chance of survival or recovery, rather than the final harm. The victim would allow recovery for the loss of the chance from the defendant. But the plaintiff would show by a preponderance that he was deprived of a betterchance of a cure. Under the proposed rule, the compensable value of the victim would be the plaintiff’s compensation for the loss of the victim’s chance of survival.

Retained gauzes in the abdominal cavity are infrequent nowadays, but they present a diagnostic problem even if radiopaque threads and gauze double counts are used in the operation room[1]. It can cause loss-of-chance of survival or recovery.

We will present an acute abdomen occurring 4 mo after a gauze was left in the abdomen. Ultrasound examinations proved helpful, and they are described in this report.

A 78-year-old man with a history of previous operation for colon cancer was admitted with the chief complaints of acute epigastric pain for several days. He was rather well until several days before this admission when he experienced acute epigastric pain and poor appetite intermittently. On arrival, his consciousness was clear and vital signs were stable (blood pressure: 120/60 mmHg, pulse rate: 72/min, respiratory rate: 18/min, and body temperature: 36.5 °C). Physical examination revealed no abdominal mass was felt. Results of rectal examination were normal. An ultrasound scan of the abdomen revealed an echogenic lesion with a hypoechoic rim and strong posterior acoustic shadowing in the lower abdomen (Figure 1). A plain x-ray of the abdomen revealed a long and fine opacity over the right lower quadrant abdomen, some mottled small air densities were superimposed on this area (Figure 2). Under the impression of intraabdominal abscess, exploratory laparotomy was performed. At laparotomy there was a focal abscess in the right lower quadrant abdomen containing a laparotomy gauze. The abscess cavity was irrigated and the retained gauze was resected. The abdomen was drained and closed. The postoperative period was uneventful. 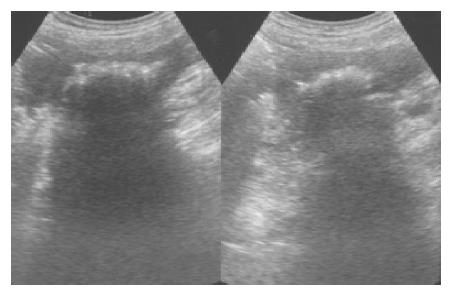 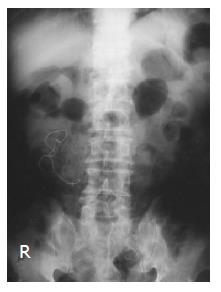 Figure 2 Plain roentgenogram of abdomen after abdominal sonogram. Notice serpentine linear opacity over the right portion of abdomen, some mottled hyperdensities are adjacent to this linear opacity- all diagnostic features of a retained gauze.
DISCUSSION

Radiopaque threads impregnated into surgical gauzes were first introduced by Cahn in 1929, but were not come into general use in the United States until about 1940[2]. A retained gauze left in the abdomen must be considered in the differential diagnosis of patients with a history of laparotomy, and thus one needs a careful review of the patient’s past history. During the first two months of retained gauze, there was a little reaction, death being unrelated to the presence of the gauze. From 2 mo to 2 years, infective inflammation and abscess were found. During that period, extrusion of the gauze occurred through an externally fistulous tract or internally into the rectum, vagina, bladder, or intestinal lumen[3].

There are surgeons who recommend the routine postoperative abdominal film after abdominal operation[4]. On abdominal films, a whirl-like appearance is characteristic of retained gauzes. This appearance is considered to be due to gas trapped in the fibers of the gauze[5]. The ultrasound is very useful in the diagnosis of abdominal retained gauze[6]. The ultrasound feature is usually a well-delineated mass containing wavy internal echo with a hypoechoic rim and a strong posterior acoustic shadowing[7]. Ultrasonography images can be classified into two groups, a cystic type and a solid type. The former showed a cystic lesion with zigzag echogenic bundle. The latter showed a complex mass with hyper- and hypoechoic regions. A postoperative diagnosis of retained gauze can be made from the characteristic appearance on ultrasonography images. This can avoid delayed diagnosis and medical errors.

A doctor may negligently fail to diagnoses a preexisting disease, allowing it to progress, with harmful effects. The disease was obviously a cause of harm. The doctor’s negligence in allowing the disease to progress may also have caused the harm. In assessing the value of that loss-of-chance of gossypiboma, the disease should be deemed a preexisting condition and be taken into account. To illustrate, consider the case in which a doctor negligently fails to diagnose a patient’s cancerous condition until it has become inoperable. Assume further that even with a timely diagnosis the patient would have had only a 30% chance of recovering from the disease. A rational approach would allow recovery from the loss of the chance of cure even though the chance was not better than even. While the plaintiff here could not prove by a preponderance of the evidence that he was denied a cure by the defendant’s negligence, he would show by a preponderance that he was deprived of a 30% chance of a cure.

In our case, the preexisting condition and the effect of the doctor’s tortuous conduct attach within a relatively short time, the burden of providing the extent to which the preexisting condition reduced the value of the interest in question should be shifted to the doctor. Shifting the burden of proof is not a completely satisfactory solution, this shift simply realigns the scale[8,9].