METHODS: In this case report, we describe the course of Clostridium difficile-associated diarrhea in an 82-year-old patient developing acute renal failure. Stopping the offending agent and symptomatic therapy brought a rapid improvement of diarrhea and acute renal failure, full recovery was gained 18 d after admission. In a systematic review we looked for links between the two conditions.

An 82-year-old man presented, in poor but stable general condition, to the local emergency department of a tertiary care university hospital with typical signs of gastroenteritis lasting for 5 d. His medical history included non-insulin- dependent diabetes mellitus since 10 years, two myocardial infarctions 1 year ago, cerebrovascular occlusive disease treated with carotid endarterectomy 2 years ago and pulmonary embolism 4 years ago. Initially, he had presented to his general practitioner with abdominal pain lasting for a few days. Considering his complex medical history his general practitioner put him on amoxicillin/clavulanate potassium. Because the symptoms did not improve during the following days and his general condition started to deteriorate, the patient called the ambulance and he was brought to the hospital. On examination the patient’s blood-pressure was 115/85 mmHg (15/11 kPa), his pulse rate 60 beats/min, he was dehydrated but afebrile. Laboratory examinations showed highly elevated plasma urea (41 mmol/L, normal range 2.5-6.7 mmol/L) and creatinine levels (1149.2 µmol/L, normal range 70-150 µmol/L) (Figure 1). Serum levels of electrolytes, white blood cell count and CRP were within normal range (CRP under 1 mg/dL, WBC 4.3-10.8×109/L) (Figure 2), and fibrinogen was only slightly increased (6 g/L, normal range 1.80-3.90 g/L). Prerenal acute renal failure was assumed as primary working diagnosis because of dehydration due to prolonged diarrhea and the patient’s long-term therapy with furosemide. Diuretics were stopped; under continuous intravenous and oral fluid replacement the patient’s general condition improved. Prior to referral to a medical ward, stool cultures were requested. During the following days white blood cell count and acute phase proteins increased, indicating an ongoing infection. Chest x-rays showed no signs of pneumonia and blood cultures did not reveal bacteremia. Stool specimen was positive for Clostridium difficile. The patient was started on intravenous metronidazole 1.5 g/d. Three days after onset of specific therapy, inflammatory markers reached maximum levels (WBC 12 g/L, CRP 6 mg/dL) and decreased in the further course (Figure 2), while plasma urea and creatinine levels returned to normal (Figure 1). Clostridium difficile toxins could not be detected in any subsequent stool samples. Fully recovered, the patient could be discharged from hospital, 18 d after initial presentation. 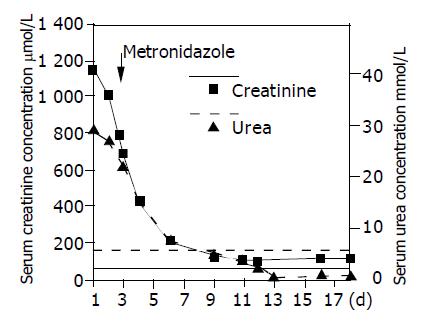 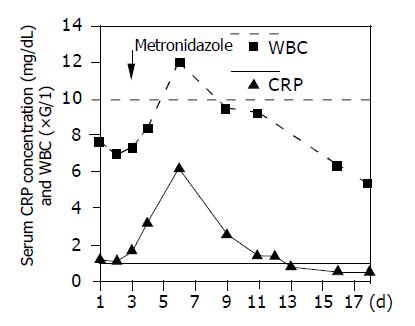 Considering the high prevalence of Clostridium difficile infections in the hospital setting, our patient may have been infected during a previous hospital stay. But an acquisition of infection out of hospital is not excluded. Because of his old age and his comorbidities including non-insulin-dependent diabetes mellitus, ischaemic heart disease, cerebrovascular occlusive disease and pulmonary embolism, he certainly was at risk to develop Clostridium difficile-associated diarrhea as well as acute renal failure. Antibiotic-associated diarrhea as a common course of infection with Clostridium difficile has a broad spectrum of clinical manifestations ranging from mild diarrhea to pseudomembranous colitis and fulminant colitis[5]. The risk factors that could be identified as associated with severe disease (defined by a hospital stay of greater than 14 d, colectomy, intensive care unit admission or death of patient) were age over 70 years, comorbid illnesses, and recurrence of Clostridium difficile-associated diarrhea[6]. Acute renal failure is characterized by an abrupt decline in renal function resulting in an inability to excrete metabolic wastes and maintain proper fluid and electrolyte imbalance[7]. Prerenal acute renal failure together with intrarenal acute renal failure due to ischaemia and nephrotoxins are responsible for most episodes of acute renal failure[8]. Common causes of prerenal failure are volume depletion as a result of diarrhea, reduced fluid intake, fever, diuretics, or heart failure. Elderly patients are particularly susceptible to prerenal failure because of their predisposition to hypovolaemia and high prevalence of renal-artery atherosclerotic disease[9].

Developments of the diagnosis of Clostridium difficile-associated diarrhea

The diagnosis of Clostridium difficile-associated diarrhea was confirmed by ELISA testing for enterotoxin A and B. The diagnosis of an infection with Clostridium difficile can be made either by testing for toxin A or B (ELISA and cytotoxin assay), bacterial enzymes (Latex agglutination test) or by bacterial culture. Bacterial culture is highly sensitive and allows bacterial strain typing, but also takes 2-5 d to perform[5]. Latex agglutination tests are fast and inexpensive and have improved in sensitivity in the past few years[10].

For our patient, intravenous and oral fluid replacement therapy in addition to the appropriate antibiotic agent brought a rapid improvement in his condition. In fact both diseases share the same principles of nonspecific treatment (Table 1, Table 2). Reversing the underlying cause is the first and most beneficial measure. In Clostridium difficile infection it is discontinuation of offending antibiotic treatment, in acute renal failure it may be stopping a nephrotoxic agent or treating diarrhea. Further important measures in both diseases are replacing intravascular volume and correcting electrolyte abnormalities.

In our case, amoxicillin/clavulanate potassium seemed to have initiated deterioration of first mild gastrointestinal symptoms. The development of Clostridium difficile-associated diarrhea and pseudomembranous colitis, however, is not restricted to certain antibiotics. The ones that are most frequently associated are ampicillin, cephalosporins and clindamycin. If patients require antibiotics, another way of treating them is changing to an agent that has less frequently been associated with the disease[5]. First line agents for the treatment of symptomatic Clostridium difficile infection include oral vancomycin or metronidazole. A recent study, investigating resistance of Clostridium difficile strains to different antibiotics found no evidence that the most common human strains were resistant to vancomycin or metronidazole while all strains were resistant to cefoxitin and most strains resistant to ceftriaxon[11].

In conclusion, our patient presented with a course of Clostridium difficile-associated diarrhea followed by acute renal failure. Under continuous volume replacement therapy and specific antibiotics the patient’s general condition improved, inflammatory markers, serum urea and creatinine rapidly returned to normal and the patient could be discharged after full recovery 18 d after admission. Both acute renal failure and Clostridium difficile-associated diarrhea are potentially life-threatening diseases in the elderly but may be reversed using appropriate therapy. Keeping in mind a possible direct link between these two serious diseases, this report once more stresses the need for rapid diagnosis and specific treatment, especially in the elderly, to prevent fatal outcome.