Here, we report two cases of patients with severe, non-spherocytic hemolytic anemia caused by hereditary pyruvate kinase deficiency (PKD). The chronic hemolysis led to secondary hepatocellular iron overload and subsequently liver cirrhosis. These results suggest a consequent control of the iron metabolism and the liver function in patients with PK deficiency and, if necessary, an iron reducing therapy.

A 56-year-old male patient (patient 1) with severe abdominal pain, fever, nausea and emesis was admitted to the emergency room. In addition, the patient had stigmata of chronic liver disease such as icterus, spider naevi, dilated abdominal subcutaneous veins and ascites. The clinical picture and an abdominal ultrasound examination suggested advanced liver cirrhosis and acute cholecystitis in the presence of gallstones. Laboratory parameters at admission confirmed severe inflammation. A significant iron overload, as indicated by high serum iron and ferritin and siderinuria, was found. Bilirubin was high and the liver function parameters (cholinesterase, prothrombin time and albumin) were significantly altered. However, further differentiation of the elevated bilirubin revealed that the major proportion was indirect bilirubin (>70%). In conjunction with an elevated lactat-dehydrogenase (LDH 450 U/L) this was suggestive for hemolysis. Concomitantly, the patient had anemia (hemoglobin 9.4 mg/dL) with significantly stimulated erythropoiesis, as demonstrated by the elevated reticulocyte count of 21% (Table 1).

The patient reported the first onset of icterus at the age of 12. At that time the spleen was removed and he had significant and long-term improvement of the clinical situation. Importantly, the patient revealed a positive family history with a brother (patient 2) who suffered from chronic hemolysis as well. Therefore, further efforts attempting to clarify the etiology of the hemolytic anemia focused on the hereditary hemolytic syndromes. Normal hemoglobin electrophoresis and negative testing for sickle cell disease excluded hemoglobin abnormalities and no sphero or elliptocytosis was found. Osmotic resistance of the red blood cells was normal. However, examination of intracellular erythrocyte enzymes revealed a massively decreased activity of pyruvate kinase (3.5 U/1011 erythrocytes; normal: 17.1-26.5), while the activities of glucose-6-phosphate dehydrogenase, hexokinase and glutation reductase were normal. This finding led to the diagnosis of hereditary PKD.

After the antibiotic pretreatment, open cholecystectomy was performed. The gallbladder was severely inflamed and the intraoperative inspection and palpation of the liver were suggestive for liver cirrhosis. The liver was biopsied and histology confirmed advanced periportal bridging. Furthermore, a severe iron overload of hepatocytes and biliary epithelial cells was present, suggestive for genetic hemochromatosis (Figure 1). However, analysis of the HFE-genotype revealed no mutations and other chronic liver diseases, such as alcohol, viral, or autoimmune-related hepatitis and biliary diseases were excluded. Since a causal treatment of PKD is at present not available, an iron-chelating therapy with subcutaneous administration of desferrioxamine twice a day[2] was initiated. Despite a significant stabilization of the clinical condition under therapy (no ascites was found in follow-up visits after 3, 6 and 12 mo) and in view of the advanced stage of the liver cirrhosis (Child-Pugh Score 9), the patient was evaluated and recommended for liver transplantation. Unfortunately, he refused transplantation and conservative therapy with desferrioxamine was continued. Unexpectedly, liver function is to date stable for more than 3 years. 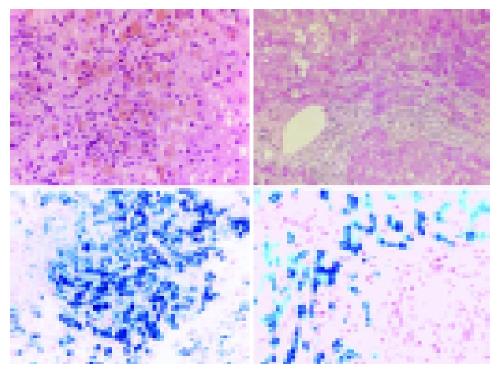 Figure 1 Liver histology of two patients with hereditary corpuscular hemolysis. Liver biopsies from patient 1 and 2 were fixed in formaldehyde and embedded in paraffin following standard protocols. Sections of 4-µm thickness were stained either with hematoxylin–eosin (HE-stain) or Perls Prussian Blue. Hepatic iron deposition was graded according to DiBisceglie.
Case 2

The diagnosis of PKD prompted us to examine the younger brother of the patient, who had a very similar medical history of the development of icterus and concomitant splenectomy during childhood. His actual laboratory parameters are shown in Table 1 (patient 2). The bilirubin elevation in this patient was caused solely by hemolysis, since direct bilirubin proportion was within the normal range (0.7 mg/dL). Correspondingly, all other hemolysis parameters were elevated and erythropoiesis was significantly stimulated (reticulocyte count of 22‰). Pyruvate kinase activity was even lower in this patient than in the older brother. The definitive confirmation of the congenital defect in both patients was now performed by sequence analysis of the pyruvate kinase gene within chromosome 5. A mutation of a single base at position 1529 within exon 11 of this gene, with substitution of guanine (G) by adenosin (A) was evident (Figure 2). On the amino acid level this mutation could cause an exchange of arginine 510 into glutamate. This patient also had elevated liver enzymes but, in contrast to the older brother, he had no clinical signs of cirrhosis and his liver function was completely normal. There was no evidence for alcoholtoxic, viral or autoimmune hepatitis or an underlying biliary disease. However, iron metabolism parameters with high serum iron and ferritin were in a similar range as in his older brother, indicating massive iron overload. Liver biopsy confirmed the severe hepatocellular iron overload, and revealed furthermore advanced periportal bridging (Figure 1). This patient showed a markedly reduced ejection fraction in echocardiography, indicating iron-induced toxic cardiomyopathy. An iron chelating therapy with desferrioxamine was initiated and complemented by phlebotomy with a bimonthly withdrawal of 500-mL blood. In both patients, the iron reducing therapy led to a significant reduction of iron and ferritin over the next 12 mo (Figure 3). 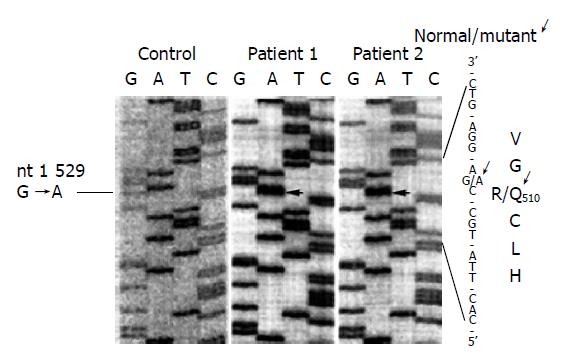 Figure 2 Partial sequence analysis of the pyruvate kinase gene (exon 11) in the patients described. Genomic DNA was prepared from peripheral blood mononuclear cells (PBMC) and sequenced according to standard protocols, applying [α35S] dATP during the termination reaction and subsequent fluorography. 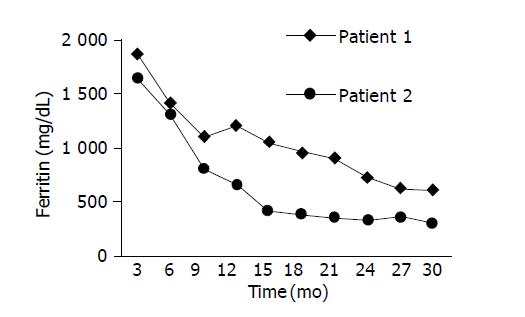 Figure 3 Decrease of iron overload in the patients under desferrioxamine therapy. Iron metabolism was assessed by serum ferritin concentration over a period of time of 30 mo.
DISCUSSION

The diagnosis of PKD in both cases was confirmed by sequence analysis of the PK gene, which revealed a single nucleotide mutation (G to A) in the PK gene within exon 11 at position 1 529. Together with the glucose-6-phosphate-dehydrogenase (G6PD) deficiency, PK deficiency is the most common type of hereditary enzyme defect within the glycolytic pathway causing nonspherocytic anemia[3,4]. The point mutation detected in our 2 patients (G1529A) is one of the most frequent mutations within the western European population[5-7]. The remaining activity of PK in patients carrying this mutation has been reported to be 10-25% and reticulocytosis varies from 5% to 66%[7]. The disease shows a broad range of clinical severity, which is loosely correlated to the impairment of hematological parameters: The lower the residual PK activity and the higher the reticulocyte count, the more the patients are affected[7,3]. Since PK catalyzes the final step within the glycolytic pathway (phosphoenol-pyruvate→pyruvate), a decreased activity results in alterations of the erythrocellular energy metabolism. Subsequently, the activity of the membrane associated sodium- potassium ATPase is impaired, leading to instability of red blood cells[8].

A main clinical feature in the two PKD patients, examined in this study, is a considerable iron overload. The iron overload is independent of transfusion therapy. In the liver tissue, the iron overload includes hepatocytes and even biliary epithelial cells. Since this histological pattern correlates to genetic hemochromatosis, the HLA phenotype and the commonly known mutations in the hereditary hemochromatosis (HFE)-gene (C282Y and H63D) were examined. The possibility of a coincidence of both diseases seems not unlikely, since 2-20% of the European population have mild alterations of the iron status associated with heterozygosity for the main hemochromatosis mutation (C282Y), while a much higher proportion carry the H63D mutation. A recent study revealed abnormalities of the HFE-gene in 35% of nontransfused patients with PKD and these abnormalities coincide with increased serum iron and ferritin[9]. However, in our patients heterozygosity for genetic hemochromatosis was ruled out by a normal HFE-genotype.

In addition to heterozygosity for hemochromatosis, splenectomy has been reported to be an independent risk factor for iron overload in hemolytic diseases[10,11]. While the increased iron turnover is the basis for the iron overload in PKD[9,12], it alone is not sufficient to cause iron accumulation in this disease[9,12]. Since both of our patients underwent splenectomy during childhood, this circumstance was considered as a main contribution to the significant iron overload they had. It is well accepted, that primary and secondary iron overloads have prefibrogenic effects within the liver tissue, by sustained induction of oxidative stress[13,14]. As in our patients, the level of the liver transaminases may only be marginally elevated, since the iron-induced chronic inflammation is often of very low activity, but nevertheless results in progressive fibrosis[13]. Independent of the pathogenesis, liver iron concentration must exceed a critical threshold, which has been suggested to be around 350-400 µmol/L/g, in order to cause hepatocellular damage[15,16]. Above this threshold, the secondary iron overload (e.g.,due to hemolytic disease) may have the same deleterious effects as the primary iron overload in genetic hemochromatosis.

Taken together, it becomes obvious that the clinical symptoms of the patients described in this study, are all based on the PKD in association with the splenectomy. Under this circumstance, chronic hemolysis is capable of causing significant iron overload, which in turn is responsible for the liver and cardiac disease of both patients. The pathophysiological importance of iron overload in these patients was also demonstrated by the effectiveness of the iron chelating therapy, which led to a significant decrease of serum ferritin and a stable liver function for more than 3 years. In addition to the iron overload, PKD-induced hemolysis is responsible for the abdominal symptoms of the elder patient (case 1). The chronic excess of bilirubin obviously altered the solvent properties of the bile, resulting in cholelithiasis, presumably consisting of bilirubin stones. The stones caused cholecystitis, perhaps combined with acute or chronic cholangitis. After cholecystectomy, these associated symptoms such as fever and abdominal pain relieved completely. Histological examination of gallbladder and the gallstones after surgery confirmed these clinical suspicions.

In summary, this study demonstrates that PKD-induced hemolysis in conjunction with splenectomy may cause severe iron overload even in the absence of HFE-genotype abnormalities. The secondary iron overload may lead to chronic liver disease and cirrhosis. Unfortunately, a sufficient causal therapy for PKD is at present not available, although new therapeutic strategies are under evaluation. The most promising gene therapeutic approaches may be either transplantation of heterologous hematopoietic stem cells[17] or the reinfusion of autologous stem cells after correction of the PK gene sequence in the stem cell DNA in vitro[18]. Until such therapies become available, we suggest a close monitoring of the iron metabolism of PKD patients and a consequent treatment of iron overload.