AIM: To investigate the expression of p57kip2 and its relationship with clinicopathology, PCNA and p53 in primary hepatocellular carcinoma (HCC).

METHODS: Expression of p57kip2, PCNA and p53 in tumor tissues from 32 patients with HCC and 10 liver tissues of normal persons was detected with Elivision immunohistochemical technique.

CONCLUSION: There is a marked loss or absence of p57kip2 expression and high expression of PCNA in HCC, which are involved in carcinogenesis and development of HCC. The p57kip2 and p53 may induce apoptosis via different mechanisms.

The damage of cell cycle is the crucial point in carcinogenesis and development of HCC. Orderly progression of cell cycle is controlled by the families of cyclins and cyclin-dependent kinas (CDKs), which are restrictively counterbalanced by CDK inhibitors (CDKIs). The p57kip2 was found by Matsuoka and located at 11p11.5, which is included in the CIP-KIP families. The structure of p57kip2 has partial homology with p21 and p27, which harbors homologous CDK binding domains or function of cyclin-CDK complexes and makes cell cycle to arrest in G1 phase[1]. The p57kip2 has the function of a tumor suppressor gene. The expression of PCNA has an intimate relationship with cell proliferation[2]. The p53 is an important gene to induce cell apoptosis and may have osculation with p57kip2 in function[3]. In this study, the expression of p57kip2, PCNA protein and p53 in tissues of HCC as detected with immunohistochemical Elivision technique to investigate the roles of p57kip2, PCNA and p53 in the genesis and progression of HCC.

Thirty-two specimens of HCC and 10 normal liver tissues as controls were collected from surgical resections performed in the First Hospital of Xi’an Jiaotong University from 2000 to 2002. Of the patients, 26 (81.25%) were males and 6 (18.75%) were females and the mean age was 49.19±12.32 years (range, 29-77 years). All the patients were confirmed to have HCC by the clinicopathological diagnosis. According to the histological grading, three were at grade I, 14 were at grade II, 11 were at grade III and 4 were at grade IV. All the specimens of HCC and normal liver tissues were fixed in 100 mL/L buffered formalin, processed routinely, embedded in paraffin and cut into 4-μm-thick sections, which were placed on poly-l-lysine-coated slides for immunohistochemistry. In each case, all available hematoxylin and eosin-stained sections were reviewed, and representative blocks were chosen for further studies. Anti-human p57kip2 monoclonal antibody (57P06), anti-human PCNA monoclonal antibody (PC10), anti-human p53 monoclonal antibody (MAB-0226) and Elivision kit were supplied by Maixin-Bio Co., Fuzhou, China.

Slides were deparaffinized in xylene twice for 10 min, dehydrated through graded ethanol to distilled water for 5 min, respectively. Endogenous peroxidase activity was blocked with 3% hydrogen peroxidase for 20 min. Slides were heated in 0.01 mol/L citrate buffer (pH 6.0) at a high temperature and high pressure for 7 min for antigen retrieval. After cooled to room temperature, the sections were incubated for 20 min in a blocking solution containing 10% normal goat serum in PBS [0.01 mol/L phosphate (pH 7.4)] and incubated with anti-human p57kip2 monoclonal antibody (work quality) in a humidified chamber at 4 °C overnight. While the sections with anti-human PCNA monoclonal antibody and anti-human p53 monoclonal antibody (1:50, Santa Cruz Biotechnology, CA, USA) were incubated for 1 h at 37 °C, incubated for 40 min with goat anti-rabbit IgG conjugated to horseradish peroxidase (Santa Cruz Biotechnology). The 3,3’-diaminobenzidine was used as chromogen for 3 min. Slides were counterstained for 2 min with hematoxylin solution and differentiated for 3 s with hydrochloric acid alcohol, then dehydrated and cover slipped. Normal liver tissue was regarded as a positive control, whereas the primary antibody was replaced by PBS as a negative control.

Fisher’s exact test and Spearman correlation (SPSS 11.0 for Windows) were adopted to assess the association between p57kip2 expression and clinicopathology, PCNA and p53. P<0.05 was considered statistically significant. 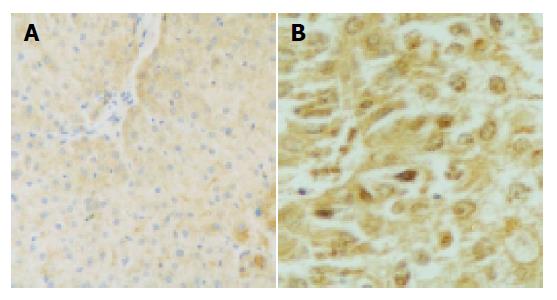 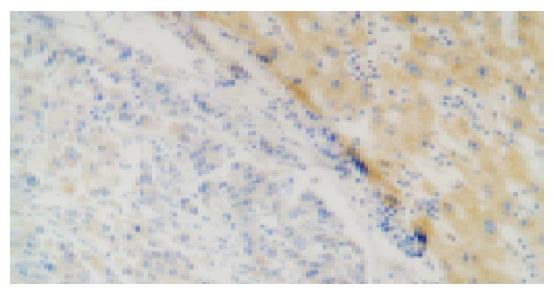 The p57kip2 protein positive-expression rate in moderate or poorly differentiated group was 20.0%, being lower than that (88.24%) in well-differentiated group (P = 0.007). In a word, the lower the cancer cells were differentiated, the higher the rate of p57kip2 protein was reduced. In addition, the reduced p57kip2 expression showed a significant relationship with higher clinical stages (stages III and IV, P = 0.041) and poor prognosis (<1 year, P = 0.036). However, no relationship was found between p57kip2 and age, level of AFP, tumor size and local metastasis (Table 1).

Relationship of p57kip2, PCNA and p53 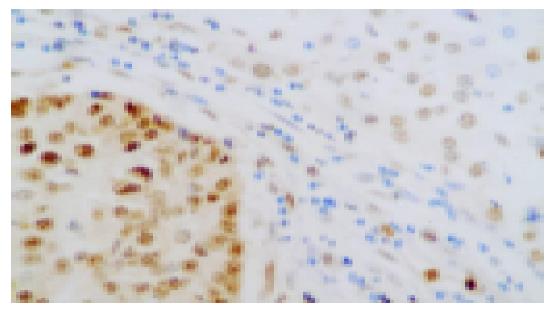 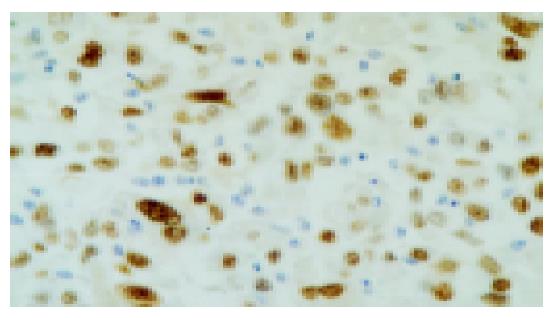 The G1-phase regulation of cell cycle was a complex process in which multiple factors took part, and abnormality of cell cycle regulation was significantly correlated with the genesis and progression of tumors[4].

The p57kip2 gene is located on chromosome 11p15.5 and p57kip2 protein is a cell cycle inhibitor with a molecular weight of 57 kDa, which is included in the CIP/KIP family and similar to p21 and p27 protein in functions. The p57kip2 contains three structural domains: N-terminal region bearing homology with CDK-inhibitors p21 (CIP1) and p27 (KIP1), a central proline-rich domain, and a C-terminal region (QT domain) shared with p27KIP1. The proline-rich domain included clusters of alternating proline-alanine residues (PAPA-repeats) that were hypothesized to mediate specific protein-protein interactions required for the p57kip2 function[5,6]. The tumor suppressor mechanism of p57kip2 protein might be integrated with cyclin-CDK complexes including E-CDK2, D2-CDK2 and A-CDK2, making cell cycle to arrest in the G1 phase[7]. In many CDKIs, only p57kip2 was essential for the embryo formation and played an important role in proliferation, movement, transfiguration, differentiation and other complicated processes[8]. The mice of p57kip2 knockout developed a series of abnormalities, high rate of tumor occurrence and high mortality, suggesting that p57kip2 might participate in cell proliferation and differentiation[9].

Paternal alleles of p57kip2 were imprinted, maternal alleles of p57kip2 were normally expressed and loss of imprinting and imprinting mistakes of p57kip2 led to decreased level of gene expression leading to carcinogenesis and development of tumors[10]. It is the first gene that is regulated through imprinting. As a tumor suppressor and regulator of growth, this expression mode of p57kip2 increased the risk of abnormalities and cancers[11]. Several types of childhood tumors, including Wilms’ tumor, adrenocortical carcinoma, rhabdomyosarcoma and hepatocellular carcinoma, display a specific loss of maternal 11p15 alleles, suggesting that genomic imprinting plays an important part[8]. A few studies about p57kip2 protein expression in human esophageal cancer, gastric cancer, colorectal carcinoma, epithelial ovarian tumor, breast cancer, neoplastic thyroid tissues and extra hepatic bile duct carcinoma and intrahepatic cholangiocellular carcinoma have been reported[12-19], but the relationship between p57kip2 protein expression and HCC was less reported. In this study, we found that the p57kip2 protein positive-expression rate in HCC tissues was significantly lower than that in normal liver tissues, suggesting that loss of p57kip2 expression correlated with malignant transformation of hepatocytes. The high loss rate of p57kip2 was also found by Nakai[20] and the occurrence rate of tumor was increased after p57kip2 gene was knocked out. There was a significant correlation between the p57kip2 positive-expression and histological grade of HCC (P = 0.007), the poorer the cancer cells were differentiated, the lower the expression of p57kip2 in tumor tissues was. There was a significant correlation between well-differentiated and poorly differentiated HCC (P<0.05), showing that the inactivation of p57kip2 could occur at early stage of hepatocytes transformation, leading to decrease of p57kip2 protein expression, and p57kip2 negative-regulation function and resulting in hepatocytes over-proliferation. It suggested that expression of p57kip2 was negatively correlated with clinical stage and that p57kip2 protein negative-expression may indicate a poor prognosis. In our statistical analysis, we found that there was a significant relationship between p57kip2 protein expression and prognosis. The p57kip2 protein was more highly expressed in tumors with a good prognosis, compared with tumors with a poor prognosis.

PCNA was an assistant factor of DNA synthetase delta, it took part in DNA biological synthesis and regulated cell cycle and cell proliferation by a tetramer with cyclin, CDK and p21. The amount of PCNA could reflect the proliferating activity of cancer cells, and could be regarded as the index of proliferation[21]. Over-expression of PCNA was associated with a variety of tumors of the digestive system. Our results showed that the PCNA positive-expression rate was higher in HCC tissue than that in normal liver tissues and the p57kip2 protein positive-expression rate was lower in PCNA positive tissues than that in PCNA negative tissues (P<0.05), suggesting that PCNA had a high positive-expression in HCC and cell proliferating activity was high in tumor tissues with negative or reduced expression of p57kip2 protein. It was proved that p57kip2 could interact with PCNA, and p57kip2 could block by DNA replication via suppressing the function of PCNA as a tumor suppressor.

It has been found that p53 is an important apoptosis gene and its mutation induces cell-cycle dysregulation. Fifty percent of human tumors with p53 mutation had abnormality of DNA check. The HCCs with p53 mutation had a high malignant potential, and p53 mutation in the primary lesion could be used as an indicator for the biological behavior of recurrent HCCs, and as an independent prognostic factor affecting survival after recurrence, but DNA check had no p53-dependent mechanism. Our results showed a positive relationship between p57kip2 and p53, but without statistical significance. Hong stimulated hepatocytes with low-dose thioacetamide (TA) and found p57kip2 increased to a peak level at d 2 but p53 increased to a peak level at d 3, showing that p57kip2 arrested cell cycle in the S phase but p53 arrested cells in G1 phase. It has been proved that p53 expression is reduced in HCC, but p57kip2 can directly combine with CDK-cyclins via non-p53-dependent mechanism to suppress CDKs and differs from p21 which blocks cell cycle via p53-p21-CDKs-cyclins path.