AIM: To explore expression and distribution features of COX-2 and bcl-2 in human gastric adenocarcinoma tissues and to study its biological significance.

CONCLUSION: Abnormal expression pattern of COX-2 within the tissues of human gastric cancer is correlated with tumor location and lymph node metastasis. COX-2 may regulate expression of apoptosis suppressor gene (bcl-2) through interaction of tumor cells and stromal cells and play an important role in the generation and development of tumors, which will be of great help in developing new methods for antitumor therapy.

In this study, we used immunohistochemistry method to detect the expression of COX-2 and bcl-2 protein in human gastric adenocarcinoma and their corresponding para-cancerous tissues, and to explore the distribution features of COX-2 and bcl-2 in human gastric adenocarcinoma and the biological significance, and to provide rational foundation for designing effective schemes of antitumor therapy.

A total of 36 human gastric adenocarcinoma (including 16 cardiac adenocarcinomas and 20 distal gastric adenocarcinomas) cases were investigated. All tissues were surgically resected. Cancerous tissue and para-cancerous gastric mucosa were all from the same specimens. Morphologically normal gastric mucosa tissues were used as control. Each specimen was fixed in 10% phosphate-buffered formalin immediately after resection, embedded in paraffin and sectioned into 4 μm for immunohistochemical study and routine histological examination.

The study was approved by the Ethics Committee of our hospital and all patients gave written informed consent prior to enrollment.

Under the light microscope, the immunoreactivity was evaluated both qualitatively and quantitatively. Intensity and percentage of positive cells were used to evaluate each tissue section. The immunostaining intensity was scored as 0 (achromatic), 1 (light yellow), 2 (yellow), and 3 (brown). Immunostaining quantity was scored as follows: 1 = <25%, 2 = 26-50%, 3 = 51-75% and 4 = >75% of tumor cell showing positivity. The combined score, based on both qualitative and quantitative immunostaining, was determined by multiplying the qualitative and quantitative scores. Based on the combined score, the samples were grouped as follows: negative (-) 0-1, weak (+) 2-3, moderate (++) 4-6, strong (+++) >6.

With statistical analysis package (SPSS) version 10.0 for Windows, difference between groups was evaluated by using chi-square test and Student’s t test. The P value less than 0.05 was considered statistically significant. All reported P values were two-sided. 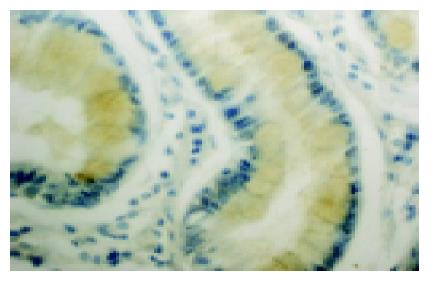 The expression of bcl-2 protein in gastric cancer tissues was located in cytoplasm of tumor cells and stromal lymphocytes. In para-cancerous tissues, only a few deep glandular epithelium cells and intestinal metaplasia cells expressed bcl-2 protein. The positive rate and intensity of bcl-2 expression in gastric cancer tissues were higher than that in para-cancerous tissues. The expression of bcl-2 protein was not correlated with location and histological type of tumor and lymph node metastasis (data was not shown).

COXes are thought to be important in maintaining the normal physiological and pathological functions. COX-2 may be involved in the development and progress of tumor by promoting proliferation of cells and tumor angiogenesis and inhibiting apoptosis of cells[1,2].

The increased expression of COX-2 mRNA or protein has been demonstrated in human tumors of digestive system[3-8], such as esophageal cancer, colorectal cancer, liver cancer and pancreas cancer. The expression of COX-2 protein in human gastric cancer tissues has also been reported. However, distribution features of COX-2 protein in human gastric cancer tissues, relationship between COX-2 and bcl-2 are not completely clear. In the present study, we demonstrated that COX-2 protein was overexpressed in human gastric cancer tissues. The location of COX-2 products varied with difference of tumor differentiation. In intestinal adenocarcinoma, COX-2 protein was present in the cytoplasm of tumor cells with moderate staining intensity. But in diffuse adenocarcinoma, COX-2 protein was localized in nucleus of tumor cells and stained with brown granules. Sometimes, COX-2 protein simultaneously appeared in nucleus and cytoplasm of tumor cells. Interestingly, the positive rate of COX-2 expression and stained intensity in cardiac carcinoma were significantly higher than that in gastric distal carcinomas. These findings differed from other reports[9] in which similar rate of positivity was evident in intestinal-type cardiac carcinoma (52%) when compared to the noncardiac ones (64%). However, there was a trend of lower incidence of strong COX-2 positivity in cardiac than in noncardiac tumors (14% vs 41%). This difference of COX-2 distribution may be associated with specificity and sensitivity related to different COX-2 antibodies and staining protocols or procedures. There may be ethnic difference between different peoples. Recent studies[11] indicated that genesis of cardiac cancer was related to reflux esophagitis, intestinal metaplasia in the junction of stomach and esophagus and atypical hyperplasia. Incidence of cardiac adenocarcinoma was increasing in Chinese, which may be one of the factors that lead to high-level expression of COX-2 in cardiac cancer.

Our results showed that COX-2 protein was not only expressed in neoplastic epithelial cells, but also in interstitial macrophages and fibroblasts, which might be an incidental phenomenon in the progression of diseases unrelated to carcinogenesis itself or might be a reaction to mucosal lesion. The stromal cells expressing COX-2 can stimulate proliferation of epithelium cells and promote tumorigenesis through paracrine ways[12]. Williams and his colleagues[13] found that the growth of a lung carcinoma cell line is markedly attenuated in COX-2-/- mice or mice treated with a COX-2-selective inhibitor. In sporadic colorectal adenomas, COX-2 was localized on superficial interstitial macrophages and dysplastic epithelial cells. The mechanism to induce epithelial carcinogenesis may be COX-2-mediated paracrine signaling between the macrophages and epithelial cells within tumors[14].

The development and progression of stomach cancer is a pathological process involving many factors, stages and oncogenes, in which imbalance between apoptosis and proliferation of cells plays an important role. Bcl-2 gene is a well-known apoptosis suppressor gene leading to increase of abnormal cells by inhibiting cell apoptosis and prolonging life span of cells, but not promoting cell proliferation, so it will make way for the development of tumors[15]. Our results showed that the positive rate and intensity of bcl-2 protein expression in tissues of gastric adenocarcinomas was higher than that in para-cancerous tissues, suggesting that epithelial cells might have overexpression of bcl-2 protein during malignancy transformation of gastric mucosa, which makes regulatory mechanism of cells changeable. Therefore, the balance between apoptosis and proliferation of cell was destroyed, which will conduce to development of tumors. The expression of bcl-2 protein was not related to differentiation and location of gastric adenocarcinoma.

Recent studies[16-19] suggest that COX-2 was involved in the development of tumors through following ways: (1) COX-2 can increase products of prostaglandin; (2) COX-2 can transform pre-carcinogen to carcinogen; (3) COX-2 can inhibit apoptosis of cells and promote adhesion of cells; (4) COX-2 can promote angiogenesis of tumor; (5) COX-2 can regulate inflammation and immune functions; (6) COX-2 can enhance invasive ability of tumor cells. We also found in the present experiment that the tissues with a high-level expression of COX-2 expressed simultaneously high-level of bcl-2 protein, indicating the COX-2 can promote expression of bcl-2 and decrease cell apoptosis. Therefore, we suppose COX-2 plays an important regulatory role in bcl-2 expression. Further study of interaction between COX-2 and bcl-2 in the gastric cancer is warranted.