AIM: To study the role of the intracellular receptor domain of gp130 in human inflammatory bowel disease (IBD).

METHODS: We amplified and sequenced the complete exon 17 of the human gp130 gene in 146 patients with IBD. According to clinical and histopathological signs, the 146 patients with IBD were classified as having Crohn’s disease (n = 73) or ulcerative colitis (n = 63), or as indeterminate status (n = 10).

RESULTS: No mutations in exon 17 of the gp130 gene could be detected in any of the 146 patients with IBD examined.

CONCLUSION: There is no evidence that mutations in exon 17 of the gp130 gene are involved in the pathogenesis of human IBD.

The intracellular domain of the common gp130 receptor subunit harbors several essential motifs involved in signal transduction of gp130 cytokines (Figure 1). The membrane proximal homology region of the intracellular gp130 domain containing the box1 and box2 motifs is important for Jak association[1,4]. The tyrosine residue Y757/759 (murine/human) in the cytoplasmic domain of activated gp130 is essential for the association of gp130 with src-homology 2 domain-bearing protein tyrosine phosphatase (SHP)-2 and suppressor of cytokine signaling (SOCS)-3[1,4]. SHP-2 down-regulates STAT signaling and links the Jak-STAT cascade to the ras-dependent mitogen-activated protein kinase pathway. SOCS-3 inhibits the Jak-STAT signaling cascade by directly inhibiting Jak kinase activity as well as by binding to activated intracellular cytokine receptor domains and inhibiting further protein association[1,3,4]. Finally, the tyrosines Y765/767 (murine/human), Y812/814 (murine/human), Y904/905 (murine/human), and Y914/915 (murine/human) in the cytoplasmic domain of activated gp130 are required for the association of STAT proteins with gp130. This association is essential for STAT phosphorylation and activation[1,4]. 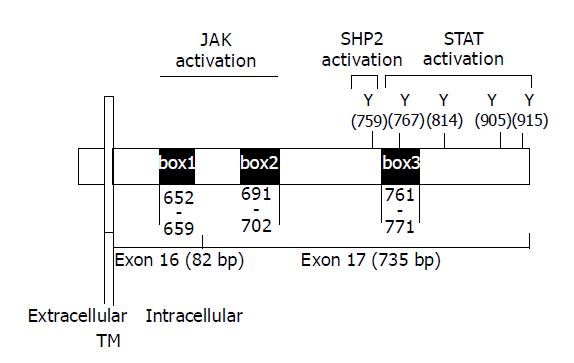 Crohn’s disease and ulcerative colitis are classified as chronic inflammatory bowel diseases (IBDs) characterized by chronic inflammation and the inability to maintain mucosal integrity in the large and/or small intestine. The human gp130 gene is located on chromosome 5q11[4]. Until now, linkage studies have not reported the gp130-corresponding loci on chromosome 5q11 to be susceptible loci for IBD[8], whereas there have been considered susceptible loci for IBD on chromosome 5q31 and 5q13[8]. Nevertheless, data obtained from Gp130ΔSTAT mice strongly suggest that mutations in the intracellular binding sites of gp130 might play a role in the pathophysiology of IBD[5-7]. Therefore, we performed a candidate gene study, searching for mutations in exon 17 of the gp130 gene in 146 patients with IBD.

A total of 146 patients with Crohn’s disease (n = 73), ulcerative colitis (n = 63) or indeterminate colitis (n = 10) were recruited through the IBD in-patient and out-patient clinics at our university hospital in Munich. Patient data were obtained by chart review and patient questionnaire and recorded by a senior gastroenterologist. Inclusion criteria were based on homogenous diagnostic parameters including clinical data (physical examination, CDAI[9]/Lichtiger score[10]), laboratory findings, endoscopic criteria (location and degree of inflammation, stenosis, fistulas, transmural involvement in colonoscopy) and radiological findings (CT and/or MRT). At inclusion, all patients had duration of IBD of more than one year. An infectious pathogenesis of gastrointestinal symptoms was excluded in all patients by biopsy and stool culture. EDTA blood samples for molecular genetic studies were taken, after written informed consents were obtained from the patients and/or their parents. The study protocol followed ethical guidelines and was approved by the Institutional Ethical Committee.

Seventy-three patients with Crohn’s disease (39 males, 34 females), 63 patients with ulcerative colitis (24 males, 39 females) and 10 patients with indeterminate IBD (4 males, 6 females) were examined. The median age at inclusion was 39±10 years in the CD group, 41±15 years in the UC group and 47±19 years in the indeterminate group (mean±SD). All patients included in this study had a history of at least one episode with an elevated CDAI[9] of more than 150 points in Crohn’s disease or a Lichtiger[10] score of more than 10 points in ulcerative colitis in combination with characteristic endoscopical and radiological findings.

The animal model of gp130ΔSTAT mice demonstrated impaired STAT activation due to a truncated intracytoplasmatic gp130 receptor domain lacking the tyrosine residues Y765/812/904/914 associated with impaired mucosal healing, mucosal ulcers in the gastric pylorus and caecum, and exaggerated DSS-induced colitis[5-7]. On the other hand, gp130 (757F) mice harboring a mutated (Y757F and V760A) YxxV motif for SHP-2 and SOCS-3 binding displayed enhanced tissue STAT3 phosphorylation, but abrogated SHP2-Ras-ERK signaling following IL-6 stimulation. Gp130 (757F) mice developed gastric adenomas by 3 mo of age[6]. These two gastrointestinal phenotypes are highly similar to the phenotypes exhibited by mice deficient in trefoil factor 1 (pS2/TFF1) and in intestinal trefoil factor (ITF)/TFF3, respectively. TFF1 and TFF3 are members of the trefoil factor (TFF) family; each of them bears a characteristic three-looped structure known as the trefoil domain. TFF1 is primarily expressed in gastric-pit mucus cells. TFF3 is expressed at its highest level in the mucous-secreting goblet cells of the small and large intestine. TFFs are supposed to be involved in the process of healing or restitution, since they are upregulated after injury to the gastrointestinal epithelium. TFF1 knock-out mice could develop gastric hyperplasia, whereas deletion of TFF3 might become visible in an exaggerated response to DSS-mediated epithelial damage. Regulation of TFF1 and TFF3 in the gastrointestinal tract seems to be dependent on SHP2/Erk and STAT1/3 signaling, as reduced gastric levels of TFF1 can be seen in gp130 (757F) mice, while reduced colonic levels of TFF3 are observed in gp130DSTAT mice[6,7]. Taken together, it seems that the integrity of the gastrointestinal mucosa can be maintained by a balanced activation of both pathways (leading to a certain ratio of TFF1 vs TFF3). According to this model, the imbalance in favor of STAT1/3 signaling leads to excessive antral proliferation, presumably caused by unhindered effects of STAT signaling. An exaggerated activation of the SHP2/Erk signaling cascade results in mucosal healing defects due to a lack of phosphorylated STAT3. Either the decreased level of phosphorylated STAT3 itself or down-regulation of TFF3 leads to impaired epithelial cell migration after the injury of the intestinal epithelium. However, our current study has demonstrated that impaired STAT activation due to a mutated or truncated intracellular gp130 receptor domain is not involved in the pathogenesis of IBD in humans. Nevertheless, mutations at this site might be involved in the pathogenesis of other human diseases, e.g., degenerative joint disease or blastocyst implantation failure[5].

Other studies suggest IBD to be associated with increased rather than decreased STAT activation. Increased STAT1 phosphorylation[11], STAT3 phosphorylation[12], and STAT-dependent SOCS-3 expression[11,12] have been observed in human colon samples from patients with IBD.. Phosphorylated STAT proteins are primarily expressed in inflammatory cells infiltrating the mucosa[11,12] and STAT activation is probably due to IL-6-mediated stimulation of these cells[13]. Suzuki et al[14] reported that a mutant SOCS-1 protein (F59D-JAB) inhibits the negative regulatory effects of endogenous SOCS-1 and SOCS-3. F59D-JAB transgenic mice demonstrate exaggerated DSS-induced colitis and hyperactivated STAT3 activation, probably due to lack of the negative regulatory role of SOCS-3[12]. Loss of SOCS-3 has recently been shown to result in prolonged STAT3 and STAT1 activation after IL-6 stimulation[15,16].

In summary, dysbalance of the Jak-STAT pathway seems to be involved in the pathogenesis of colitis[6,8,12,14]. In the current study, however, we found no evidence that mutations in exon 17 of the gp130 gene, encoding all functionally essential intracellular tyrosine residues of the gp130 receptor (Figure 1), are involved in the pathogenesis of human IBD. Our data suggest that other mechanisms are important for the dysbalance of the Jak-STAT pathway in IBD. The role of STAT protein activation and negative regulation of Jak-STAT signaling merits further investigation. Studies on the putative role of SOCS-3 mutations in the pathogenesis of IBD are currently underway.

This work contains parts of the unpublished doctoral thesis of K. Zitzmann at the Ludwig-Maximilians-University of Munich, Germany.