AIM: To detect the anomaly in the persistent right umbilical vein (PRUV) of portal vein (PV) with deviation of the ligamentum tere and left-sided gallbladder.

METHODS: A total of 5783 candidates for routine analysis were evaluated for hepatic vascular abnormalities by ultrasonography.

Abdominal ultrasonography (US) is a routine clinical method of examining the liver. The classification of Couinaud is used at present in order to divide the liver into 8 areas counter-clockwise from the caudate lobe. In this classification, the portal vein (PV) dominates an area, and the hepatic vein becomes a boundary in each area. Therefore, understanding the main root and branching of the PV is very important.

We observed an anomaly in the persistent right umbilical vein (PRUV) of PV first described by Matsumoto[1] in 1986, who noted the absence of the umbilical portion of the left PV from its normal site and deviation of the ligamentum teres to the right. Therefore, we investigated the prevalence of PRUV during routine ultrasonography screening.

Between April 1995 and March 1996, 5783 (3227 men, 2556 women) subjects underwent abdominal US at Matsusaka Central General Hospital. We had detected anomalous portal branching of PRUV in 10 persons. Ten men and 10 women were enrolled in this study.

An ALOKA SSD-650 ultrasound machine with 3.5 MHz convex array probes was used. Then we routinely assessed PV flow by duplex sonography (combined real-time and pulsed Doppler) employing an EUB-565A transducer with 3.5-5.0 MHz (Hitachi, Japan). The wall-filter was set at 50-100 Hz. Sample volume was maintained below 5 mm and located at the center of each vessel. The spectral waveform was angle-corrected and the Doppler angles of incidence were less than 60°. We observed anomalous portal vein branching system by B-mode method. Then we investigated blood vessel diameter, mean velocity and mean flow volume with pulse wave Doppler methods, and compared the left side umbilical portion with normal group of patients and trunk of the PRUV. Pulsed Doppler US was performed in the supine position, using mechanical ventilation or quiet breathing in a fasting state. The sample point of the pulsed Doppler US examination was placed at the center of the umbilical portion.

Anomaly of the PRUV of PV was incidentally detected during a routine abdominal US. The prevalence of this anomaly was 0.17% (10 of 5 783). Three men and 7 women aged 20-81 years (mean, 53.9 years) had the anomaly. In these patients with PRUV at the portal hepatis, the portal trunk first gave rise to a branch to the right posterior segment. The left PV which normally runs horizontally at this level was absent, and there was no major branch to the right anterior segment. The portal trunk then ran upward and gave off a branch to the left lobe. At this point, the PV made a U-turn in a right anterior direction and downward, giving off branches to the right anterior segment and small branches to the left lobe. The umbilical portion was not identified at its usual position (i.e., in the left PV between the medial and lateral segments of the liver). Instead, a U-shaped part resembling the umbilical portion was seen above the gallbladder fossa (i.e., on the Cantlie line). Right anterior segment and quadrate lobe of the liver were supplied from the entire part of the PRUV (Figure 1).

In patients with this anomaly, the PRUV lay astride the ligamentum teres, or on the left side of the ligame-ntum teres of the gallbladder (i.e., left-sided gallbladder) (Figure 2). 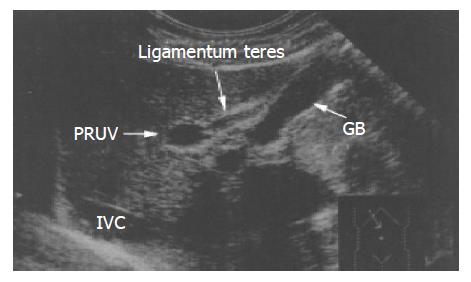 Only in 1 of these 10 cases, the neck of the gallbladder began diagonally opposite the main PV. The gallbladder body went in the direction of the left side and fundus was enlarged to the left side of the above mesenteric artery (Figure 3). In two patients, the left hepatic vein was shunted from the top of the PRUV to the portal branch to the inside of the left-lobe. Turbulent blood-flow together with portal venous shunt was observed at the PRUV (Figure 4). Two patients underwent hepatic resection because of an intra-hepatic bile duct stone in the right posterior segment. Furthermore, 1 patient showed malrotation of the intestine in the colon fiberscopic examination. 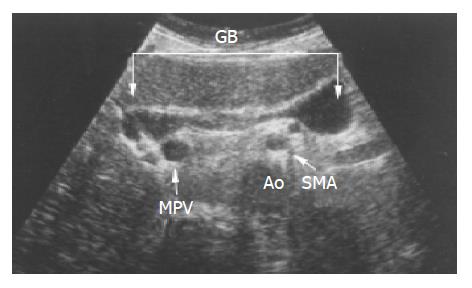 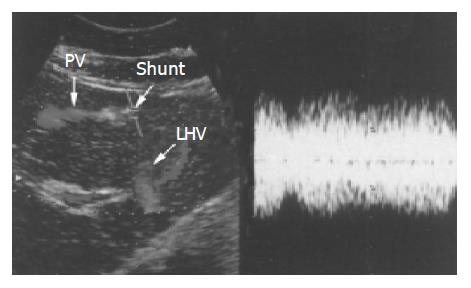 The prevalence of PRUV ranges from 0.1% to 0.7%, according to previous reports[1,2,3,6]. The reported prevalence is almost equivalent to 0.17% (10 of 5783) in our present study. Other studies have reported a higher prevalence, which is 1.2% in the computed tomography study of Maetani et al[8]. This difference is probably due to the absence of an ultrasonographic examination. Infect, 4 of 10 cases in our study were not detected for this anomaly during a previous examination. Therefore, this anomaly should be kept in mind during ultrasonographic examination.

Ramification in some major branches at more distal levels is the most important clinical feature of this PV anomaly. A risk for hepatic necrosis increases in liver resection otherwise an anomalous portal trunk is well understood at the peripheral branch level. Dissection of the liver along the right side of the ligamentum teres, as is usually performed in the donor’s liver during a partial liver transplantation, may cause a circulatory disturbance of a wide area of the right lobe. Therefore, it is important to understand the portal running by US before operation. In addition, this portal anomaly always accompanies the abnormal position of the left side of the gallbladder (left-sided gallbladder).

However, Ozeki et al[4] reported a case of left-sided gallbladder with a PV anomaly and proposed another origin. They suggested that the gallbladder is situated on the left side of the ligamentum teres simply because the latter deviates to the right. Furthermore, Kimura et al[5] and Yamasaki et al[9] reported a case of portal in front of the duodenum. Infrahepatic inferi should be looked for during routine US screening or vena cava defect[10], multiple spleens, malrotation of the intestine and annular pancreas with PRUV should be considered.

In conclusion, PV anomaly has important clinical implications in preoperative examination of the liver, and should be looked for during routine screening.