A 42-year-old Japanese man with liver cirrhosis by hepatitis C virus (HCV) had successful interferon therapy in May 1991. Since then, serum HCV-RNA and liver function tests had been negative. He had continued to drink more than 100 g/d of alcohol as before. In June 2003, a 5-cm tumor was found in the posterior segment of the liver. The tumor was curatively resected and the surgical specimen showed a well-differentiated hepatocellular carcinoma (HCC). Non-cancerous lesions of the liver revealed fibrosis at stage F3 with minimal to mild inflammation of grade A1. Heavy drinking may retard the dissolution of fibrosis and accelerate HCC development in patients with sustained virological response.

Hepatocellular carcinoma (HCC) is the third leading cause of death in Japan. Hepatitis C virus (HCV) infection is apparently a major cause of HCC[1-6]. Patients with chronic HCV infection seem destined for progression from milder forms of hepatitis to cirrhosis and, eventually, to HCC. The more advanced is the fibrosis of the liver, the higher is the risk of HCC development. This risk is surprisingly high in cirrhotic patients, the incident rate being about 7% per year[7]. Previously, those patients had no choice but to pass uneasy days in fear of HCC development. It was believed that liver fibrosis is an irreversible change and liver cirrhosis is an incurable disease. Recently, however, it has been shown that the risk of HCC is reduced in HCV-infected patients by interferon therapy, even in cirrhotic patients[8-13]. Interferon therapy can not only improve inflammation, but also ameliorate fibrosis and reduce the risk of HCC. More recently, it has been considered that HCC rarely develops long after HCV eradication[14,15].

Although interferon therapy has been employed for more than a decade, it is not clear how long the risk of HCC lasts among patients who have achieved sustained virological response (SVR). Recently, we had a case with HCC developing 12 years after HCV eradication. This case seems worthy of noting the details, and the data might be helpful for managing patients after HCV eradication.

A 42-year-old Japanese man had abnormal liver function tests at a health check-up in 1987. Serum ALT and AST were moderately elevated, 80 and 79 IU/L, respectively. He had no history of blood transfusion or drug abuse, but had been consuming more than 100 g/d of alcohol for 20 years. The liver biopsy specimen showed liver cirrhosis, diagnosed later as A1F4 according to the Classification by Desmet[17]. Alcohol hyaline was not found in the specimen (Figure 1). 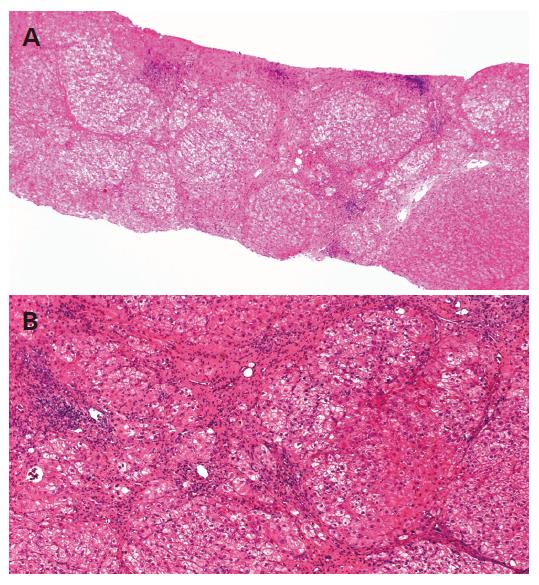 Figure 1 (A and B) Liver biopsy specimen before interferon therapy revealed liver cirrhosis with mild inflammation. It was graded as A1F4 according to the Classification by Desmet. Alcohol hyaline was not found (H&E stain, original magnifications A: ×4, B: ×200).

In May 1991, he underwent successful interferon therapy after a diagnosis of HCV infection using a total dose of 390 MU of natural interferon-alpha (Sumiferon®, Sumitomo Pharmaceuticals Co., Ltd., Osaka, Japan). Serum HCV-RNA had been negative ever since, and liver function tests, including ALT and AST, had also been normalized. He had continued to drink alcohol heavily as before.

His follow-up had included blood tests and ultrasound examinations every 4-6 mo. In June 2003, ultrasonography and CT scan demonstrated a tumor of 5 cm in diameter in the posterior segment of the liver (Figure 2). Blood tests were normal except for elevated desgamma carboxy prothrombin (DCP, 44 mAu/mL, normal <40 mAu/mL). Angiography confirmed a hypervascular nodule, suggesting HCC. 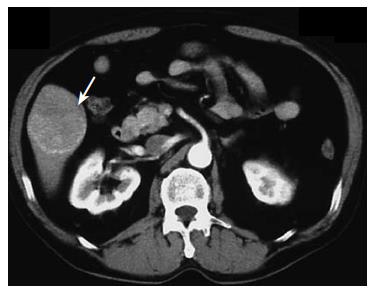 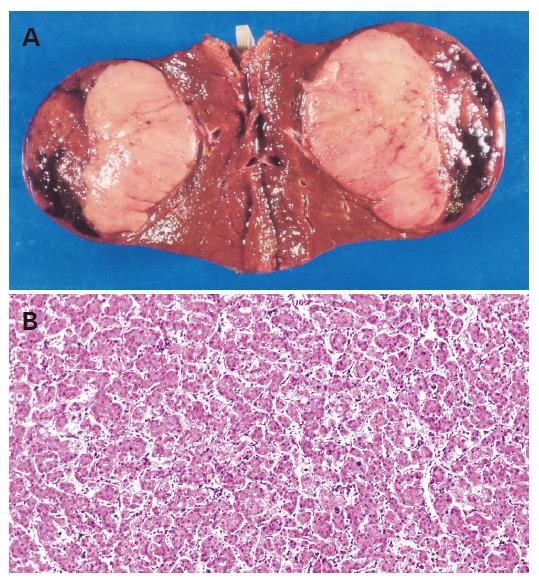 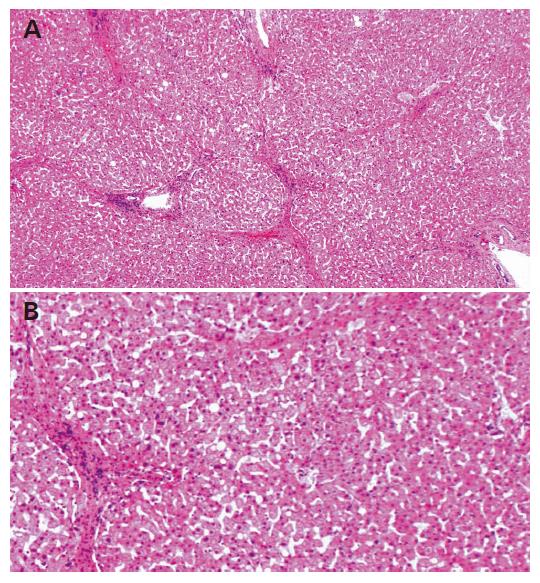 Figure 4 (A and B) Surgical specimen of non-cancerous lesion showing improvement of fibrosis and inflammation. However, great amounts of septa were observed, although fibrous bundles apparently decreased. Fibrosis resolved, revealing liver cirrhosis with mild inflammation. It was graded as A1F3 (H&E stain, original magnifications A: ×4, B: ×200).

The patient had recurrence of multiple HCCs, 12 mo after the surgery. Chemoembolization was performed repeatedly, and he was in remission up to September 2004.

Interferon therapy has been shown to reduce the risk of HCC development among the patients with chronic HCV infection. Their risk is decreased to one-third and their survival is also significantly improved when they obtain SVR[17,18].

The present case developed HCC, 12 years after HCV eradication, perhaps the latest developed HCC case on record. It may be helpful for the management of post-eradication patients to review the details of this case in terms of the potential of HCC development.

The present patient had been showing normal aminotransferase values, including ALT and AST, and negative results for serum HVC RNA for 12 years after receiving interferon treatment. Although the histological findings of the liver were improved, great amounts of septa were still observed in the surgical specimen, suggesting F3. In patients with this status, the HCC risk is appraised at 5% per year. The dissolution of fibrosis may have been retarded in the present case. Shiratori et al[19] reported that the F values regress at a rate of -0.282/year among patients with SVR that is based on the method of Poynard[20]. The regression rate in the present case was from F4 to F3 for over the course of 12 years, a meager -0.083/year compared to the reported rate.

The patient had been consuming alcohol since the successful interferon therapy, perhaps accounting for the fact that the hepatic fibrosis had not been dissolved as expected. Alternatively, a long time after eradication, the regression rate in patients may not be as high as in those previously reported. As little data is available regarding regression or HCC development in patients with more than 10 years of follow-up, further studies will be needed.

In addition, alcohol itself may accelerate HCC development. Alcohol intake of 41-80 g/d and over 80 g/d is reported to increase the risk of HCC in HCV-infected patients by two- and four-fold, respectively[21]. Alcohol may also facilitate the growth of HCC, as the doubling time of tumor volume was reported as 148 d in abstemious patients and 78 d in imbibing patients[22].

The degree of liver fibrosis, male gender, higher age, and alcohol intake are well-known risk factors for HCC in chronic HCV-infected patients. The present patient met all these conditions, although little is known as to whether they serve as risk factors in patients with SVR. However, alcohol may have played a role in the development of HCC in this case. If he had stopped consuming alcohol, his liver fibrosis would likely have been improved to a greater extent, and he might have escaped from HCC entirely.

In conclusion, heavy drinking may retard the dissolution of fibrosis and accelerate HCC development in patients with SVR. A larger population of similar cases needs to be studied.