AIM: To evaluate whether the cytokine responses in liver and serum differ in chronic hepatitis C patients with normal and high alanine aminotransferase (ALT) levels.

RESULTS: Serum cytokine levels were similar in both groups (P>0.05). Stimulated IFN-γ and TNF-α levels in LILMCs were increased in both groups. IL-12 and IL-10 levels stimulated with IL-2 were higher in group 1 than in group 2 (P = 0.023). Histological activity index (HAI) and stage had a negative correlation with TNF-α and IFN-γ levels in group 2.

The liver is the primary site of hepatitis C virus (HCV) replication[1]. Clearance and control of HCV infection depend on immune responses. T lymphocytes and immunoregulatory cytokines play an important role in the host response to HCV infection[2]. Intrahepatic T-cell response to HCV may determine the hepatic injury of HCV infection[3,4]. T cells also play a role in HCV clearance[5]. Th1 cytokines such as IL-2 and IFN-γ are required for host antiviral immune response, while Th2 cytokine (IL-10) can inhibit the development of these responses[2]. TNF-α also triggers a partially overlapping set of antiviral defense mechanisms and serum level of TNF-α reflects the progression of inflammation[6,7].

This study aimed to evaluate whether the cytokine responses in liver and serum differ in chronic hepatitis C patients with normal and high ALT levels.

Thirty-three patients infected with genotype 1b HCV were studied. Sixteen of them had persistently normal ALT levels (group 1), while 17 had high ALT levels (group 2) by at least four analyses in a year. Anti-HCV was determined by UBI EIA 4.0 (Organon Teknika, Holland). HCV-RNA was determined by polymerase chain reaction (COBAS Amplicor 2, Roche Diagnostics, Germany) and HCV genotyping was carried out with INNO-LiPA HCV assay (Innogenetics NV, Belgium). Hepatitis B surface antigen (HBsAg) and anti-HIV were negative in all patients. HBsAg was detected by immunoenzymatic assay [Hepanostika HBsAg Uni-Form II (Organon Teknika, Holland)]. All patients were also negative for any other etiology of liver diseases. Blood was drawn from all patients and centrifuged at 2 500 r/min for 5 min and separated serum samples were stored at -85 °C. Liver biopsy was performed in all the patients before the treatment. Histological changes (HAI and extent of fibrosis) were assessed according to the Knodell’s scoring system[10].

LILMCs were isolated from liver biopsies as previously described by Bertoletti et al[11]. Biopsies were washed twice in RPMI 1640 medium to remove contaminated blood and digested with collagenase type-I (1 mg/mL CO130, Sigma Chemical Co., USA) and deoxyribonuclease I (25 mg/mL D4263, Sigma Chemical Co., USA) for 1 h at 37 °C on a shaking device. The liver specimen was then pipetted vigorously to disrupt the hepatic tissue and to release infiltrating lymphomononuclear cells. The mononuclear cell suspension was washed twice and the cells were recovered by centrifugation over a Ficoll-hypaque density gradient. Cells were then suspended in RPMI 1640 (GIBCO Lab) containing 10% heat inactivated fetal calf serum, 25 mmol/L HEPES, 2 mmol/L L-glutamine and 50 µg/mL gentamycin. Viability was >95% by the trypan blue dye exclusion test. Cells were cultured in duplicate (1.0×105 viable cells/100 µL) in flat-bottomed 96-well plates at 37 °C in an atmosphere containing 50 mL/L CO2 with medium alone (unstimulated culture) and stimulated with 10 µg/mL phytohemagglutinin (1:100 PHA, Sigma Chemical Co., USA) and recombinant IL-12 (20 U/mL, R&D Systems, USA). Restimulation was performed every 10 d. Supernatants were collected at the end of the proliferation assay and kept frozen at -70 °C for later analyses. Culture supernatants and sera were thawed and the serum level of cytokines was measured by ELISA.

The local ethic committee approved this study. Informed consent was obtained from each patient included in this study. Data were presented as mean±SD. Data analysis was made by the χ2, Fisher’s exact, Mann-Whitney U and Pearson’s correlation tests using SPSS for Windows (Chicago, IL, USA) when appropriate. P<0.05 was considered statistically significant.

Age, gender and viral load were similar in groups 1 and 2 (Table 1). The results of biochemical analyses except for aspartate aminotransferase (AST) and ALT were also similar in both the groups. In group 1, five patients underwent liver biopsy before being enrolled in the study. Though liver histology was similar in three patients, histological progression from stage 1 to stage 3 was observed in two of them. 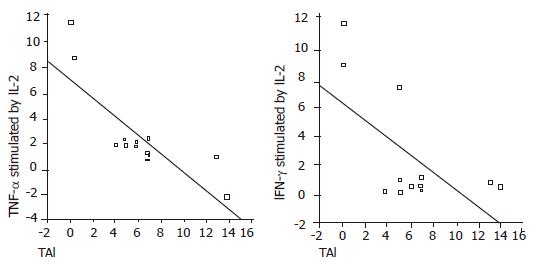 Figure 1 Negative correlations between histological activity index (HAI) and TNF-α and IFN-γ levels in LILMCs of patients with elevated ALT. 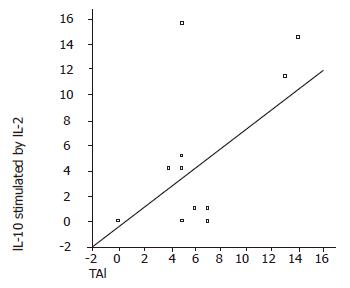 Figure 2 Positive correlation between IL-10 stimulated by IL-2 and HAI in patients with elevated ALT.
DISCUSSION

Factors involved in the progression to end-stage liver disease in HCV-infected patients are not well characterized. It is thought that cytotoxic T lymphocyte (CTL) response early in infection may be important for viral clearance, while continuous low-level anti-HCV CTL-dependent immune response may be responsible for accumulated liver damage[12]. Prezzi et al[13] showed that LILMCs have phenotypic and functional characteristics distinct from peripheral blood lymphocytes. All these immunological processes define natural progress of HCV infection. Patients with normal and elevated ALT levels show different clinical patterns[14]. Generally, HCV carriers with normal ALT have mild and stable diseases with a favorable prognosis[8]. Liver histology was normal in 20% of our cases with persistently normal ALT. Progression of liver fibrosis was observed in two of five patients (40%) who had a second liver biopsy in a period of 41.5±22.1 months.

Immunological studies concerning HCV infection generally focus on T lymphocytes. However, the serum cytokine levels have been found to be different in chronic hepatitis C patients[2,15,16]. Rico et al[1] showed that HCV specific CD4+ T-cell proliferation responses do not parallel in LILMCs and peripheral blood mononuclear cells. The magnitude of T-cell response is higher in the liver than in peripheral blood. In our study, serum levels of cytokines were similar in patients with persistently normal and elevated ALT, suggesting that liver cytokine levels are more important than serum levels in mediating T-cell responses.

Sobue et al[4] revealed that disease activity and progression correlate with dominant Th1 response in chronic hepatitis C patients. On the other hand, Tsai et al[17] showed that predominant Th1 response is stronger in patients with resolved infection than in those with chronic diseases. In our study, while histological stage and HAI were increased, TNF-α and IFN-γ levels were decreased in patients with elevated ALT (Figure 1). TNF-α and IFN-γ trigger antiviral defense mechanisms and have a principal effect on inflammation[6,7]. This means that the magnitude of antiviral immune response is decreased, while the histological activity and stage are increased. Though Th1 and Th2 responses were both strong in patients with normal ALT, Th1 response was not as high as that in patients with elevated ALT, suggesting that strong antiviral defense against HCV infection can normalize liver enzymes. On the other hand, histological abnormalities might be impaired by the increased Th2 response.