METHODS: Forty-four patients were enrolled in this study and divided into four groups with respect to their Helicobacter pylori (H pylori) and CRF status. Groups were labeled as follows: 1a: normal renal function, H pylori negative (n = 12), 1b: normal renal function, H pylori positive (n = 11), 2a: CRF, H pylori negative (n = 10), 2b: CRF, H pylori positive (n = 11). Upper gastrointestinal endoscopy was done in all the patients involved in the study. During endoscopical investigation, antral biopsy specimens were taken from each patient. In order to evaluate the cell apoptosis and proliferation in gastric epithelial cells, Bax and proliferating cell nuclear antigen (PCNA) labeling indexes (LI) were assessed with immunohistochemical staining method.

Helicobacter pylori (H pylori) is the most common chronic infection in human beings. H pylori infection has been related to peptic ulcer disease, gastric lymphoma and stomach cancers[1,2]. It is an important problem for public health as it can cause several diseases.

Gastrointestinal mucosa is characterized with rapid epithelial cell turnover and homeostasis that is mainly provided by apoptosis[3]. Therefore, it can be considered that the impaired apoptosis may have a role in the pathogenesis of many gastrointestinal system diseases.

In many studies, it has been shown that apoptotic cells are increased after colonization of H pylori in the stomach[4-7], and those increased apoptotic cell levels decrease to normal levels after H pylori eradication[5,8,9]. Increase in apoptotic cell rates causes compensatory hyperproliferative response in order to maintain gastric mucosal tissue mass[10-12].

The mechanisms by which H pylori induces apoptosis of gastric epithelial cells have remained unclear. It has been suggested that many bacterial products might be inducing apoptosis[5,13-15]. One of the factors that has been responsible for apoptosis of gastric epithelial cells is ammonia, which is produced via the degradation of urea by the urease enzyme of H pylori[5,16]. Because of high intragastric urea concentrations in patients with chronic renal failure (CRF), levels of ammonia produced by H pylori are significantly high[16]. Therefore, disorders associated with excessive ammonia production are more prevalent[17,18].

The study included 44 patients, of whom 23 with normal renal function and 21 with CRF who were on hemodialysis treatment.

Those with gastric and/or duodenal ulcers as confirmed by upper gastrointestinal endoscopy were excluded from the study. None of the patients included had a history of gastric surgery. Patients who had been treated for H pylori or who had used any antibiotics, proton-pump inhibitor, H2 receptor blocker or any compound that includes bismuth during the last one month were also excluded from the study.

We divided the patients into four groups based on their H pylori and renal function status:

All patients were examined by using the upper gastrointestinal endoscopy (video-endoscope Olympus GIP Q240) after premedication with intravenous midazolam (2.5-7.5 mg), after an overnight fast.

During upper gastrointestinal endoscopy, multiple biopsy materials were taken from the antral region of the stomach. The biopsy specimens were transferred to the pathology laboratory in 10% buffered formalin. This study was conducted after getting permission from the local ethics committee of the Baskent University School of Medicine, Ankara, Turkey.

H pylori was detected under microscopy on the histological sections stained with Giemsa staining method.

After a 12-h fasting period, venous blood samples were taken from the forearm-superficial veins of the patients in the morning. In the HD patients, the blood samples were taken before HD session. Serum levels of creatinine (normal <1.2 mg/dL) and blood urea nitrogen (BUN, normal <20 mg/dL) were measured in the central laboratory of our hospital by using routine automated techniques.

All biopsies were fixed in formalin, embedded in paraffin and processed routinely. Briefly, 4-mm-thick sections were deparaffinized and mounted on poly-L-lysine-coated slides. The sections in a citrate buffer (0.01 mol/L, pH 6) were heated in a microwave oven for 15 min at a maximum power (700 W), and then cooled at room temperature for 20 min. A standard three-step immunoperoxidase avidin-biotin peroxidase complex (ABC) technique was used to identify the proliferating cell nuclear antige (PCNA) (PC10, Neomarkers, CA, USA) (Figure 1). A catalyzed signal amplification (CSA) system was used to detect the polyclonal antibody Bax (K1500, Dako, Denmark) (Figure 2). PCNA and Bax positive cells were counted in the glandular neck region, which corresponds to the area of cell proliferation[19,20]. The field to be counted was chosen under ×400 magnification from the well-labeled area. About 1 000 cells were counted in each case to determine the PCNA and Bax labeling indexes (LI). The percentage of positively stained cells over total cells counted was then calculated and used as a labeling index for PCNA and Bax expression[21,22]. All histological slides were reviewed by the same experienced pathologist. The pathologist who rated the PCNA and Bax LI was unaware of the H pylori and renal function status of the patients. 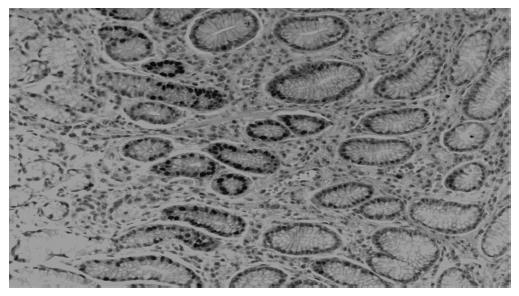 Statistical analyses were carried out using the program SPSS 9.0 for Windows. To compare the groups, we used Student’s t-test, Mann-Whitney U test, one-way ANOVA and Tukey’s HSD test when appropriate. P values <0.05 were considered statistically significant.

The number of patients, their mean ages and HD duration are shown in Table 1 for each group separately. There were no statistically significant differences between the groups with regard to mean ages, gender, and HD duration (P>0.05).

When the one-way ANOVA test was applied, statistically significant differences were detected between the groups for both Bax LI (P = 0.004 <0.01) and PCNA LI (P = 0.009 <0.01). When groups were compared further in terms of Bax LI and PCNA LI with Tukey’s HSD test for multiple pairwise comparisons, statistically significant difference was observed only between groups 1a and 2b (P = 0.006 <0.01).

Maintaining gastric mucosal integrity is a complex biological process[23]. This subject is provided with the balance between programmed cell death, which is also called apoptosis, and epithelial cell proliferation[23-26]. Apoptosis has been accepted as a physiological form of death and is a genetically programmed process where the cell commits suicide[27,28]. Unlike necrosis, dead cells do not cause inflammatory response in apoptosis[28]. Deranged apoptosis has been implicated in carcinogenesis, autoimmune diseases, and various infectious diseases including H pylori infection[5,23,28,29]. Regulation of apoptosis is a complex process. This process includes the activation of various apoptosis-related proteins such as the Bcl-2 family, p53, Fas and its ligand (FasL), and the interleukin-1b-related concerning enzyme (ICE) family[23,30].

There are several methods for evaluating cell division[31]. PCNA is a co-factor of DNA polymerase and mainly determined in late G1 or S phase. There are several evidences that PCNA assessment is a useful tool to evaluate cell proliferation and previous studies have shown that PCNA index correlates with S phase fraction of tumor cells determined by DNA flow cytometry[32-35]. Furthermore, it has been found that PCNA immunostaining correlates with Ki67, the latter marking cells in G1 and G2 phases in addition to those in S phase and also with tymidine labeling index[36] and with bromodeoxyuridine uptake in cancer cell lines[20,37].

Many genes regulate the balance between apoptosis and cell proliferation. The pro-apoptotic protein, Bax, is a member of Bcl-2 gene family and is one of the genes that regulate apoptosis. Bax gene is a tumor suppressor gene and induces apoptosis via encoding Bax protein. It has been suggested that proliferation and apoptosis in the antral mucosa caused by H pylori is associated with the alterations in genes that regulate the process[8,22,38,39]. Konturek et al[23] showed that apoptosis induced by H pylori in gastric epithelial cells is associated with the upregulation of proapoptotic Bax.

In many studies, it has been shown that the number of apoptotic cells in the stomach increase after H pylori colonization[4-6]. In addition, it has also been shown that the apoptotic cell number in stomach decreases to normal after H pylori eradication[5,8,9]. This increase in apoptotic rate causes compensatory hyperproliferative response in order to maintain gastric mucosa tissue mass[11].

In the literature, there are some data which suggest that apoptosis is associated with both bacterial and host factors[13-15,23]. However, the mechanism of apoptosis in H pylori infection is still not clear.

Some of the factors accused within the apoptosis are lipopolysaccharides, ammonia, and monochloramine (NH2Cl), which is a highly toxic substance generated as a result of the reaction of ammonia with neutrophil-derived free radicals[13-15]. There are still debates on the role of cytotoxic agents such as H pylori-CagA and H pylori-VacA in apoptosis. In recent in vivo and in vitro studies, it has been found that H pylori strains can induce apoptosis without any dependency on Cag-A and Vac-A genotype[23]. In addition to the bacterial factors in infections of H pylori, characteristics of the host can also play important roles. Evidences are increasing about the inflammatory reactions that are induced by H pylori in gastric mucosa, especially cytokines such as nitric oxide and TNFα might assist to induce apoptosis[6].

One of the major factors that are responsible for H pylori derived apoptosis is ammonia. H pylori has a strong urease activity and the hydrolysis of urea causes production of high level of ammonia concentration in mucous gel layer[40]. In vitro studies have shown that H pylori derived ammonia causes lesions in insulated gastric epithelial cells. Ammonia concentrations, determined in H pylori infected subjects, cause gastric mucosal lesions[40-42], delay in mucosal improvement[43], and induce apoptosis in gastric epithelial cells[13,44].

Ammonia level, which is produced by H pylori, is controlled by the existence of urea in gastric juice. Patients with CRF have high intragastric urea concentrations and levels of ammonia produced by H pylori are significantly high[16]. Therefore, disorders associated with excessive ammonia production may be more prevalent in patients with uremia. In our cases, increased apoptosis and proliferation rate that are observed in uremia patients can be associated with excessive ammonia production by H pylori infection in uremia patients compared with cases that have normal renal functions.