CONCLUSION: Enteric-coated ω-3 FAs in addition to treatment with 5-ASA are effective in maintaining remission of pediatric CD.

The etiology and pathogenesis of CD are still unknown[1]. First-line therapy is still based on the combinations of glucocorticoids and amino-salicylic acid (5-ASA) derivatives. Knowledge of inflammatory mechanisms and the high incidence of side effects with steroids have induced researchers to look for valid alternatives, especially in maintaining remission secondary to steroid treatment[2]. The rationale for the use of ω-3 FAs in uncomplicated CD is that metabolites of the arachidonic acid (AA), which are considered as primarily responsible for inflammatory process and intestinal inflammation in CD, are produced from fatty acids[3]. Administration of EPA and DHA, the predominant fatty acids in fish oil, causes competition with AA for the utilization of 5-lipoxygenase enzyme cascade, thus inhibiting the production of inflammatory metabolites such as LTB4[4].

Data in literature on the use of ω-3 fatty acids are controversial. Belluzzi et al[5]. claimed that ω-3 FAs seem prudent to promote a diet rich in fish oil in patients with CD, while Lorenz-Meyer et al[6]. did not demonstrate any effect of ω-3 FA supplementation on the remission of CD in adults.

Since the use of fish oil has not yet been intensively studied in children with CD, we carried out a placebo-controlled clinical trial in children with CD by administering either ω-3 fatty acid or olive oil capsules used as a placebo in addition to 5-ASA.

A double-blind, randomized study was carried out in 38 patients with CD (20 males and 18 females, mean age 10.13 years, range 5-16 years) recruited from eight Italian Pediatric Gastroenterology Centers. All of them had a definite diagnosis of CD based on accepted endoscopic and histological criteria if available (27 patients)[7].

Inclusion criteria were pediatric Crohn’s disease activity index (PCDAI) score <20 for at least 2 mo obtained by an 8-wk course of corticosteroid treatment (1 mg/kg/d), no extraintestinal involvement of the disease, no previous intestinal resection (apart from appendectomy), no previous immunosuppressant treatment and a wash-out period of at least 3 mo from corticosteroids.

Clinical evaluations and several laboratory tests [assessment of blood cell count, erythrocyte sedimentation rate (ESR), C-reactive protein (PCR) and electrophoresis] were carried out at enrollment (T0) and after 6 (T1) and then 12 (T2) months of treatment. Fatty acids in the red blood cell membranes were also evaluated with gas chromatography on capillar column (SP 2340 Supelco). Analysis temperature was set at 160 °C and 210 °C with a gradient of 8 °C/min, while the gas carrier (He) flow was 2 mL/min. The percentage (% mol) of each single fatty acid was compared to an external standard.

Data were analyzed by the statistical program 7.0 for Windows. The significance of the differences between averages and proportions was calculated by bivariate analysis (χ2 square). P<0.005 was considered statistically significant.

Relapse (PCDAI score >20) after 1 year occurred in 11 patients (61%) of group 1 and 19 patients (95%) of group 2 (Figure 1A) with a statistically significant difference (P = 0.0016). However, no relapse occurred after 6 mo of follow-up in patients of group 1 who received capsules of EPA and DHA. The disease relapse occurred 8 mo after the treatment in group 1 and 1 mo in group 2 (Figure1B) with a statistically significant difference (P<0.001). Patients in group 2 and those with ileo-colonic localization presented a greater number of relapses (Figure 1C) compared to those under treatment (group 1) who had the same initial localization of the disease (P = 0.001). Compliance to the assumption of the capsules was optimal in all the patients and no side effects were reported in patients of either group. 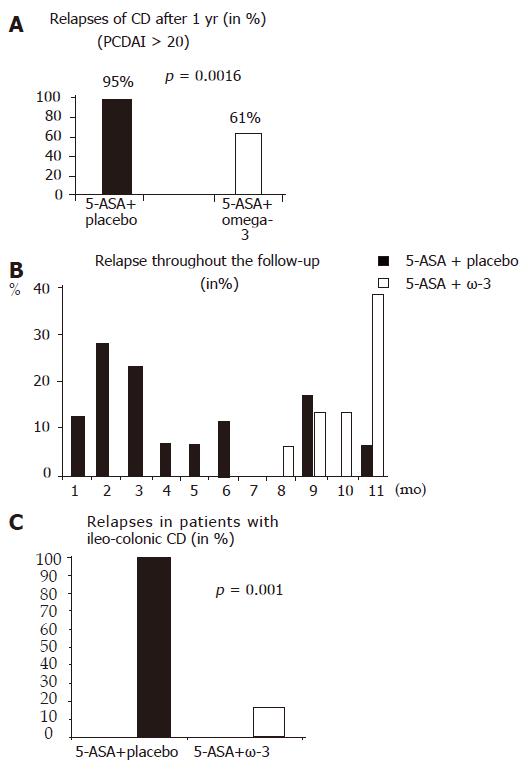 Figure 1 Relapses of CD after 1 yr (A), throughout the follow-up (B) and in those with ileo-colonic CD (C) (%). Characteristics of patients at the beginning of the study

Since no definite treatment for CD is available and the precise mechanism which triggers and maintains the intestinal inflammation is not yet well known, the aim of the treatment is to induce and maintain clinical remission[8]. There are several therapeutic options for the treatment of CD. Mild-to-moderate disease has been managed with nutritional support, 5-ASA and antibiotics[9], while the mainstay therapy for severe or complicated disease includes steroids, immunosuppressants and biological therapy[10].

Drugs most commonly used in the treatment of inflammatory bowel disease (IBD) act by interfering with the AA metabolic pathway. Glucocorticoids prevent the formation of free AA through the inhibition of the activity of phospholipases A2 and C on the membrane phospholipids, while mesalazine acts with its N-acetyl-5-ASA metabolite through the inhibition of 5-lipoxygenase in the colonic mucosa. However, both drugs have not proved to be effective in maintaining the remission of CD[11] and many relapses of the disease can occur[12]. Biological agents introduced in recent years seem to be effective in inducing remission of active disease resistant to standard treatment but not in maintaining the remission[13].

The most prolonged remission has been obtained with 6-mercaptopurine and its pro-drug azathioprine[14]. Their efficacy in maintaining remission is widely accepted, but toxicity and possible side-effects have been reported[15]. Another therapeutic option to maintain CD remission is represented by w-FAs. In 1986, Lee et al[16]. reported that fatty acids contained in fish oil can limit the AA pathway. Kim[17] reported that patients with active CD have increased levels of LTB4 in the colic mucosa associated with the severity of the disease. The anti-inflammatory effect of fish oil has been tested on animals (rats with induced colitis) and ω-3 FAs are observed to determine other biochemical effects such as reduction of mucosal and circulating levels of the main powerful pro-inflammatory cytokines (IL-1, TNF-α) and reduction of synthesis of the platelet activating factor (PAF), which has a strong pro-inflammatory activity. In addition, it has even been demonstrated that it acts as a free radical scavenger[18]. Fish oil reduces the inflammatory process competing with the AA. In fact, EPA, a polinsaturi fatty acid of 20 carbon atoms produced by the metabolism of α-linoleic acids, is different from the AA only for the presence of various double bonds in position-17. It is a good substratum for 5-lipoxygenase and competes with the AA for the utilization of this enzyme together with its corresponding DHA. The incorporation of EPA and DHA into the erythrocyte membranes is necessary to stimulate a competitive action on the AA. This effect involves a reduced LTB4 production and synthesis of a new leukotriene, LTB5, which has no inflammatory effects[19]. In 1990 Mc Call et al[20]. and Salomon et al[21]. carried out the preliminary clinical studies, showing that administration of fish oil in patients with IBD causes a significant reduction of the disease activity score (CDAI score). Hawthorne et al[22]. have verified how fish oil supplementation in patients with IBD in the active phase significantly reduces steroid consumption and results in a longer clinical remission. Confirmation of the usefulness of EPA in IBD is demonstrated by the significant decrease in the production of LTB4[23]. Since there are no adequate formulations of fish oil which could be used as a drug without side-effects, its widespread use in the treatment of IBD is limited. Belluzzi et al[5]. showed that capsules of EPA and DHA, a free fatty acid mixture, are well tolerated and can be used to treat patients for long periods instead of administering pure fish oil. Other reports are controversial, showing contrasting results in maintaining the remission of CD[24,25].

All these experiences reported in literature are referred to adult CD, but ω-3 FAs have not yet been evaluated in children with CD. Our study is the first placebo-controlled clinical trial in pediatric CD and has achieved several interesting results though the number of patients enrolled was less. In fact, the addition of enteric-coated capsules to a conventional therapy with 5-ASA in pediatric CD delayed the relapse of the disease even if it could not prevent it. This association seems that the addition of enteric-coated capsules is more effective than 5-ASA alone probably due to the synergistic effect of the drugs used. 5-ASA can inhibit some key factors of the inflammatory cascade (cyclooxygenase, thromboxane-synthetase and PAF-synthetase) as well as production of interleukin 1 and free radicals[26-28] and has an intrinsic anti-oxidant activity[29]. Furthermore, ω-3 FAs inhibit PAF-synthetase and thromboxane-synthetase acts as a free radical scavenger decreasing mucosal and circulating levels of some powerful pro-inflammatory cytokines (such as IL-1 and TNF-α)[18]. In light of these biochemical characteristics, it is clear that the association of these two anti-inflammatory compounds may strengthen their single anti-inflammatory role and explain the better results obtained with 5-ASA alone in maintaining the remission of pediatric CD. 5-ASA/ω-3 FAs seem to play the same role in pediatric CD as the balsalazide/VSL#3 in the treatment of adult ulcerative colitis. 5-ASA plus a probiotic mixture can obtain significantly better results than balsalazide alone or mesalazine alone in maintaining remission of mild-to-moderate ulcerative colitis due to the synergistic effect of the two powerful anti-inflammatory compounds[30].

In conclusion, supplementation of ω-3 fatty acids to a standard treatment with 5-ASA is a good choice for maintaining remission of pediatric CD.

This study was carried out by the authors on behalf of the other members of the Italian Society of Paediatric Gastroenterology and Hepatology: Paola Roggero, University of Milan, Milano; Irene Papadatou, IRCCS Bambino Gesu’, Roma; Sergio Amarri, University of Modena; Manila Candusso, IRCCS Burlo Garofalo, Trieste; Paolo Lionetti, University of Firenze.

The authors thank Dr Antonio Tursi for his constructive criticisms in preparing the manuscript.