AIM: To transfect mutant C-kit cDNA at codon 579 into human embryonic kidney cell line to observe its role in the pathogenesis of gastrointestinal stromal tumor (GIST).

METHODS: Eukaryotic expression vectors of pcDNA3-Kit-NW and pcDNA3-Kit-W were constructed. Then pcDNA3-Kit-NW and pcDNA3-Kit-W plasmids were transfected into human embryonic kidney cell line by Lipofectamine. The resistant clone was screened by G418 filtration and identified by sequencing, Western blotting, and immunocytochemical staining. Human embryonic kidney cells were divided into three groups including pcDNA3-Kit-NW, pcDNA3-Kit-W, and vector control groups. Absorbency value with a wavelength of 574 nm was detected by MTT analysis. Mice were injected with three groups of cells. Volume, mass, and histological examinations of the tumors in different groups were measured and compared.

CONCLUSION: Mutation of C-kit gene increases the proliferation activity of human cells and plays an important role in the malignant transformation of GIST.

Gastrointestinal stromal tumor (GIST) is a designation for a major subset of mesenchymal tumors of the gastrointestinal tract. Their line of differentiation or cell of origin and clinical behavior are a persistent source of controversy[1-5]. Recently, specific mutations between trans-membrane and tyrosine kinase domains in exon 11 at codon 550-560 of C-kit have been found in GISTs, which can lead to ligand-independent activation of the tyrosine kinase of C-kit and have a tumor promoting effect in vitro[4,6-10]. We studied the C-kit mutation type of exon 11 by PCR-SSCP and DNA sequencing in a series of Chinese GIST[11]. The results showed that C-kit mutations existed among GISTs. Compared to the reports in the published data, an insertion of 12 bp at codon 579 lies outside the hot spot area[12]. In order to fully characterize the activation of the insert mutation at codon 579 of C-kit gene, we constructed an expression vector containing mutant C-kit and evaluated its effect on implanted tumor in nude mice.

Human embryonic kidney cell (HEKC) line was established in our laboratory and prepared after long-term generation.

Eukaryotic expression vector of pcDNA3 (Invitrogen, USA), plasmid pMD18-T-KIT-NW containing full-length of C-kit gene (C-kit cDNA was conducted in our laboratory) and plasmid pMD18-T-Kit-NW containing mutant-type C-kit cDNA with insertion of 12 bp at codon 579 (mutant C-kit cDNA was conducted in our laboratory) were digested by restriction enzymes XbaI and HindIII. The digested vector and plasmid cDNA fragment were ligated. Recombinant clones were identified by XbaI and HindIII double digestion. Positive clones named pcDNA3-Kit-W and pcDNA3-Kit-NW were further confirmed by sequencing.

Transfection of recombinant plasmid into HEKCs and grouping

Cultured HEKCs were divided into three groups, which were transfected with pcDNA3 vector, recombinant pcDNA3-Kit-W, and recombinant pcDNA3-Kit-NW, respectively. Transfection was performed according to the instructions of Lipofectamine TM2000 reagent kit (Gibco). Cells were cultured in RPMI 1640 medium containing 200 mL/L fetal calf serum and 350 mg/L G418. Resistant clones could be detected 2 wk later.

HEKCs were inoculated in RPMI 1640 with 100 g/L fetal bovine serum and incubated at 37 °C in an incubator containing 50 mL/L CO2 to measure the logarithmic growth phase. After the treatment with digestive fluid, HEKCs were suspended by adding D-Hank’s fluid, deposited by centrifugation at 190 r/min for 5 min and then counted. Using RPMI 1640 containing 100 g/L fetal bovine serum, HEKCs were adjusted to a density of 5×104/mL and added to a 24-well plate containing flying sheets, 0.2 mL/well. Flying sheets were taken out respectively at 24, 48, and 72 h, fixed with cold acetone for 10 min, dried and preserved at -60 °C.

HEKCs with a density of approximately 2.5×105/mL were seeded into each well of the 96-well plate (0.2 mL/well). Each group contained 12 wells. After 4 d of incubation at 37 °C in an incubator containing 50 mL/L CO2, 50 mL of MTT (50 mg MTT) was added and the culture was continued for 4 h at 37 °C. After the fluid at the top was removed, 150 mL DMSO was added to each well. After being concussed and dissolved, absorbency value with a wavelength of 574 nm was detected by enzyme-labeled instrument (BioRad 2250, Japan).

Nine Balb/c male mice aged 4-6 wk (body mass 18-20 g) were purchased from Experimental Animal Center of Second Military Medical University, Shanghai and randomly divided into three groups, three mice in each group. The mice in vector-treated control group were injected with HEKCs transfected with pcDNA3 vector, the mice in Kit-W group received an injection of HEKCs transfected with recombinant pcDNA3-Kit-W, the mice in Kit-NW group received an injection of HEKCs transfected with recombinant pcDNA3-Kit-NW. After the cancer cells were cultured into the stage of logarithmic growth phase, they were digested with trypsin to make cancer cell suspension of 2.5×107/L. Then, 0.2 mL of each suspension was subcutaneously injected into the right back of the nude mice.

The survival of nude mice was observed every day. After tumor cell injection, the nude mice were killed after 6 wk. The surrounding fatty tissues were dissected and the tumors were weighed. Tumors were fixed in 10% buffered formalin and processed in paraffin wax. Five-micrometer thick sections were stained with hematoxylin and eosin.

Data were treated with SPSS for LSD and one-way ANOVA test. P<0.05 was considered statistically significant.

After digestion by XbaI and HindIII, bands at 3 kD could be detected for positive clones (Figure 1), suggesting that Kit-W and Kit-NW fragments were inserted into the pcDNA3 vector, named as recombinant plasmids pcDNA3-Kit-W and pcDNA3-Kit-NW, respectively. 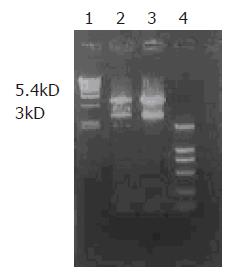 No significant differences were observed between the morphological characteristics of transfected cells and normal HEKCs. 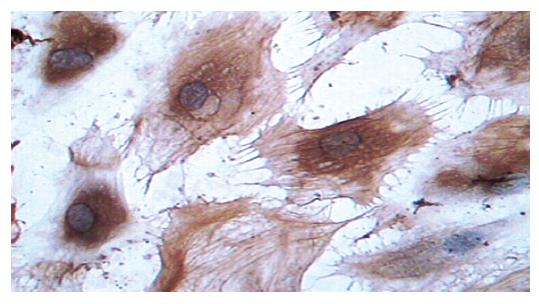 Tumors were observed in the nude mice 3 wk after being implanted with cells transfected with pcDNA3-Kit-NW (Figure 4). Mice had no visible tumor after cell injection in pcDNA3-Kit-W transfection group and vector control group after 6 wk. Tumor volumes in pcDNA3-Kit-NW transfection group were approximately similar and no significant difference was observed between the three tumors (t = 13.07 P>0.05). Many areas of hemorrhage and necrosis were present, residual tumor cells were frequently found to have giant, bizarre-shaped pyknotic nucleoli, or prominent pathologic mitosis in the tumors (Figure 5). 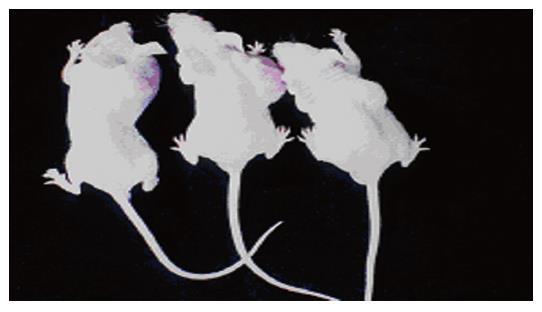 Figure 4 Tumor growth in nude mice 6 wk after being implanted with cells transfected with pcDNA3-Kit-NW. 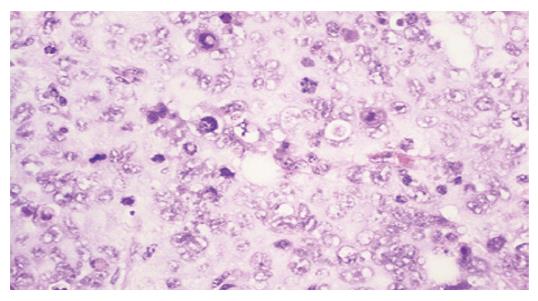 GIST is the most common mesenchymal tumor in human gastrointestinal tract and is enigmatic in terms of its differentiation or cell origin and clinical behavior. In recent years, C-kit protein expression and activated gene mutation have been found in GIST[13-17]. C-kit encodes a growth factor receptor with ligand-dependent tyrosine kinase activity[18,19]. Kit ligand-stem cell factor (SCF) is the only known ligand of the Kit receptor[20]. SCF binding to the receptor mediates receptor dimerization, activation of kinase activity, and autophosphorylation. Subsequently, Kit activates several signaling cascades, leading to cell proliferation, cell survival, and other cellular responses. Kit and SCF are encoded at the white spotting (W) and steel (Sl) loci in mice, respectively[20-22]. Mutation at the murine W and Sl loci generates deficiencies in several major cell systems during embryogenesis and in postnatal animals. In hematopoiesis Kit receptor signaling is critical in the stem cell hierarchy, erythropoiesis, mast cell development and function, megakaryopoiesis, and lymphopoiesis[23-26].

GISTs most often harbor mutations at exon 11 codon 550-560 of C-kit cDNA, while the mutations in human mastocytosis predominantly involve the activation loop of the Kit kinase[27,28]. The C-kit mutations in this domain can lead to spontaneous ligand-independent activation of the tyrosine kinase of C-kit and was called "gain-of-function mutation". Development of GIST is highly associated with Kit-activating mutations, suggesting that the activated Kit receptor plays a critical role in tumor development[29]. In addition, gene mutation has shown a good correlation with biologic behavior in such tumors. For instance, it can provide valuable adjunctive prognostic information. In agreement with this notion, familial cases of GIST have been reported with Kit-activating mutations in the germ line[30]. We have found a mutation at codon 579 in malignant GIST, which lies outside the hot spot area[12]. In order to fully characterize the activation of the insert mutation at codon 579 of C-kit gene, we studied the expression of mutant C-kit gene in human embryonic kidney cell line and its effect on implanted carcinoma in the nude mice.

In the present study, we constructed a target fragment containing mutant-type C-kit cDNA with insertion of 12 bp at codon 579 and full-length of C-kit gene. The target gene fragment of 5.4 kD in length was cloned into XbaI and HindIII restriction sites of eukaryotic expression vector pcDNA3. Restriction digestion and sequence analysis for positive clones indicated that the two recombinant eukaryotic expression vectors containing the gene were successfully constructed. These recombinant vectors were then transfected into HEKCs and screened by G418. The result of direct sequencing showed that the recombinant plasmids were stably integrated into the cells. Immunocytochemical staining revealed that HEKCs transfected with pcDNA3-Kit-W and pcDNA3-Kit-NW were stained positively for C-kit, indicating that C-kit protein is expressed in transfected HEKCs. Furthermore, a protein (145 kD) was detected by Western blotting and there was no significant difference in the expression level of C-kit protein between transfected pcDNA3-Kit-W and pcDNA3-Kit-NW HEKCs, indicating that the insert mutation at codon 579 of C-kit gene has no effect on protein expression of HEKCs.

In vitro characterization of the Kit V558 mutation in BaF/3 cells indicates that the Kit V558 mutation promotes cell proliferation and abolishes the growth factor dependence of BaF/3 cells[30]. Sommer et al[31]. showed that young bone marrow-derived mast cell cultures are refractory to growth factor deprivation-induced apoptosis. However, these cultures do not promote cell cycle progression. There is evidence that short kit protein product is more active than long Kit protein product. Therefore, it may be possible that the long-Kit variant is expressed predominantly in the young mutant bone marrow-derived mast cells, while the older cultures express the short-Kit variant, which may explain the progression from partial to complete growth factor independently of these cultures. Our results showed that the insert mutation at codon 579 of C-kit gene promoted HEKC proliferation. In addition, no significant differences between the morphological characteristics of transfected cells and normal HEKCs were observed, suggesting that mutant C-kit has no effect on the morphology of HEKCs.

In this experiment, HEKCs transfected with recombinant pcDNA3-Kit-NW and pcDNA3 vector were subcutaneously implanted into the nude mice. The implanted tumors appeared later in the pcDNA3-Kit-NW transfection group. Mice had no visible tumor after cell injection in pcDNA3-Kit-W transfection group and vector control group after 6 wk. These results suggest that the insert mutation at codon 579 of C-kit gene can significantly induce the growth of tumors and constitutive Kit signaling is critical and sufficient for the induction of neoplasia in the mice.