AIM: To evaluate the expression of fibrinogen-like protein 2 (fgl2) and its correlation with disease progression in both mice and patients with severe viral hepatitis.

METHODS: Balb/cJ or A/J mice were infected intraperitoneally (ip) with 100 PFU of murine hepatitis virus type 3 (MHV-3), liver and serum were harvested at 24, 48, and 72 h post infection for further use. Liver tissues were obtained from 23 patients with severe acute chronic (AOC) hepatitis B and 13 patients with mild chronic hepatitis B. Fourteen patients with mild chronic hepatitis B with cirrhosis and 4 liver donors served as normal controls. In addition, peripheral blood mononuclear cells (PBMC) were isolated from 30 patients (unpaired) with severe AOC hepatitis B and 10 healthy volunteers as controls. Procoagulant activity representing functional prothrombinase activity in PBMC and white blood cells was also assayed. A polyclonal antibody against fgl2 was used to detect the expression of both mouse and human fgl2 protein in liver samples as well as in PBMC by immunohistochemistry staining in a separate set of studies. Alanine aminotransferase (ALT) and total bilirubin (TBil) in serum were measured to assess the severity of liver injury.

CONCLUSION: The molecular and cellular results reported here in both mice and patients with severe viral hepatitis suggest that virus-induced hfgl2 prothrombinase/fibroleukin expression and the coagulation activity associated with the encoded fgl2 protein play a pivotal role in initiating severe hepatitis. The measurement of hfgl2/fibroleukin expression in PBMC may serve as a useful marker to monitor the severity of AOC hepatitis B and a target for therapeutic intervention.

Viral hepatitis remains a major public health problem and the most common type of liver disease worldwide[1,2]. There are an increasing number of patients with chronic hepatitis B who develop acute hepatitis on chronic condition (AOC) and die of acute hepatic failure both as a result of our lack of understanding of the pathogenesis of the disease and lack of effective treatment[3]. The hallmark of AOC is the extreme rapidity of the necro-microinflammatory process resulting in widespread or total hepatocellular necrosis in weeks or even in days[3]. Our previous studies have shown that macrophage activation and expression of fgl2, encoding a serine protease capable of directly cleaving prothrombin to thrombin, result in widespread fibrin deposition within the liver and hepatocyte necrosis[3-6]. The present study was designed to assess the expression of fgl2 and its correlation with disease progression in both mice and patients with severe viral hepatitis.

MHV-3 was purchased from the American Type Culture Collection (ATCC), plaque was purified on monolayers of DBT cells and grown to a titer of 1×106 PFU/mL in 17 CL cells. Viral titers were determined on monolayers of L2 cells by a standard plaque assay as described elsewhere[5].

The affinity-purified polyclonal antibody to both murine and human fgl2 prothrombinases was produced by 21 repeated injections into rabbits with a 14-amino-acid hydrophilic peptide (CKLQADDHRDPGGN) from exon 1 of the fgl2 prothrombinase coupled to keyhole limpet hemocyanin. Rabbit brain thromboplastin was purchased from Sigma Chemical Company (St. Louis, MO, USA).

All animal experiments were carried out according to the guidelines of the Chinese Council on Animal Care and approved by the Tongji Hospital of Tongji Medical College Committees on Animal Experimentation. The research protocol was reviewed and approved by the Hospital Institutional Review Board of Tongji Hospital, Huazhong University of Science and Technology, Wuhan, China. All mice were housed in the animal facility in Tongji Hospital. Mice received 100 PFU of MHV-3 by intraperitoneal injection. The liver and serum were collected from both Balb/cJ and A/J mice 0, 24, 48, and 72 h after intraperitoneal injection of MHV-3.

Immunohistochemical staining was performed with a rabbit polyclonal antibody against the fgl2 prothrombinase as described previously[3,6].

PBMC and white blood cells (WBC) were evaluated for functional PCA in a one-stage clotting assay. Freshly isolated PBMC and WBC were washed twice with PBS (pH 7.0) and resuspended at a concentration of 106/mL. Samples were assayed for the ability to shorten the spontaneous clotting time of normal citrated human platelet-poor plasma. Milliunits of PCA were assigned by reference to a standard curve generated with serial log dilutions of a standard rabbit brain thromboplastin as described previously[2].

Quantitative data were expressed as mean±SD. Statistical analysis was carried out by one-way analysis of variance. P<0.05 was considered statistically significant.

Small and discrete foci of necrosis with sparse polymorphonuclear leukocyte infiltrates were seen 12-24 h after MHV-3 infection. After 48 h, the area of these lesions enlarged and became confluent necroses (Figures 1A and 1B). There was no evidence of necrosis in the livers of MHV-3 infected A/J mice (Figure 1C). In Balb/cJ mice, serum ALT and TBil levels increased after 16-24 h, peaked at 72 h and remained elevated thereafter, while there were no significant ALT and TBil changes in MHV-3-infected A/J mice (Figures 2A and 2B). 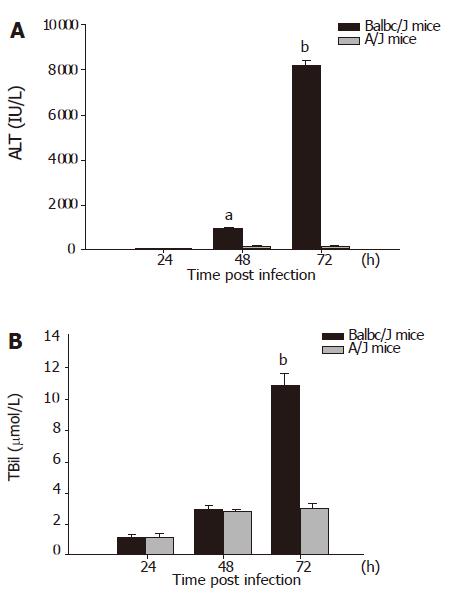 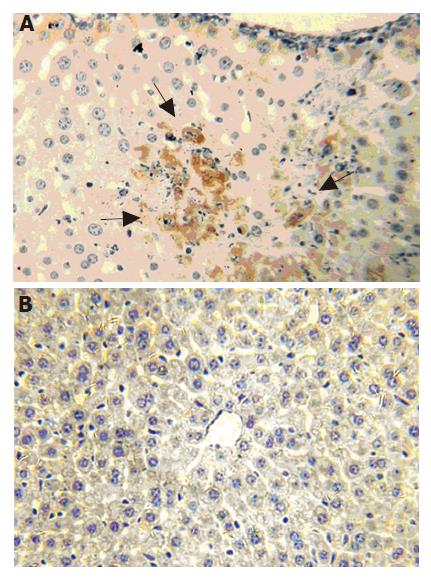 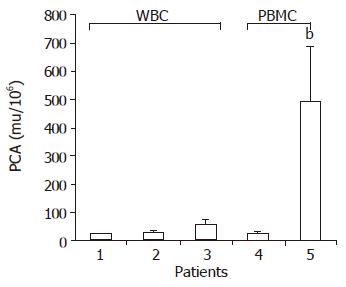 Hfgl2 expression both in liver and in PBMC was semi-quantified by a MPIAS-500 scanning analysis system. The data indicated that there was a close correlation between hfgl2 expression and the severity of the disease as shown in Figures 6A and 6B. 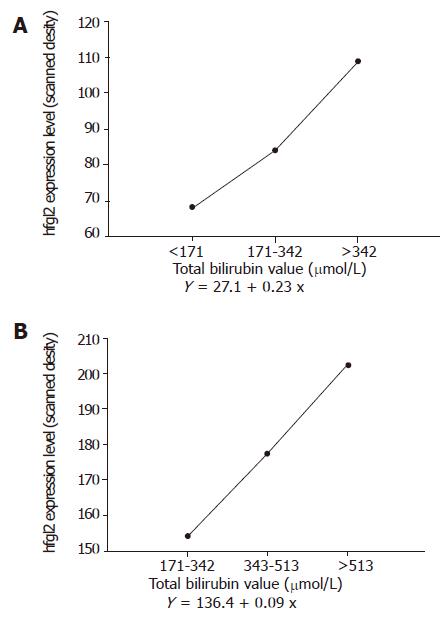 Figure 6 Correlation of hfgl2 expression in liver (A) and PBMC (B) with serum TBil level.
DISCUSSION

The inability to propagate human hepatitis viruses in culture and the lack of suitable animal models have impeded the determination of the pathological mechanisms of fulminant hepatic failure (FHF). However, animal models of FHF induced by murine hepatitis virus strain 3[4,7], transgenic models of hepatitis B virus infection[8,9] and clinical cases of FHF have provided insights into the pathogenesis of viral FHF[3,6]. MHV-3 produces a broad spectrum of diseases, including pneumonitis, encephalitis, enterocolitis, nephritis, and hepatitis[10,11]. This report demonstrated that Balb/cJ mice after MHV-3 infection developed fulminant viral hepatitis. HE staining showed infiltration of lymphocytes and massive hepatic necrosis in association with mfgl2 expression in the endothelial cells of hepatic sinusoids and in areas of focal necrosis. The serum ALT and bilirubin levels reflected the damage of liver tissue in MHV-3-induced FHF in Balb/cJ mice. In contrast, there was no or only minor hepatocyte injury with no mfgl2 in MHV-3-infected A/J mice. Therefore, these results further demonstrate that though MHV-3 replicates in tissues of both resistant and susceptible animals, suggesting that host factors may be more critical than viral replication in the pathogenesis of MHV-induced hepatitis. Our previous study have demonstrated that MHV-3 infection of macrophages results in transcription of host inflammatory cytokines, including TNF-α, IL-1, and superoxides[4]. Cytokines can play an important role in the course of inflammatory injury in vivo, and interference with their action can alter the course of inflammatory diseases[12-15]. The importance of mfgl2 prothrombinase in the pathogenesis of MHV-3 infection is supported by the observation that a neutralizing antibody to this protein prevents fibrin deposition and protects mice from the lethality of MHV-3 infection. Furthermore, mfgl2 knockout mice lack fibrin deposition and liver necrosis and survival increased from 0% to 33%[3,16].

In conclusion, MHV-3-induced hfgl2 prothrombinase/fibroleukin expression and the potent function of the protein it encodes play a pivotal role in initiating both acute and fulminant hepatitis on chronic liver injury. The measurement of hfgl2 expression in PBMC may serve as a useful marker to monitor the severity of AOC hepatitis B and a target for therapeutic intervention.