AIM: To evaluate the usefulness of three-dimensional computed tomography (3DCT) in laparoscopic surgery for colorectal carcinoma.

METHODS: Seventy-two patients with colorectal cancer who underwent curative operation at our hospital were enrolled in this study. They were classified into two groups by operative procedures. Sixteen patients underwent laparoscopic surgery, laparoscopic group (LG), while 56 patients underwent conventional open surgery, open group (OG). At our institution, contrast-enhanced CT is routinely performed as part of intra-abdominal screening and the 3D images of the major regional vessels are described. We have previously described about the preoperative visualization of the inferior mesenteric artery (IMA) by 3DCT. This time we newly acquired 3D images of the superior mesenteric artery (SMA)/superior mesenteric vein (SMV), ileocecal artery (ICA), middle colic artery (MCA), and inferior mesenteric vein (IMV). We have compared our two study groups with regard to five items, including clinical anastomotic leakage. We have discussed here the role of 3DCT in laparoscopic surgery for colorectal carcinoma.

RESULTS: The mean length of the incision in LG was 4.625±0.89 cm, which was significantly shorter than that in OG (P<0.001). The association between ICA and SMV and SMA was described in the right-sided colectomy. The preoperative imaging of IMA and IMV was created in the rectosigmoidectomy. There was no significant difference in anastomotic leakage between the two groups, but no patients in LG experienced anastomotic leakage.

CONCLUSION: Most of the patients are satisfied with the shorter incisional length following laparoscopic surgery. Preoperative visualization of the major regional vessels may be helpful for the secure treatment of the anastomosis in laparoscopic surgery for colorectal carcinoma.

Laparoscopic colectomy has been generally accepted, and the instruments and techniques have been developed considerably. The advantages of laparoscopic approaches include shorter hospital stay, quicker return of gastrointestinal function, less pain, fewer wound complications, and quicker recovery[1-6]. However, laparoscopic colorectal surgery for malignancies requires the use of advanced surgical techniques that entail a long learning curve[7,8]. In right-sided colon cancer, the regional anatomy is relatively complicated[9]. In the lymph node dissection around the surgical trunk, it is important to recognize two patterns in the relationship between the ileocecal artery (ICA) and the superior mesenteric vein (SMV). One pattern is that the ICA is in front of SMV (Type A), and the other is that ICA is in back of SMV (Type B)[10]. A previous study have described about the risk of more anastomotic leakage in the converted laparoscopic colorectal surgery compared to the conventional open surgery[11]. In laparoscopic colorectal surgery, understanding of the anatomical orientation, including the regional vessels, is important. We have previously reported that preoperative visualization of the inferior mesenteric artery (IMA) by three-dimensional computed tomography (3DCT) is useful in colorectal surgery[12]. In this study, we have described about the three-dimensional (3D) images of the other major visceral vessels, such as the superior mesenteric artery (SMA), SMV, ICA, middle colic artery (MCA), and inferior mesenteric vein (IMV). Here, we have evaluated the efficacy of 3DCT in performing laparoscopic colorectal surgery for carcinoma.

Between April 2002 and March 2005, 72 patients with colorectal cancer underwent curative surgery at our hospital. Operative procedures were laparoscopic colorectal surgery [laparoscopic group (LG); 16 patients: 5 men and 11 women] and open colorectal surgery [open group (OG); 56 patients: 32 men and 14 women]. The mean age was 66.6±7.4 years (range, 52-83 years) in LG and 68.2±11.3 years (range, 36-91 years) in OG. The following data were examined and compared between LG and OG: (1) patient's age and gender; (2) Duke’s staging; (3) presence of the postoperative ileus; (4) length of incision for exteriorization and resection of the specimen; (5) wound infection; and (6) clinical anastomotic leakage.

Contrast-enhanced CT is routinely performed to screen for intra-abdominal malignancies before the surgery at our hospital. Dual-phase helical CT was performed with a high-speed scanner [multi-detector CT (MDCT); Aquilion M8, Toshiba Medical Systems Co., Ltd, Tokyo, Japan] on the patients. During each phase, scanning was performed in a single breath-hold. Dual-phase helical CT data were then transferred to a Zio M900 workstation (Ziosoft, Inc., Morgan Hill, CA, USA), and 3DCT images of the major visceral vessels, such as SMA, SMV, ICA, IMA, and IMV, were reconstructed. The detailed imaging techniques have been described in the previous literatures[12,13]. In right-sided colectomy, the association between ICA and SMV, the variation of the right colic artery (RCA) and the image of the middle colic artery were confirmed by 3DCT before the surgery. In the resectioning of advanced sigmoid colon and rectal cancer, we routinely dissect the lymph nodes around the root of IMA while preserving the left colic artery (LCA), because resection of the root of IMA occasionally causes ischemia of the oral side of the sigmoid colon, sometimes leading to anastomotic leakage[12].

Data were expressed as the mean±SD. Statistical analysis was performed using Mann-Whitney U test, χ2 and Student’s t-test. P values of less than 0.05 were considered statistically significant.

There was no significant difference in age, gender, Duke’s staging, presence of the postoperative ileus or wound infection between the LG and the OG (Tables 1 and 2). The mean length of incision in the LG (4.625±0.885 cm) was significantly shorter, than that in OG (15.91±2.51 cm, P<0.001). Three patients in OG experienced anastomotic leakage, while no patients in LG experienced it. However, there was no statistically significant difference in anastomotic leakage between these two groups. Two of the three patients undergoing anastomotic leakage in OG suffered from advanced rectal cancer. The root of IMA was resected because of the wide-ranging lymph node metastasis. In one of the two patients, lymph node metastasis spread around the marginal vessels of the sigmoid colon.

Preoperative visualization of the ICA in front of the SMV (Type A) and that in back of the SMV (Type B) is shown in Figures 1A and 2A, respectively. The variation of the RCA and MCA was evaluated. Intraoperative findings of the association between ICA and SMV are shown in Figures 1B, 2B and C. Figure 3 shows the MCA diverging at a more peripheral portion of SMA than usual. The image of IMA and LCA to be preserved can be seen (Figure 4A). The intraoperative findings are shown in Figure 4B. Preoperative visualization of the essential vessels was described in all the patients undergoing contrast-enhanced CT. 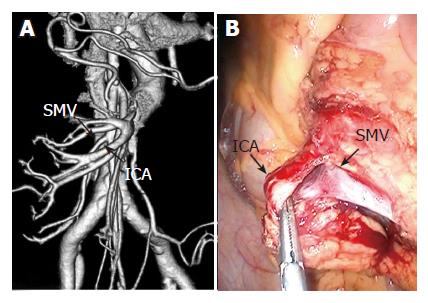 Figure 1 ICA situated in front of SMV at 3DCT (A) and at intraoperative findings (B). 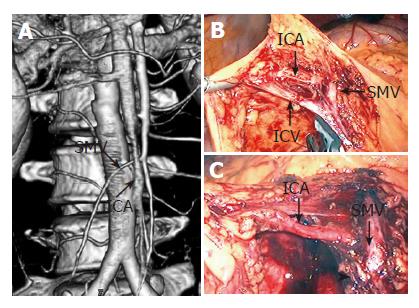 Figure 2 ICA situated in back of SMV at 3DCT (A) and at intraoperative findings (B); C: ICA existed after the ileocecal vein (ICV) had been resected. The arrow head shows the cut end of the ICV. 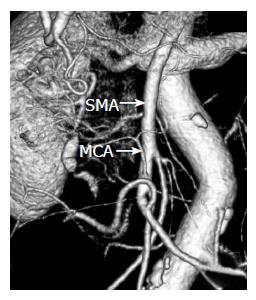 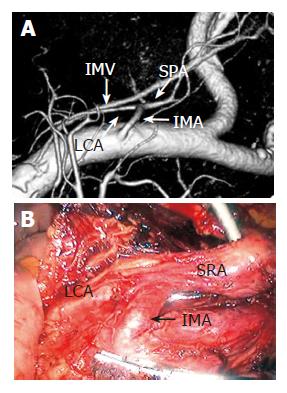 Figure 4 Three-dimensional images of the IMA, the IMV, the LCA and the superior rectal artery (SRA) were obtained (A) and were helpful in resecting the SRA (B).
DISCUSSION

Laparoscopic approaches have been widely applied, but laparoscopic colorectal surgery for carcinoma is not yet a proven operation[1]. There exists some controversies about the safety of the operation[14,15], the oncological results[16,17] and the long-term survival rate[18]. Recently, a number of studies have shown a favorable outcome of laparoscopic surgery for colon cancer[19-23]. There appears to be no significant differences in perioperative complications between laparoscopic and open colorectal surgery[24]. In our study, we acquired the same results in the presence of postoperative ileus and wound infection. The mean length of the wound used for the extraction of specimens in LG was significantly shorter than that in OG. Most of the patients in LG were satisfied with the shortness of the incisional length during the perioperative period and the subtlety of the incisional scar during the follow-up period, as they had said[25]. In addition, laparoscopic surgery has been found to be associated with significantly decreased intraoperative blood loss and postoperative complications[19,26]. The anastomotic leak rate reported in a larger series of laparoscopic anterior resection was considerably less than 10%, which was comparable to that of conventional open anterior resection[18,27]. To date, the laparoscopic approach for colorectal surgery is not associated with a higher risk of anastomotic leaks[28]. In a previous report, four instances (25%) of clinical anastomotic leakage occurred in patients in whom the laparoscopic dissection had been difficult[11]. For the prevention of leakage, it is essential that there is a good supply to the colorectal anastomosis site[29]. Therefore, we preserve the LCA when dissecting lymph nodes around the root of IMA. Understanding the vascular anatomy of the regional vessels is important[12]. Preoperative visualization of SMA/SMV, ICA, MCA or IMA/IMV is crucial when performing a right-sided colectomy or a rectosigmoidectomy. Recently, a new generation of MDCT has been used in clinical practice[30]. At our hospital, MDCT has been performed not only to examine intra-abdominal malignancies, but also to provide preoperative visualization of the regional vessels. At our institution, no patients in LG had experienced anastomotic leakage, while three patients in OG experienced so. Ischemia of the oral side colon may have caused anastomotic leakage. There was no significant difference in anastomotic leakage between LG and OG, suggesting that preoperative visualization in laparoscopic surgery may be helpful in the prevention of anastomotic leakage. MDCT scanning is performed in a single breath-hold during each phase. In the past, there was a significant delay before roentgen engineers could show us the 3D images of the regional vessels, but now they are able to provide 3D images promptly after CT scanning. Having 3D images of SMA/SMV, ICA, MCA, and IMA/IMV lead to a more secure treatment of the regional vessels in laparoscopic surgery for carcinoma.

In conclusion, we suggest that preoperative visualization of the major regional vessels may have advantages in laparoscopic surgery for colorectal carcinoma.