AIM: To investigate the usefulness of sucrose permeability test using serum in the diagnosis of gastric diseases, with special reference to early gastric cancer (EGC).

METHODS: A total of 63 subjects, including 11 patients with gastric ulcer, 20 patients with gastric cancer (13, early; 7, advanced) and 32 healthy controls, were studied. Blood and urine samples were collected repeatedly for 5 h before and after the sucrose loading. Sucrose levels were measured by a newly developed enzymatic method.

CONCLUSIONS: The gastric permeability test using serum is reliable for the detection of EGC, and this test can provide results much earlier than the conventional urine method. This test may offer a useful alternative to more invasive tests for EGC.

In 1993, Meddings et al[1], proposed the sucrose permeability test as a new non-invasive test for evaluating gastroduodenal injury. This test is based on the principle that sucrose does not permeate the healthy gastric mucosa and is rapidly dissolved in the small intestine, whereas it permeates and is absorbed through sites of injury in the stomach, enters the bloodstream and is excreted into the urine. It is reported that this test is useful for diagnosing gastric ulcer or gastroduodenal injury caused by NSAIDs or steroids[2-6]. Furthermore, it has been demonstrated that sucrose permeability is elevated by infection with H pylori or celiac disease, reflecting mucosal injury associated with inflammatory cell infiltration; thus, the usefulness of this test in evaluating gastroduodenal injury has been established[4,7,8].

However, the conventional method is not practical for outpatients or for health screenings because urine must be collected for 5 h or longer after the sucrose loading. If the sucrose test could be done in a shorter period of time, its clinical usefulness would increase.

We recently developed a novel enzymatic assay that is sensitive enough to determine serum levels of sucrose accurately[9]. The changes of serum sucrose levels after ingestion in patients with gastric diseases, as in healthy subjects, are unknown. Therefore, the first aim of this study was to investigate the changes of serum sucrose levels in healthy subjects, patients with gastric ulcer and gastric cancer. The second aim was to identify the most suitable time to collect serum samples for the detection of gastric disease.

The gastric mucosa was resected in patients with EGC, when considered, on the basis of endoscopic diagnosis including endoscopic ultrasonography, to be an intramucosal lesion. In two cases of EGC that were judged to have invaded as far as the deep submucosa, and in five cases of AGC, surgery was performed, while the remaining two cases were treated non-surgically. Two cases in which the depth of invasion could not be determined histopathologically were diagnosed endoscopically as AGC. Patients with diabetes mellitus or reduced renal function were excluded.

Informed consent was obtained from every subject. This study was performed with the approval of the Ethical Committee of Chiba University School of Medicine, Japan.

After an overnight fast, patients and HV were given a solution composed of 100 g sucrose and 450 mL water for 15 min. Blood samples were collected before and at 15, 30, 45, 60, 75, 90, 120, 180, 240, and 300 min after the sucrose loading. The blood samples were immediately centrifuged and the sera were obtained. Simultaneously, urine was collected for over a period of 5 h after the sucrose loading and the amount of sucrose excreted during the 5-h period was obtained from the volume of urine and the concentration of sucrose. Sera and urine were stored at -20 °C until the assay.

Sucrose was phosphorylated by the action of sucrose phosphorylase. The subsequent reaction in the presence of phosphoglucomutase and glucose-1, 6-diphosphate formed glucose-6-phosphate. Finally, the sucrose of the monad formed the dyad thio-NADPH. The reaction was monitored by changes in absorbance at 405 nm. The details of the assay procedures are published elsewhere[9].

Data were expressed as mean±SE. Using ANOVA, the serum sucrose concentration before and after the administration of sucrose in each group was compared. Serum sucrose concentrations at each sampling time within each group and comparison by the urine collection method within each group were compared using Tukey's method. Comparison of diagnostic ability based on areas under the receiver operator characteristics (ROC) curve at each sampling point was carried out using Hanley's method[10]. Cut-off points based on the ROC curve at each time point were set to obtain sensitivity, specificity, and accuracy. The surface area of GC was calculated using the formula (1/4×π×long diameter×short diameter) on the assumption that the tumor was elliptical. The relationship between the surface area of EGC and the serum sucrose level was determined. A two-sided P value <0.05 was considered statistically significant. 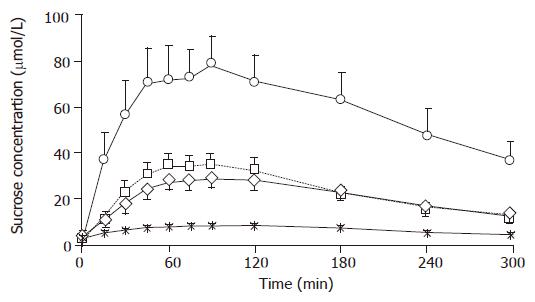 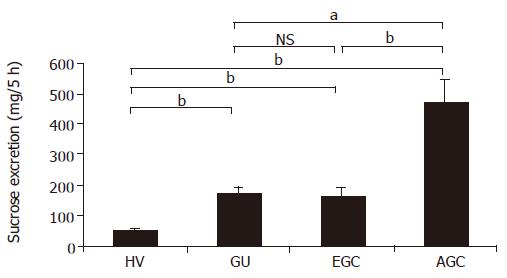 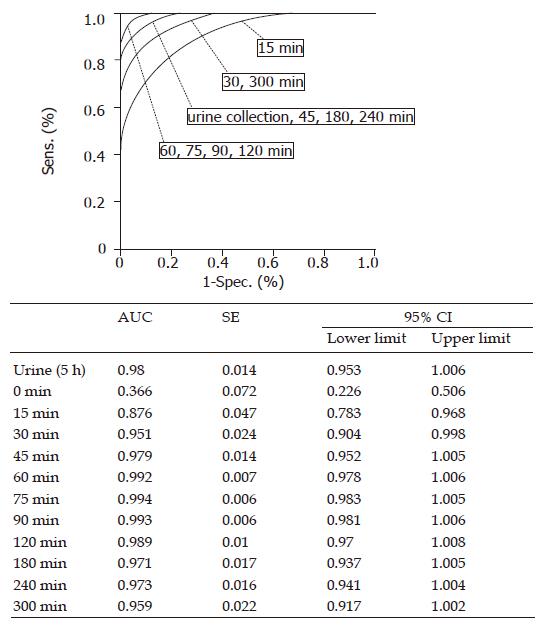 Figure 3 Receiver operator characteristics (ROC) curve and AUC of ROC curve. Comparison of the ROC curve of the sucrose test and AUC at each time point. There was no significant difference between the urine collection method and the serum method from 30 to 300 min. AUC: Area under the ROC curve; SE: standard error; CI: confidence interval.

Cut-off points for the detection of gastric disease at each sampling time in the serum method were obtained from the ROC curves, and the diagnostic value of this method was also obtained. Similarly, cut-off points and diagnostic values were obtained by the urine collection method (Table 2). The cut-off points for the detection of gastric disease by the serum method over 60 min was 15.4 μmol/L and that of the urine collection method was 95 mg. Serum sucrose levels of the four studied groups at 60 min are shown in Table 3.

There was a significant correlation between the surface area of GC and the serum sucrose level (60 min) (r = 0.83) (Figure 4). 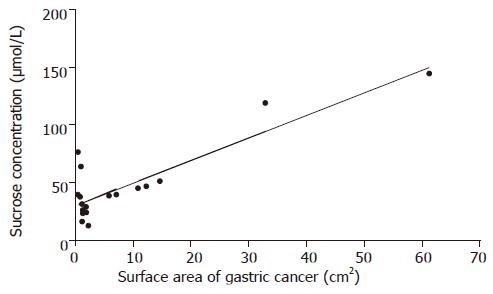 The sucrose permeability test is a valuable noninvasive test for detecting gastroduodenal injury[1-8,11-13]. The conventional method involves measuring the amount of sucrose excreted into the urine for over a period of as long as 5 h following the administration of sucrose. If this test could be done more quickly, its clinical usefulness would increase greatly.

Vinet et al[14] reported that the serum concentrations of sucrose after sucrose loading in volunteers whose stomachs had been injured by NSAIDs or alcohol clearly increased, and that this occurred only after 15-45 min. We considered that it might be useful in clinical practice to measure the sucrose concentration in the serum instead of the urine. However, the pattern of the changes of serum sucrose levels after sucrose ingestion either in healthy subjects or in patients with gastric diseases was unknown. Moreover, the appropriate time point for collecting serum samples was not known, nor was the usefulness of serum testing for detecting gastric diseases. We conducted this fundamental study for these reasons.

We took advantage of a novel enzymatic method that we had recently developed for measuring serum sucrose levels. Previously, the concentration of sucrose in biological fluids was measured by high-performance liquid chromatography (HPLC) with an electrochemical technique for detection[1-7,11], or by an enzymatic assay[8,14,15] in which invertase hydrolyzes sucrose to fructose and glucose, and then the glucose is measured using a hexokinase procedure with reduced nicotinamide adenine dinucleotide phosphate formation. But the invertase method is not applicable to serum samples because of interference by the glucose in the samples. The HPLC method is accurate and widely used, but is labor-intensive, costly, and time-consuming.

We collected blood specimens at 11 different sampling times from 63 individuals and examined the changes in serum sucrose and the time point appropriate for the detection of mucosal injury. There was no significant difference in diagnostic value between the urine collection method and the serum method at any determined time point between 30 and 300 min. Thus, it may be possible to detect a gastroduodenal injury using serum at any determined point between 30 and 300 min after sucrose loading. In particular, because the accuracy at 60, 75, 90, and 120 min was greater than 95%, which was higher than that for the urine collection method, it should be satisfactory to carry out sampling for the serum method only at 60 min in order to obtain more reliable results more quickly. On the basis of these results, we were able to shorten the sucrose test, and to increase its diagnostic accuracy.

All cases of GU were detected when the serum method was carried out for 60 min. Although GU is a benign disease, medical treatment is essential, and GU must be distinguished from cancer. In this respect, the high detection rate of GU by the serum method will not reduce the significance of this test for the screening of gastric cancer.

The average age of patients with GC in this study was higher than those of HV and GU patients, but there was no significant age-related difference in the sucrose level within each group (data not shown), because the inter-group age differences had little effect on the outcome.

We observed a significant relationship between the surface area of the gastric cancer and sucrose permeability even in cases without ulcer formation. This observation is exceedingly interesting and indicates some process of active absorption of sucrose through unhealthy gastric mucosa. This finding should be tested in vitro.

Using the conventional urine collection test for sucrose permeability, Kawabata et al[11] reported an abnormally high sucrose permeability in 11 of 12 patients with advanced gastric cancer, which was significantly higher than that of a healthy control group. However, the diagnostic significance of this test for patients with early gastric cancer has not been elucidated. The results of our study clearly demonstrated that the sucrose test can detect not only AGC but also EGC.

When early gastric cancers are limited to the mucosal layer, they are frequently subjected to endoscopic submucosal dissection (ESD), and can be treated without conventional surgery[16,17]. In this study, 10 of the 11 patients who underwent ESD showed positive results with the sucrose test.

Gastric cancer is the second largest cause of cancer death throughout the world[18]. Contrast-enhanced upper gastrointestinal radiography has been widely used as the screening test for gastric cancer in Japan, but its diagnostic value regarding EGC is considered to be low[19]. The serum pepsinogen method is a new screening test for gastric cancer, but it was reported that the test failed to detect a considerable proportion of patients with advanced gastric cancer[19,20]. In this study, our results clearly demonstrated that the sucrose test on the serum had a higher sensitivity rate for EGC than any other non-invasive test reportedly used for screening purposes. Furthermore, the diagnostic sensitivity of the test for AGC was 100%.

In conclusion, the sucrose test conducted on the serum is a very promising screening test for gastric cancer. Since the serum method can be performed much more easily with an automatic analyzer, it can be used for mass screening of a large number of samples. Confirmatory large-scale prospective studies comparing this method with other methods used in mass screenings are still needed before definite recommendations can be made regarding the significance of the test in screening for gastric cancer, especially EGC.

We thank Shino-Test Corporation for the supply of enzymatic assay reagents.