The clinical diagnosis of classic Crohn’s disease (CD) of the small bowel is based on a typical history, tender right lower quadrant fullness or mass, and characteristic radiographic findings of the terminal ileum. Appendicitis may as well present with chronic or recurrent symptoms and this presentation may be confused with CD. We herein describe the case of a young teenage girl with a presumptive diagnosis of CD, who was ultimately diagnosed as having chronic nongranulomatous appendicitis. The literature on the subject is reviewed.

Crohn’s disease (CD) is a chronic transmural inflammation, which may involve any part of the alimentary tract from mouth to the anus. CD typically affects the ileum, colon, or perianal region[1]. The clinical diagnosis of classic CD of the small bowel is based on a typical history, tender right lower quadrant fullness or mass, characteristic radiographic findings of the terminal ileum and endoscopic findings. Although granulomas are regarded as the characteristic feature of CD, their absence does not rule out the diagnosis[1]. Only half of the documented cases of CD reveal epithelioid granulomas in surgical specimens[1]. CD can involve the appendix by extension from the terminal ileum or the cecum and present as an acute or subacute appendicitis. About 25% of patients with ileal CD and 50% of those with colonic Crohn’s disease have appendiceal involvement[2]. A clinical picture similar to acute appendicitis is not an uncommon presentation of Crohn’s disease.

Among the inflammatory diseases of the right lower quadrant that may mimic CD, acute appendicitis is the most common and potentially the most dangerous one. The principal distinguishing features of acute appendicitis are its onset without any pre-existing history of chronic bowel symptoms and the change in the location of pain and tenderness from epigastrium to the right lower quadrant (RLQ)[1]. Appendicitis, however, may present with chronic or recurrent symptoms and this presentation may be confused with CD. Although an entity of recurrent attacks of RLQ pain, apparently self-limiting, is not infrequently encountered, the entity of chronic or recurrent appendicitis is controversial[3-7]. Nevertheless, it is probably an authentic clinical and pathologic entity[3-15]. Intermittent bouts of obstruction of the appendiceal lumen with spontaneous remission may be the cause[4]. True chronic inflammation of the appendix is difficult to define as a pathologic entity, although occasionally granulation tissue and fibrosis associated with acute and chronic inflammation of the appendix are demonstrated, suggesting an organizing acute appendicitis[16]. In the pediatric population, children with cystic fibrosis can develop chronic appendicitis due to mucous engorgement of the lumen. The occurrence of chronic appendicitis in otherwise healthy children is nevertheless debatable[6].

Herein, we have described the case of a young teenage girl with a presumptive diagnosis of CD, who was ultimately diagnosed as having chronic non-granulomatous appendicitis. The literature on the subject has been reviewed.

A 17-year-old girl presented to our pediatric emergency room because of persistent RLQ abdominal pain. She had been previously healthy. Three weeks prior to admission, she was admitted to another hospital for severe RLQ pain. A computerized tomography (CT) scan of the abdomen with barium contrast showed a bowel conglomerate in the cecal area and a stricture of the distal ileum. A presumptive diagnosis of CD was made and the patient was discharged on 5-ASA, antibiotics and steroids. Colonoscopy, performed a week later, showed no gross pathology and the treatment was discontinued. Biopsy samples from the colon and terminal ileum were normal.

She was admitted to our Pediatric Department because of the continuation of RLQ abdominal pain, recurrent non-bilious vomiting and a 6-kg weight loss over 2 wk.

Laboratory results are shown in Table 1 (1st admission). Abdominal ultrasound (US) was normal; a gynecological US showed a left ovarian cyst and a tubular structure in the RLQ. An upper gastrointestinal and barium follow-through study showed a stricture of an ileal loop without involvement of the terminal ileum. This finding was considered to be compatible with CD (Figure 1). Gastroscopy showed gastritis with hemorrhagic areas in the body and antrum. A quick urease test for H pylori was negative. Biopsies from the antral mucosa showed remodeling of the foveolar layer, regeneration, atypia, and mild chronic inflammation. Biopsies from the small bowel, gastric corpus and esophagus were normal. 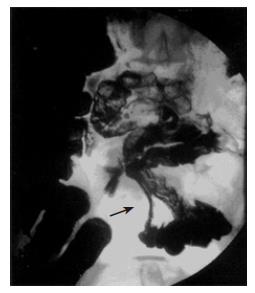 Figure 1 Upper gastrointestinal and barium follow-through study showing a stricture of an ileal loop without involvement of the terminal ileum (arrow).

Despite the absence of characteristic histological findings of CD, the clinical presentation and the radiological findings were thought to be compatible with CD and therefore oral steroids and omeprazole were prescribed with resolution of symptoms.

Four weeks later, she was readmitted because of a 24-h history of abdominal pain mainly over the RLQ, fever of 39 °C and non-bilious vomiting.

Physical examination revealed a sick-looking girl having 37.8 °C temperature, 47.5 kg body weight and severe diffuse tenderness over the right lower abdomen. Laboratory results are shown in Table 1 (2nd admission). Abdominal X-ray was normal. Abdominal US showed a thickened bowel loop located over the RLQ. A repeat CT of the abdomen with contrast media showed a bowel conglomerate in the cecal area and a stricture of the distal ileum similar to the findings previously demonstrated. No signs of appendicitis or periappendicular abscess were noted (Figure 2). After 5 d of intravenous treatment with steroids, ciprofloxacin, and metronidazole, the patient’s symptoms and clinical signs improved and she was discharged on oral steroids and azathioprine. 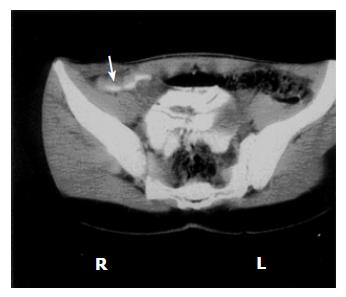 Figure 2 Abdominal CT with contrast media showing a bowel conglomerate in the cecal area and a stricture of the distal ileum (arrow).

For the following 2 mo, the patient was asymptomatic. She was gradually weaned from steroids and maintained on azathioprine. She was then readmitted because of abdominal pain and non-bilious vomiting for 10 d. She had no fever or diarrhea, her appetite was poor and had a 1 kg weight loss. Her physical examination revealed severe diffuse tenderness over the right abdomen. Laboratory results are shown in Table 1 (3rd admission). Budesonide was started and the azathioprine dose was decreased due to abnormal liver enzymes. She was discharged after a clinical improvement but readmitted a week later due to vomiting and epigastric and RLQ pain for 4 d. Laboratory results are shown in Table 1 (4th admission). Gastroscopy showed a mild inflammation with normal antral and duodenal biopsies. A diagnostic laparoscopy showed a phlegmonous appendicitis and an appendectomy was performed. No other abnormality was noted and the ileum appeared to be normal. Histological examination of the appendix and terminal ileum showed periappendicular inflammation and normal small bowel. No granulomata were found. A diagnosis of chronic appendicitis mimicking CD was made. Follow-up of 4 years showed a healthy asymptomatic girl.

Controversy and skepticism surround the diagnoses of chronic and recurrent appendicitis[3-6]. Nevertheless, a sufficient histological and radiological evidence to support that this entity exists[3-16].

Mattei et al[14] reviewed a series of seven patients matching the criteria of chronic or recurrent appendicitis and concluded that recurrent and chronic appendicitis should be considered in the differential diagnosis of recurrent or non-resolving lower abdominal pain. Barber et al[3], in their retrospective study encompassing 1 084 patients who had inflamed appendices removed, found that 6.5% of them had attended the emergency ward prior to their operation for symptoms compatible with recurrent appendicitis. Our patient had clinical and radiological findings compatible with Crohn’s ileitis, without evidence of acute or chronic appendicitis on US and CT. It has been suggested that these modalities can aid diagnosis in questionable situations[1]. Although there was no histopathological evidence of CD at biopsy, the clinical manifestations, the radiological findings and the response to treatment supported the diagnosis.

Consideration was also given to the diagnosis of isolated CD of the appendice, an uncommon chronic appendicitis with histological findings (granulomas) resembling a CD[2]. This rare presentation of CD is confined to the appendice and progression to systemic disease is rarely noted. The reluctance to intervene surgically in a patient with a suspected CD is another barrier to diagnosis.

Considering the data presented, chronic or recurrent appendicitis seemed to be the probable diagnosis. It must be considered in every case of unexplained long-standing or recurrent abdominal pain over RLQ. The great improvements in laparoscopic techniques should be valuable in those cases where endoscopical, histological and radiological findings do not provide a definitive answer.