AIM: To screen the immunogenic membrane proteins of Shigella flexneri 2a 2457T.

METHODS: The routine two-dimensional polyacrylamide gel electrophoresis (2-DE) and Western blotting were combined to screen immunogenic proteins of S. flexneri 2a 2457T. Serum was gained from rabbits immunized with the same bacteria. Immunogenic spots were cut out from the polyacrylamide gel and digested by trypsin in-gel. Matrix-assisted laser desorption/ionization time of flight-mass spectrometry (MALDI-TOF-MS) was performed to determine the molecular weight of peptides. Electrospray ionization (ESI-MS/MS) was performed to determine the sequences of the interesting peptides.

RESULTS: A total of 20 spots were successfully identified from Coomassie brilliant blue stained gels representing 13 protein entries, 5 known antigens and 8 novel antigens. A hypothetical protein (YaeT) was detected, which might be a candidate target of vaccine.

CONCLUSION: Membrane proteins of S. flexneri 2a 2457T were successfully observed by 2-DE. Several known and novel antigens were identified by mass spectrum.

The genus Shigella spp. is a group of Gram-negative enteric bacilli which cause bacillary dysentery in human beings, accounting for 20% of the 4.6 million diarrhea-associated deaths among children[1]. Though the LPS can induce a good immune response in human beings, the role of proteins (especially the membrane proteins) in conferring immunity to shigellosis is at best speculative. Considering outer membrane proteins of Shigella spp. function as a dynamic interface between the cell and its surroundings, it is possible to develop new antigens from them. Due to the methodology limitations of protein separation and identification, it is difficult to identify the immunogenic proteins in bands on 1-D gel. With the improvement of 2-DE in recent years much valuable information is available and immunoproteomics has been built around 2-DE and routine immunologic technologies.

S. flexneri 2a is the dominant serotype causing shigellosis in China. Our laboratory has finished a two-dimensional electrophoresis reference map and a proteomic database of S. flexneri 2a 2457T[2], but only a few of membrane proteins can be identified in that database. In order to develop new protective antigens against S. flexneri and to understand their immune mechanism, we applied immunoproteomic technologies in screening new antigens of S. flexneri 2a 2457T.

Preparation of antisera against 2457T

S. flexneri 2a 2457T was aerobically cultured in LB overnight at 37 °C. Rabbits were immunized six times with culture solution intravenously at intervals of 5 d. The doses were (5, 7.5, 10, 15, 20, 20)×108 CFU, respectively. Eight days after the last immunization, blood was collected from the tested animals and the sera were separated. Antibody titers 1:5 120 was measured by microaggalutination test and ELISA.

After two-dimensional electrophoresis, the gels were electroblotted onto Hybond™ECL™ nitrocellulose membrane (Amersham Pharmacia Biotech) using a semi-dry transfer unit (Hoefer™ TE 77, Amersham Pharmacia Biotech, Sweden). Before immunodetection, the membranes were stained for 10 min with 5 g/L Ponceau S in 10 mL/L acetic acid and the positions of some selected spots were marked by clean needles. Western blotting was performed as previously described[5]. Then antigen-antibody complexes were detected with peroxidase-labeled goat anti-rabbit IgGs and substrate.

The sample was prepared on the basis of the separation of membrane proteins by temperature-dependent phase partitioning using Triton X-114 detergent. Proteins anchored to the membrane or containing one or two transmembrane domains were efficiently partitioned to the detergent-rich phase. In order to solubilize the protein thoroughly, thiourea was used. In pH 4-7 gradient 2-DE map, 148 spots were cut and 111 spots were successfully identified by MALDI-TOF-MS presenting 82 protein entries. Twenty-five proteins were not observed/identified in our previous work[2]. The majority of these 25 proteins (data not shown) were hydrophobic and associated with the membrane. The relative abundance of membrane-associated proteins identified in this study was higher than that in our previous study[2].

On the basis of the established immunoproteomic map of soluble proteins of S. flexneri 2a 2457T (unpublished), we described a group of spots in a 2-DE map of immunogenic proteins from hydrophobic proteins in this study. Five hundred micrograms of protein sample was used to perform the 2-DE. One of the parallel gels was electroblotted onto nitrocellulose membrane and the other was stained with Coomassie brilliant blue G-250. We successfully identified 20 immunoreactive spots from Coomassie brilliant blue stained gels using sera from immunized rabbits, which represented 13 protein entries, 5 known antigens and 8 novel antigens. The 20 spots were marked on the 2-D gel and corresponding blotting membrane (Figure 1). Table 1 lists all the identified proteins. ESI-MS/MS was used to confirm the protein marked as spot 1. Figure 2 shows the result of ESI-MS/MS identification. 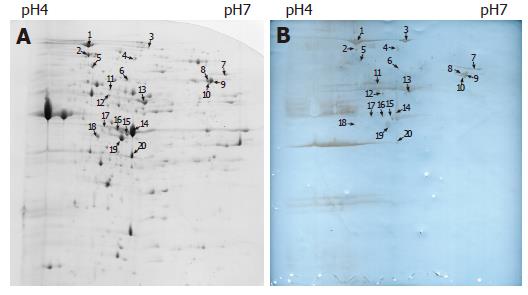 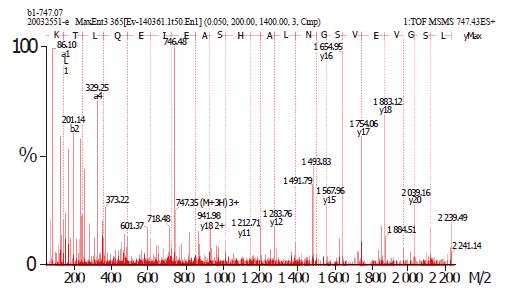 Our results are in accordance with other studies[7-11].The outer membrane protein 3a (II*; G; d) is a precursor of OmpA, a major and highly conserved outer membrane protein of Gram-negative bacteria. Due to its high copies per cell[12], multiple charged isoforms[13] and its strong immunogenecity, identification of OmpA was performed several times during the immunoproteomics analysis. All these proteins were observed in our other works (unpublished).

Besides the above confirmatory findings, the study detected several new immunoreactive proteins (AtpA, OppA, MglB, LpdA, ClpB, Gnd, Pgm, YaeT). AtpA, LpdA, Gnd, and Pgm are components of the energy metabolism system. ATP synthesis/hydrolysis occurs in the ATP synthase F1 sector which lies at the surface of cytoplasmic membrane. LpdA codes for an outer membrane lipoamide dehydrogenase that is highly immunogenic. It is an in vivo-induced antigen in Mycobacterium tuberculosis[14]. Since LpdA is a functional subunit of both pyruvate dehydrogenase (aceEF) and alpha-ketoglutarate dehydrogenase (sucAB), a lpdA mutant of H. influenzae can be significantly attenuated[15]. Gnd is an important component of pentose phosphate pathway. Phosphoglucomutase (pgm) is associated with virulence of Brucella abortus because the deltapgm strain is unable to assemble the O side chain in the complete LPS. Vaccination with the deltapgm strain induces effective protection[16]. The periplasmic oligopeptide binding protein OppA is part of the oligopeptide transport system. In addition to the function mentioned above, it also plays a role in mediating the adhesion or interactions of bacteria to different substrates, tissues or environments[17-19]. OppA and periplasmic galactose-binding protein MglB also display some chaperone-like functions, suggesting that they are probably involved in protein folding and protection against stress in periplasm[20]. ClpB is also a heat shock protein. The proteins described above have not been reported as antigens and may serve as candidate markers for bacterial infection though they are unlikely to be protective.

A hypothetical protein (YaeT) detected is of high homology to Oma90 of S. flexneri M90T (serotype 5)[21]. We also detected this protein in another study (unpublished), which is verified by ESI-MS/MS. Since it has an enhanced expression in a murine model and exhibits strong homology to genes encoding Haemophilus influenzae D15 and Pasteurella multocida Oma87, its role in Shigella infection and immunoreaction is worthy to be clarified.