AIM: To examine whether polymorphisms in SULT1A1 and GSTP1 genes contribute to colorectal cancer development and whether they are associated with clinicopathological variables are not well identified.

METHODS: We examined the genotypes of 125 colorectal cancer patients and 666 healthy controls in a Swedish population by using PCR-restriction fragment length polymorphism (RFLP).

CONCLUSION: Polymorphism in SULT1A1 may predispose to colorectal cancer and GSTP1 may be a biological indicator of prognosis in the patients.

Sulfotransferase 1A1 (SULT1A1), a major sulfotransferase enzyme in human beings, is an important component in the detoxification pathway of numerous xenobiotics. The enzyme also plays an important role in the metabolism and bioactivation of many dietary and environmental mutagens, including heterocyclic amines implicated in carcinogenesis of colorectal and other cancers[1]. SULT1A1 is polymorphic with the most common variant allele, SULT1A1*2, where a GA change occurs at nucleotide 638, resulting in an arg213his213 change. This allele codes for an allozyme with low enzyme activity and stability compared to the SULT1A1*1 variant. Therefore, SULT1A1 genotype may influence susceptibility to mutagens following exposure to heterocyclic amines and other environmental toxins[1]. However, regarding the results of the SULT1A1 polymorphism in relation to colorectal cancer risk was inconsistent[2-4].

Glutathione S-transferase P1 (GSTP1) plays a central role in the inactivation of toxic and carcinogenenic electrophiles[5]. The A to G polymorphism at nucleotide 313 in the GSTP1 gene results in an isoleucine to valine change at residue 105, which reduces the catalytic activity of the enzyme. The polymorphism of lower activity allele of GSTP1 was related to several types of cancers including bladder, testicular, and lung cancer, but not to colorectal cancer[5-10].

Normal colorectal mucosal samples and colorectal cancer tissue were obtained from 125 patients with primary colorectal adenocarcinomas diagnosed at the Department of Pathology, Vrinnevi Hospital, Norrköping, Sweden, during the period between 1990 and 2001. All patients were Caucasians. Patients’ gender, age, tumor site, Dukes’ stage and the grade of differentiation were obtained from their surgical and pathological records and reviewed by two authors. Normal colorectal mucosa was taken from the distant resection margin and the corresponding tumor tissue from the colorectal cancer. The patients with colon cancers in Dukes’ stage C/advanced tumor received chemotherapy (the influence on survival was less than 20%), and some patients with rectal cancers received adjuvant preoperative radiotherapy (the treatment has a marginal influence on survival). The patients were followed up until the end of October 2003, and 32 deaths due to the cancer had been registered.

Control population comprised 666 individuals from the same residential area as the patients. The individuals had neither gastrointestinal diseases nor history of tumors. DNA samples were extracted from the peripheral leukocytes.

DNA extraction Genomic DNA was isolated from frozen normal colorectal mucosa and tumor from colorectal cancer patients by a modified proteinase K digestion and phenol/chloroform extraction technique. In brief, the tissue (about 200 mg) was cut into small pieces and dissolved in a cell lysis buffer (40 μL of 20% SDS, 40 μL of 10 mg/mL proteinase K, 400 μL TEN buffer, 0.1 mol/L NaCl, 10 mmol/L Tris-HCl, 1 mmol/L EDTA, pH 8.4). Samples were kept in a shaking water bath at 55 °C overnight. The digestive step was repeated by the addition of half of the volume of the cell lysis solution (above), until the sample solution turned completely clear. DNA was extracted with phenol, phenol/chloroform and chloroform, precipitated with ice-cold ethanol, washed with 70% ethanol, and redissolved in double distilled water. The amount of purified DNA was measured by a DU 640 spectrophotometer (Beckman, Fullerton, USA), and the DNA concentration was calculated. Genomic DNA from the controls was extracted from peripheral leukocytes by means of the Wizard Genome Purification Kit (Promega Inc., Madison, USA) according to the manufacturer’s instructions.

Hae II (New England BioLabs) was applied to identify SULT1A1 genotypes[11] and Alw26I (New England Biolabs, Hertfordshire, UK) for GSTP1 genotypes[8]. The PCR products were digested with the restriction enzymes and separated in a 3.5% agarose gel or in a 4% of 3:1 NuSieve GTG agarose (BioWhittaker Molecular Applications, Rockland, ME, USA)/agarose, stained with ethidium bromide to visualize the bands.

Genotyping and grouping Genotyping and grouping of genotypes in the present study were based on their effect on carcinogenic metabolism and commonly used classifications in previous other studies. For SULT1A1, three genotypes of *1/*1, *1/*2, and *2/*2 were classified[2,11-13]. To analyze the relationship of SULT1A1 genotype with clinicopathological factors, we combined SULT1A1*1/* with *1/*2 as one group vs SULT1A1*2/*2 group. The polymorphisms of GSTP1 were confirmed to be A/A, A/G, and G/G. GSTP1 A type was referred to A/A, and G type was referred to both A/G and G/G[6,14,15].

The χ2 method was used to test the frequencies of genotypes/allele in colorectal cancer patients with the control population and various clinicopathological variables. McNemar’s method was used for testing the differences of the genotype/allele frequency in normal colorectal mucosa and tumor tissue. The odds ratio (OR), an estimate of the relative risk, with 95% confidence intervals (CI) was computed to assess the relationship of the genotypes/allele to the risk of colorectal cancer. Cox’s Proportional Hazard Model was used to test the relationship between the polymorphisms and the survival of patients. Survival curves were computed according to the Kaplan-Meier method. All P values cited were two-sided and P values <0.05 were judged as statistically significant.

The patients with GSTP1 G-type genotype had a worse prognosis than those with GSTP1 A (A/A) type genotype (P = 0.02, Figure 1). Even in multivariate analysis, the genotype was still related to survival, independent of gender, age, tumor location, Dukes’ stage, growth pattern, and differentiation (P = 0.03, Table 2). Besides, there was no relationship of genotype/allele frequency with any of the clinicopathological variables studied in the patients (P>0.05). 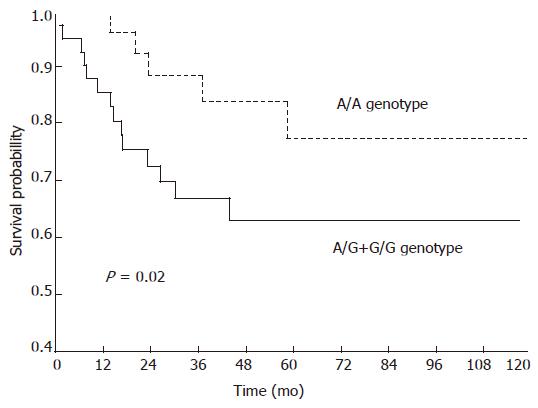 Figure 1 Colorectal cancer patients with G-type genotype (A/G+G/G) of the GSTP1 gene had a worse prognosis than those with A/A genotype (A/A) (P = 0. 02).

In the present study, we demonstrated that the patients with colorectal cancer, comparing with the controls, had significantly higher frequencies of SULT1A1*2/*2 genotype (36% vs 15%) and *2 allele (48% vs 37%), indicating that SULT1A1*2/*2 allele was related to colorectal cancer risk. Our results supported previous findings in colorectal, esophagus, breast and lung cancer studies, where SULT1A1 *2/*2 genotype was associated with an increased risk for the tumor development[2,16-18]. It has been observed that a G to A transition at nucleotide 638 in SULT1A1 gene causes an Arg213 to His substitution associated with a low SULT activity. Thus, these results suggest that low activity of SULT1A1*2 allozyme lacks a protection against dietary and/or environmental chemicals involved in the carcinogenesis of colorectal cancer.

It has been demonstrated that individuals with GSTP1 G/G alleles had a lower catalytic activity compared with individuals with GSTP1 A/A. An intermediate activity was reported for heterozygotes[19,20]. In the present study, the frequencies of genotype and allele in the control (50% for A/A, 40% for A/G, 10% for G/G, and 70% for A allele) and in the patients (47%, 41%, 12%, and 68%, respectively) were similar to the frequencies raised by other studies in Caucasian controls (40-52%, 39-48%, 7-11%, and 67%, respectively) and colorectal cancer patients (37-49%, 42-55%, 8-12%, and 70%, respectively)[7,8,10,14,21]. We failed to find any evidence supporting an association between the allelic variants of GSTP1 and susceptibility to colorectal cancer or certain clinicopathological factors including gender, age, tumor location, Dukes’ stage and differentiation, which is supportive to previous findings[6,7,9,21].

Interestingly, we found that patients with GSTP1 G-type had a worse prognosis than the patients with GSTP1 A-type, even after adjustment for gender, age, tumor location, Dukes’ stage, and differentiation. A study in breast cancer found that a significantly higher proportion of breast cancer patients with a GSTP1 G-type had more frequency of p53 mutations and loss of heterozygosity at the TPp53 gene locus, compared with GSTP1 A-genotype[22]. It has been widely accepted that altered p53 predicts a poor prognosis in breast cancer patients, although there is not a direct evidence of GSTP1 in relation to survival in their study. It seems that GSTP1, through the AG polymorphism, may reduce its effect on the inactivation of toxic and carcinogenic electrophiles[5]. In contrast, Stoehlmacher et al[21] demonstrated that the GSTP1 AG polymorphism was associated in a dose-dependent fashion with increased survival of patients with advanced colorectal cancers receiving 5-FU/oxaliplatin chemotherapy. They suggest that the effect of certain chemotherapeutic drugs might be altered when enzymes that could enhance the elimination of these drugs show a reduced activity. The opposite results related to survival in colorectal cancer patients may be due to different characteristics of patients included in the two studies. We included all Dukes’ stages with a proper stratification (A = 12, B = 46, C = 34, and D = 17); among them, the cases with colon cancers in Dukes’ stage C or advanced tumors received chemotherapy, and some patients with rectal cancer received adjuvant preoperative radiotherapy. All patients in their study had a metastasis and received 5-FU/oxaliplatin combination chemotherapy. Furthermore, we had a longer follow-up period than theirs (median month: 33 vs 10.9). Comparing with their data, we have more Caucasians (100% vs 72%) and older patients (median: 73 vs 60 years).

In conclusion, our results suggest that SULT1A1 may predispose to colorectal cancer, and GSTP1 may be used as a prognostic factor to predict the patients’ survival.