AIM: To compare the prevalence of Helicobacter pylori (H pylori) IgG and IgA antibodies between adult subjects, with defined gastric diseases, nondefined gastric disorders and those representing the population.

CONCLUSION: An IgA antibody response during H pylori infection is significantly more common in CA and GU patients as compared with CG patients.

Helicobacter pylori (H pylori), the causative agent of chronic gastritis[1], is also the most important risk factor for peptic ulcer disease and distal gastric cancer[4,5]. The presence of H pylori antibodies signify this chronic infection and their prevalence increases with age in all populations, mainly due to the birth of cohort phenomenon[6,7]. The optimal serological tests for IgG antibodies to H pylori show a sensitivity and a specificity of over 95%[8-10]. Antibodies of the IgA class are usually detected in combination with elevated IgG antibodies in approximately two-thirds of infected subjects[8,11,12]. They are diagnostically useful in the 2-7% of H pylori patients who do not have elevated IgG levels[7,8,12-15]. IgA antibodies have been shown to be a sensitive indicator of an increased risk for gastric cancer[14]. In this context, it may be important that subjects with CagA antibodies have more often H pylori antibodies of the IgA class as compared with those who are CagA antibody-negative[15], since CagA-positive infections have been associated with an increased risk of both peptic ulcer disease and gastric cancer[16,17].

In the present study, we analyzed the prevalences of H pylori antibodies determined in our laboratory from 1986 to 2000 in clinical samples taken from patients with endoscopically verified or undefined gastric disorders and in samples collected from the Finnish population.

Serum samples for this study were obtained from 1986 to 2000 from the following patient groups: 3 252 patients with defined gastric diseases (DGD), including 482 patients with an endoscopically confirmed gastric ulcer (GU) (mean age 60.79 years, SD±12.59 years), 882 patients with an endoscopically confirmed duodenal ulcer (DU) (mean age 53.80 years, SD±13.64 years), 1 525 patients with a histologically verified chronic gastritis (CG) (mean age 50.58 years, SD±15.95 years) and 363 subjects with subsequent gastric cancer (CA) (mean age at the time of the serum sampling 57.23 years, SD±10.91 years). Sera from GU, DU, and CG patients were collected on the day of the endoscopy, those from CA patients between 2 wk to 24 years before the diagnosis of cancer was made (reported in part earlier[5,14]). In the GU, DU, and CG groups, patients who had prior successful eradication therapy were excluded from the study. In addition, serum samples were obtained from 4 854 subjects participating in a population study in Vammala, Finland (POPUL) (mean age 41.73 years, SD±20.60 years), reported in part earlier[7] and from 19 145 patients whose sera were sent by general practitioners, Municipal Health Centers or Hospitals to our diagnostic laboratory for H pylori antibody tests without any information on possible gastric disorders (NoDg) (mean age 51.47 years, SD±16.97 years).

The study was approved by the Ethics Committee for Epidemiology and Public Health of the Helsinki and Uusimaa Hospital district.

H pylori IgG and IgA antibody titers were determined by in-house enzyme immunoassays[8,10].The antigen used was an acid glycine extract from H pylori strain NCTC 11637. During the study period, the sensitivity and specificity of the IgG test were 95-99% and 93-97%, respectively, and those of the IgA test were 64-67% and 92-98%, respectively, as determined in patients in whom the presence of H pylori infection had been verified by culture and histology of gastric biopsies[8,10].

The trend in changes in the prevalences of IgG and IgA antibodies by age was studied using the linear trend test. The comparisons of prevalences of IgA and IgG antibodies between the groups were analyzed using the logistic regression model adjusting for age based on 1-year age cohorts. For an overview, the prevalences were determined for 20-year age-adjusted cohorts (15-34, 35-54, 55-74, and 75-94 years), each including at least 50 subjects. The association of IgA and IgG responses with the risk of serious complications (CA, GU, and DU) was analyzed using a logistic regression model by comparing the number of subjects in each antibody response and complication category to that in CG patients, who are regarded to present the basic disease caused by H pylori. Statistical analyses were carried out using the SPSS 12.0 software package (SPSS Inc., Chicago, IL, USA). P<0.05 was considered statistically significant. 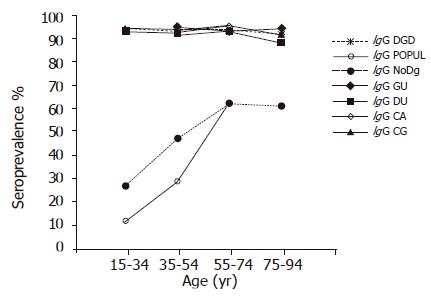 Figure 1 Prevalence of H pylori IgG antibodies by 20-year age cohorts in the Finnish population and patients with different gastric disorders. (Only cohorts including at least 50 subjects are shown).

Within the DGD group, the prevalences did not differ between the GU, DU, CG, and CA groups, nor did they show any significant variation by age (trend test). 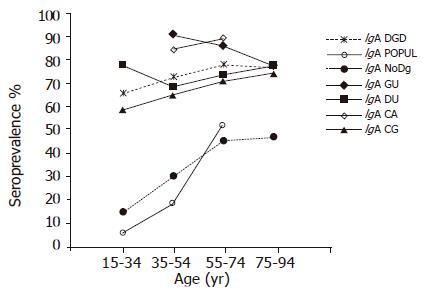 Figure 2 Prevalence of H pylori IgA antibodies by 20-year age cohorts in the Finnish population and patients with different gastric disorders. (Only cohorts including at least 50 subjects are shown.)

Association of IgG and IgA responses with the risk of CA, GU, and DU in comparison with CG

In the present study, we analyzed, according to age cohorts, a large body of serological data collected during a 15-year period. DGD subjects with gastric disorders known to be associated with H pylori infection showed a high and rather a constant prevalence of H pylori IgG antibodies in all the 20-year age cohorts. Based on the prevalence of IgA antibodies, the DGD group could be divided into two categories: in GU-CA-category, the age-adjusted IgA prevalences ranged from 78% to 91%; whereas in DU-CG-category, the age-adjusted IgA prevalences remained significantly lower. With the exception of CG patients, the IgA antibody rates also remained rather constant throughout the age range. In contrast, the infected subjects in the POPUL and NoDg groups showed significantly lower IgG and IgA rates than those in the DGD group and that increased significantly by age. The CG patients formed a special intermediate group with overall IgG and IgA antibody prevalences at the same level as those of the DU patients, but with a significantly increasing trend by age in the prevalence of IgA antibodies.

The importance of the IgA response increases when considered in connection with our earlier findings showing the association of H pylori antibodies of the IgA class with a CagA-positive infection[15], as well as with other reports showing an increased risk of peptic ulcer disease and gastric cancer in CagA-positive infection[16,17]. The present results imply that an IgA response during H pylori infection might be regarded as an indicator of an increased risk not only for gastric cancer[14] but also for gastric ulcer disease. In these comparisons, that we carried out using the data from patients with chronic gastritis as baseline values, we found that the higher IgA response rate seen in DU patients did not reach significance.

By using the data obtained in prospective gastric cancer studies, we wanted to avoid the bias caused by severe atrophic gastritis, regarded as a precancerous process[18]. Severe atrophic gastritis may progress to a disease stage when Helicobacters first gradually decrease in number, then disappear and finally also Helicobacter antibodies, the longest lasting indicators of the infection, fall to a normal level[19]. In particular, in elderly subjects with non-cardia cancer, there may be several individuals who at the time of diagnosis may have lost all direct indicators of their burnt out Helicobacter infection.

Our large materials and the high sensitivity and specificity of our antibody tests also gave an opportunity to compare the prevalence of H pylori antibodies between the POPUL and NoDg groups. It is tempting to speculate that the higher H pylori prevalence in the two youngest cohorts (by 15% and 18% units in antibodies of IgG class in the order of increasing age) in NoDg patients would preferentially reflect the strength of gastric symptoms driving patients to clinical consultations.

In conclusion, irrespective of age, practically all DGD subjects have H pylori IgG antibody. The prevalence of IgA antibodies highest in CA and GU patients, second highest in DU and CG patients, and lowest in the NoDg patients and POPUL subjects. An IgA response is associated with serious sequelae of H pylori infection.