In this study, we generated MSX2-overexpressing pancreatic cancer cell line Px14, and this cell line revealed resistance to the gemcitabine treatment. When cells were treated with gemcitabine, the caspase-3 activation was significantly upregulated in empty vector-transfected control cells, but not in Px14 cells compared to basal control cells. Taken together, MSX2 might act as a negative regulator of apoptosis in this cell line. This new upstream regulator of apoptotic signaling pathway may provide a novel therapeutic target of chemotherapy-resistant pancreatic cancer.

Gemcitabine (Gemzar; Eli Lilly Co., Indianapolis, IN, USA) was dissolved in phosphate buffered saline (PBS) at various concentrations of 0.1, 1, 10, 100 μg/mL and 1 mg/mL as stock solutions. In cell culture, vehicle and these stock solutions were used in 1:100 dilutions.

Apoptosis was determined by staining with Hoechst. Cells were plated at 1×104 on culture slide (Becton Dickinson, Franklin Lakes, NJ, USA) and allowed to adhere to the slide overnight. Gemcitabine (1 μg/mL) was added and incubated for an additional 24 h. The cells were fixed with 40 g/L paraformaldehyde for 20 min, followed by Hoechst 33342 (Calbiochem-Novabiochem, La Jolla, CA, USA) staining in these cells for 30 min. Then the cells were analyzed under a fluorescence microscope (Leica, Cambridge, UK). Between the incubations, the specimens were washed thrice with PBS. Chromatin condensation, nuclear shrinkage, and nucleosomal fragmentation were considered to be morphological markers of apoptosis.

The unpaired t-test and one-way ANOVA were used for statistical comparison. Calculations were made with the help of Microsoft Excel computer software (Microsoft, Redmond, WA, USA). P<0.05 was considered statistically significant. 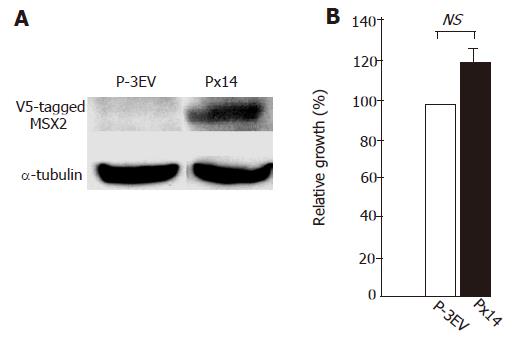 Figure 1 A: Western blotting analysis of V5-tagged MSX2 expression in Px14 cells; B: detection of cell proliferation of P-3EV and Px14 by BrdU incorporation assay. No significant difference was observed in these two cell lines, but slight increase of proliferation ratio was observed in Px14 cells (unpaired t-test, n = 3).
Decrease of gemcitabine sensitivity in Panc-1 cells by MSX2 overexpression 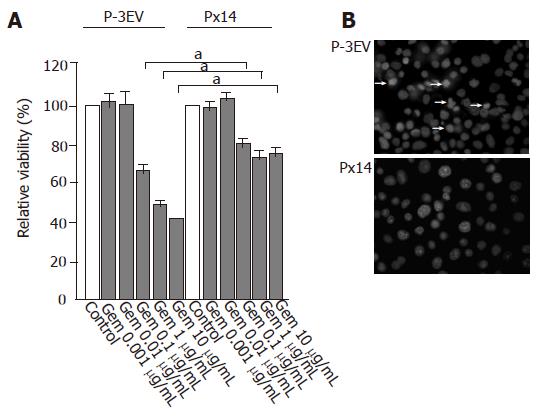 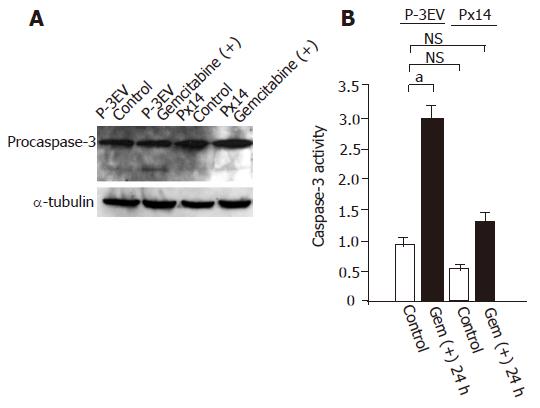 Even in pancreatic cancer cells, apoptotic signal does exist, but the signal is considered to be overwhelmed by inhibitor of apoptosis[10]. In our experiment, gemcitabine treatment induced apoptotic changes in P-3EV cells, whereas this effect was attenuated by MSX2 overexpression. Studies have shown that the ability of evasion from apoptosis is one of the critical steps for tumor progression. For example, interference of X-linked inhibitor of apoptosis (XIAP) expression in MDA-MB-231 mammary cancer cell line increases sensitivity to several chemotherapeutic agents[11]. The expression level of survivin in pancreatic cancer tissue is significantly associated with the reduction of the apoptotic index of tumor cells[12] and is also reported to be correlated with the prognosis of patients[13], indicating that anti-apoptotic effectors directly affect clinical outcomes.