METHODS: Two hundred and sixty patients were recruited retrospectively for this study and divided into groups with defined time intervals after OLT. The cross-sectional changes of portal and arterial velocities, resistance index, spleen and liver size between the defined time intervals were studied. The complications detected by ultrasound were compared to gold standard methods.

CONCLUSION: The arterial and portal velocities show adaptation processes continuing over the course of many years after OLT and are reported for the first time. The vascular complications detected by ultrasound occur mostly up to 100 d after OLT.

Since the 1980s, OLT has become a standard therapy for patients with end-stage liver disease[1] and till date, the outcome of this therapy depends on the early diagnosis and appropriate treatment of complications[2]. Vascular complications are a frequent cause of early graft failure[3]. Graft damage can be either directly caused by hypoxemia or indirectly by biliary ischemia during graft handling which equally leads to chronic biliary damage[4,5]. Time-dependent changes of splanchnic hemodynamics in liver graft recipients have been reported[6]. Based on these data, it is likely that an understanding and interpretation of splanchnic hemodynamics may lead to the prevention and diagnosis of vascular complications[6].

Apart from physical examination and biochemical work-up, routine and diagnostic imaging procedures are recommended to detect post-OLT vascular complications[7-9]. B-mode and especially color Doppler sonography have played a central role in the monitoring of post-transplantation patients. The use of ultrasound allows for the early diagnosis of hepatic arterial as well as biliary complications[3,9,10] and contributes to a better understanding of splanchnic hemodynamic changes[6]. 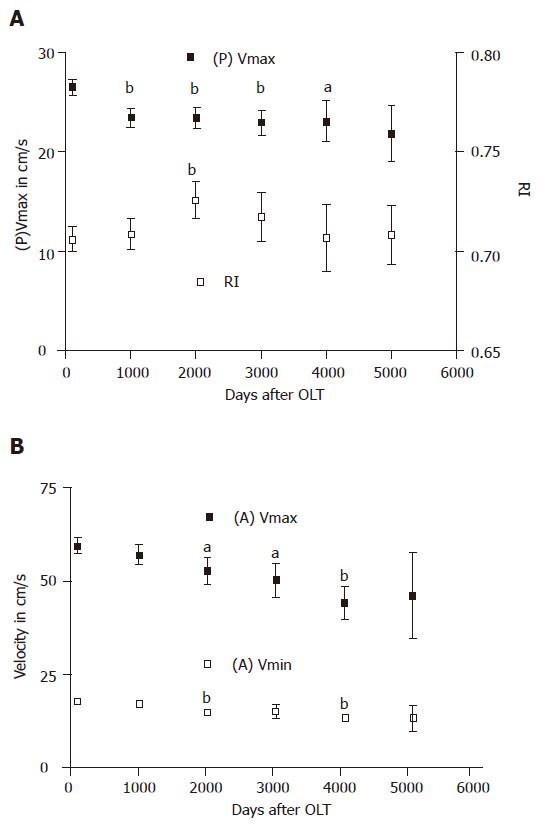 Figure 1 Changes in portal flow velocity and resistance index (A) and arterial velocities (A)Vmax and (A)Vmin after OLT (B) during the course of time after liver transplantation in 260 patients. (aP<0.05; bP<0.01 vs others).

Systematic B-mode examination of all abdominal organs including the retroperitoneum was performed following the recommendations of the German Association of Ultrasound in Medicine (DEGUM). Liver size was measured by the diameter of the right lobe in the mid clavicular line (MCL). The spleen length was measured from upper to lower pole in an oblique intercostal array position. The normal liver size was defined as 13±0.5 cm[11]. The normal spleen size was defined as 11±0.5 cm[11]. In addition, the portal vein and the bile duct anastomosis were examined in the proximal and distal portion.

The maximum velocity of the portal vein [(P)Vmax], the maximum systolic velocity [(A)Vmax], the maximum end diastolic velocity [(A)Vmin] and the resistance index of the hepatic artery (RI) were measured before and after the anastomosis in each case after an overnight fasting. Settings such as gain, filter, and pulse-repetition frequencies were adjusted as needed for optimal signal detection to prevent artifacts. Segmental arterial stenosis was considered to be present when circumscript aliasing was visualized by color Doppler sonography using the maximal pulse repetition frequency (PRF) as well as the presence of a Vmax exceeding 170 cm/s. Alternatively, in case of the absence of a segmental stenosis, the detection of a tardus-parvus duplex spectrum with a cut off RI below 0.5 in addition to a Vmax>170 cm/s was required for the definition of a stenosis. Stenosis of the portal vein required a two-fold increase of flow velocity in the stenosis. Dilated intrahepatic and extrahepatic bile ducts were defined as exceeding 3 and 10 mm in diameter (DEGUM guidelines), respectively.

The complications detected by ultrasound were confirmed by following the gold standard methods. In all patients with suspected stenosis or thrombosis of the hepatic artery by ultrasound examination, a CT-angiography was performed to confirm the diagnosis. Most of the biliary complications such as bile duct dilatation, thickening, stricture, and calculi in the bile duct system were confirmed by endoscopic retrograde cholangiopancreaticography (ERCP) in patients with chocholedochostomy[12] and by percutaneous transhepatic cholangiography (PTC) in patients with status after hepaticojejunostomy. The occurrence of intrahepatic abscesses was confirmed by biopsy. Liver biopsies after OLT were available from 94 patients (n = 45 acute rejections, n = 2 chronic rejections, n = 2 ischemia, n = 21 viral re-infection, n = 21 fibrosis, n = 7 cirrhosis, n = 33 cholangitis).

Statistical evaluation was performed using the SPSS 11.5 software package for Windows™. Mean values and standard errors of the means (mean±SE) as well as frequencies were calculated. Correlations were done using Spearman’s (S) rank correlation coefficient. We also analyzed the changes of the velocity values as well as organ sizes in the course of time. Due to different time points of ultrasound examinations after OLT, we divided the patients in groups with defined time intervals after OLT. The time points were days 100 (1), 1 000 (2), 2 000 (3), 3 000 (4), 4 000 (5) and 5 000 (6) after OLT. The number of patients at the defined time intervals was as follows: n = 20 (1), n = 120 (2), n = 81 (3), n = 48 (4), n = 25 (5), n = 11 (6). At these time points, the data of patients before the defined time point (days after transplantation) were compared with the data of patients after this time point. Mean values of the parameters were calculated and compared for significance using the t-test. Therefore, our data reflected only the changes of the studied parameters at these time points. The changes of the parameters in the group of patients before the defined time points were graphically demonstrated. The graphs were assembled using the Prism 3.0 software package.

Correlations as well as the mean values were calculated with and without extremes. The extremes were defined as stenosis or thrombosis of the portal vein and/or the hepatic artery (n = 8).

Vascular complications over a 13.7-year observation period were detected in one case (0.4%) of thrombosis and five cases (1.9%) of stenosis of the hepatic artery and in seven cases (2.7%) of stenosis of the portal vein by ultrasound (Table 3). All cases were confirmed by CT angiography.

Dynamics of color Doppler parameters in patients after liver transplantation

All vascular complications detected by duplex measure-ments in this study occurred within the first 100 d after liver transplantation (Table 5). Due to this information as well as the fact that complications such as rejection appear mostly during the early phase after OLT, drastic long-term hemodynamic changes in these patients are not expected. All vascular complications were initially diagnosed by ultrasound examination. Interestingly, a satisfactory blood flow was observed intraoperatively, but these patients developed stenosis after OLT. Routine and protocol ultrasound examinations during this interval are therefore recommended[13,14]. The flow characteristics of patients early after OLT have been reported in prospective studies[6,15]. We therefore focused our study on the long-term changes of these parameters.

The long-term hemodynamic changes in these patients seem to be influenced by factors in the graft itself or alteration of the vascular track. The prospective study of Bolognesi et al[6] is the largest follow-up study investigating the hemodynamic changes in patients after OLT. Compared to this study, our study showed a more heterogeneous spectrum of the underlying liver diseases. Our findings showed that the mean liver size remained within the normal range, independent of the complications, even many years after OLT. Based on the results of liver biopsies after OLT, at least 20% of the patients included in this study had parenchymal changes such as cirrhosis or fibrosis which consequently leads to a smaller liver size. Interestingly, the mean values of liver size still remained stable in the course of studied time points. The mean splenic size was smaller than that of previously reported[6] which may be explained by the heterogeneity of liver diseases with a considerable amount of transplantations without portal hypertension.

Depending on the evaluation time after OLT, an initial increase in portal blood flow in patients with cirrhosis has been reported, which was normalized within 2 years[6]. We observed a decrease of portal blood flow from 100 d to 8.2 years after OLT. This stable decrease may also be influenced by the low prevalence of portal stenosis and thrombosis in our patients. We also detected a decrease of arterial velocities over a long period of time after OLT. This could be caused by the normalization of hyperdynamic circulatory syndromes of patients with cirrhosis at the time of OLT. While the role of arterial RI in patients after kidney transplantation has been extensively studied, the RI changes in liver graft recipients are still unclear. It was reported that a high arterial RI after kidney transplantation is associated with poor subsequent allograft performance and death[16]. In liver graft recipients, an early increase in hepatic arterial resistance has been reported[6,17], which is related to older donor age and prolonged period of ischemia. Higher RI values were found in older patients in our study. RI increase is also attributed to the elevation of portal blood flow early after OLT[6]. In our study, RI did not correlate with portal flow.

Our data have confirmed the reported rate of ultrasound detected complications in patients after liver transplantation. However, the sensitivity of ultrasound for detection of biliary complications is better than that of previously reported[12]. Arterial thrombosis after transplantation has an estimated incidence of 12%[8]. In our patients, thrombosis of the hepatic artery was detected by ultrasound in 0.4% of cases. Since the majority of arterial thromboses occur during the early post-transplantation period[3] and most of our examinations were performed 100 or more days after OLT, the low prevalence of arterial thrombosis in this study may be related to the time point of investigation. The detection rate of hepatic artery stenosis as well as portal vein thrombosis in our study was comparable to the reported incidence[8,18,7]. The detection rate of biliary tract complications in this study (22.3%) is higher than the reported incidence approaching 18%[19]. Regarding the cases, which were confirmed by ERCP or PTC in our study, ultrasound has a sensitivity of 88%[12].

This study provides an insight into time point of vascular complications as well as hemodynamic and parenchymal adaptive processes present in liver graft recipients. The cross sectional characteristic of our study did not allow a continuous assessment of hemodynamic changes in the course of time, but it enables the analysis of a very long observation period. These data can serve as an orientation for the examining physicians to have a better understanding and interpretation of duplex changes in these patients.