AIM: To detect the DNA binding activity of nuclear factor-kappaB (NF-кB) in rat hepatocyte and to investigate the effects of NF-кB on rat hepatocyte regeneration and apoptosis after 70% portal branch ligation.

METHODS: Sixty Wistar rats were randomly divided into control group and portal branch ligation group. The animals were killed 12 h, 1, 2, 3, 7, and 14 d after surgery to determine the contents of plasma ALT. Hepatocytes were isolated and nuclear protein was extracted. DNA binding activity of NF-κB was measured by EMSA. Hepatocyte regeneration and apoptosis were observed under microscope by TUNEL staining. The ultrastructural changes of liver were observed under electron microscope.

RESULTS: Seventy percent portal branch ligation produced atrophy of the ligated lobes and the perfused lobes underwent compensatory regeneration, the total liver weight and plasma ALT levels were maintained at the level of sham-operated animals throughout the experiment. After 2 d of portal branch ligation, DNA binding activity of NF-кB in hepatocyte increased and reached its peak, the number of apoptotic hepatocyte in the ligated lobes and the number of mitotic hepatocyte in the perfused lobes also reached their peak. Typical apoptotic changes and evident fibrotic changes in the ligated lobes were observed under electron microscope.

CONCLUSION: After 70% portal branch ligation, DNA binding activity of NF-кB in hepatocyte is significantly increased and NF-кB plays an important role in hepatocyte regeneration and apoptosis.

Portal branch ligation (PBL) or embolization is widely used in the treatment of liver carcinoma, especially in the treatment of patients who have already missed the surgical opportunity[1-3]. PBL or embolization could produce atrophy of the ligated lobes and the perfused lobes undergo compensatory regeneration, while the liver structure and function maintained normal. But the mechanism is still unclear.

Sixty Wistar rats, weighing 200-240 g, were obtained from the Animal Center of the Third Military University and used in all experiments. All animals were kept in a temperature- and humidity-controlled environment in a 12-h light/dark cycle and allowed free access to water and standard food-pellet diet.

All surgical procedures were carried out under sodium pentobarbital (40 mg/kg intraperitoneally) anesthesia at room air between 9:00 and 12:00 a.m. with a clean but not sterile technique. The 70% PBL model used was based on the Bilodeau method[7]. In 70% PBL, a median laparotomy was performed, and the branch of the portal vein feeding the anterior and lateral lobes was carefully dissected under an operating microscope and completely ligated with a 7-0 suture. Care was taken not to injure the hepatic artery and the bile duct and to avoid hemorrhage. In sham-operated rats, a laparotomy followed by dissection of the relevant ligaments without ligature was performed. The animals had free access to water and food after surgery. The animals were killed 12 h, 1, 2, 3, 7, and 14 d after surgery.

The rat liver color and quality were observed. Both ligated and nonligated lobes were weighed separately for measurement of their absolute and relative weights (the ratio of liver weight/body weight), and their percent in the whole liver was calculated.

Serum ALT level was measured with the biochemical multi-analyzer in Biochemistry Department of our hospital.

Liver sections were derived from formaldehyde-fixed tissues embedded in paraffin and stained with hematoxylin–phloxin–saffron. Mitotic activity in stained sections was determined. Mitotic hepatocytes were sought in 100 consecutive high-power fields (×400), and mitotic index was expressed as per 1 000 hepatic nuclei. Prophases before dissolution of nuclear membrane and late telophases were excluded.

Tissue sections of rat liver were dewaxed in toluene and alcohol. After rehydration with phosphate-buffered saline, they were incubated with proteinase K (25 μg/mL) for 15 min at room temperature and then with terminal deoxyribonucleotidyl transferase (1 U/mL) and digoxigenin-tagged dUTP (10 μmol/L) at 37 °C for 1 h in 0.2 mol/L sodium cacodylate, 30 mmol/L Tris (pH 7.2), 1 mmol/L CoCl2, and 0.25 mg/mL bovine serum albumin. The sections were exposed to anti-digoxigenin antibodies labeled with alkaline phosphatase for 30 min at room temperature in 50 mmol/L Tris (pH 7.4) and 150 mmol/L NaCl. The binding of the antibody was revealed with 4-nitroblue tetrazolium chloride and 5-bromo-4-chloro-3-indolyl-phosphate reagents. Slides were counterstained with 1% eosin.

The rat liver was cut into sections as large as 1 mm×1 mm×1 mm, which were embedded in Epon618 resin and stained with uranyl acetate and lead citrate. H-2000 transmission electron microscope was used to study the ultrastructure.

Results were expressed as mean±SD. The statistical difference between the groups was tested using the one-way analysis of variance (ANOVA). P<0.05 was considered statistically significant.

RESULTS
Activation of NF-κB in hepatocyte after 70% PBL 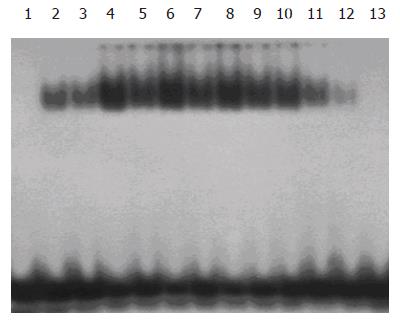 The liver lobes deprived of portal flow were darkened, rapid and progressive atrophy occurred, with their proportion being reduced gradually in the whole liver. At the same time, the nonligated lobes were progressively enlarged, the total liver weight was maintained at the level of sham-PBL controls at each time interval (Figure 2A). 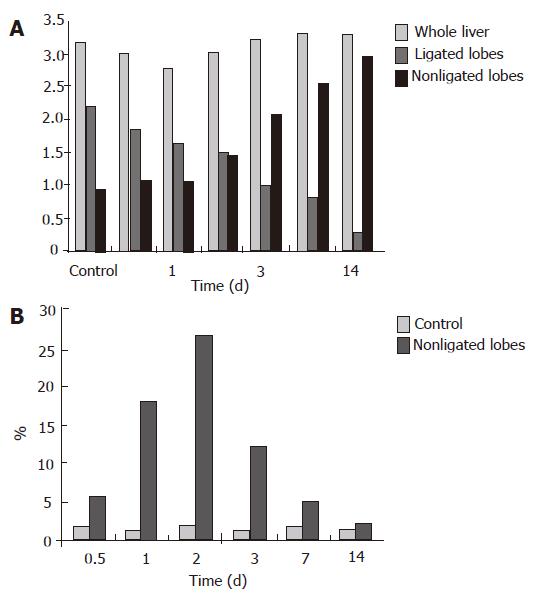 Figure 2 Changes in weight of rat liver (A), Changes of mitogenetic index of rat hepatocyte (B) after 70% PBL.
Changes in serum ALT level

There were no changes of serum ALT level in control group. After 70% PBL, the serum ALT level only increased slightly 1 d after surgery and then returned to normal (Table 1).

No apparent changes were found at light microscopic examination in the control liver. One day after 70% PBL, mild necrosis was found in the ligated lobes, mainly around the central vein. The cytoplasm was homogenous, and the nuclear pyknosis inside the necrosis and neutrophils was seen in some lesions. After 3 d, the necrosis was partly resorbed, and many monocytes were seen inside them. The lobules were small, with portal areas lying near each other. One to two weeks after ligation, the necrosis was completely disappeared, and the lobules became small. Fibrosis appeared around larger portal and hepatic veins, and bile ducts were collapsed with low epithelium.

Remarkable hepatocyte regeneration was observed in the nonligated lobes 12 h after 70% PBL and reached its peak 2 d later, and was still high after 7 d. The liver structure was almost normal (Figure 2B). 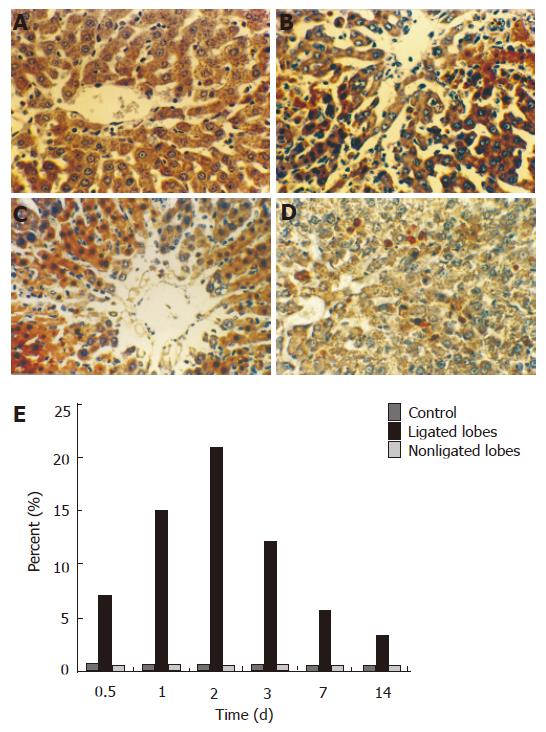 The liver ultrastructure was normal in control animals and was almost normal in the ligated lobes early after 70% PBL, and only wild necrosis was found in some local areas. One day after 70% PBL, many apoptotic hepatocytes were found in the ligated lobes. Histological evidence for apoptosis included disappearance of the nuclear membrane, condensation, and margin of karyoplasms or chromatin, pieces of nuclei. There were no morphological changes in the mitochondriae and other intracellular structures (Figure 4). A number of apoptotic hepatocytes reached its peak 2 d later. Collagen was deposited in the Disse space and hepatic sinus became narrow 7 d after 70% PBL. Evident fibrotic changes were found in the ligated lobes 14 d after 70% PBL. A lot of collagens were deposited in the Disse space and portal areas, between hepatocytes and in hepatocytes. 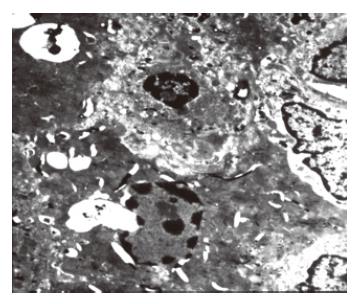 PBL or embolization is widely used in the treatment of liver carcinoma, especially in the treatment of patients who have missed the opportunity of surgery[1-3]. It was verified in our experiment that PBL could produce atrophy of the ligated lobes, whereas the perfused lobes underwent compensatory regeneration, the liver structure and function maintained normal. Therefore, it is safe and practicable to ligate 70% portal vein branch in normal rat liver.

The 70% PBL could produce atrophy of the ligated lobes through hepatocyte apoptosis; whereas the perfused lobes undergo compensatory regeneration through hepatocyte mitosis. The total liver weight and function maintained normal. The mechanism of rat liver is still unclear. We observed the changes of DNA binding activity of NF-κB in liver through EMSA. After 70% PBL, DNA binding activity of NF-κB significantly increased both in ligated lobes and nonligated lobes, which was positively correlated with hepatocyte regeneration and apoptosis. Therefore, we could conclude that NF-κB plays an important role in hepatocyte regeneration and apoptosis after 70% PBL.

NF-κB, as a universal nuclear transcriptional factor, plays an important role in the regulation of genes relative to cell regeneration and apoptosis[9,10]. In most cells, NF-κB heterodimers are present in the cytoplasm forming an active complex by interacting with the IкB family of proteins. In response to a variety of activators, IкB-α, the prototypic member of this family of inhibitors, is phosphorylated at series 32 and 36, rendering the factor susceptible to proteolysis via the ubiquitin–proteasome pathway. This event unmasks a nuclear localization sequence of the transactivating heterodimers, allowing NF-κB translocation to nuclei. Therefore, the complex binds to кB consensus motifs in DNA, upregulating the transcription of many genes[11-14].

We observed that the changes of DNA binding activity of NF-κB in the ligated lobes were more obvious than those in the perfused lobes. One reason is that compensatory response to the excessive hepatocyte apoptosis could maintain the relative weight and function of the liver. The other reason is that NF-κB plays an important role in accelerating hepatocyte apoptosis. Kuhnel et al[28] reported that NF-κB mediates hepatocyte apoptosis through transcriptional activation of Fas (CD95) in adenoviral hepatitis. Recently the induction of NF-κB through the double-stranded RNA-dependent protein kinase has been suggested as a principal mechanism of virus-mediated apoptotic cell death[29].

In conclusion, NF-κB plays a completely different role in the ligated lobes and nonligated lobes through different stimulating factors and different signal transduction pathways. This may have important significance in maintaining liver structure and function after 70% PBL.