Unicentric Castleman’s disease of the pancreas is extremely rare, with only six cases described in the worldwide literature. An asymptomatic case of unicentric, hyaline, vascular-type Castleman’s disease (UCD) localized to the tail of the pancreas with central calcification imitating a primary neoplasm of the pancreas is presented. This is the first description of endosonographic and endoscopic retrograde pancreatographic findings of pancreatic UCD. Additionally, computed tomography, histological and serologic findings are reported.

Unicentric Castleman’s disease (UCD), also called giant lymph node hyperplasia, follicular lymphoreticuloma or angiofollicular mediastinal lymph node hyperplasia, is a rare lymphoproliferative disorder of unknown aetiology. UCD was first described and defined by Benjamin Castleman in 1956 in tumors of the thymus with asymptomatic mediastinal lymph node hyperplasia, which could be separated histologically from thymomas and other neoplastic lymph node disorders[1]. Flendrig and Schillings distinguished two basic pathologic types and one mixed variant[2], while Keller et al[3] designated hyaline-vascular, plasma cell, and hyaline-vascular plasma cell type. UCD typically presents as indolent benign disease in young adults with a median age of approximately 35 years and is equally distributed between males and females[2,3]. A subset of patients with plasma cell variant may have systemic symptoms. UCD in the abdomen and pelvis has been only described in the radiology literature as a focal enhancing mass of varying locations, including the retroperitoneum, mesentery, and hepatic porta[4].

A 53-year-old man was well until one week before admission with renal colic with an onset of pain strongest at the right paravertebral region and radiating in the right iliac crest. Excretion urography performed in another hospital showed a slight pyelectasis of the right kidney and a left renal duplication with ureter bifidus, while, incidentally, abdominal ultrasound showed a calcified mass (3.4 cm × 3.4 cm) in the left hilar region of the kidney. Then the patient was subsequently referred to our tertiary care centre for further evaluation and treatment .

On physical examination the patient was afebrile and appeared well. The pulse was 80 bpm and the blood pressure 130/70 mm Hg. No lymphadenopathy was found. A non-tender liver edge descended 2 to 3 cm below the right costal margin; the spleen was not felt. Peripheral blood counts, liver function tests, cancer antigen (CA 19-9), carcinoembryonic antigen (CEA) and β-2 microglobulin were within normal levels. Immunologic tests for hepatitis A, B, C were negative. An ELISA for human immunodeficiency virus antibodies was negative. A postoperative ELISA (assay against viral latency-associated nuclear antigen) and a polymerase-chain-reaction test for herpes simplex virus 8 was negative and the serum interleukin 6 level was normal.

The patient had undergone a thorough systematic investigation, which included abdominal ultrasonography, computed tomography (CT), endoscopic ultrasound with fine-needle aspiration and endoscopic retrograde pancreatography (ERP). A spiral abdominal CT examination showed a well-circumscribed (5.5 cm × 4.5 cm × 4.5 cm) hypervascularized mass of soft tissue density with focal calcification in the tail of the pancreas without evidence of invasion of surrounding structures or vessels (Figure 1A). A thoracic and neck CT was normal. Endoscopic ultrasound revealed a solid, well defined, slightly heterogeneous, hypoechogenic soft-tissue mass with central calcification. Local lymph nodes were not enlarged (Figure 1B). The cytological evaluation of endosonography controlled fine-needle aspiration biopsy disclosed lymphatic tissue with focal sclerosis. In ERP (Figure 2) a malignant stricture of the pancreatic duct could be ruled out and a slight parenchymography in the tail of the pancreas with circular calcification of the tumor projecting around the pancreatic duct was shown. Postoperative microscopical examination of a specimen of bone marrow obtained by needle aspiration biopsy disclosed only slight hypercellularity. 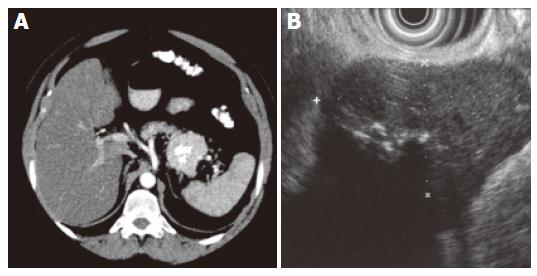 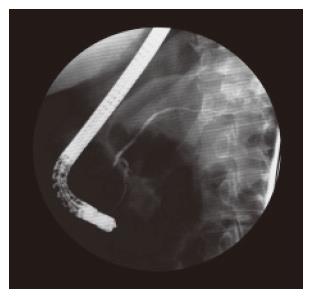 Figure 2 Endoscopic retrograde pancreatography (ERP) shows no malignant stricture of the pancreatic duct and a slight parenchymography in the tail of the pancreas.

Then the patient subsequently underwent left hemipancreatectomy with splenectomy. The specimen of hemipancreatectomy had a spheroidal tumor mass measuring up to 4.6 cm, which was demarcated by a fibrous pseudocapsule (partially with tumor infiltration) from normal tumor-free pancreas tail tissue (12 cm × 7 cm × 4 cm, 367 g). Remarkably, there was a central calcification 3.2 cm in diameter (Figures 1A and 3B). Microscopic examination of the mass revealed germinal centres with hyalinized venules originating from a hypervascular mantle zone surrounded by small lymphocytes in a concentric onionskin pattern with focal hyaline deposits, which is characteristic for hyaline-vascular type of Castleman’s disease (Figures 3A and 3B). The interfollicular stroma showed few plasma cells expressing light chains and IgM. The patient’s postoperative course was without complications and no recurrence has occurred after a two year follow up period in our patient.

Figure 3 A: Germinal centers with hyalinized venules originating from a hypervascular mantle zone surrounded by small lymphocytes in a concentric onionskin pattern (hematoxylin and eosin); B: Areas of heterotopic calcification of the central part of the tumor (left panel) and hyaline deposits (right panel) (hematoxylin and eosin).
DISCUSSION

Unicentric Castleman’s disease commonly occurs in the mediastinum (over 50 %), but has also been identified in multiple anatomic locations, including the neck, the pelvis and the axilla[5]. So far, UCD in the abdomen and pelvis has been described in the radiology literature as a focal enhancing mass of varying location, whereas UCD in the pancreas constitutes an extremely rare entity, which can imitate a tumor originating from pancreatic tissue[4]. Prior to this report, endoscopic retrograde cholangiopancreatography and endoscopic ultrasound findings of pancreatic Castleman’s are not available. The patient had no systemic symptoms, the pancreatic mass was well defined and hypoechogenic on endoscopic ultrasonography and showed no contact between the main pancreatic duct with circular calcification projecting around the pancreatic tail at ERP. On abdominal CT homogeneous enhancement with central pattern of calcification was found, as described in the literature[4,6,7]. Hence, possible differential diagnoses of this indeterminate tumor of the pancreatic tail containing central calcifications were acinar cell carcinoma, solid and papillary epithelial neoplasm, solid cystic tumor, serous cystadenoma or cystic teratomas of the pancreas, which are all known as well defined tumors with calcification patterns[8,9]. Castleman’s disease in the abdomen and pelvis displays a variety of calcification patterns, including punctuate, coarse, peripheral, and “arborizing”. In a recently published retrospective review of 16 cases of abdominal and pelvic manifestations, 31% showed calcification, one with an arborizing pattern and the remaining lesions with punctuate calcification[4].Calcification with a diameter of 3.2 cm in a case of monocentric or multicentric disease has as yet not been observed.

Patients with the hyaline-vascular subtype are usually clinical asymptomatic, as was our patient. Only 3% of the patients present with systemic complaints[3] and less than 10% (usually patients with plasma cell variant) have disease associated syndromes like myasthenia gravis, erythema nodosum, Horton’s arteritis or Moschcowitz’s disease[5,10-13]. In contrast, the multicentric type of Castleman disease (MCD) is accompanied by a general lymphadenopathy, systemic symptoms, laboratory abnormalities, organomegaly and progressive clinical course with potential for malignancy and was not recognized until 1978[14]. Understanding of MCD has greatly expanded since the identification of its association with HIV and HHV-8 infection[15-17]. However, the sources of the immune activation in the unicentric form and the HHV-8 and HIV negative multicentric form are still unidentified. In retrospective studies, complete surgical resection for patients with unicentric hyaline vascular Castleman’s disease has been associated with the best chance of cure [18].