AIM: To determine the in vivo and in vivo effects of cysteamine (CS) on expression and activity of H+-K+-ATPase of gastric mucosal cells in weaning piglets.

METHODS: Eighteen litters of newborn Xinhuai piglets were employed in the in vivo experiment and allocated to control and treatment groups. From 12 d of age (D12), piglets in control group were fed basal diet, while the treatment group received basal diet supplemented with 120 mg/kg CS. Piglets were weaned on D35 in both groups. Six piglets from each group (n = 6) were slaughtered on D28 (one week before weaning), D35 (weaning), D36.5, D38, D42, and D45 (36 h, 72 h, one week and 10 d after weaning), respectively. Semi-quantitative RT-PCR was performed to determine the levels of H+-K+-ATPase mRNA in gastric mucosa. H+-K+-ATPase activity in gastric mucosa homogenate was also determined. Gastric mucosal epithelial cells from piglets through primary cultures were used to further elucidate the effect of CS on expression and activity of H+-K+-ATPase in vivo. Cells were treated for 20 h with 0.001, 0.01, and 0.1 mg/mL of CS (n = 4), respectively. The mRNA expression of H+-K+-ATPase and somatostatin (SS) as well as the H+-K+-ATPase activity were determined.

Gastric acid secretion is regulated by stimulatory factors such as gastrin, histamine and acetylcholine, as well as inhibitory factors including somatostatin (SS). SS is a typical brain-gut-peptide releasing from D cells in the mucous membrane of stomach. Numerous publications reported that SS inhibits gastric acid secretion directly or indirectly by inhibiting the stimulatory effects of gastrin and histamine[5,6]. We found in our previous study that gastric expression of SS mRNA is upregulated in weaning piglets[7], and that gastric acid secretion is low in piglets[8]. Therefore, it is presumed that the increased inhibitory tone of SS is responsible for retarded gastric function development and insufficient gastric acid secretion which contribute, atleast partly, to diarrhea, poor growth and even death in newborn and early-weaning piglets.

Cysteamine (CS), which is able to deplete tissue SS, induces a profound loss of biological and immunological activities of SS both in vivo and in vitro[9,10]. CS is known to increase gastric acid secretion in rats, and is often used to produce the clinical model of gastric ulcer[11-13]. CS is approved to use as a feed additive in animal production to promote growth rate and improve feed efficiency[14]. However, CS application in pig production is mostly restricted to growing and fattening stages[15]. Up to now, the possible effect of CS on gastric acid secretion in weaning piglets remains unknown. Therefore, the present study was designed to examine the effect of CS on gastric acid secretion both in vivo and in vitro, the mRNA expression and activity of H+-K+-ATPase in gastric mucosa tissue and cultured mucosal epithelial cells were determined as response criteria. In addition, the change of SS mRNA expression in mucosal epithelial cells responding to CS exposure was also measured for elucidating the possible mechanisms underlying the CS action.

MATERIALS AND METHODS
Animals and sampling

Eighteen litters of newborn piglets from the 2nd or 3rd farrowing Xinhuai sows were employed in the in vivo experiment and allocated to control and treatment groups. From 12 d of age (D12), piglets in control group were fed basal diet, while the treatment group received basal diet supplemented with 120 mg/kg CS. The diet was formulated according to the requirement of piglets and provided ad libitum. Piglets were weaned on D35 in both groups. Six piglets from each group were slaughtered on D28 (one week before weaning), D35 (weaning), D36.5, D38, D42 and D45 (36 h, 72 h, one week and 10 d after weaning), respectively. Samples of the gastric fundic mucosa were frozen in liquid nitrogen immediately and then stored at -70 ºC until RNA extraction.

For in vitro experiment, four piglets at the age of D28 were killed to collect gastric mucosa for primary cell culture. DMEM (high glucose) and HEPES were products of Gibco, Hyclone, respectively. Trypsin was bought from Sigma and fetal bovine serum was purchased from Hangzhou Sijiqing Company, China.

Cells were dispersed from freshly obtained gastric mucosa of piglets as described previously[16], with minor modifications. Briefly, the gastric mucosa was washed in D-Hank’s solution containing 400 U/mL penicillin, 400 μg/mL streptomycin and dipped in D-Hank’s solution for 30 min. Then the tissues were dispersed by trypsin (0.15 mg/mL) at 37 °C for 1 h, filtrated and centrifuged (1 000 r/min, 5 min). Viability of the cells exceeded 95% as judged by trypan blue exclusion. Then cells at the density of 1×106/mL were cultured (37 °C, 50 mL/L CO2) in a six-well plate containing DMEM (high glucose) with 10% fetal bovine serum, 15 mmol/L HEPES buffer, and 100 U/mL penicillin, 100 μg/mL streptomycin. After 24 h, the culture medium was refreshed by a new medium containing 0, 0.001, 0.01 and 0.1 mg/mL CS, respectively. The cells were continuously cultured for 20 h, and then collected for RNA extraction and H+-K+-ATPase activity determination.

The experiments were undertaken following the guidelines of the regional Animal Ethics Committee.

Total RNA was extracted from the tissue samples with the single-step method of RNA extraction by acid guan-idinium thiocyanate-phenol-chloroform[17]. Total RNA concentration was then quantified by measuring the absorbance at 260 nm in a photometer (Eppendorf Biophotometer). Ratios of absorption (260/280 nm) of all preparations were between 1.8 and 2.0. Aliquots of RNA samples were subjected to electrophoresis through a 1.4% agarose-formaldehyde gel to verify their integrity.

The primers for H+-K+-ATPase were designed according to the cDNA sequence published on GenBank (M22724): 5’-gagaaccaccacctacaag-3’ as sense primer, and 5’-caacagcgaactccaag-3’ as anti-sense primer, the predicted PCR product being 362 bp in size. The SS primers were designed according to the coding region of porcine SS genomic DNA sequence (GenBank, U36385): sense, 5’-agctgctgtctgaacccaac-3’ and anti-sense, 5’-gaaattcttgcagccagctt-3’, the expected PCR product being 161 bp in size. The PCR primers were designed using Primer Premier 5.0 and synthesized by Haojia Biotech. Ltd, China. The Quantum RNA 18S Internal Standards kit (catalogue no. 1716, Ambion Inc., Austin, TX, USA), containing primers and competitors, was used to normalize variations in pipetting and amplification.

Twenty microliters of PCR products was analyzed by 2% agarose gel electrophoresis. The gels were stained with ethidium bromide and photographed with a digital camera. The net intensities of individual bands were measured using Kodak Digital Science 1D software (Eastman Kodak Company, Rochester, NY, USA). The ratio of band density for target genes to that for 18S rRNA was used to represent the abundance of H+-K+-ATPase and SS mRNA expression.

All data were expressed as mean±SE. The data were analyzed by t-test for independent samples or ANOVA with Statistical Packages for the Social Sciences (2000). P<0.05 was considered statistically significant.

RESULTS
Expression and activity of H+-K+-ATPase in vivo 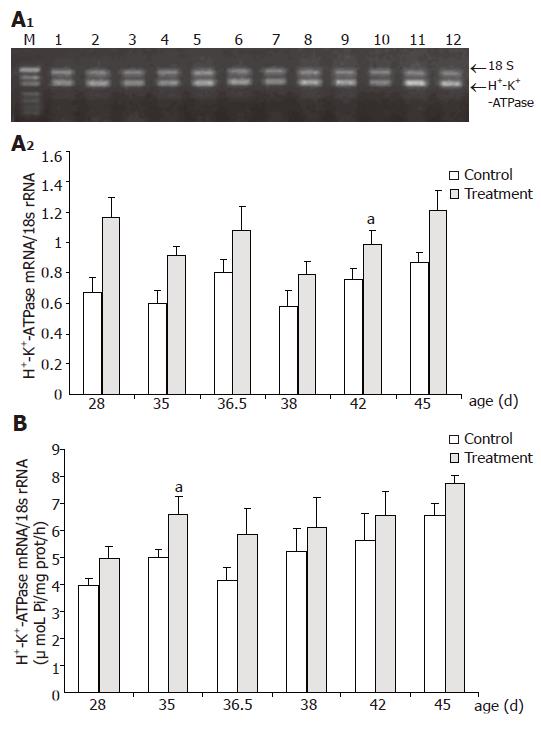 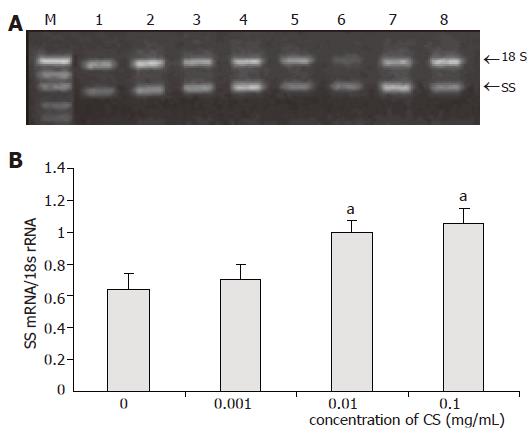 Until now no report is available describing the effect of weaning stress on expression and activity of H+-K+-ATPase. Our results indicated that weaning stress exhibited no effect on expression and activity of H+-K+-ATPase, which might be attributed to the relatively mature age of weaning on D35. This explanation is supported by the study of Efird et al[28], who found that gastric acid secretion of piglets weaned after 35 d of age is not easily affected by weaning.

Our earlier publication reported that the inhibition of gastric acid secretion agrees with the upregulation of gastric SS expression in pre-weaning piglets[7]. Read et al[24] reported that the developmental pattern of gastric SS mRNA is on the contrary to the patterns of gastrin mRNA and H+-K+-ATPase mRNA in ovine. In vitro studies have provided further evidence that endogenous SS plays a role as a strong inhibitory factor in gastric acid secretion, since SS antiserum significantly increases gastric acid release from perfused stomach of sheep[29].

CS possesses the ability to deplete tissue SS. Szabo and Reichlin[9] found that, in rats, CS administration brings about a prompt depletion of radioimmunoassayable SS in plasma, stomach, duodenum, pancreas, and hypo-thalamus. Some researches showed that gastrin plays a significant role in CS-induced hypersecretion of gastric acid. Intravenous infusion of CS in the perfused rat stomach results in a significant increase in acid secretion, which is accompanied with a marked increase in plasma gastrin concentration. The injection of anti-gastrin rabbit serum completely blocks CS-induced acid increase, and infusion of a gastrin receptor antagonist also suppresses CS-induced increase in acid secretion[13]. Van de Brug et al[12] also found that intravenous bolus administration of CS induces increase in serum gastrin concentration and gastric acid outputs. However, there is no report concerning the effect of CS on expression and activity of H+-K+-ATPase. In the present study, we found that CS significantly increased both the expression and activity of H+-K+-ATPase in vivo. To further affirm the effect of CS on H+-K+-ATPase, we added CS to the culture medium of gastric mucosal epithelial cells in vitro. The results indicated that moderate and high concentrations of CS increased significantly both the expression and activity of H+-K+-ATPase, accompanied with a marked increase in the expression of SS. The upregulation of SS mRNA expression might be the consequence of SS depletion. The signal of SS depletion feeds back to the cells to boost SS synthesis in order to maintain homeostasis. Kanayama and Liddle[30] also found that the content of SS mRNA in duodenum is reduced after SS perfusion in rats. However, this upregulation might be temporal, since SS mRNA in stomach and brain significantly increases, then reduces after perfusion of CS in rats[31]. These authors presumed that SS mRNA upregulation results from SS depletion, and the subsequent SS mRNA downregulation is caused by direct effect of CS on SS expression.