AIM: To evaluate the role of reactive oxygen species in the pathogenesis of acute ethanol-induced gastric mucosal lesions and the effect of Nigella sativa L oil (NS) and its constituent thymoquinone (TQ) in an exper-imental model.

RESULTS: NS and TQ could protect gastric mucosa against the injurious effect of absolute alcohol and promote ulcer healing as evidenced from the ulcer index (UI) values. NS prevented alcohol-induced increase in thiobarbituric acid-reactive substances (TBARS), an index of lipid peroxidation. NS also increased gastric glutathione content (GSH), enzymatic activities of gastric superoxide dismutase (SOD) and glutathione-S-transferase (GST). Likewise, TQ protected against the ulcerating effect of alcohol and mitigated most of the biochemical adverse effects induced by alcohol in gastric mucosa, but to a lesser extent than NS. Neither NS nor TQ affected catalase activity in gastric tissue.

CONCLUSION: Both NS and TQ, particularly NS can partly protect gastric mucosa from acute alcohol-induced mucosal injury, and these gastroprotective effects might be induced, at least partly by their radical scavenging activity.

Intragastric application of absolute ethanol has long been used as a reproducible method to induce gastric lesions in experimental animals[1]. Gastric lesion is accompanied with the formation of free radicals (FRs) and reactive oxygen species (ROS)[2-4]. These radicals in particular seem to play an important role in ulcerative and erosive lesions of the gastrointestinal tract[5], as they attack and damage many biological molecules. Therefore, treatment with antioxidants and FR scavengers can decrease ethanol-induced gastric mucosal damage[6,7].

The black seed, Nigella sativa L (NS), a member of the family of ranunculaceae, contains more than 30% of fixed oil and 0.4-0.45 % wt/wt of volatile oil. The volatile oil contains 18.4-24% thymoquinone (TQ) and 46% many monoterpenes such as p-cymene and α-piene[8]. Recently, clinical and animal studies have shown that extract of the black seeds have many therapeutic effects such as immunomodilative[9], antibacterial[10], hypotensive[11], hepatoprotective[12] and antidiabetic effects[13]. Ohkawa et al[14] also reported that NS oil and its derivative TQ inhibit eicosanoid generation in leukocytes and membrane lipid peroxidation. However, the gastroprotective effect of this plant and its major constituent against ethanol-induced gastric mucosal injury remains unclear.

In the present investigation, we studied the influence of NS on gastric mucosal lesions and the redox state induced by ethanol and to compare its actions with those of its constituent TQ.

The NS seeds were purchased from a local herb store, Van, Turkey. Voucher specimens were kept at the Department of Biochemistry, Yuzuncuyil University, Van, Turkey, for the future reference. The seeds of NS were powdered in a mixer, placed in a distillation flask and the volatile oil with 0.2% yield was collected by steam distillation. TQ 2-isopropyl-5-methyl-1,4-benzoquinone, was purchased from Sigma (St. Louis, MO, USA).

Forty male Wistar albino rats, weighing 200-250 g (aged 4 mo), were supplied by The Center of Medical Investigations of Yuzuncu Yil University. The animals were fed with a standard rat chaw (Murat Food Factory, Ankara, Turkey) and allowed to drink water ad libitum, but they were deprived of food 12 h before the experiment. The animals were housed in a single temperature controlled (20-25 oC) cage in dark/light cycle. All procedures were performed in sterilized conditions. All animals received human care according to the criteria outlined in the “Guide for the Care and Use of Laboratory Animals” prepared by the National Academy of Sciences and published by the National Institutes of Health.

Rats were assigned into 4 groups (each containing 10 animals). Control group was given physiologic saline orally (10 mL/kg body weight) as the vehicle (gavage), ethanol group was administrated 1 mL (per rat) absolute alcohol by gavage. The third and fourth groups were given NS (10 mL/kg body weight) and TQ (10 mg /kg body weight p.o) respectively 1 h prior to alcohol intake. One hour after ethanol administration, the animals were euthanized by cervical dislocation. The stomach was excised, cut along the greater curvature, and gently rinsed in tap water. The stomach was stretched on a piece of cork with mucosal surface up, and then examined in a standard position for macroscopic examination. Scoring of ulcer was performed with the help of magnifying glass. Lesion size (mm) was determined by measuring each lesion and its greatest diameter was recorded in the case of petechial lesions. Four such lesions were considered to be the equivalent of an 1 mm ulcer. The sum of the total severity scores in each group of rats divided by the number of animals, was expressed as the mean ulcer index (UI).

Stomachs were cut into small pieces and homogenized in 0.15 mol/L ice-cold KCl using Heidolf Diax 900, type 595 (Germany) to give 20% homogenates. The homogenates were then made into aliquots and used for the assessment of antioxidant parameters.

MDA levels were determined as previously described[15]. Less than 0.2 mL of 10% (w/v) tissue homogenate, 0.2 mL of 8.1% sodium dodecyl sulfate (SDS), 1.5 mL of 20% acetic acid solution adjusted to pH 3.5 with NaOH, and 1.5 mL of 0.8% aqueous solution thiobarbituric acid (TBA) were added into the sample. The mixture was made up to 4.0 mL with distilled water, and heated at 95 0C for 60 min. After cooling, 1.0 mL of distilled water and 5.0 mL of the mixture of n-buthanol and pyridine (15:1, v/v) were added and shaken vigorously. After centri-fugation at 4 000 r/min for 10 min, the organic layer was taken and its absorbance at 532 nm was measured. Total TBA-reactive materials were expressed as MDA, using a molar extinction coefficient for MDA of 1.56×105 cm/mol/L. MDA level was expressed as nmol/g.

Reduced glutathione (GSH) was determined according to the method described by Sun[16]. The GSH concentration (µmol/g) was computed from a standard curve constructed using different concentrations of standard GSH.

Stomach homogenate (20%) was centrifuged at 10 000 g for 10 min for 30 min at 4 0C (Beckman XL-70, USA). Following centrifugation, the supernatant (cytosolic fraction) was carefully removed from the pellet and used directly for assay of the enzymatic activities of SOD, GST and CAT.

SOD activity was detected according to Sun and Habig[17]. One SOD unit was defined as the enzyme amount causing 50% inhibition in the NBTH2 reduction rate. SOD activity was also expressed as U/mg protein of stomach tissue sediment.

CAT activity was determined according to the method of Lowry[19]. In short, the supernatant (50 µL) was added to a quartz cuvette containing 2.95 mL of 19 mmol/L H2O2 solution prepared in potassium phosphate buffer (0.1mol/L, pH 7.4). The change in absorbance was monitored at 240 nm over a 5-min period using a spectrophotometer (Shimadzu UV-1201, Japan). Commercially available CAT was used as the standard. CAT activity was expressed as U/g tissue.

The amount of protein was determined by the Lowry method[20].

The data were expressed as mean±SD and analyzed by repeated measures of variance (ANOVA). Tukey test was used to test for differences among means for which ANOVA indicated a significant (P<0.05) F ratio. 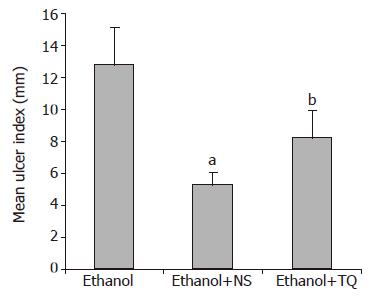 ROS are continuously produced during normal physiologic events, and removed by antioxidant defence mechanisim[21]. In pathological conditions, ROS are over produced and result in lipid peroxidation and oxidative damage. The imbalance between ROS and antioxidant defence mechanisms leads to oxidative modification in the cellular membrane or intracellular molecules[22]. Recent studies showed that ROS are one of the important factors in the pathogenesis of ethanol-induced mucosal damage[7,23,24]. Some ROS scavengers or inhibitors such as melatonin have protective effects on indomethacin- or ethanol-induced acute gastric injury in rats[25,26]. The cytoprotective role of antioxidants in the prevention and healing of gastric lesions has been widely investigated in a number of studies[24,27].

In the present study, administration of absolute alcohol by gastric gavage induced marked damage to the gastric mucosa that was obvious by macroscopic examination. The lesions were elongated hemorrhage and confined to the glandular portion with the highest subjective ulcer-scoring rate.

The gastric activities of SOD and GST notably decreased following alcohol intake. The CAT activity, however, was unchanged. These results are in line with previous reports that demonstrated marked alterations in the enzymatic antioxidants following acute administration of alcohol to rats[3,28]. Depletion of non-protein sulfhydryl concentrations[1], modulation of nitric oxide sytem[29], reduction of mucosal blood flow[30], and autonomic nervous system regulation[31], are involved in the development of gastric lesions. One of the major mechanisms underlying the induction of gastric erosions by absolute alcohol is the oxidative damage with its dual events of lipid peroxidation and oxygen reactive species generation. Actually, oxygen-derived radicals have been implicated in the pathogenesis of gastric tissue damage and ulcerogenesis[6,32,33].

Pretreatment with a single oral dose of NS could partly reduce the ulcer index and promote healing of gastric lesions induced by acute intake of alcohol in rats. NS significantly decreased the gastric MDA content while it increased the gastric level of GSH compared to alcohol. The gastric activities of both SOD and GST were markedly elevated following administration of NS, whereas the CAT activity was not altered. Likewise, prior administration of TQ to animals could protect gastric mucosa and ameliorate most of the biochemical adverse effects induced by alcohol application, but to a lesser extent than NS.

These findings are in good agreement with a recent study by El-Denshary et al[34]. The anti-ulcerogenic effects of NS can be attributed to the improvement of the antioxidant status of animals due to an increase in mucin content of the gastric mucosa[34], or the presence of FR scavenging substances such as TQ[35]. It was also reported that NS given to sensitized quinea pigs, inhibits FR generation, and increases serum levels of SOD and glutathione[14]. NS could protect the gastric mucosa by increasing the bioavailability of arachidonic acid, resulting in biosynthesis of the cytoprotective prostaglandins in the stomach[36]. NS has also been reported to produce a marked inhibition on the release of leukotrienes, which cause mucosal tissue injury and hypoxemia[37]. Therefore, it may alter the delicate balance between prostaglandins and leukotrienes in the gastric mucosa favoring cytoprotection. TQ is the main active component of NS, and is able to inhibit lipid peroxidation[14]. Moreover, its ability to preserve the cell membrane integrity can be proven by the restoration.

In conclusion, pretreatment with NS and TQ, par-ticularly NS can partly protect the gastric mucosa against the injurious effects of absolute ethanol and promote ulcer healing. NS or TQ can also mitigate most of the biochemical adverse effects induced by alcohol instillation in gastric tissue. Further studies are required to clarify the anti- ulcer and antioxidant action of NS or TQ.