AIM: To investigate the clinical significance of KL-6 as a tumor marker of HCC in two different ethnic groups with chronic liver disease consecutively encountered at outpatient clinics.

METHODS: Serum KL-6 was measured by the sandwich enzyme immunoassay method using the KL-6 antibody (Ab) as both the capture and tracer Ab according to the manufacturer’s instructions (Eisai, Tokyo, Japan). Assessment of alpha fetoprotein (AFP) and protein induced vitamin K deficiency or absence (PIVKA-II) was performed in both groups using commercially available kits.

CONCLUSION: KL-6 is suggested as a tumor for HCC. Its positivity may reflect HCC-associated cholestasis and/or local tumor invasion.

Hepatocellular carcinoma (HCC) is the 4th most common cancer worldwide, and it is a well-known complication of chronic hepatitis[1,2]. Asymptomatic patients diagnosed as HCC through screening programs are more likely to be candidates for curative treatment and have improved short- and medium-term survival[3,4]. Although serum alpha-fetoprotein (AFP) had been shown to be associated with HCC since 1963[5], unfortunately it is also elevated in a wide variety of non-hepatic malignancies[6,7] and benign hepatic conditions[8,9]. Moreover, it is uncertain whether serum AFP is a useful marker for HCV-related HCC in some ethnic groups e.g., North American patients of African origin[10]. Thus, searching another tumor marker, that together with AFP could improve the diagnostic utility of the later, seemed to be justified. KL-6 was originally found using a murine monoclonal antibody that recognized an undefined sialylated carbohydrate chain on a mucin-like glycoprotein[11] which was also defined as MUC1[12]. The cell membrane MUC1 was found to regulate cell adhesion properties[13]. KL-6 has been first shown to be elevated in patients with interstitial pneumonia[14]. It was also reported to have a high positive rate in different non-hepatic malignancies and its expression was also correlated with metastatic potential of the primary tumor in some of them[15-17]. It has also been studied as a fibrosis marker in patients with HCV-related chronic liver disease[18] and was found to correlate with the degree of irregular regeneration of hepatocytes[19]. A recent study addressed its clinical significance as a tumor marker in HCV-related HCC[20]. However, all these studies investigated KL-6 in HCV-related disease only so that its actual significance as a marker for screening HCC in patients with different chronic liver disease is not yet fully understood. In this study, we aimed to investigate KL-6 as a tumor marker in consecutive patients with chronic liver disease seen at outpatient settings in two different ethnic groups of possible different risk factors for HCC, so that we could get a wider spectrum of disease in order to assess KL-6 validity for HCC screening.

Chronic liver disease and cirrhosis were identified and diagnosed according to liver biopsy findings, clinical and/or radiological evidence of portal hypertension. HCC was excluded by imaging studies (abdominal ultrasound (US), computed tomography (CT), magnetic resonance imaging (MRI) and/or hepatic angiography), one of which must have been performed at least 6 months following the measurement of AFP.

HCC was diagnosed when meeting our inclusion criteria of positive cytology and/or histology or by the presence of characteristic hepatic masses on liver CT, MRI and/or hepatic angiography (i.e., enlarging tumors and/or tumors with typical arterial vascularization).

Serum KL-6 was measured by the sandwich enzyme immunoassay method using the KL-6 antibody (Ab) as both the capture and tracer Ab (14) according to the manufacturer’s instructions (Eisai, Tokyo, Japan). KL-6 cut-off point was set at 500 U/L for this study. Assessment of alpha fetoprotein (AFP) and protein-induced vitamin K deficiency or absence (PIVKA-II) was performed using commercially available kits. Cut-off points were set at 10 ng/mL for AFP and 40 mAU/L for PIVKA-II.

A difference in mean age, prevalence of advanced Child class and HBV infection was observed between Egyptian and Japanese patients with HCC (Table 1). However, no difference in tumor characteristics was found between the two studied populations (Table 2).

KL-6 and other tumor markers in HCC 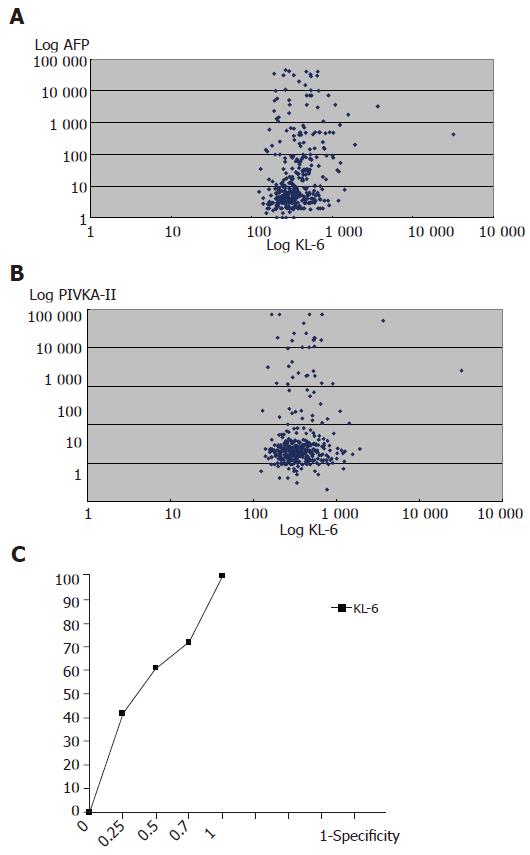 KL-6 in Egyptian vs Japanese

Mean KL-6 was significantly higher in Egyptians (576±522) in comparison with Japanese (510±300) HCC patients (P = 0.041) (Table 6). Although a significant difference in mean KL-6 level between HCC and non-HCC was observed in both Egyptian and Japanese patients with chronic liver disease (P<0.001 respectively), the difference was not statistically significant among Japanese patients with HCV-related disease (Table 6). No difference in mean KL-6 level was found between cirrhotic and non-cirrhotic in either HCC or non-HCC patients.

In the HCC groups of both Egyptian and Japanese patients; KL-6 showed no significant association with tumor site, echogenicity or multiplicity. However, a significantly lower mean KL-6 (Table 7) was noticed in larger size tumors of >5 cm (371±168 U/L) in comparison with tumors of less than or equal to 5 cm (537±323) (P<0.05 in the Japanese group).

KL-6 was studied as a tumor marker in different mali-gnancies like breast, lung and pancreatic cancer and it was reported to be elevated in up to 50% of these mali-gnancies[14]. Two previous studies by Moriyama et al[19,20] addressed KL-6 as a tumor marker for HCC in patients with HCV-related chronic liver disease, and his results showed that the estimated cumulative incidence of HCC development in HCV-related chronic liver disease patients was significantly greater in patients with positive KL-6[19] and suggested KL-6 to be used as a serological marker for HCC development in HCV-positive patients[20]. In our study, we included consecutive patients with chronic liver disease seen at outpatient settings in two different ethnic groups of possible different risk factors for HCC[22,23] in order to have a wider spectrum of disease to judge KL-6 validity as a diagnostic test for HCC; however, one limitation was that most of the encountered patients in the two settings were actually with HCV-related disease with low proportion of HBV and non-viral-related disease. Our results showed a significantly higher mean KL-6 in HCC compared with non-HCC; either with or without LC; in addition no difference in mean KL-6 was found among HCC patients with and without LC; such findings together point to KL-6 association with HCC independent on the presence or absence of LC. A significantly higher mean KL-6 level was found in HBV-related in comparison with HCV-related HCC in both Egyptian and Japanese populations; a finding that deserves future study on a larger population of HBV-related disease. Our results also showed a significantly higher mean KL-6 level in HCC patients of Egyptian compared with Japanese race. The finding of a difference in the clinical background between both in terms of lower mean age and lower prevalence of HBV-related HCC could reflect a difference in the risk factors for HCC in both groups. Also, a higher prevalence of advanced Child class in the HCC Egyptian patients was observed that could stand behind the finding of higher mean KL-6 level in this group compared to their corresponding Japanese group. Although we excluded patients with overt schistosomal from this study, still some Egyptian patients had a past history of schistosomiasis with US evidence of hepatic periportal fibrosis (denoting a background of schistosomal liver disease) that could also explain the finding of higher mean KL-6 level in Egyptian HCC patients, if we consider the possibility that KL-6 could be a fibrosis marker too[21]. This topic is highly suggested for future study.

We used a cut-off point of 500 U/L for KL-6 posi-tivity in this study; however, applying the ROC analysis showed that a cut-off point of 334 U/L would give the best sensitivity in our study population of 60% compared with only 32% for a cut-off (500 U/L); however, the best specificity was obtained using the later. Moriyama et al[19,20] used a cut-off point of 300 U/L in his analysis of KL-6 in HCV-related disease. KL-6 serU/Level did not correlate with either serum AFP or PIVKA-II levels, which points to its behavior independently from either of them and this may justify its clinical significance as an independent tumor marker for HCC diagnosis when considered with both AFP and PIVKA-II. Our results also supported this finding as AFP specificity for HCC diagnosis improved from 78% for AFP alone and 93% of both AFP and PIVKA-II to 99% when combined with KL-6. Univariate analysis showed that low serum albumin, hyperbilirubinemia and elevated ALP were significantly associated with positive KL-6 in HCC patients, while KL-6 showed no association with LC in turn, and this denotes a possible association between positive KL-6 and deterioration of hepatic condition in HCC patients independent from their cirrhotic status; a finding that might point to KL-6 as a predictor of tumor aggression and/or local or systemic metastasizing potential. A follow-up study is needed to confirm its exact role in this regard.

We would like to thank Takeda Foundation, Osaka, Japan for their financial support. We also thank Dr. Alla Sad, Dr. Essam Abd Alla, Dr. Khaled Gad for their help with various laboratory techniques.