Inflammatory bowel disease (IBD) is an idiopathic inflammatory disease of the gastrointestinal tract. The pathophysiology of IBD is probably the result of the complex interaction of genetic susceptibility and environmental influences. There is a well-known risk of thrombosis in patients with IBD. We present the case of a 53-year-old man with ulcerative colitis, who spontaneously developed intracranial sinus thrombosis that was treated with low molecular weight heparin. Literature was searched to assess the frequency and characteristics of cerebral sinus thrombosis in IBD and the role of certain etiopathological factors in such thrombotic patients.

Inflammatory bowel disease (IBD) is an idiopathic inflammatory disease of the gastrointestinal tract. The pathophysiology of IBD is probably the result of the complex interaction of genetic susceptibility and environmental influences. The exact pathogenesis of IBD is unknown. There is a well-known risk of thrombosis in patients with IBD. This pro-thrombotic state seen in IBD has been proposed as a factor contributing to the pathogenesis of IBD, especially in Crohn’s disease[1,2]. This conclusion is based on the presence of thrombi in the small vessels of mucosa and submucosa. Furthermore, some IBD patients have been successfully treated with heparin[3-6].

Thromboembolism is a serious complication of IBD patients. The yearly incidence of thromboembolic events in IBD is 13-64/1 000[7,8]. Corticosteroid usage to diminish inflammatory activity and concomitant abnormalities of coagulation cascade such as factor V mutations, protein C and S deficiency, prothrombin gene mutation, hyperhomo-cysteinemia could increase the risk of thromboembolic complications. On the other hand, some researchers found that the incidence (1.5/1 000 IBD patients per year) of venous thrombosis does not increase in IBD patients and that IBD patients have venous thrombosis earlier in life than non-IBD patients[9].

A 53-year-old man suffering from abdominal pain, bloody diarrhea (8-10 stools per day) and weight loss (10 kg in the past 3 mo) was admitted to our hospital in April 2003. On admission, his body temperature was 38°C. His physical examination revealed no abnormalities except for mild sinusal tachycardia (100 pulses/min). Neurological examination revealed no paralysis and sensory motor disturbances. The blood and stool cultures obtained on his first day of admission did not yield any pathogens. Microscopic stool examination revealed abundant leukocytes and erythrocytes. The stool C. Difficile toxin A assay was negative. Laboratory data showed elevated C reactive protein (CRP) levels and ESR, mild elevations of aminotransferases with ALT/AST ratio >1, mild thrombocytosis (568 000/mm3) and normochromic anemia with a hemoglobin value of 10 g/L. His colonoscopic evaluation revealed loss of mucosal vascular pattern, granularity and friability of the whole colonic mucosa and widespread pseudopolyps. Histopathological examination of the rectal mucosa showed an abundant infiltration of neutrophils, lymphocytes and plasma cells. Histopathology also revealed cryptitis and crypt abscess in some areas. The patient’s ultrasonography and carcinoembryonic antigen (CEA) levels were normal. Hepatotrophic virus (Hepatitis B and C) and autoimmune markers (anti-nuclear, anti-smooth muscle and anti-neutrophilic cytoplasmic antibodies) were negative. Based on these findings, the patient was diagnosed with moderately active ulcerative pancolitis and started on 4 g of sulfasalazine as anti-inflammatory therapy. Nutritional support was also provided. One week after treatment, his number of times of defecation decreased to 5 stools per day with no blood and the patient was afebrile. CRP levels decreased, thrombocytes were in normal limit but mild anemia persisted. During the second week of therapy the platelet count was 130 000/mm3. Sulfasalazine was discontinued and 40 mg prednisolone was started. On the third day of corticosteroid treatment, the patient complained of weakness of the right arm and leg. His neurological examination revealed left sided hemiparesis. Motor strength was 2/5 and 4/5 in upper and lower left extremities, respectively. The patient had mild dysarthria. Deep tendon reflexes were brisk. Plantar response in left side was extensive. Cranial CT scan and T2 weighted magnetic resonance imaging showed bifrontal and right parietal infarction (Figure 1). Sagittal MRI venography revealed signal dropout in the superior sagittal sinus and right transverse sinus (Figure 2). We started low molecular weight heparin (LMWH) therapy immediately. The patient also developed focal motor seizures. He became unconscious (Glasgow coma score was 6) 3 d after the first neurological sign. He was on therapy of LMWH and control CT showed no additional abnormality. Laboratory tests for coagulation abnormalities revealed heterozygous factor V Leiden gene mutation. The patient died of pulmonary nosocomial infection and sepsis 2 wk after the onset of neurological findings. 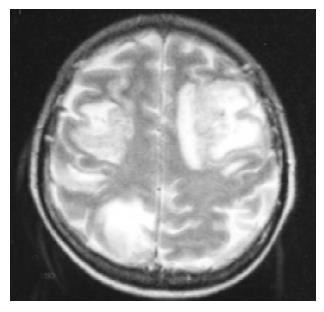 Pro-thrombotic factors (anti-cardiolipin antibodies, hyperhomocysteinemia and changes in the lipid spectrum), IBD-induced alterations in plasma and mucosal hemostasis (increased endothelial activation and tissue factor expression, and impaired inhibition of coagulation in IBD), and changes secondary to inflammation have been suggested as the explanatory factors for the high prevalence of thromboemb-olism in IBD patients. The balance between pro-coagulant and pro-fibrinolytic factors seems to favor plasma hypercoagulability in IBD patients. Inflammation-induced changes in serum, endothelial cells and platelets induce plasma alterations resulting in coagulation activation, whereas coagulation activation induces pro-inflammatory effects, thus providing a looping chain of reactions[11].

van Bodegraven et al[12] studied hemostatic imbalance in active and quiescent ulcerative colitis and found that coagulation and fibrinolytic cascades are activated in active ulcerative colitis and 20% of patients are in remission with a hemostatic imbalance in favor of coagulation. The clinical significance of these phenomena is unknown. Meanwhile previous studies have shown that activated plasma coagulation markers increase in clinically quiescent IBD[13]. Thus, clinical activity of the disease may increase the risk, but it is probably of minor importance.

Deep venous thrombosis and pulmonary emboli are the most common thrombotic complications in IBD patients, however, cerebral vascular involvement is rare. It was reported that IBD patients are relatively young and have no other relevant risk factors except for IBD[19].

Cerebral venous and dural sinus thrombosis in association with IBD is rare and few cases have been reported[20-24]. Some clinical characteristics of these patients are summarized in Table 1. The frequency of cerebral venous thromboembolic complications in ulcerative colitis patients appears to be greater than that in patients with Crohn’s disease. The superior sagittal sinus and lateral sinuses are commonly involved[25-27]. Less frequently, isolated cortical venous thromboses have been reported[22]. Although one case that present with sagittal sinus thrombosis 10 years after proctocolectomy for ulcerative colitis has been reported, these cerebral venous thrombotic events occur more frequently in patients with active inflammatory bowel disease[28-32]. The most frequent symptoms and signs are headache, paresis, seizures, dysphasia and papilla edema. Approximately 1/3 of patients have some coagulation abnormalities such as FV Leiden mutation, hyperhomocysteinemia, positive anti-cardiolipin antibodies[20,26,27]. The clinical outcome is devastating[33-37].

In conclusion, cerebral venous thrombosis is a devastating complication of IBD, especially, ulcerative colitis. The diagnosis of these patients depends on the demonstration of the thrombus by neuroimaging.