The anti-arrhythmic agent amiodarone (AD) is associated with numerous adverse effects, but serious liver disease is rare. The improved safety of administration of daily low doses of AD has already been established and this regimen is used for long-term medication. Nevertheless, asymptomatic continuous liver injury by AD may increase the risk of step-wise progression of non-alcoholic fatty liver disease. We present an autopsy case of AD-induced liver cirrhosis in a patient who had been treated with a low dose of AD (200 mg/d) daily for 84 mo. The patient was a 85-year-old male with a history of ischemic heart disease. Seven years after initiation of treatment with AD, he was admitted with cardiac congestion. The total dose of AD was 528 g. Mild elevation of serum aminotransferase and hepatomegaly were present. Liver biopsy specimens revealed cirrhosis, and under electron microscopy numerous lysosomes with electron-dense, whorled, lamellar inclusions characteristic of a secondary phospholipidosis were observed. Initially, withdrawal of AD led to a slight improvement of serum aminotransferase levels, but unfortunately his general condition deteriorated and he died from complications of pneumonia and renal failure. Long-term administration of daily low doses of AD carries the risk of progression to irreversible liver injury. Therefore, periodic examination of liver function and/or liver biopsy is required for the management of patients receiving long-term treatment with AD.

Amiodarone (AD) is a cationic, amphophilic, iodinated benzofuran derivative primarily used for the treatment of refractory ventricular tachyarrythmias[1]. Although AD has been used since 1962, it causes various side effects affecting the lung, thyroid gland, cornea, peripheral nerves, and liver[1-3]. In early clinical trials, higher maintenance doses of AD (300-800 mg/d) caused serious side effects in the first year of therapy, and these patients required drug withdrawal[1-6]. In the last two decades, several investigators have shown that daily lower doses of AD (< 200 mg/d) are better tolerated but still possess appreciable efficacy in serious cardiac arrhythmias[4-6].

The hepatotoxicity associated with AD is manifested as an asymptomatic and transient elevation of serum aminotransferase[2,3,6-8]. Fortunately, the vast majority of these events are reversible after discontinuation of the medication[2,3,6]. The safer schedule of administration of low doses daily may contribute to reducing the incidence of serious hepatic adverse effects. The histologic appearance of AD-induced liver disease shares several features with that of alcoholic hepatitis. Asymptomatic continuous liver injury by AD may increase the risk of step-wise progression of non-alcoholic fatty liver disease (NAFLD)[7-19]. This implies that severe morphological alterations of the liver may coexist with very mild symptoms in patients receiving long-term treatment with daily low doses of AD. We present herein an autopsy case of AD-induced liver cirrhosis in a patient treated with a low dose of AD daily for 84 mo. We discuss the risk of progression to irreversible liver injury during administration of AD and the value of liver biopsy for patients receiving long-term treatment with a low dose of AD daily.

A 85-year-old male with a history of ischemic heart disease was being treated with AD for continuing symptomatic ventricular arrhythmias. He was admitted with cardiac congestion in December 2001, 7 years after administration of AD had begun. There was no history of alcohol abuse, obesity or diabetes mellitus. Serological screening and PCR examination for hepatitis viruses were all negative. There were no signs of autoimmune hepatitis. His initial dose of AD was 400 mg daily for 17 d, which was then reduced to a maintenance dose of 200 mg daily. The patient had received continuous medication with AD for 84 mo. On physical examination, corneal opacities were found. No skin discoloration or neuronal symptoms were seen. 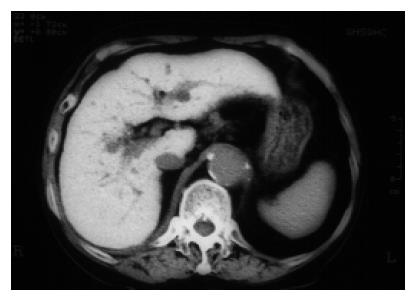 Figure 1 An unenhanced computed tomography (CT) scan of the upper abdomen. The liver has a greatly increased density (111.8 HU). 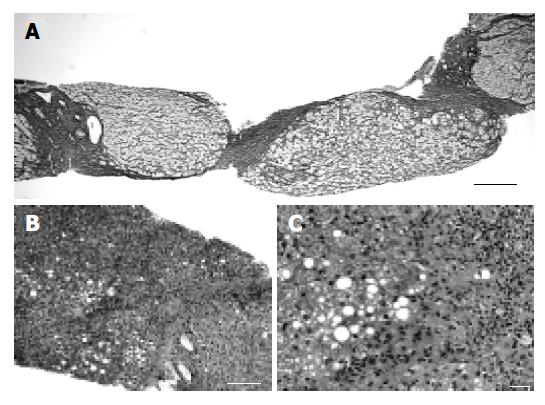 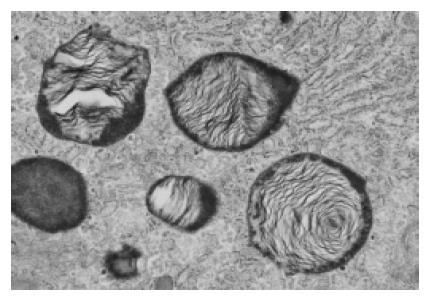 Figure 3 Transmission electron micrograph of the biopsy specimen with lamellated inclusions in the cytoplasm of the hepatocyte (original magnification ×20 000).

Initially, withdrawal of AD led to a slight improvement in the serum aminotransferase level and the ascites. The CT density of the liver decreased to 97.2 HU in February 2002, whereas no significant improvement was observed in the size of the liver. Unfortunately, his general condition deteriorated as a result of complications of pneumonia and renal failure. He died in April 2002.

Autopsy was performed on April 22nd, 2002. Micros-copically, features affected by AD were observed in the follicular epithelial cells of the thyroid gland and in the liver. Notably, there were no histological findings suggesting AD-induced pulmonary toxicity, which is more common and often more serious than hepatotoxicity, whereas both his lungs revealed congestion with pneumonic foci.

We compared the light-microscopic and electron-microscopic findings for the biopsy (December 2001) and autopsy (April 2002) materials (Table 1). Light microscopy of the autopsy materials also revealed micronodular cirrhosis. The biopsy material showed both microvesicular and macrovesicular steatosis, but the autopsy material showed only microvesicular steatosis. The number of hepatocytes with Mallory bodies was similar to that of the biopsy specimen. We counted the number of lysosomes with LI relative to the total number of lysosomes in the liver. The incidence was relatively lower in the autopsy specimen compared with the biopsy specimen (Table 1). Unfortunately, we could not assess the tissue concentration of AD.

The true incidence of AD-induced liver cirrhosis is obscure, since liver biopsy has not been performed routinely in AD-treated patients. Almost all cases of AD-induced liver cirrhosis have been reported in patients receiving higher maintenance doses[15,16], and only five cases arising from administration of daily low doses have been described in the literature (Table 2)[12-14,18,19]. Some investigators have speculated that the total cumulative dose might be more important in estimating the risk of irreversible liver injury[10,15,16]. The cumulative doses of the patients previously reported ranged from 165 to 213 g, with a duration of treatment of 12-48 mo. The present patient had been treated with 200 mg of AD daily for 84 mo, with a total cumulative dose of 528 g. Even though this dosage is greater than that in previous reports, hepatic abnormalities were not detected during the course of treatment. As asymptomatic progression of liver disease might occur more frequently in patients receiving long-term treatment with AD, periodic examination of liver function and/or biopsy should be performed to detect liver injury. Gilinsky et al[9] described that drug withdrawal was insufficient to restore liver function, if irreversible liver damage had already occurred. Early histological examination for hepatic abnormalities is helpful to warn off irreversible liver changes.

We suggest that genetic background might also be important in determining the risk of progression of NAFLD in patients receiving long-term treatment with AD. It is well known that steatosis and non-alcoholic steatohepatitis (NASH) can be induced by drugs such as tamoxifen, some anti-retroviral agents and AD[20-22]. These drugs inhibit the mitochondrial β-oxidation of fatty acids (causing steatosis) and respiration[20,23]. Inhibition of respiration decreases ATP and also increases the mitochondrial formation of reactive oxygen species (ROS). In hepatocytes, ROS and lipid peroxidation products further impair the respiratory chain, either directly or indirectly through oxidative damage to the mitochondrial genome. Mitochondrial dysfunction can also lead to apoptosis or necrosis, depending on the energy status of the cell. ROS and lipid peroxidation products also activate stellate cells, thus resulting in fibrosis. Finally, ROS and lipid peroxidation increase the generation of several cytokines (TNF-α, TGF-β, and Fas ligand) that play various roles in the pathogenesis of drug-induced NASH[20,23].

Some investigators have postulated that in insulin resistance the combination of elevated plasma concentrations of glucose and fatty acids promotes hepatic fatty acid synthesis and impairs oxidation, leading to hepatic steatosis[20,24,25]. Several polymorphisms in genes related to insulin resistance appear to be associated with the severity of steatosis[25-29]. We examined a few polymorphisms in the TNF-α, HFE, CYP2E1, and IL-10 genes, but the susceptibility alleles were not present in the patient (data not shown). However, we are now undertaking a genome-wide single nucleotide polymorphism study in patients with drug-induced NASH[20]. Further, several experimental and clinical studies suggest that a number of drugs could be useful for the prevention and/or treatment of NASH. These genetic and clinical approaches may help increase the safety of the long-term administration of AD.