CONCLUSION: The results suggest that the γ-rays induced chromatid breaks can be possibly used as a good predictor of radiosensitivity, also, unrejoined isochromatid breaks probably tightly related with cell cancerization.

Liver cancer is one kind of malignancy tumor with the highest incidence and clinical risk, especially popular in China. As till now, radiotherapy is the most acceptable and effective method. Low LET (Linear energy transfer) rays, such as X-ray, γ-ray, were often used. Radiobiologists aim to develop an assay or a combinative assay to predict the radiation response of human cancers. Precise prediction of response to radiation could provide the basis for selecting and designing clinical treatment project.

Colony assay or growth assay has the good correlation with the radiation response[1-5]. But as a routine predictive assay, it will take at least 2 or 3 weeks to form the clone, is unlikely to be used for clinical diagnosis and treatment.

The PCC (premature chromosome condensation) technique is very useful for measuring the radiation-induced chromatin breaks in all of the cell cycles[6-9]. especially in G2 phase. In the present study, we investigated the G2 phase radiosensitivity of human hepatoma cells and normal liver cells, compared with other two type of human malignancy tumors. The results showed that the radiosensitivity of normal liver cells is lowest among these four cell lines, suggest that in the course of liver cancer radiotherapy, liver cells will less injured than hepatoma cells and other two tumor cell lines when absorbed same dose of radiation.

Exponentially growing cells were irradiated with γ-rays generated by 60Co source with a dose rate 0.2 Gy/min at Lanzhou medicine college, dose range was from 0 to 8 Gy.

Calyculin-A (BIOMOL America) was used as the PCC inducer, which was dissolved in 100% ethanol as 1 mmol/L stock solution; 50 nmol/L of Calyculin-A was added to the cell cultures before irradiation to score the initial chromatid breaks. Then, cells were incubated for a further 30 min at 37°C in 50 mL/L CO2. Chromosome spreads were then harvested by swelling cells in 75 mmol/L KCl for 20 min at 37°C and fixed with Carnoy’s fixation. A final wash and fixation in the same fixative was completed before dropping cells onto a glass slide and hot humidity drying. Chromosome was stained with 5% Giemsa for 20 min.

Calyculin A is a phosphatase inhibitor, can effectively induce the cells into G2 phase by very little time. It is easy to detect the chromosome damage using PCC technique. Figure 1 shows the G2 PCC chromosome spreads of L02 cell lines exposed to 8 Gy of γ-rays and SMMC-7721 cell lines of 0.5 Gy. 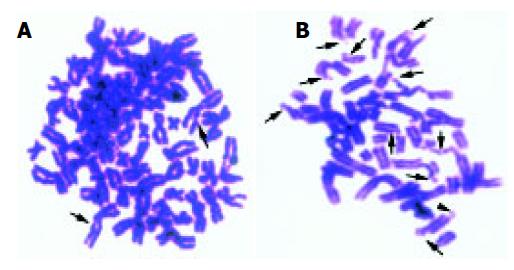 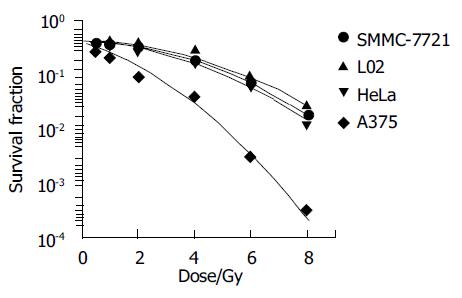 Figure 2 Cell survival curve after exposed to γ-rays. All of four cell lines have a linear quadratic survival curve, which were good agreement with classical model.
Initial chromatid and isochromatid breaks after irradiated with γ-rays in G2 phase 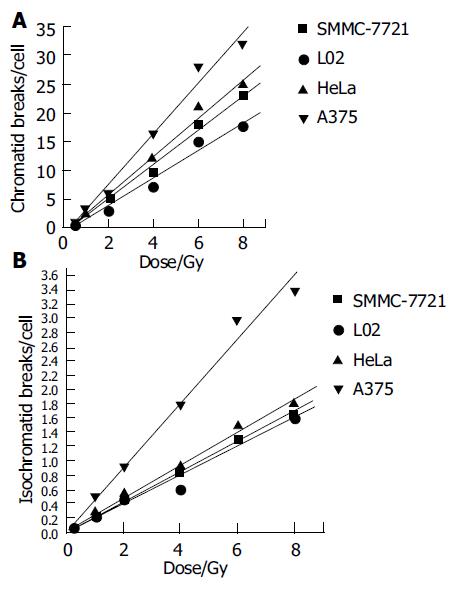 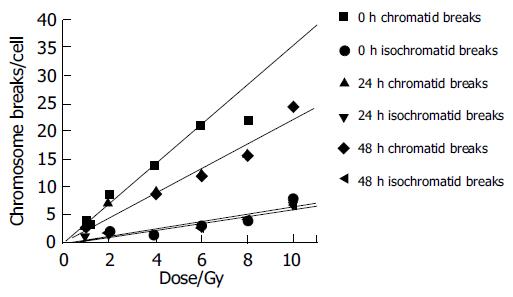 Figure 4 Correlation between chromatid breaks and absorbed dose at 0, 24, and 48 h after exposed to radiation. 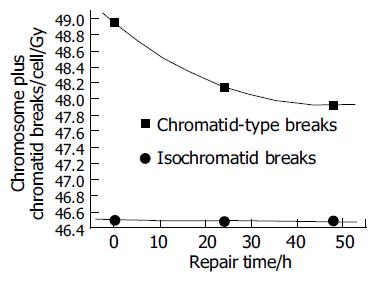 Figure 5 Kinetic repair of chromosome breakages within 48 h after L02 cell line was exposed to γ-rays. The chromatid breaks plus 46 (number of normal human chromosomes) make this change remarkably.
DISCUSSION

Liver cancer is of high risk and mortality. Besides the surgical excision, radiotherapy is the main method after the discovery of X-rays. Before radiotherapy, prompt and exact detection of radiosensitivity of target cells is of great importance.

Many researchers have reported a linear-quadratic cell survival curve in various cell lines irradiated by X-rays, γ-rays, also, linear relationship between chromosome breaks and absorbed dose was discovered[5,8,9,11-15]. With the introduction of the premature chromosome condensation technique[16-18], it is easy to study initial radiation-induced chromosome damage (Figure 1).

In the present study, fitted cell survival curve of four cell lines were linear quadratic (Figure 2), which were consilient with previous studies[8-9]. Among these four cell lines, survival fraction of L02 was highest, A375 was lowest after absorbed same dose of radiation, suggested that human normal liver cells was of much higher resistance to γ-rays than human hepatoma cells, melanoma cells and cervical tumor cells. Radiation injury mainly resulted from oxidative free radicals, reductive glycogens synthesized in liver cells which interact with free radicals reduce the radiation injury.

Since normal liver cells were more radioresistant to γ-rays than other three kind of cancer cells, study the kinetic repair of chromosome damage of L02 cells has the essentiality. Data[4,9,15,16] showed that these irradiation could induce the chromosome damage, the damage will probably result in cancerization. Correct and effective repair of injured chromosome is very important to stop cancerization course. Figures 4 and 5 show the correlation between chromatid breaks and dose at 0, 24 and 48 h after radiation. In the present study, at each time point, chromatid breaks and isochromatid breaks were increased linearly with the dose, and the absolute number of chromatid breaks was much more than that of isochromatid ones, this phenomenon was described by Kawata et al[8]; Suzuki et al[15] reported that this repairing process occurred during the early 10 h after irradiation. This means in the early 24 h, most of any kind of cells end their spontaneous repair process if they are injured. After 24 h, without any artificial factors, injured and normal cells will be stable and continue synthesizing, mitosing, and so on.

Though the radiotherapy by using common irradiation such as γ-ray is very effective, we could not neglect the side-effect which largely reduce the curative effect due to the injury of normal tissue. Heavy ions have the good biophysics characteristics such as Bragg peak of dose distribution which result in the lowest side scatter, higher RBE (relative biological effect) and lower OER (oxygen enhancement ratio). Present study will enrich the essential data for the Heavy-Ion-Radiotherapy project in the Institute of Modern Physics, Chinese academy of Sciences when the national great engineering HIRFL-CSR (heavy ion research facility of Lanzhou-cooling restore cycle) complete at 2005.