AIM: To investigate the value of spiral CT pneumocolon in preoperative colorectal carcinoma.

METHODS: Spiral CT pneumocolon was performed prior to surgery in 64 patients with colorectal carcinoma. Spiral CT images were compared to specimens from the resected tumor.

RESULTS: Spiral CT depicted the tumor in all patients. Comparison of spiral CT and histologic results showed that the sensitivity and specificity were 95.2%, 40.9% in detection of local invasion, and 75.0%, 90.9% in detection of lymph node metastasis. Compared to the Dukes classification, the disease was correctly staged as A in 6 of 18 patients, as B in 18 of 23, as C in 10 of 15, and as D in 7 of 8. Overall, spiral CT correctly staged 64.1% of patients.

CONCLUSION: Spiral CT pneumocolon may be useful in the preoperative assessment of patients with colorectal carcinoma as a means for assisting surgical planning.

With the development of high-resolution scanners, technical refinements in obtaining better quality studies, and the accumulated clinical experience leading to better interpretation, the role, indications, and accuracy of CT of the colon have dramatically enlarged and improved[1-3]. Reliable preoperative determination of the extent of spread of a colorectal carcinoma not only indicates the expected prognosis but also assists management. For obtaining reliable results from CT scan, preparation of the patients, especially complete distention of the colon using water or air as contrast agent, is the most important precondition. Otherwise, collapse of the colon and feces can easily be misinterpreted as tumor. Many studies have shown that water enema spiral CT is a useful modality for preoperative staging of patients with colorectal carcinoma[4-7]. However, water enema can be difficult and distressing in frail elderly patients and has risk of water incontinence. Air insufflation for the colon can be achieved easily and rapidly and is well tolerated by the patients, and air provides an excellent CT contrast medium[8]. There have been few reports concerning the preoperative staging of colorectal carcinoma with spiral CT pneumocolon. Therefore, this study aimed to assess the value of spiral CT pneumocolon in preoperative colorectal carcinoma.

From August 1998 to December 2002, 64 patients with colorectal carcinoma, who were operated on at our institution, underwent spiral CT pneumocolon. There were 40 men and 24 women, ranging in age from 32 to 88 years (mean 59 years). Among the 64 patients who had a prior colonoscopy, 4 of 15 patients had an incomplete barium enema due to barium incontinence, and 19 of 64 patients had incomplete colonoscopy due to inability to cross a distal stricture.

All patients were fasted for at least 12 h before the study and given an oral colon cleansing preparation the night before CT scan. Nine-hundred milliliters of 3% diluted gastrografin solution was given orally 45 min before, so that small bowel loops were opacified. Anisodamine hydrochloride (10 mg, IM) was used to control peristaltic artifact and relax the colon. The patient was previously instructed not to void. As the study progressed, interpretation was more straightforward when the bladder was full.

The patients were positioned on the CT table in supine position. A Foley catheter was inserted into the rectum and 1 500-2 000 mL room air was administered per rectum to distend the colon. The enema was stopped if the patient experienced abdominal discomfort. Adequate distention of the whole colon was confirmed on the scanogram.

Based on previous reports[5,7,8] and our own experience, the following three parameters were established and evaluated:

All patients with colorectal carcinoma were staged on CT according to the modified Dukes’ classification[7]: stage A, tumor limited to the colonic wall; stage B, tumor affecting the serosa or the pericolonic fat; stage C, lymph node involvement; and stage D, tumor infiltrating adjacent organs and/or with metastases. The modified Dukes’ classification was used because this system was currently used by surgeons at our institution.

Two experienced radiologists, who were blind to the surgical and pathologic findings of each patient, interpreted the images as compared to above parameters, and any discrepant readings were solved by consensus. After a minimum of 4 wk, the same two radiologists reviewed the images for the second time. Intraobserver variability was evaluated by means of a weighed k-statistic[9].

The overall results showed good agreement between the two reviews by the two radiologists. The k-statistic for the data was 0.77, representing good intraobserver agreement.

All patients tolerated the spiral CT pneumocolon well with no significant discomfort, and had good bowel preparation and no fluid levels or residual fecal material. The distended colon lumen and normal colonic wall were well seen on spiral CT (Figure 1). Using this technique the normal colonic wall represented a single layer which was 1-2-mm thick. 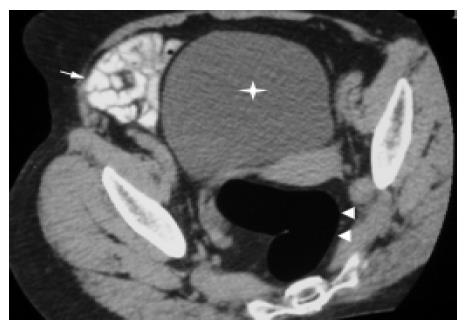 Spiral CT detected the tumor in all patients and the smallest mass was 0.7 cm × 1.0 cm. The lesion was shown as an eccentric focal mass with irregular segmental or circumferential wall ranging 0.7-4.5 cm in thickness, and their extension ranged 1.0-10.0 cm (Figures 2A-C). Most lesions had an uneven, lobulated configuration and large masses had patchy areas of necrosis. Different degrees of distal colonic stricture were presented. The majority of the mass showed moderate to obvious enhancement. 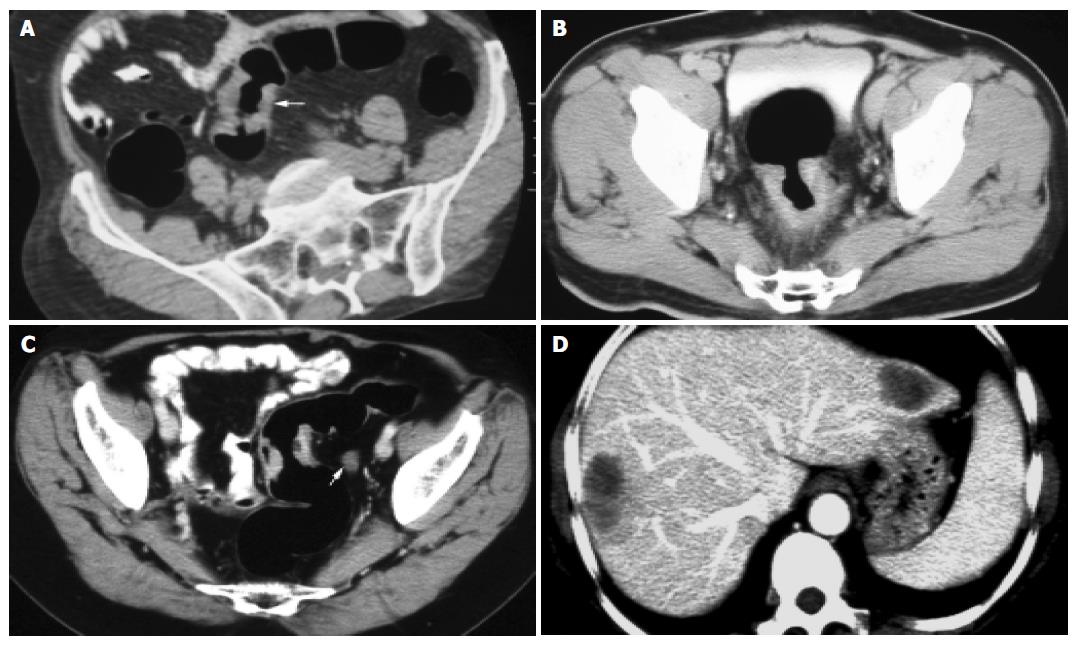 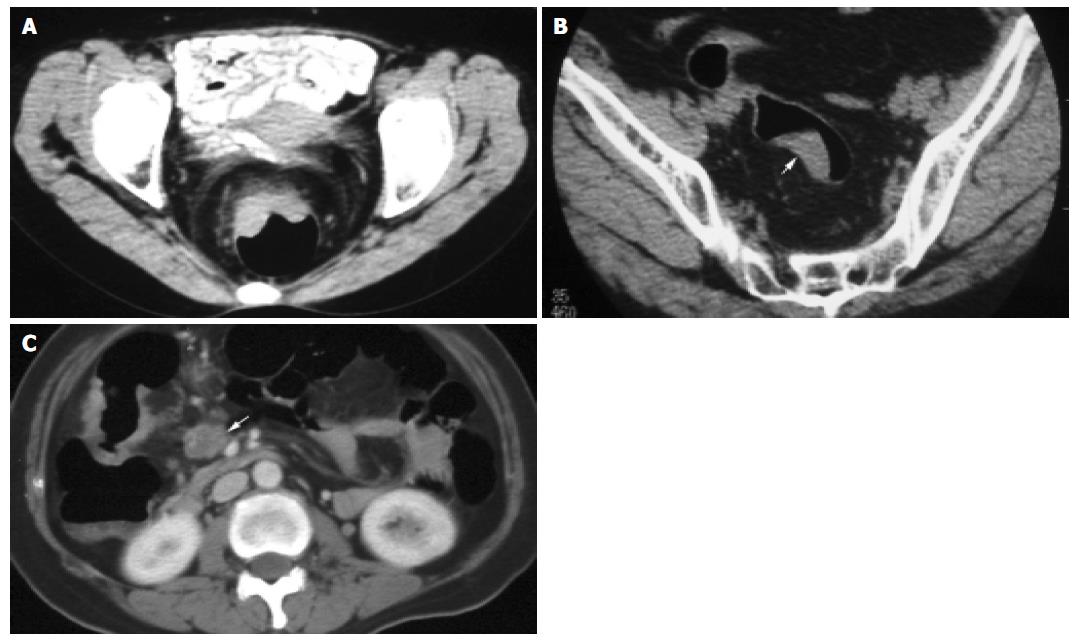 Involvement of lymph nodes less than 5 mm in diameter was seen in 7 (35.0%) of 20 patients. Spiral CT correctly diagnosed lymph node metastasis in 15 of 20 patients (Figure 2C). In the correctly diagnosed group, seven patients showed nodal enhancement, and eight patients showed no enhancement of lymph nodes larger than 1 cm in diameter. Clusters of three or more smaller nodes (each less than 1 cm in diameter) were seen by CT in five patients, histology revealed no evidence of nodal involvement.

Nodal involvement was correctly staged by spiral CT in 55 (85.9%) of 64 patients. In the incorrectly staged group, spiral CT overstaged 3 (Figure 3C) and understaged 5 of 20 patients. Spiral CT evaluation had a sensitivity of 75.0% and a specificity of 90.9%.

Liver metastasis was presented in four patients (Figure 2D), lung metastasis in two patients, and abdominal wall metastasis in one patient. They were all correctly diagnosed by CT. Only one patient with peritoneal seeding was missed due to the small lesion.

Colonoscopy and barium enema are the main methods for diagnosis of colorectal tumors. However, both modalities do not permit a precise preoperative prediction as to whether a tumor is limited to the colonic wall or has spread into surrounding tissues. Patients with severe colonic stricture or barium incontinence may be poor candidates for the two examinations. Our study showed that CT pneumocolon had the potential utility as an adjunctive imaging technique for patients with colorectal carcinoma.

The sensitivity of CT detection depends mainly on the size of the lesion and on the quality of the CT examination. It varies from 68% if no special attempts are made to promote visualization of the colonic lumen to 95% when the colonic lumen is distended well. In this study, the overall detection rate was 100%, and masses with a diameter in 1 cm were identified. Our results corresponded favorably with previous reports[10,11]. This may be due to the adequate preparation of patients and CT pneumocolon technique. CT colonography generated from CT pneumocolon has emerged in recent years. This technique can detect lesions less than 5 mm in diameter, and its sensitivity is over 85% in detection of polyps 10 mm or greater in size, 70-80% of polyps 5-9 mm in size and 60% of polyps smaller than 5 mm[12,13]. It is a viable alternative for screening primary colorectal neoplasms and examining portions of the colon proximal to an obstructing lesion that cannot be traversed by colonoscopy or by barium[3,10,13].

In our experience, CT has a sensitivity of 95.2% and an accuracy of 76.6% in evaluating the local invasion. However, the specificity is only 40.9%. Harvey et al[8] reported that its sensitivity is 100% and specificity is 33%. Zhou et al[2] reported that its sensitivity is 92.9% and specificity is 50.0%. The reasons for the low specificity in local extension may be that CT is not possible to distinguish the single layers comprising the wall and there is no simple CT criterion to differentiate inflammation of the serosa from tumor invasion[2,8]. Matsuoka et al[14] reported that using sagittal or coronal sections improves diagnostic accuracy from 79.4% to 90.4% in assessing the depth of tumor invasion. Endoscopic ultraso-nography (EUS) is superior to CT in detecting the exact depth of parietal invasion, and its accuracy is 84.9%[15]. In our study, the accuracy of EUS was 87.5%, and its specificity was 100% in assessing the local extension.

Colon cancer is potentially curable and decision on treatment is based on the extent of tumor. If extensive local spread of tumor is shown by CT or MRI, the patients can be treated with radiation therapy alone or undergo tumor resection after radiation therapy. The success of subsequent chemotherapy and irradiation can be determined in patients by follow-up CT or MRI, which can be compared to the base-line study before treatment. Recent studies showed that endorectal surface coil MR imaging is valuable in patients with rectal carcinoma to assess involvement of the levator ani[1]. If involvement of the levator ani is demonstrated, an abdominoperineal resection is needed.

In conclusion, spiral CT pneumocolon is a quick and noninvasive method for detecting colorectal carcinoma, and can provide valuable information preoperatively. In addition, it may represent a useful adjunct to colonoscopy or barium enema in patients with colorectal carcinoma.