Among the palliative therapies for unresectable hilar cholangiocarcinoma, radiotherapy can achieve satisfactory local tumor control and possible survival benefit. It can be given in the form of external beam radiotherapy (EBRT), intraluminal brachytherapy (ILBT), or a combination of both. With the advancement in computerized 3D treatment planning system, the accuracy of the delivery of EBRT to the targeted tumor has been much improved. This technique leads to tumor shrinkage and improves bile drainage, thus reducing the incidence of septic complications. Likewise, ILBT imposes a high radiation dose to the tumor volume, bypasses the radiosensitive skin and superficial structures, and therefore spares the surrounding normal structures from radiation toxicity. The reported medium survival for unresectable hilar cholangiocarcinoma is 11 mo with ILBT alone[10] and 14.5 mo with combined EBRT and ILBT[11]. Both techniques offer satisfactory symptom palliation with minimal toxicity and are technically feasible for most patients. However, long-term survival beyond 5 years is very rare after radiotherapy for unresectable cholangiocarcinoma. We reported a patient with unresectable hilar cholangiocarcinoma surviving more than 6 years after combined treatment by EBRT and ILBT, and briefly reviewed the literatures of this treatment modality. 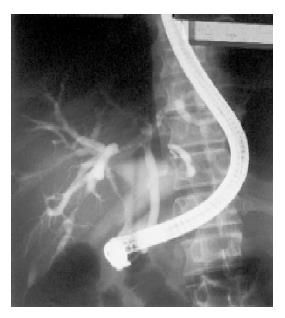 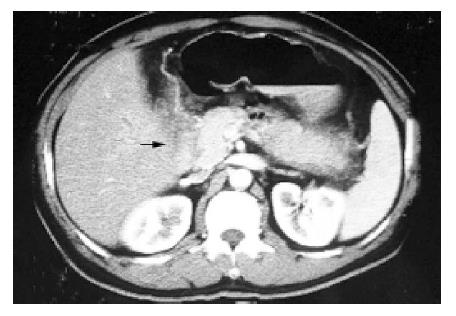 Bile duct decompression was performed by percutaneous transhepatic biliary drainage (PTBD), and the patient received combined EBRT and ILBT. A total of 40 Gy EBRT was given to the tumor bed in 20 divided fractions, which was followed by 10 Gy ILBT using iridium 192 (Ir192) wire. These radio-therapeutic procedures were not associated with any complication. A self-expandable metallic stent (Wallstent, Boston Scientific Ltd, USA) (Figure 3) was then inserted via the PTBD tract to bypass the stricture site, and the patency of the metallic stent lasted for 14 mo. Subsequently he required PTBD again when the metallic stent was blocked. 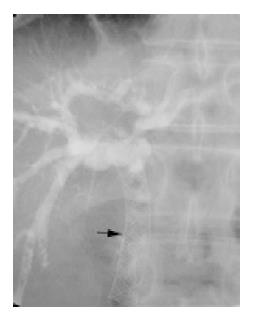 There was evidence of tumor regression on reassessment by CT scan in the first 2 years following the treatment (Figure 4). Subsequently there was slow disease progression with bile duct segregation and tumor infiltration to the second part of the duodenum. The patient relied on long-term PTBD for symptomatic control. Nevertheless, he has survived for more than 6 years since the initial diagnosis was made, and enjoyed a reasonable quality of life. He was able to work after the radiotherapy until the most recent 2 years of his disease course. At the time of writing the manuscript, the patient was still alive with satisfactory general condition. 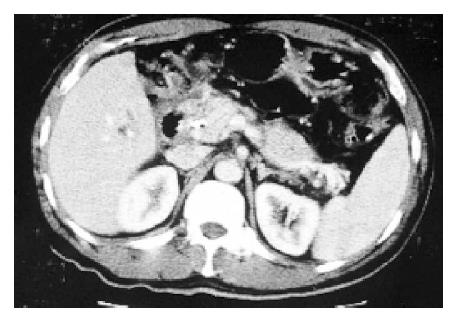 In spite of its low incidence, hilar cholangiocarcinoma is a deadly tumor because the diagnosis is commonly not made until the disease progresses to its advanced stage which is not amenable to curative resection. The median survival is less than 1 year if the tumor is unresectable[3,4,6,9]. The treatment options for unresectable advanced hilar cholangiocarcinoma are limited. Orthotopic liver transplantation has been proposed to be a curative treatment modality for locally advanced hilar tumors with no evidence of extrahepatic tumors. However, it could be offered only to patients with locally advanced unres-ectable tumors without widespread metastases. The reported medial survival is 25 mo[13] and 5-year survival ranges from 30% to 87%[6,14,15]. Hassoun et al[14], achieved a high 5-year survival of 87% by very careful patient selection including staging laparotomy. Nonetheless, the practice of this treatment option is largely limited by the lack of organ donors and the potential risk of tumor recurrence following immunosup-pressive therapy. For most patients with unresectable hilar cholangiocarcinoma, therapeutic efforts are mainly confined to palliation, which primarily involves relief and treatment of cholestasis. However, no palliative treatment is of proven value in prolonging survival.

Mortality of patients with hilar cholangiocarcinoma is usually caused by locoregional phenomena, as a result of liver failure secondary to bile duct obstruction, cholangitis, and sepsis. Bile duct decompression by endoscopic or radiological techniques is of paramount importance. This not only relieves patients’ symptoms such as itching and cholangitis, but also facilitates biliary access and recovery of hepatic parenchymal function. In addition, it makes further oncological treatments of the tumor possible[9]. In fact, ILBT is regarded to be beneficial as it improves bile drainage in patients with hilar cholangiocarcinoma[10]. In case of significant biliary obstruction, prior establishment of patency of the common duct is important for a successful delivery of ILBT. This can be achieved by self-expandable metallic stent insertion, either percutaneously or endoscopically via the duodenum[16,17]. ILBT prolongs the patency of the metallic stent, which has been reported to range from 6 to 8 mo[9,17]. This minimizes the chance of stent occlusion, and delays the use of external biliary drain, which is associated with significant psychological problems and physiological disturbances such as dehydration and electrolyte imbalance[17]. Our patient received ILBT before metallic stent insertion, and the patency of the stent lasted for 14 mo after brachytherapy.

With regard to ILBT, there is no randomized controlled study to prove its effectiveness in patients with hilar cholangi-ocarcinoma[18]. The number of patients studied was small in most of the series in the literature[10,11,19-23]. The medium survival after ILBT for extrahepatic cholangiocarcinoma has been reported to range from 4 to 13 mo[19-23]. With respect to hilar cholangiocarcinoma per se, the reported medium survival ranges from 11 to 14.5 mo[10,11] (Table 1). ILBT was initially planned as a boost, as part of a treatment regimen for patients with inoperable tumors. This treatment modality was first reported in 1979 by Zimmon et al[24]. In that study, the iridium wire source was placed through PTBD in four patients. The treatment duration lasted for 24-72 h. It provides symptomatic palliation and significant tumor control without exacerbation of cholestasis or infective complication. It is suggested that early ILBT after PTBD might extend palliation of jaundice due to its effect on the limitation of tumor extension. Ir192, with a half-life of 7 d, is the usual irradiation source for ILBT. The wire source can be put through PTBD or a nasobiliary catheter to reach the site of neoplastic stricture under fluoroscopic guidance. The wire can be placed across, parallel to or inside a stent. Au198 grains, with a shorter half-life of 2.7 d, have also been used for ILBT. It was found that the medical staff is better protected from radioactivity when the Au198 sources are withdrawn after brachytherapy[25].

The optimal irradiation dose and duration of brachyt-herapy are unknown. Our patient received a combination of 50-Gy external irradiation. The relationship between irradiation dosage and survival has been studied by Alden and Mohiuddin[26]. The patients with cholangiocarcinoma receiving high-dose combined brachytherapy and external beam radiation of more than 55 Gy showed significantly better survival than those who received smaller doses in unresectable cases. Among patients who received high-dose radiation, 48% of them experienced an extended 2-year survival. In another study, brachytherapy was given to five patients with Klatskin tumor for up to 5 d[27]. Two ribbons containing Ir192 seeds were threaded into the right and left percutaneous biliary drainage catheters in a “Y-shaped” configuration that corresponded well to the “Y-shaped” volume of the Klatskin tumor. Despite all these survival results, long-term survivors after radiation therapy for hilar cholangiocarcinoma, as in our case, have rarely been reported.

The procedure itself is not without risk. In the absence of any standardized protocol for brachytherapy, it is meaningless to compare the overall morbidity in different studies. The reported complication rate for cholangitis, which can be fatal, ranges from 6% to 30%[11,28,29]. Complications can be classified as those related to catheter introduction and those resulting from irradiation. There is an increased risk of bactobilia and bile duct perforation with either endoscopic or percutaneous biliary tract instrumentation. The wire source is introduced to the stricture site commonly via PTBD catheters, thus the potential risks are hemobilia, catheter dislodgement, superficial wound infection, liver abscess, and bile leakage. The complications related to ILBT itself are cholangitis and pancreatitis, as a result of blocked stent with biliary obstruction, as well as gastrointestinal tract upset with peptic ulcer or diarrhea[11,28].

There has been no report on the benefits of offering EBRT in advance to ILBT or vice versa. However, EBRT is given first in the majority of centers. This may be attributed to its effect on tumor shrinkage that prevents cholangitis during brachytherapy treatment. It is also questionable whether the addition of chemotherapy is beneficial to patients with inoperable Klatskin tumors. Basically, the use of chemotherapy is mainly limited to clinical trials. Nomura et al[30], reported a survival benefit in patients with unresectable extrahepatic bile duct cancer receiving brachytherapy combined with EBRT and repeated hepatic arterial infusion chemotherapy when compared with those receiving brachytherapy alone.

ILBT was intensely investigated 10 years ago, but it is still not commonly practiced nowadays. This case report showed that palliative combined EBRT and ILBT could be associated with long-term survival. Hence, it is worthwhile to reconsider its potential effect on local tumor control and possible survival benefits by proper randomized controlled trials. Hilar cholangiocarcinoma, once labeled as a dismal disease with poor outcome, can be associated with long-term survival as shown in our patient. In addition to improvement of life expectancy, the prolonging of symptom-free survival is an important target of the treatment as well.