We present a case of a 40-year-old woman with small-cell carcinoma (SCC) of the rectum. She had profuse bleeding in rectum for 5 d. By colonoscopy, polyps were determined in the rectum and biopsies were carried out. Histopathologically, the polyps were adenomatous. Because of the profuse bleeding in rectum, she underwent low anterior resection. After the diagnosis of SCC, she received intravenous chemotherapy with standard doses of siklofosfamid, adriamycin, and vepesid. Nevertheless, intracranial metastases were revealed and she died 6 mo after the operation.

Small-cell carcinomas (SCC) are malignancies derived from cells of the neuroendocrine system. Colorectal SCC is a rare tumor[1-5] and its incidence is less than 0.2% among all kinds of colorectal cancers[6] such as small-cell undifferentiated carcinoma, neuroendocrine carcinoma and stem cell carcinoma[7]. In some cases these tumors are in close association with adenomatous polyps[2,3,5,8]. Some of these tumors show glandular and squamous differentiation. The morphological heterogeneity of these tumors support that these tumors develop on divergent differentiation from pluripotential stem cells derived from the endoderm[9,10].

Small-cell neuroendocrine carcinoma is an aggressive neoplasm, which was reported to occur frequently with distant metastasis and carries a poor prognosis, even if diagnosed in the early stage[2]. Primary SCC showing neuroendocrine differentiation has been observed in many sites, including the upper airway and lung, skin, thymus, kidney, breast, ovary, uterus, urinary bladder, hepatobiliary tree, pancreas, salivary glands and alimentary tract[11,12]. Through the amine precursor uptake and decarboxylation system, neuroendocrine cells are capable of synthesizing, storing and secreting a variety of neuroamines, neuropeptides and related substances[12]. The gastrointestinal tract has the largest component of neuroendocrine cells, and neoplastic proliferation of these cells occurs primarily in the appendix, ileum and rectum[13].

The choice of treatment for these kinds of tumors is chemotherapy, which is used for SCC of the lung. Surgery plus chemotherapy is another alternative for small localized tumors[1,3].

A 40-year-old woman was admitted to Osmangazi University Hospital with the complaint of anorexia, 9 kg of weight loss over 2 mo and profuse bleeding in rectum for 5 d.

Abdominal tomography and ultrasonography revealed a large rectal mass consistent with neoplasm, multiple lesions probably due to metastasis in both right and left lobes of the liver and massive peri-aortic and peri-iliac enlarged lymph nodes. She was transfused 3 units of red blood cells. After preoperative bowel preparation for 3 d, laparotomy was performed. There were widespread liver metastases and lymphadenopathy in the abdomen and iliac region. Frozen rectal mass and liver lesions on the seventh segment were studied, the diagnosis of SCC was made and she underwent low anterior resection. Macroscopically, there was a sessile papillary lesion in the rectum indicating ulceration in the mid-portion. Cut section of the lesion revealed a solid tumor beneath the area of ulceration (Figure 1). Microscopically, surface epithelium was adenomatous and had villoglandular configuration, the solid tumor tissue extended through the entire bowel wall below the ulcer area and villous adenoma (Figure 2). Tumor infiltration was found in the surrounding fatty tissues as well. Tumor tissue was composed of solid sheets and partly trabecular structures of small round or oval undifferentiated cells with hyperchromatic nuclei and scanty cytoplasm. Nucleoli were not prominent. There was a focal peritheliomatous pattern produced by necrosis. Vascular invasion was determined. No transitional zone was observed between the adenoma and SCC. No histological features were suggestive of glandular or squamous elements. Immunohistochemical staining tumor demonstrated positive immunoreactivity with chromogranin A and synaptophysin. Neuron-specific enolase was negative in tumor cells. Tumor cells were negative for Grimelius’ argyrophilic reaction. Argyrophilic cells of mucosal crypts served as internal controls for the Grimelius stain. There were endocrine cells showing immunoreaction with chromogranin in adenomatous epithelium. Immunoreactivity with synaptophysin was not seen. In liver biopsy, SCC metastases were observed. 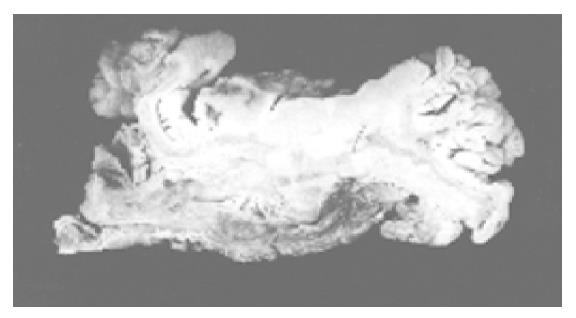 Figure 1 Solid tumor beneath the area of ulceration. 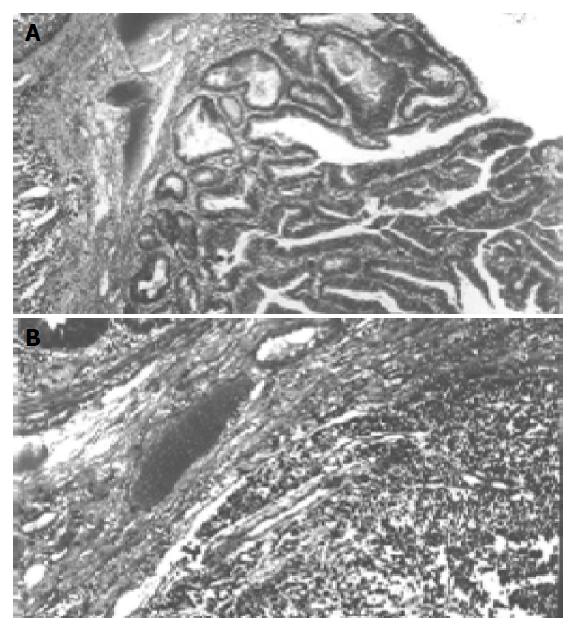 Figure 2 Solid tumor tissue below the ulcer area (A) and villous adenoma (B).

Computerized tomography scan and ultrasonography were performed 3 mo after operation and found an increasing metastatic focus in the liver. Thus, she was given intravenous chemotherapy with 800 mg/m2 of siklofosfamid, 50 mg/m2 of adriamycin and 120 mg/m2 vepesid on d 1-3. However, 6 mo after the surgery, her condition deteriorated rapidly with vomiting, headache and hemiparesis due to intracranial metastases and died.

SCC involving rectum is large and ulcerative[6] and tumors of the colorectum are frequently associated with adenomatous polyps[2,5,8,10]. In our case, tubulovillous adenoma overlay the solid tumor. Their association with adenomas suggests that SCC derives from stem cells or cells in a preexisting adenoma[5,7,9,15]. However, as in many cases[5,8], we did not observe the transition between two lesions. In pathogenesis, the likely mechanism of divergent differentiation of stem cells seems more acceptable.

These tumors have a high aggressive behavior[16,20], their 6-mo survival rate is 58% and 5-year survival rate is 6%[1,4,21]. Liver and lymph-node involvements are found in 70-80% of patients in their early evolution[21]. In our case, the patient had multiple metastases in both right and left lobes of the liver and massive periaortic and peri-iliac probably metastatic nodes.

Prognosis is favorable for some patients after radical surgery for these tumors. It is suggested that local control of SCC of the rectum can be achieved with multidrug chemotherapy and radiation therapy without radical surgery[22]. This tumor is as responsive to chemotherapy as is SCC of the lung[10]. Different results of therapy may be due to unusual examples of poorly differentiated small-cell malignancies. Electron microscopy may be helpful to confirm the diagnosis of poorly differentiated small-cell malignancies[22].

It has poor prognosis, even when the primary resection is radical[8]. Surgery should be performed only when the tumor is small and various non-surgical treatments should be given to patients with advanced disease[23].