AIM: To study the status of hMLH1 gene point mutations of gastric cancer kindreds and gastric cancer patients from northern China, and to find out gene mutation status in the population susceptible to gastric cancer.

METHODS: Blood samples of 120 members from five gastric cancer families, 56 sporadic gastric cancer patients and control individuals were collected. After DNA extraction, the mutations of exon 8 and exon 12 of hMLH1 gene were investigated by PCR-SSCP-CE, followed by DNA sequencing.

CONCLUSION: The members of gastric cancer families from northern China may have similar genetic background of hMLH1 gene mutation as those of hereditary nonpolyposis colorectal carcinoma.

Gastric cancer is one of the most common cancers and a leading cause of cancer death in China. Although the molecular biological mechanism involved in the gastric tumorigenesis remains unclear, clinical and epidemic studies have shown that gastric cancer occurrence has a tendency of familial accumulation. Several members can be attacked by gastric cancer just in one family. Moreover, the younger generations of these families are found to develop colorectal cancer at a high frequency in recent years because of the change of food habit. So we imagine that individuals susceptible to gastric cancer may have the similar genetic background as those of colorectal cancer. Hereditary nonpolyposis colorectal carcinoma (HNPCC) is a kind of colorectal cancer that has been well studied[1,2]. One of the reasons why HNPCC emerges is germline mutation in mismatch repair genes[3,4], most commonly in hMLH1 (human MutL homolog1) and hMSH2 (human MutS homolog2)[5]. Therefore, we selected the hot mutant sequences exon 8 and exon 12 of hMLH1 gene to detect gene mutation status in the population susceptible to gastric cancer.

Peripheral blood samples of 120 members in five gastric cancer families, 56 sporadic gastric cancer patients and control individuals were collected from the southern district of Liaoning Province, northeast of China. All blood samples were stored at -20 °C until used. Of the 120 familial samples, 16 were from gastric cancer patients (all were adenocarcinomas) aged 36-58 years, nine male and seven female and 104 were from non-cancerous members aged 9-70 years, 59 male and 45 female. All the five gastric cancer families met the following standards: three or more cases were affected by gastric cancer in two successive generations, two or more of them were first-degree relatives and at least one diagnosed to have had gastric cancer before the age of 50, whereas there was no first-degree relative affected by gastric cancer in those sporadic patients (all were adenocarcinomas) aged 42-64 years, 36 male and 20 female and healthy controls aged 18-60 years, 60 male and 40 female.

Primer sequences used were as follows: for exon 8, 5’-AM-ACAGACTTTGCTACCAGGACTTG-3’ (Forward) and 5’-FAM-TGTCTTATCCTCTGTGACAATGG-3’ (Reverse) and for exon 12, 5’-FAM-CTCAGCCATGAGAC-AATAAATCC-3’ (Forward) and 5’-FAM-GGTTCCCAAA-TAATGTGATGG-3’ (Reverse). Fluorescence-labeled primers and PCR amplification kits were obtained from TaKaRa Biotechnology (Dalian, China). The reaction mixture contained 10 mmol/L Tris-HCl (pH 9.0), 50 mmol/L KCl, 1.5 mmol/L MgCl2, 200 µmol/L dNTPs, 1 mmol/L each primer, 100-200 ng of the extracted genomic DNA and 1.25 U Taq DNA polymerase in a total volume of 25 µL. PCR was performed with a Perkin-Elmer Model 2700 PCR system (Foster City, CA, USA) with the following polymerase chain reaction (PCR) program: initial denaturation at 94 °C for 5 min, followed by 35 cycles of denaturation at 94 °C for 40 s, annealing at 55 °C for 40 s, extension at 72 °C for 1 min, and a final elongation step at 72 °C for 5 min.

Single-strand conformation polymorphism (SSCP) of DNA was analyzed by the method of capillary electrophoresis (CE). A P/ACE MDQ capillary electrophoresis instrument (Beckman, Palo Alto, CA, USA) with argon ion LIF detector (λex = 488 nm, λem = 520 nm) was employed. The capillary was coated with linear polyacrylamide with an inner diameter of 75 µm and an effective length of 30 cm. Prior to electrophoresis, the PCR products were diluted 20-folds with water, and heated at 95 °C for 10 min, then immediately put into ice water and kept for 5 min. The samples were injected at reverse polarity of 5 kV for 5 s, and separation was carried out under constant voltage. Single-strand DNA fragments were detected by LIF detector and the data were collected and analyzed by MDQ software.

The samples suspected to be mutant by CE-SSCP were sequenced. The PCR for sequencing was performed using nonfluorescent forward primer and the Big Dye terminator cycle sequencing ready reaction kit (Perkin-Elmer, ABI Prism) under the following conditions: initial denaturation at 96 °C for 2 min, 25 cycles at 96 °C for 10 s, annealing at 50 °C for 5 s, extension at 60 °C for 2 min, and a final elongation step at 60 °C for 7 min, in a 2700 thermal cycler (Perkin-Elmer). The products were purified by an ethanol/NaAc method, and then CE-sequencing was conducted using ABI Prism 310 (Perkin-Elmer, ABI Prism). 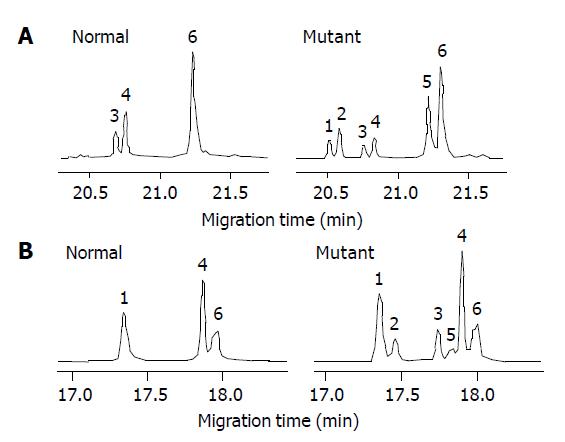 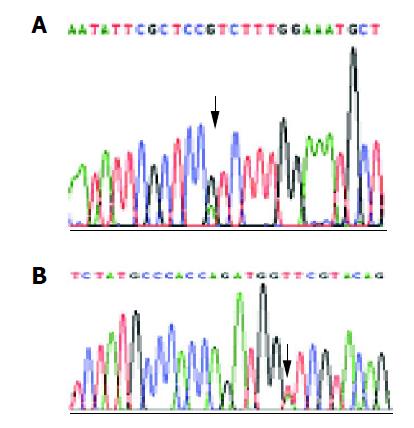 Figure 2 Electrophorogram section of CE-sequencing of hMLH1 gene exon 8 (A) and exon 12 (B). Arrow: substitution of A-G (A) and T-A (B).
DISCUSSION

Mismatch repair (MMR) plays a central role in maintaining genomic stability by repairing DNA replication errors and inhibiting recombination between non-identical sequences[7,8]. Loss of mismatch repair causes destabilization of the genome and results in high mutation frequency[9]. HMLH1 gene is a prominent component in the human mismatch repair system and its dysfunction is involved in a number of patients with HNPCC[10,11]. It has been reported that germline mutations of MMR are identified in nearly 80% of the patients with HNPCC and almost 60% of the mutations are in hMLH1[5].

According to statistics, about 8-10% of gastric cancer cases are related to an inherited familial genetic factor[12]. Up to 3-fold increases in risk for gastric cancer among relatives of gastric cancer patients are consistent[13]. The gene background of gastric cancer susceptibility is not sufficiently known to us, especially in China, although the hereditary tendency is even higher.