AIM: To investigate the viral and host causes of fatty liver in chronic hepatitis B patients and the role of fat deposits in liver damage.

CONCLUSION: Steatosis in chronic hepatitis B appears to be a result of metabolic factors of the host rather than the effect of viruses. Steatosis is unrelated to the HAI and degree of fibrosis, which are considered as the histological indicators of liver damage.

Hepatosteatosis is defined as fat deposition in the liver that exceeds 5% of the total weight of liver, or with more than 5% of hepatocytes containing fat deposits under light microscopic examination[1]. It occurs under several disease states. The most common causes are alcohol, metabolic diseases, drugs, and nutritional disorders.

In this study, whether the cause of fatty liver in chronic hepatitis B patients who received no previous treatment is due to viral or host factors and the role of fat deposition in liver damage were investigated.

The study included 164 patients in 1997-2002 with the diagnosis of chronic hepatitis B (positive for HBsAg, elevated transaminase levels for at least 6 mo, and histopathological findings) who received no antiviral treatment. The following patients were excluded from the study. Those receiving antiviral treatment before the study, those on hepatotoxic drug treatment, those consuming alcohol regularly or excessively, those diagnosed of cirrhosis, anti-HCV or anti-Delta positive patients, those diagnosed as having autoimmune or other metabolic liver diseases. The height and weight of all patients were determined and the body mass index (BMI) was calculated. Based on the BMI, the patients were classified as normal (BMI = 18.5-24.9), over weight (BMI = 25-29.9), obese (BMI = 30-34.9), or extremely obese (BMI = 35-39.9). Liver function, blood glucose, cholesterol and triglyceride levels of each patient were also determined. For each patient HBsAg, HBeAg (Abbot Laboratories, North Chicago, IL, USA) were measured and HBV DNA was determined by PCR (Amplicor, Roche). The viral load was measured by hybridization (Hybrid Capture Assay, Digene, USA) in 122 patients.

Liver biopsy was performed on each patient. Determination of the histological activity index (HAI) and staging of the biopsy materials were done according to the Knodell’s classification[8]. HAI was scored as portal inflammation (0-4), lobular degeneration (0-4), and periportal necrosis (0-10). According to the degree of fibrosis, staging was made from 0 to 4 (0: no fibrosis, I: mild, II: moderate, III: severe, IV: cirrhosis). In the classification of steatosis less than 5% was considered normal, 5-25% as mild, greater than 25% as severe fat deposition.

Kruskall-Wallis variance analysis, Mann-Whitney U tests and the χ2 tests were performed.

The 164 chronic hepatitis B patients included in the study were subdivided into group with and without steatosis according to the findings of the liver biopsy materials. One hundred patients had no steatosis, while 64 had steatosis. Fifty-one of the patients were females and 113 were males. The mean age was 35±11.3 years (range 10-62 years). Eleven of female patients (22%) and 53 (46.9%) of the male patients were found to have steatosis. The difference was statistically significant (χ2: 9.67; P<0.05). 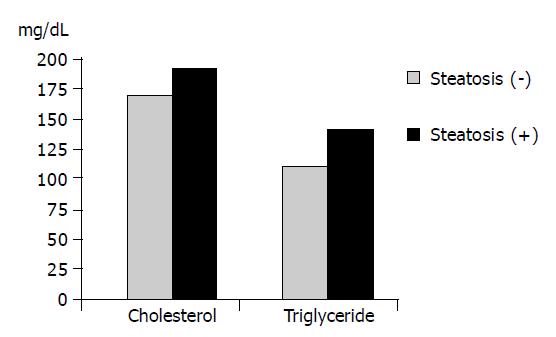 Figure 1 Comparison of cholesterol and triglyceride levels of groups with and without steatosis (P<0. 05). 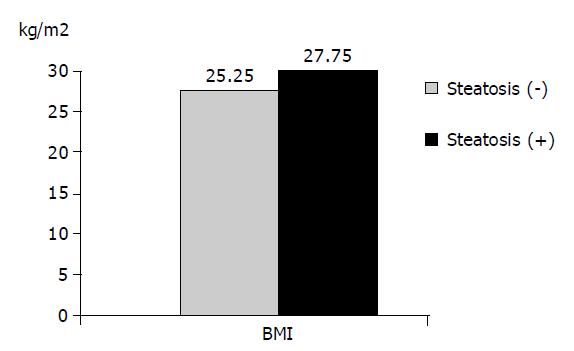 Figure 2 Comparison of BMI of groups with and without steatosis (P<0. 05).

The presence of diabetes mellitus or a history of alcohol was considered as a risk factor in the patients. Based on this, 23 patients were found to carry the risk factor, 141 patients did not carry this risk.

In our study genotyping of the virus could not be conducted due to the combined economic constraints, inadequate laboratory facilities and the fact that this procedure was not yet done routinely. It has been reported that chronic hepatitis C steatosis is associated with some HCV genotypes[2]. There could have been the chance of defining some of the viruses as exhibiting “steatoviruses” based on genotyping.

Steatosis often occurs in some conditions and diseases such as obesity, hyperlipidemia, alcohol consumption and diabetes mellitus. In this study, steatosis was found to be associated with obesity and hyperlipidemia. The BMI was the only factor that was related to the degree of steatosis in a linear fashion. Whereas in some studies this linear relationship between the BMI and degree of steatosis was mentioned[13], other studies showed the opposite[14]. On this issue, the distribution of body fat rather than the quantity should be the determinant[15]. This might explain why steatosis was observed to be associated with the male gender in this study. It has been reported that steatosis is highly associated with the female gender[13,16]. Some recent studies describe equal rates[17]. In our study, the observation that steatosis showed an increase with advancing age is in agreement with what was reported in literature[18].

In conclusion, steatosis in chronic hepatitis B seems to be a result of metabolic causes attributable to the host rather than the effect of the viruses.