AIM: An inherited deficiency of human lysosomal acid lipase (LAL) results in the rare conditions of Wolman disease and cholesteryl ester storage disease (CESD). We want to present the rare case of CESD in an adult.

METHODS: We report about an adult female patient with severe chronic diarrhea and weight loss as a consequence of CESD. Clinical examination revealed signs of malabsorption and slightly elevated liver enzymes.

RESULTS: Histopathologic changes in the liver tissue and DNA sequence analysis confirmed the diagnosis of CESD due to homozygosity for the most common CESD mutation, a G934A splice site defect encoded by exon 8 of the lysosomal acid lipase (LIPA) gene.

CONCLUSION: It is the first case in the literature with diarrhea as a putative symptom of CESD in adult patients.

LAL is essential for the intralysosomal breakdown of cholesteryl esters and triglycerides which are taken up by receptor-mediated endocytosis. An inherited deficiency or low activity results in the intralysosomal storage of the respective lipid substrates. As the enzyme is synthesized by all nucleated cells, lipid-laden cells are found in all organs, particularly in liver, spleen, the adrenal and the hemopoietic system, and in the intestine as well as in the lymph nodes, lungs, testes, and ovaries[5-8].

While Wolman disease has an infaust prognosis and leads to hydrops fetalis and congenital ascites as well as an abnormal neurological development, CESD presents as the milder form due to a residual enzymatic activity of approximately 3% which results in widespread lipid deposition and can induce symptoms at any age[9-13].

CESD is rarely diagnosed. We report about the unusual case of a 41-year-old woman who had been suffering from recurrent diarrhea since early childhood and was referred to the hospital during a severe episode of diarrhea and ensuing weight loss. During the clinical examination, a liver biopsy was taken which led to the tentative diagnosis of CESD. This was confirmed by molecular genetic analysis.

A 41-year-old female patient, who had been brought up as a foster-child, was referred to the hospital because of persistent chronic diarrhea which caused deterioration by inducing a weight loss of 10 kg in the last 5 mo (body weight 44 kg, height 168 cm at the time of hospital admission). Clinical examination revealed a reduced level of lipid-soluble vitamins as well as a pathologic lactose tolerance. Abdominal ultrasound showed edema of the small bowel mucosa. Celiac disease was excluded by normal antibody levels against endomysium, tissue-transglutaminase, and gliadin. Other causes of diarrhea-like infection or laxative abuse were exclu-ded as well. The patient had elevated liver enzymes (AST 47 U/L, ALT 57 U/L). There were, however, no signs of a viral hepatitis (HbsAg- and anti-HBc-). Immunoglobulin values were also normal. In order to find a cause for the raised liver enzymes and the diarrhea, biopsies of liver and small intestines were taken.

Light-microscopy in liver showed an increase of Kupffer cells and macrophages which were found within the sinusoids as well as in the portal tracts. The macrophages were conspicuous with the cytoplasmatic storage of foamy, tan-colored, PAS-positive material. In immunohistochemistry, the described cell population expressed the macrophage-specific marker CD68. The distribution of the CD68-positive population was abundant over the whole acinus without zonal accentuation. Additionally, a discrete parenchymal inflammatory activity with single apoptotic bodies as well as a fine vesicular steatosis in about 40% of the hepatocytes. A discrete pericellular fibrosis was seen in the reticulin stain (Figure 1). 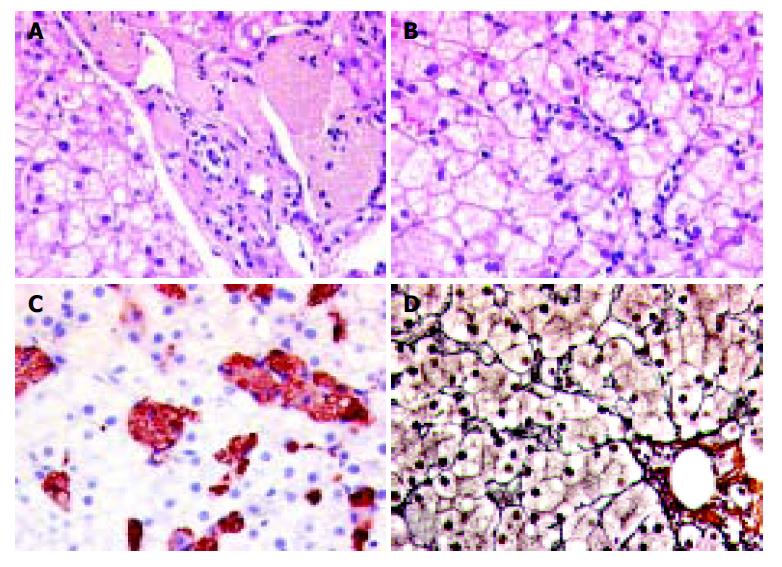 Figure 1 Light microscopic findings in the liver. A: A tan-colored foamy material is seen in conspicuous macrophages next to and in a portal tract. HE stain ×400. B: Part of an acinus with a prominent intrasinusoidal cellular infiltration and a microvesicular steatosis of hepatocytes. HE stain (×400). C: An immunohistochemical staining with CD68 positive macrophages laden with the foamy material. D: Reticulin stain (×400). No remarkable fibrosis.

The small bowel biopsies revealed single macrophages with cytoplasmatic storage of PAS-positive foamy, tan-colored material within the apical part of the villi in the lamina submucosa (Figure 2). Ultrastructural examination demonstrated lysosomal lipid storage in the cytoplasm of hepatocytes and macrophages as well as the presence of single cholesteryl ester crystals (Figure 3). 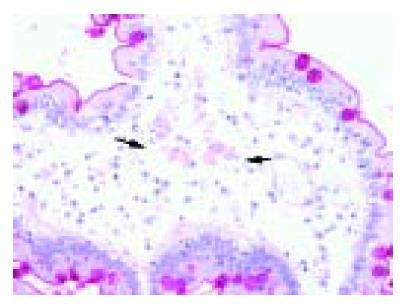 Figure 2 Small bowel biopsy reveals single macrophages with cytoplasmatic storage of PAS-positive foamy, tan-colored material within the apical part of the villi in the lamina submucosa. A PAS stain is demonstrated with PAS-positive macrophages between the arrows (cd) (×400). 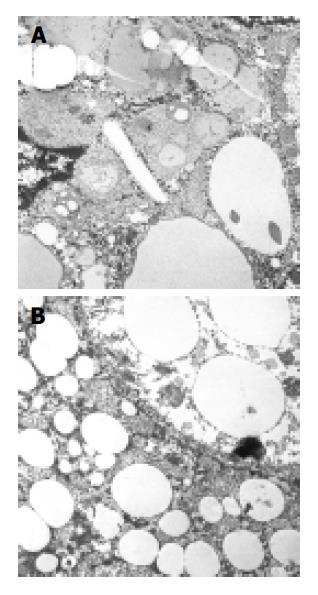 Overall, the histopathologic changes in the liver biopsy were suggestive of CESD. Therefore, a DNA sequence analysis of the proband’s LIPA gene was performed. The patient was found to be a homozygous carrier of the most common CESD mutation, a G934A exchange affecting the last coding base of exon 8, thereby confirming the diagnosis. This genetic defect results in the skipping of exon 8 from the mRNA transcript and in the loss of the internal amino acids 254-277 from the mature enzyme. Despite the presence of the mutation, approximately 3% of normal splicing occurs, which ensures survival of the affected individual[1,3].

We present the unusual case of CESD in an adult woman. CESD is a rare condition, which is usually diagnosed during the first or second decade of life due to the accompanying hepatomegaly, often in combination with hyperchol-esterolemia, but only seldom in later adulthood[7]. Although there is no specific treatment, alleviation can be induced by 3-hydroxy-3-methylglutaryl coenzyme A (HMG CoA) reductase inhibitors such as lovostatin[14-16]. In case of liver cirrhosis, a liver transplantation is indicated[17-19].

The clinical symptoms of our patient, who suffered from severe diarrhea and weight loss, represent a remarkable difference from the typical disease pattern of CESD which normally shows a liver symptomatology with early progression toward cirrhosis[1]. The patient reported about chronic diarrhea with the onset during early childhood, so that CESD seems to play a causal role. Accordingly, laboratory findings showed a reduced level of lipid-soluble vitamins as a sign of chronic malabsorption. The liver symptomatology, in contrast, was discrete. A liver biopsy was taken because of slightly elevated liver enzymes of unknown etiology. Histopathologic changes in the liver were characteristic for CESD, however, a substantial fibrosis had not developed which is reflected by the laboratory findings. This is especially remarkable, because of the long time-period of disease symptoms, and in comparison with other reported cases, where severe fibrosis has been reported to be present as early as childhood[20].

DNA sequence analysis revealed homozygosity for a G934A mutation in exon 8 of the LIPA gene. This nucleotide substitution results in exon skipping and the subsequent loss of 24 amino acids from the mature enzyme. It is the most frequent genetic defect seen in CESD so that the mutation does not explain the unusual clinical presentation[3].

In conclusion, CESD is a very rare metabolic error and presents with an impressing variety of clinical symptoms which make it difficult to establish the correct diagnosis. The patient reported here is the first case in the literature with CESD and chronic diarrhea as the putative symptom of CESD. We therefore conclude that CESD should be taken into account in the differential diagnosis of chronic diarrhea when other causes for diarrhea have been excluded.