Melanoma of the gastrointestinal tract is a rare, highly malignant neoplasm of poor prognosis. This is description of an unusual case of surgically treated patient with two metachronous malignant melanomas of the stomach and the esophagus. The former lesion was located in the cardia and effectively treated with R0 total gastrectomy. The latter was recognized after 67 mo and appeared as irregular, flat, pigmented areas located in the mid esophagus. Subtotal esophagectomy via right-sided thoracotomy, laparotomy and left-sided cervicotomy was performed, but neoplastic cells were found in distal margin (R1). Fourteen months after esophagectomy multiple lung metastases were detected. Patient died 2 mo later.

Melanoma is highly malignant neoplasm with an unpredictable course. Primary melanomas of the esophagus and stomach are rare[1-9] comparing to more common metastases of melanomas from other locations especially skin[10]. The esophageal melanomas account for 0.1-0.2% of all primary tumors of this organ. This location is estimated in 2% of all cases of alimentary tract melanoma [4-6]. About 238 cases of primary esophageal melanomas were published in the literature so far, but only few cases of primary stomach location[11,12,16-19].

This description is of an unusual case of surgically treated patient with long survival with two metachronous malignant melanomas of the stomach and esophagus. In available literature no similar study is found.

A 56-year-old man was admitted to General Surgery Department of Skubiszewski Medical University of Lublin in March 1997 due to three-month history of epigastric pain, periodical vomiting with admixture of blood and the loss of body weight about 5 kg. Either family history or exposition to environmental toxic factors were not significant. Physical examination did not reveal any abnormalities. Barium swallow and endoscopic examination demonstrated ulcerated tumour located in the cardia. The biopsy specimens taken from the tumor revealed small neoplastic cells with scanty dark brown pigment that exhibited positive immunostaining for HMB-45 and negative for cytokeratin and CD45. The appropriate negative and positive controls were routinely performed and the diagnosis of malignant melanoma was established. 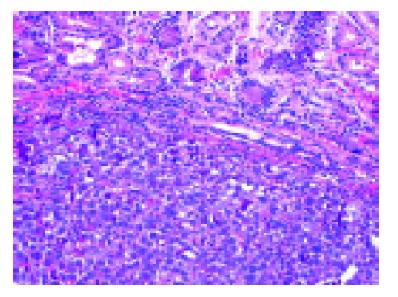 After 67 mo period, on 21 October 2002, the patient was admitted to our Department due to mild dysphagia. Endoscopic examination demonstrated three irregular, flat, pigmented areas located at 25, 32 and 37 cm from incisors (Figure 2) as well as a single, slightly elevated nonulcerated lesion - 0.7 cm in diameter - at 25 cm from incisors. Esophagojejunal anastomosis was wide with a smooth surface. The biopsy specimens taken from the lesions contained only stratified squamous epithelium with a few scattered cells with fine brown pigment that exhibited positive immunostaining for HMB-45. The computer tomography showed a thickened esophageal wall above the esophagojejunal junction, but neither enlargement of lymph nodes nor distant metastases were demonstrated. 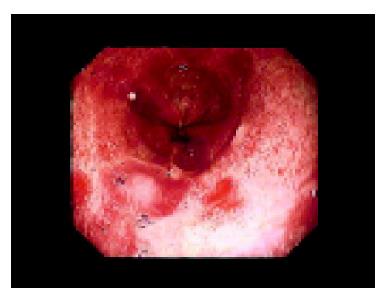 On 29 November 2002 the subtotal esophagectomy via right-sided thoracotomy, laparotomy and left-sided cervicotomy was performed. The esophageal substitute was formed with a left colon supported by middle colic artery and placed in retrosternal channel in antiperistaltic arrangement. Gross examination of 11 cm-length segment of esophagus confirmed coexistence of three flat and single elevated brownish lesions. In microscopic examination, the formers corresponded to lentiginous pattern of atypical melanocytes proliferation whereas the letter to malignant melanoma infiltrating mucosa and superficial part of submucosa (Figure 3). The diagnosis was confirmed by immunostaining (Figure 4). Scattered morphologically normal melanocytes were found in basal layer of the surface epithelium. Nineteen resected lymph nodes were free of metastases. The radicality of surgical procedure was estimated as R1 due to in situ melanoma found in distal margin. 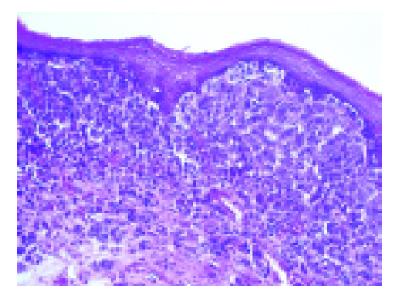 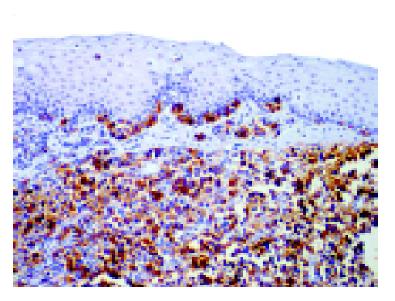 The clinical course was complicated by intestinal fistula. The esophageal substitute was resected and the ileostomy was done. Two months later favorable results of CT and ultrasonography as well as better general conditions of the patient permitted on alimentary tract reconstruction. On 8 April 2003 izoperistaltic esophageal substitute was formed with the right colon supplied by middle colic artery by laparotomy. The cervical esophagus was anastomosed with the terminal small intestine and the large intestine was joined in the upper abdomen with previously formed reservoir from small intestine. Clinical course was uneventful and the patient was discharged 12 d after surgery.

In January 2004 the CT examination demonstrated numerous metastases in both lungs. The patient died 14 mo after subtotal esophagectomy and 2 mo after detection of lung metastases. Autopsy was not performed.

The primary melanoma of esophagus and stomach is a rare neoplasm. Some authors consider the esophageal and gastric melanomas to originate from the ectopic melanocytes, which emigrate to the digestive tract during embriogenesis[3,21]. This concept is supported by the presence of melanocytes in mucosa of the digestive tract, mainly the rectum, which was confirmed by immunohistochemical staining[20]. So-called melanosis or melanocytosis, and atypical junctional melanocyte proliferation are also reported in esophageal mucosa[15,21,22]. These lesions are observed in 25% cases of esophageal melanomas and are thought to be precursor lesions[4,5]. Due to the absence of benign melanocytes in a normal gastric mucosa, a few reports of primary gastric melanoma are questioned[17-19]. In the case presented, we revealed scattered melanocytes and proliferation of atypical melanocytes only within esophageal epithelium. However, the gastric mucosa was free of benign melanocytes both in routine staining and immunostaining (HMB-45). Locations of primary melanoma outside the gastrointestinal tract were excluded. Based on these findings as well as early stage of esophageal tumor at the time of its diagnosis (T1N0) and relatively long time between the diagnosis of gastric and esophageal tumors (67 mo) we recognized them as two metachronous primary melanomas, although the possibility that esophageal lesion was intramural metastasis of early invasive gastric melanoma could not be excluded.

The clinical symptoms of upper digestive system melanoma are not specific and similar to other tumors of this region, which result in loss of body weight, anemia or dysphagia. Malignant melanomas spread quickly by invading esophageal or gastric wall but also via lymphatic and blood vessels[11]. At the time of diagnosis 50% of patients have distal metastases, mainly in the liver (31%), mediastinal lymph nodes (29%) and the lungs (18%)[11,12]. In our case, lung metastases were detected 12 mo after the esophagectomy. Regardless of the stage of the esophageal melanoma the prognosis always remains poor. For this melanoma the best treatment was surgery with esophagectomy as best procedure due to deep submucosal infiltration[6,8]. However, surgical treatments are regarded as a palliative therapy with a small effectiveness[12-15]. The advantages of chemo-, immuno- or radiotherapy of esophageal or gastric melanomas are also not too effective and these methods are not routinely used. The expectations for treatment of metastases and recurrent melanoma have yet to be reached.

The survival period of our patient was unusually long - he survived 7 years after the gastrectomy and 15 mo after the esophagectomy. Available case and series reports do not give any precise evidence regarding survival of the patients with primary gastric melanoma. According to literature regarding survival after diagnosis of esophageal melanoma treated by esophagectomy the results are similar to ours: 9-12 mo[11]. Rarely the survival after radical R0 esophagectomy is reported to be longer than 5 years[12]. We conclude that this topic needs more attention than has been given and hopefully in future the expectations for treatment of metastases and recurrent melanoma will be reached.