Colorectal cancer (CRC) is a predominant disease in the western world, after lung cancer in men and breast cancer in women, and CRC is the most common cause of cancer-related death. The peak incidence of CRC was in the seventh decade of the 20th century and it is fairly equally distributed between men and women[1]. Both development and progression of malignancies occur as a multistep process, requiring the activation of oncogenes and the inactivation of several tumor suppressor genes[2]. The loss of heterozygosity (LOH) of tumor suppressor genes is believed to be one of the key steps to carcinogenesis of CRC. LOH, the loss of one allele at a specific locus, is caused by a deletion mutation or loss of a chromosome from a chromosome pair. When this occurs at a tumor suppressor gene locus where one of the alleles is already abnormal, it can result in neoplastic transformation. In CRCs, frequent allelic loss has been identified in chromosome 5q (30%), 8p (40%), 17p (75-80%), 18q (80%) and 22q (20-30%)[3]. Indeed, much has been published on tumor suppressor genes APC, p53, and DCC, which have been localized to chromosome 5q, 17p and 18q, respectively. Recently, new tumor suppressor genes, such as PTEN (10q23), FHIT (3p14), Smad4 (18q), have been found. The LOH analysis became an effective way to find informative loci and then to find candidate tumor suppressor genes. In an attempt to integrally investigate the loss of tumor suppressor genes and search for putative suppressor loci associated with tumor occurrence and progression, we have conducted a genome-wide LOH study of 83 tumor samples obtained from Chinese patients with sporadic CRC. We found that LOH frequency was higher than 35% in over 30 loci[4]. In this study, we analyzed the LOH of seven loci on chromosome 22q13 (encompassing D22S274 locus) of sporadic CRC in an effort to identify additional loci involved in colorectal tumorigenesis.

This study was based on 83 consecutively collected tumors, including 40 males and 43 females, from unrelated patients with CRC, treated at the surgical department in Shanghai No. 1 People’s Hospital, China, between 1998 and 1999. The patients’ ages ranged from 31 to 84 years with a median of 66 years. The cancerous tissue and adjacent normal tissue were frozen freshly. These tissues were cut into cubes of approximately 2 mm3 and immediately frozen in liquid nitrogen. DNA was extracted using standard methods with proteinase K digestion and phenol/chloroform purification. All patients were confirmed by pathology, and were staged by Duke’s criterion. Each patient was given his or her informed consent for the use of his or her tissues in this study.

Seven fluorescence-labeled primers for polymorphic microsatellite markers (Shanghai Biological Technology Ltd, China), flanked on each side on D22S274 locus (Figure 1), were used to analyze matched pairs of normal and tumor DNA for LOH analysis. The sequence of markers was pter-D22S115-D22S1171-D22S114-D22S274-D22D1141-D22S1160-D22S1149-D22S1170-qter. The relative position was from the Genothon human genetic linkage map[5]. 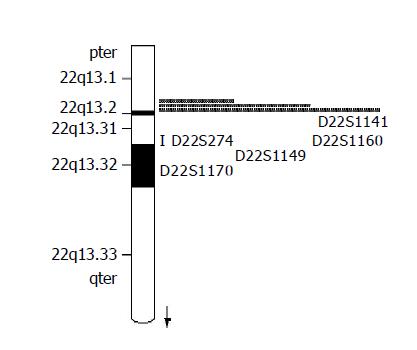 A portion of each PCR product (0.5 µL) was combined with 0.1 µL of Genescan 500 size standard (PE Applied Biosystems) and 0.9 µL of formamide loading buffer. After denaturation at 96 °C for 5 min, products were eletrophoresed on a 5% polyacrylamide gel on an ABI 377 DNA sequencer (PE Applied Biosystems) for 3 h. Genotyper 2.1 software displays individual gel lanes as electropherograms with a given size, height and area for each detected fluorescent peak. Stringent criteria were used to score the samples. Alleles were defined as the two highest peaks within the expected size range. A ratio of T1:T2/N1:N2 of less than 0.67 or greater than 1.50 was scored as a LOH (Figure 2). Most amplification of normal DNA produced two PCR products indicating heterozygosity. A single fragment amplified from normal DNA (homozygosity) and those PCR reactions, in which fragments were not clearly amplified, were scored as not informative. The LOH frequency of a locus is equal to the ratio of the number between allelic loss and informative cases. The average LOH frequency of chromosome 22 long arm is the average value of each locus LOH frequency. 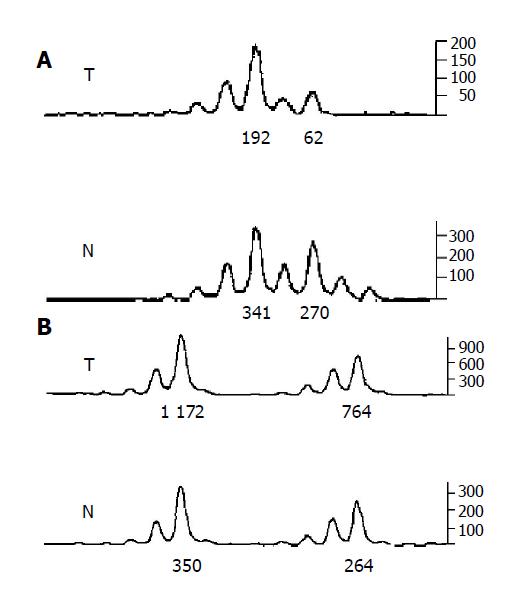 Comparisons between LOH and clinicopathological data were performed by χ2 test. P<0.05 was considered as statistically significant.

Relationship of clinicopathological features and LOH on 22q13

During tumorigenesis, loss of the wild-type allele is frequently observed at the appropriate locus. It was widely accepted that LOH on tumor suppressor genes played a key role in CRC transformation. LOH analysis of sporadic CRC can promote the discovery of unknown tumor suppressor genes[6,7]. Allelic loss on chromosome 22q is present not only in CRC but also in oral (40%)[6], brain (40%)[7], ovarian (55%)[8], breast (40%)[9], pancreatic endocrine tumor (30%)[10], gastrointestinal stromal tumor (77%)[11], and even hepatocellular carcinoma[12]. After microsatellite DNA analysis, several attempts were made to identify a region of deletion and eventually the tumor suppressor gene(s) responsible for these neoplasms. Allelic deletions were restricted to D22S274 (22q13) marker in oral squamous cell carcinoma[6].

We have made the LOH analysis on the long arm of chromosome 22 in the previous report[13] in CRC research, and found that there was a relatively high LOH frequency (34.04%) on D22S274 locus. In order to detect unknown tumor suppressor genes on this region, in this study, LOH scanning was carried out in 83 sporadic CRC samples with eight high-density polymorphic markers lying on each side on D22S274 locus (the average hereditary distance, 1.9 cm). By Genotyper software, i.e., by the ratio of the fluorescence intensity of allele, we hope to identify additional high-deletion loci involved in colorectal tumorigenesis and progression.

LOH on D22S1171 locus was associated with tumor location, i.e., distal large intestinal cancers are prone to cause LOH than proximal cancers (P = 0.020). Zhou et al[10], found the same phenomenon on D22S274 locus. By the same result, it may be inferred that distal CRC reveals a different mechanism on tumorigenesis. Now, it is admitted that the mechanism of carcinogenesis in distal colon was different from that in proximal one[17-19]. And the mechanism in rectal cancer was also different from that in the proximal colon[20]. Distal colon cancer displayed a higher frequency of 17p and 18q allelic loss, p53 accumulation[21], c-myc expression and aneuploidy[22]. Right-sided tumors are more often diploid[23] and of the microsatellite instability (MSI) phenotype. We can conclude that LOH (17p, 18q) plays an important role in the formation of distal CRC.

We scanned GeneMap’ 99 database, and found that no known gene exists in these regions. Castells et al[14], also have not found known gene between D22S1171 and D22S298 locus in colorectal and breast cancer. The completion of the chromosome 22q sequencing project permitted the prediction of unknown genes using computer-based approaches. Following this strategy, the Sanger Center predicted the existence of eight genes and four pseudogenes between D22S1171 and D22S298 locus[23]. Castells and his colleague made further study and identified several DNA variants that are not compatible with pathogenic mutation. Accordingly, PARVG genes were excluded as tumor suppressor gene on 22q13 involved in CRC and breast cancer development and progression[24]. With the cloning of new genes and further function recognizing of known genes, new foundation will be achieved on 22q13.

In summary, by detailed deletion mapping, we detected two obvious LOH deletion regions, one between markers D22S1171 and D22S274 (22q13.31), the other flanked by markers D22S1160 and D22S1149, about 2.7 and 1.8 cm, respectively. These regions may harbor candidate tumor suppressor gene related to tumorigenesis and progression in CRC. Our study provided the significant data to reveal the mechanism of colorectal carcinogenesis. And further LOH scanning with high-density microsatellite markers and selected genes mutant and methylation analysis in the region may provide much more genetic and epigenetic information and find the potential tumor suppressor genes.