CONCLUSION: RTP may have cytoprotective and anti-oxidant effects against H2O2-induced intestinal epithelial cell injury by inhibiting cell apoptosis and necrosis. This might be one of the possible mechanisms of RTP for the treatment of ulcerative colitis in rats.

Intestinal epithelium acts as a gateway that allows absorption of dietary nutrients and restricts uncontrolled entry of luminal antigens. This selective barrier function is critical for maintaining mucosal immune homeostasis, as evidenced in intestinal inflammation associated with loss of epithelial integrity[1].

Epithelial apoptosis, in the gastrointestinal tract, is normally restricted to superficial cells, but in pathological states of inflammation or infection, apoptotic cell death can be far more expansive[2]. Mucosal lesion in inflammatory bowel disease (IBD) is characterized by dense inflammatory cell infiltrate mainly comprised of neutrophils, macrophages and lymphocytes. Although many inflammatory mediators secreted by these cells, including cytokines IL-1, IL-6, IL-8, IL-10, TNF-α and leukotrienes together with luminal bacterial products such as bacterial lipopolysaccharide (LPS) and chemotactic peptide fMLP, have been implicated in the mucosal injury observed in IBD[3], and the molecules that mediate tissue damage remain poorly understood[4-7]. Recent indirect evidence has, however, implicated reactive oxygen and nitrogen species (RONS) such as nitric oxide (NO), superoxide (O2-), peroxynitrite (ONOO-), hydrogen peroxide (H2O2), and hypochlorite (OCl-) in the pathogenesis of mucosal lesion[8-11].

Rheum tanguticum Maxim ex Balf is a well-known traditional Chinese medicine especially for the treatment of gastrointestinal diseases. Polysaccharide is one of its major active ingredients. Our previous studies have demonstrated that polysaccharide extracted from Rheum tanguticum (RTP) can prevent 2, 4, 6-trinetrophene sulphonic acid (TNBS) - induced ulcerative colitis in rats[12]. The present study was mainly conducted to describe whether RTP had protective effects on intestinal epithelial cells against hydrogen peroxide-induced acute oxidant stress in vitro.

Following pre-treatment with or without RTP (30, 100, 300 μg/mL) for 24 h, HIEC cells were exposed to H2O2 (100 μmol/L) for another 2 h. Epithelial monolayers were then photographed with a Nikon camera under an inverted phase contrast microscope (Leica, Germany).

HIEC cells (1×103/well) were seeded onto 96-well plates. Cultures were then supplemented with or without RTP (30,100,300 μg/mL) and incubated for another 24 h before H2O2 (100 μmol/L) was added. Colorimetric MTT assay was performed to assess cell viability. Tetrazolium salt thiazolyl blue was added to a final concentration of 5 mg/mL and incubated for 4 h. Cells were washed and lysed with dimethyl sulfoxide (DMSO). Metabolization of MTT correlated directly with the cell number and was quantified by measuring the absorbance at 570 nm (reference wavelength 690 nm) using a microplate-reader. All experiments were performed in triplicate at least.

Acridine orange staining was used to confirm the absence or presence of apoptosis by morphological criteria. In brief, cells were inoculated onto the glass slides pre-coated with poly-L-lysine. At the end of experiment, cells from each group were fixed in 95% ethanol for 15 min, and then pre-treated with 1% acetic acid for 30 s before incubation with acridine orange (AO, 2×10-6 g/mL, Sigma, St. Louis, MO) for 1 min. Cells were visualized for nuclear fragmentation under a phase-contrast inverted microscope (Leica). Induction of apoptosis with H2O2 and reduction in extent of the apoptotic response to RTP were confirmed qualitatively.

Cell apoptosis was examined by flow cytometry using an Annexin V-FITC Apoptosis Detection Kit (Middlefield Way, Mountain View, CA). Cells were treated in a similar manner as described above for the MTT assay, collected and incubated with Annexin V-FITC and propidium iodine (PI) for 5 min in darkness. The double-stained cells were then analyzed by flow cytometry to detect the percentage of apoptotic cells. The excited wavelength was 488 nm and the emission wavelength was 530 nm.

Cells were pre-treated with or without RTP (30,100,300 μg/mL) for 24 h before exposed to H2O2 (100 μmol/L, 2 h). LDH, an indicator of cell injury, was detected by chromatometry with an assay kit (Nanjing Jiancheng Biochemical Reagent Co., Nanjing, China). Briefly, cell medium (50 μL) was gently aspirated and saved for LDH determination. After reaction, each sample was detected and the absorbance was read at wavelength 440 nm. LDH could catalyze the synthesis of pyruvic acid from lactic acid and pyruvic acid then reacted to form 2,4-dinitrophenyl-hydrazine. The latter showed brownish red color in basic solution.

Cells were pre-treated with or without RTP (30,100,300 μg/mL) for 24 h before being exposed to H2O2 (100 μmol/L, 2 h). The content of MDA, a compound produced during lipid peroxidation, was determined using the thiobarbituric acid method with a commercial kit. The absorbance of each supernatant was measured at 532 nm. 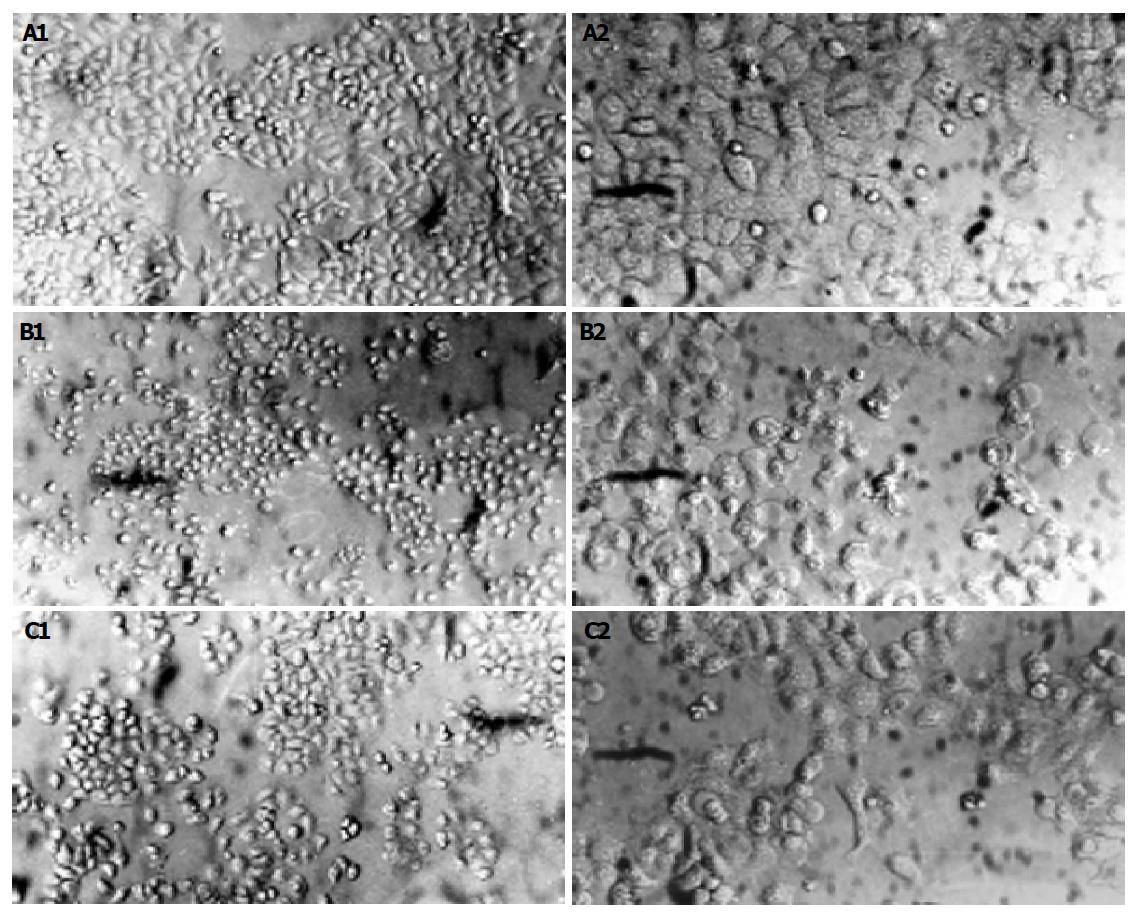 After exposure to H2O2, cell viability decreased significantly compared to normal group (P<0.05). Cell viability increased in a dose-dependent manner after being treated with RTP (P<0.05). The pre-treatment with RTP at 300 μg/mL could prevent over 80% of H2O2-induced cell death (Figure 2). 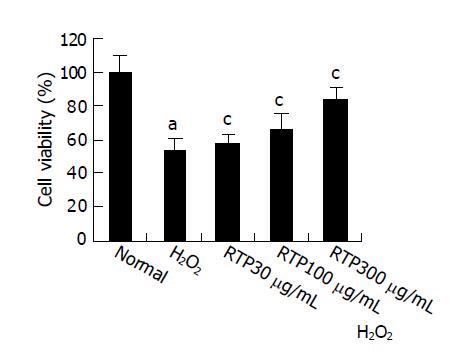 After exposure to H2O2 for 2 h, typically morphological characteristics of apoptotic cells were identified with chromatin aggregated in compacted masses, displaying strong green fluorescence in nuclei. Clusters of membrane-bound apoptotic bodies were also present. Cells in normal group showed normal size, shape and greenish structure of nuclei with different shades. When the cells were pre-treated with RTP, apoptosis could be partially inhibited (Figure 3). 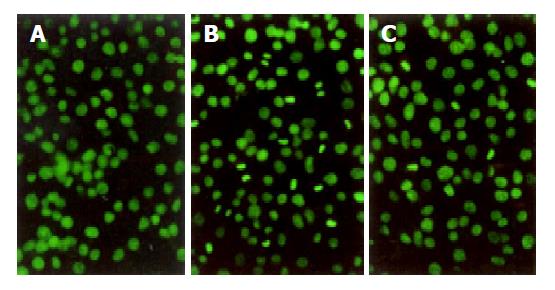 No Annexin V-positive cells were detected in normal group, while a large number of Annexin V-positive cells were detected in H2O2 group compared to RTP pre-treated groups. The apoptotic rate of cells in H2O2 group was 31.1%. In RTP pre-treated groups (100 and 300 μg/mL), the apoptotic rates were 24.4% and 21.5% respectively. When compared with H2O2 group, there was a significant difference (P<0.05) (Figure 4). 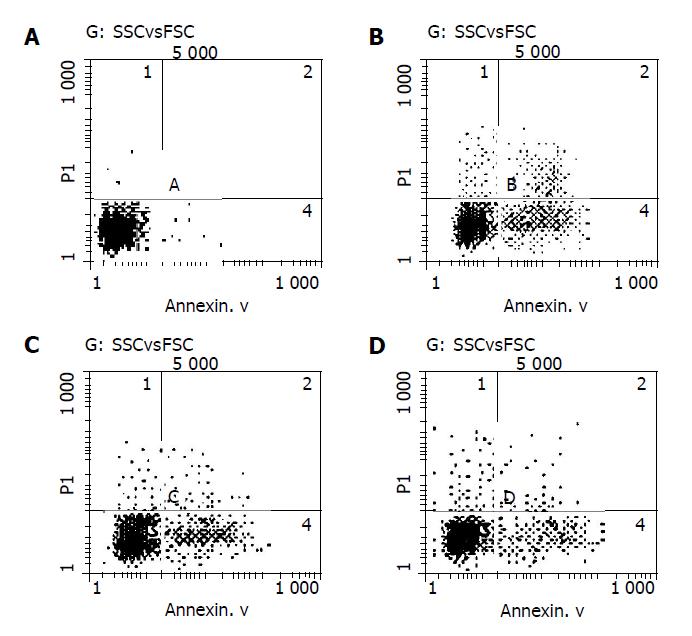 LDH release into the media was used as an index of the integrity of cell membranes or necrosis in response to the oxidant burden.

As shown in Figure 5A, there was a marked increase of LDH leakage after addition of H2O2 to the culture media. This response was attenuated by RTP in a dose-dependent manner.

The toxicity caused by H2O2 was normally accompanied with the increase of lipid peroxides. As shown in Figure 5B, the intracellular MDA increased after the cultures were exposed to 100 μmol/L H2O2. However, H2O2-induced MDA production was markedly attenuated in a dose-dependent manner by RTP.

In addition, compared to the control cultures, the activity of SOD was decreased by 80% when the cells were exposed to H2O2. Pre-treatment with RTP significantly attenuated the changes of SOD activity in a dose-dependent manner as well (Figure 5C).

Although these signals and metabolic events may be important in the regulation of cell death, cell death pathways are also associated with the secondary production of oxidants that appears to contribute to the magnitude of cell death. The intracellular redox level, in particular, has been shown to play a critical role[13].

There is ample evidence that cell death is associated with increased intracellular levels of reactive oxygen species (ROS)[14,15]. This increase in ROS may be due to overproduction of ROS from extracellular or intracellular processes, or there may be a decrease in endogenous antioxidant defense. Much work in recent years has been centered on such intracellular antioxidants as superoxide dismutase, GSH, and catalase. Alterations in activities of these antioxidant systems have been implicated as causes of diseases as well as cell death[16].

Evidence for the involvement of reactive oxygen metabolites is found in inflammatory bowel disease in man and in animal models of intestinal inflammation. Superoxide and hydrogen peroxide generated by activated leukocytes cause damage to the mucosa in intestinal inflammation[15]. Reactive oxygen radicals are unavoidably formed in biochemical processes, and several enzymes are designed to inactivate those metabolites under physiological conditions including cytochrome oxidase, superoxide dismutase and catalase. It has been demonstrated that activated leukocytes form reactive oxygen metabolites and oxidative stress is one of the causes for tissue injury during inflammatory bowel diseases[17].

Polysaccharide is one of the major active ingredients of Rheum tanguticum. Polysaccharide abstracted from Rheum tanguticum can stimulate the function of phagocytes, thus protecting livers function and others[12,18]. Here, polysaccharide with molecular weight 65-80 kDa, has strong anti-oxidant and protective effects against H2O2-induced cell injury in cultured HIEC cells.

Pre-treatment with RTP at 300 μg/mL could preserve over 90% of cell survival after H2O2 insult and decrease LDH leakage and cell apoptosis. The isolated polysaccharide also inhibits the production of MDA and the activity of SOD caused by exogenous H2O2. Thus, RTP may serve as a useful protective agent that mitigates the oxidative stress.

Free radical molecules can lead to damage or destruction of a variety of tissues. Excessive reactive oxygen species result in lipid peroxidation, oxidation of proteins and damage of DNA. Cells are often equipped with several antioxidants for the prevention of free radical damage. SOD and GSH-Px, along with other non-enzymatic antioxidants, such as ascorbate and GSH, serve as a detoxifying system to prevent cell damage caused by reactive oxygen species, and among these, antioxidant enzymes play a pivotal role. The combined action of GSH-Px and SOD provides a repair mechanism for oxidized membrane components. Exposure of cultured cells to free radicals results in an imbalance in energy metabolism in addition to the deleterious effects of hydroxyl and peroxyl radicals on membrane lipids and proteins. Therefore, cellular function is impaired, which finally causes cell death[19].

In conclusion, H2O2-induced decrease in cell survival is correlated with reduction in SOD activity, enhancement in cell apoptosis and MDA content. RTP may have protective effects against H2O2-induced intestinal epithelial cell injury. Further studies are needed to confirm the exact mechanism of these effects.