CONCLUSION: The HG groups had a more advanced stage and a higher recurrence rate than the LG group. Although there was no difference between subtotal and total gastrectomies, more careful assessments of multiplicities and radical resections with lymph node dissections seem to be needed because of multiplicity and LN invasion even in LG group.

Because primary gastric lymphoma has a tendency to be localized in the stomach for a long time, surgical resection remains an important treatment modality[1-3]. Helicobacter pylori has been proposed to be an important cause of the formation of mucosa associated lymphoid tissue (MALT) and the development of subsequent lymphoma. About 80% of low grade MALT lymphomas were found to be cured by H pylori eradication alone, and there are some reports in which high grade MALT lymphoma was also cured in this manner[4]. Recently, lymphoma related with MALT was classified as ‘extra nodal marginal zone B cell lymphoma of mucosa-associated lymphoid tissue (MALT lymphoma)’ by WHO[5]. According to the report of Isaacson et al.[6] in 1983, gastric lymphoma may be divided into low grade MALT lymphoma, high grade MALT lymphoma, and diffuse large B cell lymphoma. The aim of this study was to analyze the clinicopathologic characteristics of surgically resected gastric lymphoma patients according to the postoperative histopatholgic grades.

We enrolled 57 gastric lymphoma patients who had undergone operations at Seoul National University Hospital from January 1995 to July 2002. 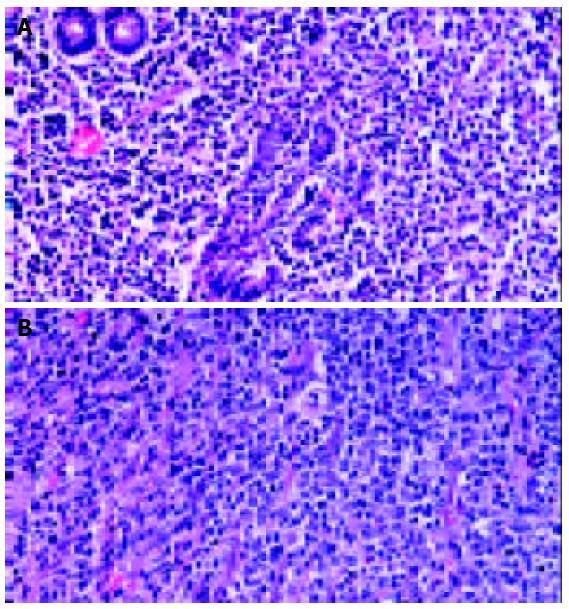 The numbers of patients of the LG group and the HG group were 20(35.1%) and 37(64.9%), respectively. One patient had a synchronous gastric adenocarcinoma and low grade MALT lymphoma.

The male to female ratio was 1.11:1 (30:27) without any significant difference between the groups.

Epigastric pain and discomfort were the most common symptoms. The duration of the symptoms of the LG group had a tendency to be longer than that of the HG group, but it was not statistically significant. Among B symptoms specific in lymphoma, only weight loss was found in 9 patients (15.8%), but fever and night sweats were not found. Moreover, the reason of weight loss was obscure, i.e., as to whether it was a part of the B symptoms or a result of the gastrointestinal symptoms (Table 3).

To identify relationships with H pylori, a pathologic examination with or without a CLO test was used in 38 cases, the serology test (H pylori IgG) in 1 case, and both methods in 3 cases.

Of the patients diagnosed as low grade MALT lymphoma, 5 patients took the regimen for H pylori eradication. Four patients had surgical resection later because of remnant lymphoma at follow-up gastroscopy, and 1 patient underwent the operation because of transformation to a higher grade.

Methods and results of operations

In all groups, the lower third was the most common lymphoma location, which occurred in 45.6%(26/57). If the patients with additional lesions in the upper or middle third were included, totally 54.4% (31/57) of patients had lesions in the lower third of the stomach. There was no significant difference between the groups (Table 7).

We used both staging systems, namely TNM stages and Musshoff stages (modified Ann-Arbor stages). Regardless of the staging system, patients in the LG group had more proportions of early lesions than those in HG group (Tables 8-9).

Multiple lesions were found in 11 patients (19.3%) according to the postoperative pathologic reports. In 2 cases, no lymphoma lesion was found in the postoperative specimens, one had a diffuse large B cell lymphoma which received preoperative chemotherapy (COPBLAM #6), and the other was diagnosed as low grade MALT lymphoma preoperatively who did not receive any special therapy before operation. There was no difference in the proportions of multiple lesions among the subgroups. In 11 patients with multiple lesions, 6 had subtotal gastrectomy, and the other 5 had total gastrectomy (Table 10).

Six of 8 patients with recurred diseases died. One died of pneumonia during chemotherapy for a recurred lymphoma, and another died of brain infarct of unknown etiology. The other 4 patients died of recurred disease progression.

Grades (P = 0.024), TNM stages (stages I, II vs stages III, IV, P = 0.002) were found to be risk factors by univariate analysis. Otherwise, age, sex, size of lesion, depth of invasion, lymph node metastasis, and the presence of multiple lesions, were all unrelated to recurrence (Figures 2, 3). Patients with Musshoff stage IIe lymphoma showed a tendency of lower 5 years disease-free survival rate than those with stage Ie lymphoma (87.1% vs 76.1%, P = 0.139), but it was not significant. None of stage Ie patients in LG group had recurrence, but 4 of stage Ie HG group patients had recurrence (5-year disease-free survival rate 100% vs 77.9%, P = 0.080). 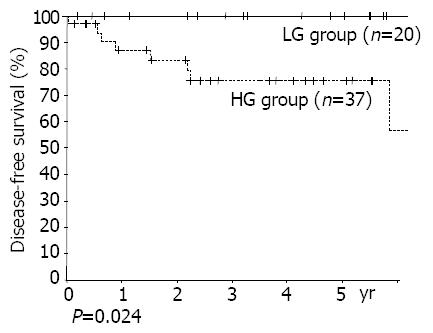 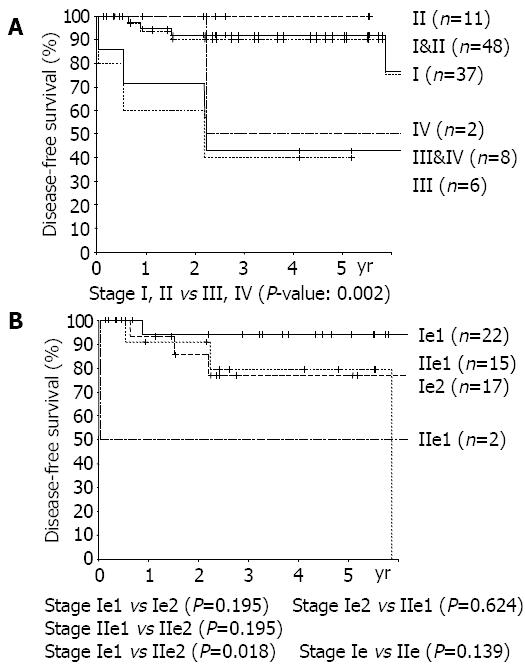 The stomach is the most common intraabdominal organ for extralymphatic lymphoma in the abdominal cavity, about 20% of extralymphatic lymphomas occur in the stomach. Normally, the stomach has no lymphatic tissue in the mucosa or submucosa. The formation of MALT has been known to be related with H pylori and some autoimmune diseases[9,10]. In our study, the proportion of patients with evidences of H pylori was 73.8% overall, and 68.8% in the low grade MALT lymphoma group. This result corresponded with the results of Paik et al.[11] in Korea, but the figures were slightly lower than the 70-90% obtained elsewhere[12]. The ratio of males to females was 1.11:1. Compared to other results in which the male to female ratios were 1.7:1-2: 1, our result showed a higher proportion of female patients.

We could spare the time and cost of attempting to eradicate H pylori, if we knew the characteristics of the group whose diseases were resistant to H pylori eradication therapies and tended to transform to higher grades. Currently, t(11:18), H pylori with Cag A(+), invasion deeper than the submucosal layer by endoscopic ultrasonography, and lymph node metastasis have been reported to be risk factors of resistance[18]. However, in our series, all 5 patients whose lymphoma invaded the submucosal layer without lymph node metastasis failed H pylori eradication and underwent operation, demonstrating the need for further studies on the risk factors involved.

Misdiagnoses could be made in patients with higher grade MALT lymphoma or diffuse large B cell lymphoma once diagnosed as low grade MALT lymphoma preoperatively. Strecker et al.[19] reported that the accurate diagnostic rate with grade differentiation was 73% even in the large medical institutes because of the limitations of the small, partial biopsy samples produced by gastroscopic procedures. In our study also, 87% showed the same diagnosis and the same grade before and after operation.

Eck et al.[20] proposed complementary serology testing to confirm the relationship with H pylori, because positive results by serologic tests are obtained even in H pylori-negative patients by gastroscopic biopsy. We checked 4 cases in which serology testing was performed. Three patients were also positive by biopsy, but one patient had a positive serologic result despite a negative finding by gastroscopic biopsy.

Recently, some have suggested non-operative methods such as H pylori eradication, chemotherapy, or radiotherapy as the primary therapeutic strategies instead of surgery[21,22]. Whereas in our study only 3 patients with remnant tumor in the resection margin undertook radiotherapy, Schecheter et al.[23] reported the complete resolution of 17 cases of MALT lymphomas in stages I and II with radiotherapy. The German multicenter study GIT NHL 01/92 in 2001 reported no significant difference in the survival or recurrence rates between 79 patients who had surgery alone or surgery with adjuvant chemotherapy and 106 patients who had chemotherapy alone[24].

On the other hand, surgical resection as the primary therapy allowed the accurate staging of the lymphoma. Besides, in those patients with serious complications such as perforation and bleeding, surgical procedure became more difficult due to the fragile gastric wall, and the higher risk of postoperative complications. Moreover, peritoneal seeding could theoretically occur via the perforated gastric wall[1-3,25].

In the past, concurrent splenectomy and multiple lymph node biopsies were recommended for staging. But, the local spreading characteristics of primary gastric lymphoma make the splenectomy unnecessary if the spleen is not invaded. These characteristics sometimes make it reasonable to use the TNM staging systems instead of Ann-Arbor staging. There are some controversies on the necessity of multiple intraoperative lymph node biopsy. Chang et al.[32] reported that about 40% of low grade lymphomas limited within the submucosal layer had lymph node metastasis. Our series also had 2 low grade lymphoma patients with lymph node metastasis, and 2 of HG group who had no lymph node metastasis (stage Ie) recurred in the intraabdominal lymph nodes. Only 1 patient among those with recurred diseases had recurred lesions in the remnant stomach, and the majority of them had their recurred lesions in lymph nodes. So, wide lymph node dissection must be performed, and additional biopsy for suspicious lymph nodes is recommended.

Therefore, subtotal gastrectomy can be performed safely with sufficient lymph node dissection, but sufficient preoperative searching for multiple lesions by gastroscopy or endoscopic ultrasonography is required, and close postoperative follow-up should be emphasized.

We could not found a definite relationship between the stages and the disease-free-survival rate, because of the small size of the objectives and a high proportion of recurred patients with lymph node negative lymphoma. One of them having a 13 cm×10 cm lymphoma directly invading colon and pancreas was classified as Musshoff stage Ie, and contributed to a high proportion of stage Ie patients in all recurred ones. All the recurred patients in stage-Ie were of HG group and none of LG group had recurred, even though it showed no significant differences. Most of them underwent sufficient lymph node dissection (D2), and the number of dissected lymph nodes was 64, 60, 19, 11, respectively. It implies that high grade lymphoma is more aggressive and has a greater possibility of systemic features than low grade lymphoma, even in early stage.

In conclusion, the majority of patients with low grade MALT lymphoma had early stage disease, which is curable by surgery only. The proportions of advanced diseases that need additional chemotherapy, and the proportions of recurred patients were lower in the LG group than in the HG group. The risk factors of recurrence were pathologic grade and TNM stage. Among the patients with recurred lymphoma, the number of patients who had subtotal gastrectomy was somewhat greater than the number of patients who had total gastrectomy, even though it was not significant. The existence of multiple lesions or lymph node metastasis even in low grade MALT lymphoma emphasizes the need for more thorough preoperative diagnosis, radical surgical resection with lymph node dissection, and careful postoperative follow-up.