Schistosomiasis is a chronic parasitic disease caused by a trematode blood fluke of the genus schistosoma that belongs to the schistosomatidae family. The ancient Egyptians contracted the disease more than 4 000 years ago. It was recognized through haematuria, the main sign of urinary bilharziasis was recorded in the Kahun papyrus 1900 B.C. as “â-a-â” disease[1].

One of the milestone events in the history of bilharziasis occurred in 1851, Theodor Bilharz, a German physician working at Cairo Medical School, saw the fluke in the mesenteric veins of post-mortem of an Egyptian boy[2,3], then described two types of ova, one with a terminal spine, and the other with a lateral spine, which he considered to be the mature and immature ova, respectively, produced by the female worms of the same species[2].

The controversy was finally settled by Leiper (1915-1918), when he demonstrated the presence of two species of Bilharzia that were different with regard to the morphology of the adult worms, the type of ova, the molluscan intermediate host, and the human habitat (i.e. the urogenital versus the intestinal tract)[4].

Another milestone was the introduction by McDonagh (1918), of antimony as an antibilharzial agent, and the popularization of the drug by Christopherson (1918) in Egypt[5,6].

In the life cycle, the adult worms live in terminal venules of the bowel (S mansoni, S japonicum) or bladder (S. haematobium). When eggs passed in feces or urine reach fresh water, a larval form is released that subsequently infects snails, the intermediate host. After development, infective larvae (cercariae) leave the snails, enter water, and infect exposed persons through the skin or mucous membranes. After penetration, the cercariae become “schistosomula” that reach the portal circulation in the liver, where they rapidly mature. After a few weeks, adult worms pair, mate, and migrate mainly to terminal venules of specific veins, where females deposit their eggs. By means of lytic secretions, some eggs reach the lumen of the bowel or bladder and are passed with feces or urine. Others are retained in the bowel or bladder wall, while still others are carried in the circulation to the liver, lung, and (less often) to other tissues.

Schistosomiasis is characterized by the formation of inflammatory granulomas around deposited parasite eggs[7]. Granuloma formation is a cell-mediated immune response that is dependent on CD4+ T cells sensitized to schistosomal egg antigens[8,9]. This T cell-mediated granulomatous response gets to the peak between 8 and 10 wk after exposure in mice. This acute stage granuloma is characterized by dense cellularity and maximum cytokine production[7,10,11]. As the infection progresses into the chronic stage (16-20 wk postinfection), cytokine production and cellularity decrease while the fibrotic components of the immunopathologic process increase[7,10,11]. Thus the end result of host responses to schistosome eggs in the liver is advanced portal fibrosis with dense deposits of collagens in greatly expanded portal tracts.

Schistosomal involvement of the liver is an excellent model of the study of immunologic liver injury, fibrosis and hemodynamic disturbances in the absence of parenchymal injury[12]. It may occur with all species of human schistosomiasis but is especially severe with S. mansoni and S. japonicum, both in acute and chronic phases of the disease[13].

HSS is a chronic liver disease characterized by granulomatous reaction, portal fibrosis, pre-sinusoidal portal hypertension, splenomegaly, hypersplenism, esophageal varices and haemorrhage[14]. The relative risk to develop hepatosplenomegaly in persons infected with S. mansoni have been reported in correlation with HLA-A1 and B5[15].

In advanced HSS, there is excess collagen deposition, mainly in the portal tract and Disse’s space with obstruction of sinusoidal fenestration, resulting in fibrosis and capillarization of sinusoids[16]. According to whether the larger or small portal tract is mainly involved, Hashem[17] classified schistosomal hepatic fibrosis into coarse (first described by Symmers in 1903)[18] and fine types.

The term schistosomal cirrhosis is no longer used, as nodular regeneration and diffuse distortion of hepatic lobular architecture are not the features of hepatic schistosomiasis. The parenchyma between fibrotic areas is typically well preserved, correlating with the maintenance of nearly normal hepatic function, one of the clinical hallmarks of HSS[19].

Diagnostic procedures include demonstration of ova in stool or in rectal snip, ultrasonography of the liver which reveals characteristic periportal fibrosis and sometimes distention of portal and splenic veins exceeding 12 or 10 mm width respectively, upper GI endoscopy which demonstrates esophageal and/or fundal varices and finally liver biopsy which shows Symmer’s or pipe-stem fibrosis.

Depressed immunity may also account for chronic salmonellosis infection that often complicates advanced hepatosplenic schistosomiasis. There are prolonged fever and positive blood culture lasting for months and raised level of transaminases as a manifestation of non-specific hepatitis. It can only be cured by both antibacterial and antischistosomal agents[30].

Curse of schistosomiasis on Egyptian liver

The curse of schistosomiasis on the liver involves both direct offensive effect as well as indirect effect of both intravenous therapy and molluscicides used for combating the snail intermediate hosts. The direct effect is represented by ova deposition in the portal tributaries with granuloma formation, which is replaced overtime by periportal fibrosis and hepatosplenomegaly. Subsequently, portal hypertension may result in the development of esophageal varices and variceal bleeding. Ascites and hepatic coma are the end-stage findings. The indirect effect is represented by both transmission of hepatitis B and hepatitis C through improperly sterilized glass syringes[31] used at that time. In the meantime schistosomiasis induced immune suppression could result in increased persistence of viraemia following acute infection of both hepatitis B and C[32]. This could partially explain the increased prevalence of HCV in Egypt. El-Zayadi et al., 1986[33] pointed out that the hepatotoxic effect of K antimony tartarate (tartar emetic) was a heavy metal like arsenic used as therapy in the development of portal fibrosis and angiosarcoma. Furthermore, the spray of cupper sulphate in canals to combat the snail intermediate hosts has been proved to have a hepatotoxic effect which was incriminated in the pathogenesis of angiosarcoma, hepatocellular carcinoma and cirrhosis[34] (Figure 1). 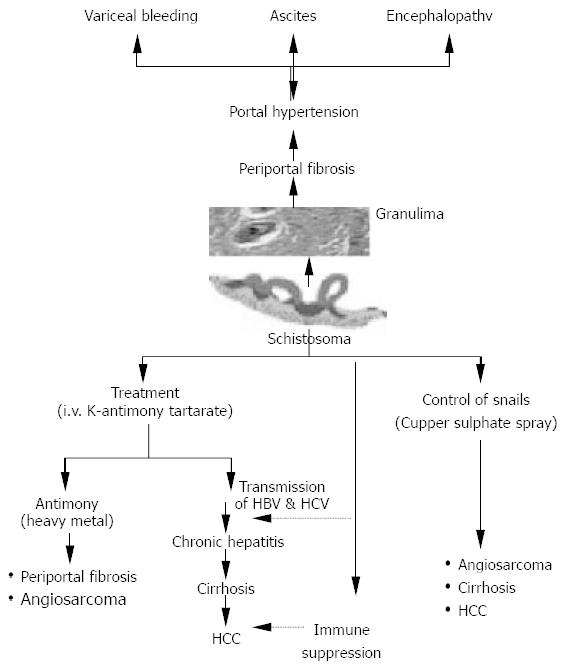 Figure 1 Impact of pathogenic mechanisms, therapeutic and control meaures of schistosomiasis on the liver (El-Zayadi, 1998).

Recently, this gloomy picture has been dramatically changed with adoption of effective control measures and the use of oral therapy for schistosomiasis. In the meantime, the use of disposable syringes has reduced the risk of transmission of HBV and HCV.