METHODS: Three male patients, infected with HCV through multiple transfusions, were identified from clinical symptoms and monitored by aminotransferase for 60 months. Blood samples taken at months 0, 32, and 60 were used for viral RNA extraction. A segment of HCV NS3 region was amplified from the RNA extraction by RT-PCR and subjected to subcloning and sequencing. HLA types of these three patients were determined using complement-dependent microlymphocytotoxic assay. CTL epitopes were predicted using MHC binding motifs.

RESULTS: No patient had clinical symptoms or elevation of aspartate/alanine aminotransferase. Two patients showed positive HCV PCR results at all 3 time points. The other one showed a positive HCV PCR result only at month 0. A reported HLA-A2-restricted CTL epitope had no alteration in the HLA-A2-negative carrier over 60 months. In the HLA-A2-positive individuals, all the sequences from 0 month 0 showed an amber mutation on the initial codon of the epitope. Most changes of consensus sequences in the same patient occurred on predicted cytotoxic T cell epitopes.

CONCLUSION: Amber mutation and changes of consensus sequence in HCV NS3 region may be related to viral immune escape.

HCV is a linear, single-stranded positive-sense, 9400-nucleotide RNA virus. HCV constitutes its own genus in the family Flaviviridae. The HCV genome contains a single large open reading frame that codes for a virus polyprotein of approximately 3000 amino acids. Due to the high mutation rate of RNA dependent RNA polymerase, there are genotype and quasispecies diversity of HCV[16-19]. The high mutation rate may interfere with effective immunity and cause the progression to chronicity[20,21].

Of the components of adaptive immunity, cytotoxic T cells play an important role in eliminating intracellular infections[22]. They recognize body cells infected with viruses by detecting peptide fragments derived from viruses bound to MHC class I molecules on the infected body cells. Then, they kill the infected cells before viral replications complete. In this study, 3 patients with transfusion-associated hepatitis C were followed-up for 60 mo to evaluate the evolution of cytotoxic T cell epitopes in the HCV NS3 region.

Patients C, Z and W, being 43, 48 and 49 years old Chinese males, were infected with HCV through multiple transfusions. They were followed-up for 60 mo after identification. During the follow-up period, no elevation of aspartate/alanine aminotransferase was found. Their peripheral blood was collected at mo 0 (the time of identification), 32 and 60, and stored at -70 °C. Patients C and Z were positive for HCV RNA. Patient W was positive for HCV RNA only in the blood sample taken at mo 0 and consistently negative after that.

HLA types of the three patients were assessed by using the Tasaki HLA class I dry tissue typing tray (One Lambda, Canoga Park, CA). Briefly, blood samples were drawn and lymphocytes were isolated immediately. After antibody and 2 × 106 lymphocytes were mixed in each well, 1 μL of complement was added into each well to incubate at room temperature for 1 hour. After incubation, the cells were stained with eosin and fixed with formaldehyde. Positive (dead) lymphocytes appeared dark and non-refractiles with eosin dye.

Cloning and sequencing of amplified segment of HCV NS3

DNA sequences were translated and aligned. Consensus sequence was produced for every 5 clones of each blood sample. Cytotoxic T cell epitopes for each consensus sequence were predicted based on the HLA type of the patients and MHC molecule binding motifs[25]. 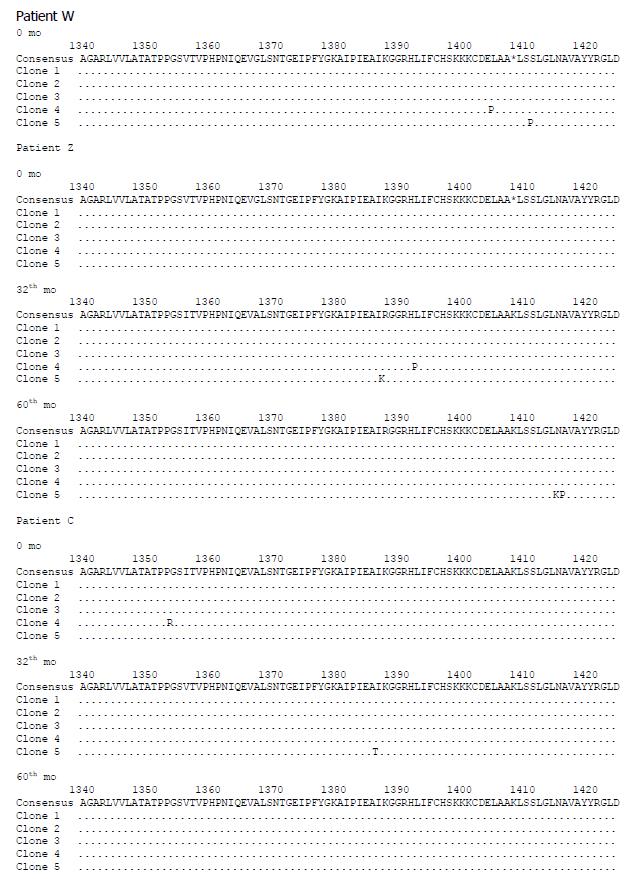 Due to errors of the RNA-dependent RNA polymerase, RNA genomes had a relatively high mutation rate[25,26]. RNA viruses evolve as complex distributions of mutants termed viral quasispecies. These coexisting mutant genomes always have a consensus or master sequence. Despite the potentially high mutation rate and variability of RNA viruses, changes in the consensus sequence of a viral population would occur only if some selection mechanism acted on the population and caused a shift in the population equilibrium[27]. Immune response of the host can influence the distribution between different viral variants and will consequently cause a change in the consensus sequence. A cellular immune-driven selection pressure has been demonstrated by the existence of HCV escape mutants in relation to cytotoxic T cell epitopes[28]. In the HCV-infected human, the NS3 protein seems to be fairly immunogenic. T cell activation in response to NS3 has been detected in a number of studies of patients with acute or chronic HCV infection[24,29]. It was proposed that a strong in vitro T cell reaction to NS3 correlated with clearance of acute HCV infection whereas a less vigorous, or absent, NS3-specific T cell reactivity was observed in those who progressed to chronicity[30]. Thus, in this study, we chose a segment of HCV NS3 region as our focus on sequence evolution.

T lymphocytes recognize their antigens in context of MHC-encoded molecules, a phenomenon called MHC restriction. Our sequence segment encompassed a cytotoxic T cell epitope, which was restricted by HLA-A2 and reported by Rehermann et al[24]. In patients with HLA-A2 allele, their viral consensus sequences showed stop codons at the initial part of this epitope. On the contrary, in patients without HLA-A2 allele, their viral consensus sequences did not show the stop codon. Normally, stop codons are generated by random non-sense mutations in RNA virus and they are expected to occur randomly throughout the entire coding region. Viruses with stop codon in the open reading frame have been found to be defective viruses which usually make a small fraction of the RNA virus quasispecies[31,32]. Here, stop codons were unusually concentrated at the beginning of the reported epitope, in the sequences of patients with HLA-A2 allele, suggesting that they are specifically selected by some pressure, probably by cytotoxic T cells. We would suppose that HCV specific and HLA-A2-restricted cytotoxic T cells, which recognize and kill the infected hepatocytes to prevent replication and proliferation of the viruses, were generated in patients W and Z. Under this immune pressure, viral quasispecies in these two patients would have shifted toward a new equilibrium to avoid the immune attack. In patients W and Z, the defective viruses, which did not express the reported cytotoxic T cell epitope, dominated the viral quasispecies at month 0. This may reflect the strong immune pressure at that time. Thirty-two months later, in patient W, the viruses were cleared and the patient was recovered. In patient Z, the viruses were not cleared at month 32 or 60, suggesting that the viral quasispecies escaped from the immune pressure and survived.

In summary, by molecular sequencing, the quasispecies nature and sequence evolution of HCV NS3 region can be revealed. By HLA typing and epitope prediction, the non-sense mutation and changes of consensus sequences might be the result of immune pressure. This study has paved the way for further cytotoxicity assay[37] to confirm the possible immune target sites of HCV.