AIM: Inflammatory fibroid polyp (IFP) is a rare benign lesion that may occur throughout the digestive tract. IFP is more commonly found in the antrum of the stomach in particular. It mostly affects adults at the average age of 60 years. These polyps are able to cause abdominal pain, gastrointestinal bleeding, intestinal obstruction or intussusception. In this paper we report a case of gastric IFP with unusual presenting features.

METHODS: A child with gastric IFP was described and the literature was reviewed.

RESULTS: A 4-year-old girl presented with fever for 2 months, arthralgia of knees and ankles, iron deficiency anemia, and hypoalbuminemia. Her stool examination was positive for occult blood. The upper gastrointestinal study demonstrated a large lobulated mass at the upper part of gastric body. Partial gastrectomy en bloc with this 5 cm × 8 cm mass was subsequently performed. Pathological examination was consistent with IFP. Following the mass excision, her fever abruptly declined and disappeared together with anemia and arthralgia. She remained asymptomatic and the abdominal ultrasonography performed at the 24-month follow-up demonstrated no recurrence of the tumor.

CONCLUSION: The etiopathogenesis of IFP still remains unclear. The presence of IFP throughout the gastrointestinal tract and its variable clinical appearances make it difficult to diagnose. The inflammatory symptoms found in this patient support the hypothesis of inflammatory benign lesions of IFP.

Inflammatory fibroid polyp (IFP) is a solitary polypoid or sessile lesion with an inflammatory basis. It is a rare benign lesion that may occur throughout the digestive tract, but is most often seen in the stomach (approximately 80%)[3]. IFP in the stomach is usually located in the antrum or prepyloric region[4,5]. In large retrospective studies of gastric polyps, 3.1% - 4.5% were found to be IFP[6,7]. It is slightly more common in women (female:male ratio 1.6:1)[5]. It is found in all age groups, although not often in children, and its maximal incidence is in the sixth decade[7]. The symptomatology is determined by its site. In the stomach, it causes pyloric obstruction, and often in the small bowel, intussusception which is the most common presentation in children.

We report a case of gastric IFP who presented with prolonged fever, arthralgia, hypoalbuminemia, and iron deficiency anemia. Surgical excision led to a complete resolution of those symptoms.

A 4-year-old girl presented with high fever for 2 months, arthralgia of knees and ankles, and anemia that required multiple packed red cell transfusions. The lowest hemoglobin was 3.9 g/dL. A provisional diagnosis of juvenile rheumatoid arthritis was made. She was treated with aspirin and prednisolone, but had no improvement. Later she was referred to our hospital in June 2001. 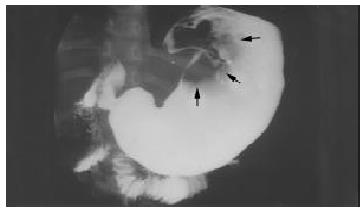 At laparotomy, a 5 cm × 8 cm mass was found at the body of the stomach. Partial gastrectomy en bloc with the mass was performed. Light microscopic examination of the gastric mass showed foci of ulcerated mucosa, focal elongated distorted branching and dilated hyperplastic foveolar and glands, covering a mass consisting of proliferative fibroblasts and blood vessels admixed with mixed inflammatory cell infiltrates in the stroma (Figure 2). The histological finding was consistent with IFP. 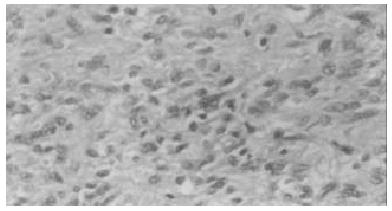 The patient developed postoperative convulsion due to steroid-induced hypertension and encephalopathy. She was treated with phenytoin and nifedipine which were later discontinued after 2 and 4 months, respectively. Fever, arthralgia, hypoalbuminemia, and anemia resolved after removal of the polyp. She was discharged 12 days after the surgery. The abdominal ultrasonography performed at the 24-month follow-up demonstrated no recurrence of the tumor and she remained asymptomatic.

Current pediatric literature regarding IFP is limited to case reports and small case series as shown in Table 1. Clinical manifestations of IFP are variable, depending on the location and size of the lesion. Most are small and asymptomatic. Nevertheless, it is able to cause anemia due to gastrointestinal bleeding, abdominal pain, vomiting, weight loss, intestinal obstruction or intussusception. Physical examination is usually not conclusive. Imagings such as upper GI series, ultrasonography or computed tomography can help diagnose the mass, but the final diagnosis is generally based on endoscopy and histological examination.

Histologically IFP has been found to be characterized by a submucosal lesion with a mixture of proliferation of fibroblasts and small blood vessels, accompanying a marked eosinophilic infiltration[12]. Since the distinctive structures for diagnosis are located within the submucosa and at the base of the mucosa, the diagnosis may not be possible in most of these polyps by endoscopic biopsy specimen. In the past, IFP was reported under several terms, such as eosinophilic granuloma, submucosal granuloma with eosinophilic infiltration, hemangioendothelioma, hemangiopericytoma, and polypoid fibroma[11,13]. The etiology and the pathogenesis of IFP remain unclear. It has been hypothesized that several factors could damage the gastrointestinal mucosa and expose the stroma to several irritants (chemical, mechanical and biological), and stimulate the formation of polyps among certain people[14]. A polyp of this category is a specific response of gastrointestinal stromal tissue of unknown etiology. Electron microscopic study revealed that IFP represented a reactive lesion of myofibroblastic nature[15]. Thus, it has been now generally accepted that IFP is not a neoplasia, but a reactive process, either to an allergy or a foreign body and has no malignant potential[4-6].

An infective etiology has never been reported in IFP, although several reported cases showed its association with Helicobacter pylori infection[3,14]. In one of these reports, the patient also had autoimmune diseases (sarcoidosis, rheumatoid arthritis, and ankylosing spondylitis)[3]. This finding supports the possibility of an immunological reaction as a contributing factor. It is not exactly known that H pylori started an immunological reaction which caused the polyp, or it only complicated this finding. Surgery is the main therapy of IFP and the recurrence has not been observed after polyp removal. Small polyps up to 2 cm in diameter can be excised endoscopically.

Our case is unusual in several aspects, such as the patient’s young age at the presentation, the location of the mass at the corpus of the stomach, and the autoimmune-like manifestations. We hypothesized that IFP might release cytokines that cause fever and other autoimmune-like symptoms in this patient.

Not only is IFP rare in children, but its presence throughout the gastrointestinal tract and its variable clinical appearance make it difficult to diagnose. Patients with IFP may present with inflammatory symptoms and disappearance of the symptoms after polyp removal found in this patient supports the hypothesis of inflammatory benign lesions of IFP.

We express our gratitude to Dr. Kridakorn Kesorncam for her effort in the present study. Lastly, we would like to thank Venerable Dr. Mettanando Bhikkhu of Wat Nakprok, Bangkok and Ms. Pisanee Saiklin for reviewing the manuscript.