AIM: To investigate the effect of β-ionone on the growth and apoptosis of gastric adenocarcinoma cell line SGC-7901.

CONCLUSION: β-ionone can inhibit cell proliferation and induce apoptosis of SGC-7901 cells. However, the mechanism needs to be further investigated.

Following the dietary guidelines[1,2] that emphasize the importance of fruits, vegetables and grains could lead to an estimated 35% reduction in cancer deaths[3], fruits, vegetables and grains are potential sources of anticarcinogenic agents[4-11], such as nondigestible carbohydrates and micronutrients including β-ionone, ascorbic acid, γ-tocopherol, isoprenoids and folic acid. Epidemiological evidence suggested that intake of these constituents could lead to a reduced risk of chronic diseases such as cancer and cardiovascular disorders[3,12-14]. β-ionone, enriched in many fruits, vegetables and grains, is a common intermediate product of up to 22000 isoprenoids[15] and could exert potent anticarcinogenic and antitumor activities at the pharmacological level[16,17]. It has been documented that β-ionone could suppress the proliferation of melanoma, breast cancer and meningioma cells[18-21]. β-ionone has also been shown to have an effect on apoptosis of vascular endothelial cells[22] and tumor cells[23,24]. Although its exact mechanisms are not clear, the inhibitory effect of β-ionone on the proliferation of rapidly dividing cells has been demonstrated. In many instances, growth inhibition following terminal differentiation or anticancer drug treatment results in apoptosis.

Gastric cancer is one of the most frequent neoplasms in China and some other parts of the world[25-33]. Chemoprevention is always used as the main treatment for advanced cancer, and has been under intense investigation[34-49]. Understanding the mechanisms through which β-ionone suppresses the proliferation of gastric adenocarcinoma cells could provide a way to prevent this disease in general population. Therefore, in this study, we explored whether and how β-ionone induced apoptosis of human gastric adenocarcinoma cells.

SGC-7901 cells were seeded in eight 96-well plates, each well containing 3.0 × 103 cells. After 24 h, different concentrations of β-ionone were added with. On the next day, 0.05 mL of 1.0 mg/ml 3-(4,5-dimethylthiazole-2-yl)-2,5-dipenyltetrazolium bromide (MTT, Sigma) was added to one of the eight plates. After 4 h, culture media were discarded followed by addition of 0.2 ml dimethyl sulfoxide (DMSO) and vibration for 2 min. The absorbance was measured at 570 nm using a model 550 microplate Reader. β-ionone concentration required to inhibit the net increase in the 48 h cell count by 50% (IC50) was calculated based on the plots of data from three or more evaluations. The means were obtained on each of seven days and used to draw a curve of cell proliferation. The inhibitory rates (IR) on the 7th day were calculated as follows:

Morphological changes of apoptotic cells were determined by fluorescence microscopy. Briefly, the cells were collected and fixed in 100% ethanol, stained with 0.5 mmol/L Hoechst-33258 (Sigma) for 3 min at 37 °C, then visualized under a fluorescence microscope with ultraviolet (UV) excitation at 300-500 nm. The cells with nuclei containing condensed chromatin or cells with fragmented nuclei were defined as apoptotic cells.

The cultured SGC-7901 cells treated with β-ionone at different concentrations were scraped off and harvested. Subsequently, the cells were immersed with Epon 821, embedded in capsules and converged at 60 °C for 72 h, and then ultrathin sections (60 nm) were prepared and stained with uranyl acetate and lead citrate. The ultrastructure of cells was examined by transmission electron microscopy.

The TUNEL reaction could preferentially label DNA strand breaks generated during apoptosis, and allow discrimination of apoptosis from necrosis and primary DNA strand breaks induced by cancer chemoprevention agents. SGC-7901 cells were treated for 24 h and 48 h with β-ionone at various concentrations and collected by centrifugation. Specimens were fixed immediately in 4% formaldehydum polymerisatum and embedded in paraffin. Apoptosis of SGC-7901 cells was evaluated by using an in situ cell death detection kit (Roche Co. Ltd, Germany). The sections were deparaffinized in xylene and rehydrated through graded alcohol, treated with proteinase K and then 0.3% H2O2, labeled with fluorescein dUTP in a humidified box for 1 h at 37 °C. The cells were then combined with POD-horseradish peroxidase, colorized with diaminobenzidine tetrahydrochloride (DAB). Controls consisted of omission of fluorescein dUTP. Cells were visualized under a light microscope. The apoptotic index (AI) was calculated as follows: AI = (number of apoptotic cells/total number counted) × 100%.

Data were expressed as mean ± 22000 SD. Analysis of data was performed using the Student’s t test or one-way ANOVA. P < 0.05 was considered as statistically significant.

SGC-7901 cells were treated with β-ionone at various concentrations for 1-7 days, and the cell viability was determined as described above by MTT assay. As shown in Figure 1, β-ionone inhibited the growth of gastric adenocarcinoma cells in a dose- and time-dependent manner. The growth of the cells treated with β-ionone at concentrations of 100 and 200 μmol/L was significantly slower than that of the negative control within 7 days (P < 0.05). SGC-7901 cells incubated with 25 and 50 μmol/L of β-ionone grew slower, albeit not significantly than the negative control. β-ionone at 100 μmol/L and 200 μmol/L had an inhibitory effect of more than 90% on tumor cell growth 3 days after treatment. The inhibitory rate at the four progressively increasing concentrations of β-ionone was 12.04%, 30.59%, 78.25% and 94.15% 7 days after treatment. The IC50 value for β-ionone was estimated to be 89 μmol/L. 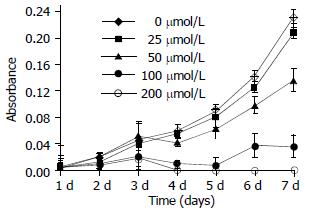 SGC-7901 cells in the negative control group exhibited a round shape, clear edge and homogeneous staining (Figure 2A). However, after 24 h and 48 h exposure to β-ionone, SGC-7901 cells began to show morphologic features of apoptosis, such as cell shrinkage, chromatin condensation and nuclear pyknosis (Figure 2B). The ultrastructural changes were observed by electron microscopy showing early changes of apoptosis including nuclear chromatin condensation and cell shrinkage (Figures 3A & 3B). 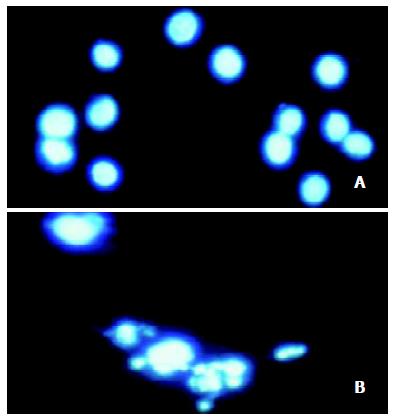 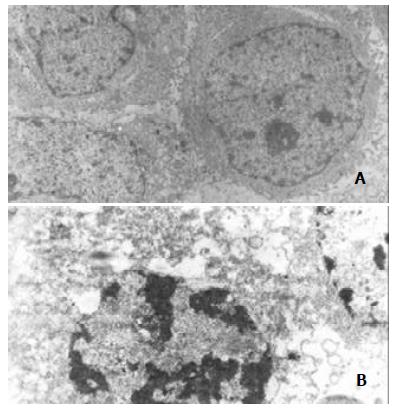 The cells with positive staining in the nuclei were defined as apoptotic cells (Figure 4). The results showed that after treatment of SGC-7901 cells with β-ionone at different concentrations for 24 h and 48 h, the AIs were significantly increased in a dose- and time-dependent manner (Table 1). 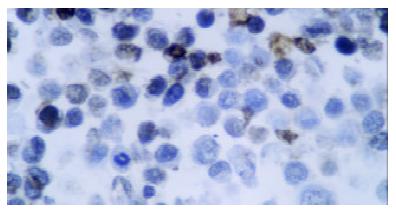 Epidemiologic studies have revealed a strong inverse association between frequency of intake of plant-derived foods and cancer incidence[3]. β-ionone, widely distributed in fruits and vegetables, has been found to be a common intermediate product of up to 22000 isoprenoids[15] and many other phytochemicals. It could exert broad and potent anticarcinogenic and antitumor activities when fed at pharmacological levels. β-ionone could also suppress the proliferation of melanoma and breast cancer cells[16-18]. However, the effects of β-ionone on gastric adenocarcinoma cells have not been reported.

Isoprenoid-mediated suppression of cell growth is clearly independent of a mutated ras function. β-ionone could suppress the proliferation of B16 and HL-60 cells that express ki-ras and n-ras, respectively. The study from Mo et al[16] showed that β-ionone also suppressed the proliferation of Caco-2 and MCF-7 cells which express wild-type ras. The action, like that of lovastatin, is independent of ras function. Both β-ionone and lovastatin can arrest HL-60 promyelocytic leukemia cells in the G1 phase of the cell cycle in a concentration-dependent manner. The present study demonstrated that β-ionone inhibited the growth of human gastric adenocarcinoma SGC-7901 cells in a dose- and time-dependent manner. The inhibition rates were 12.04%, 30.59%, 78.25% and 94.15% 7 days after treatment with β-ionone at 25, 50, 100 and 200 mmol/L, respectively. The IC50 value for β-ionone was estimated to be 89 μmol/L.

Apoptosis, also known as programmed cell death, is a natural process of cell suicide which plays a critical role in the development and homeostasis of metazoans[50,51]. It is a complex process regulated by a variety of factors such as Bcl-2[52], Fas[53] and p53[54]. The isoprenoid-mediated initiation of apoptosis might be independent of a mutated p53 function. β-ionone could initiate apoptosis in B16 and MCF-7 cells which express wild type p53 and in Caco-2 cells which express mutated p53 as well as in p53-null HL-60 cells[55]. However, whether β-ionone has any effect on the other apoptotic pathways in cancer cells is not understood.

We thank Dr. Dong-Yan Jin for critically reading and revising the manuscript.