AIM: To study the application of artificial neural network (ANN) in forecasting the incidence of hepatitis A, which had an autoregression phenomenon.

METHODS: The data of the incidence of hepatitis A in Liaoning Province from 1981 to 2001 were obtained from Liaoning Disease Control and Prevention Center. We used the autoregressive integrated moving average (ARIMA) model of time series analysis to determine whether there was any autoregression phenomenon in the data. Then the data of the incidence were switched into [0,1] intervals as the network theoretical output. The data from 1981 to 1997 were used as the training and verifying sets and the data from 1998 to 2001 were made up into the test set. STATISTICA neural network (ST NN) was used to construct, train and simulate the artificial neural network.

RESULTS: Twenty-four networks were tested and seven were retained. The best network we found had excellent performance, its regression ratio was 0.73, and its correlation was 0.69. There were 2 input variables in the network, one was AR(1), and the other was time. The number of units in hidden layer was 3. In ARIMA time series analysis results, the best model was first order autoregression without difference and smoothness. The total sum square error of the ANN model was 9090.21, the sum square error of the training set and testing set was 8377.52 and 712.69, respectively, they were all less than that of ARIMA model. The corresponding value of ARIMA was 12291.79, 8944.95 and 3346.84, respectively. The correlation coefficient of nonlinear regression (RNL) of ANN was 0.71, while the RNL of ARIMA linear autoregression model was 0.66.

CONCLUSION: ANN is superior to conventional methods in forecasting the incidence of hepatitis A which has an autoregression phenomenon.

Hepatitis A is an important infectious disease in the world[1-4]. Guidelines of vaccination versus hepatitis A call for correct estimation of the incidence of hepatitis A[5-9]. The occurrence of infectious diseases has its rules, affected by the speed of pathogen variation, susceptible accumulation and environmental changes. Early recognition of the epidemic rules is significantly important for the prevention and control of hepatitis. Among the available models, time series analysis[10,11] and regression analysis[12-14] are poorly suited for discovering the epidemic rules. The reason for this lies in the complexity of their relationship.

However, artificial neural networks (ANN) can recognize the rules to make right prediction and provide assistance for decision-making because they have the characteristics of self-organizing and self-learning processes[15-18]. Artificial neural networks are computation systems that process information in parallel, using a large number of simple units, and that excel in tasks involving pattern recognition. These intrinsic properties of the neural networks have been translated into higher performance accuracy in outcome prediction compared with expert opinion or conventional statistical methods[19-22].

Recently, backpropagation (BP) artificial neural network has been widely applied to a variety of problems in the field of medicine[23-26]. It is also called the front forward network because it is the front forward error propagation network without feedback. There is no mutual connection among the neurons in the same layer.

In the present work, we applied several artificial neural networks to the forecast of the incidence of hepatitis A. We also represented the basic principles and how to train the neural networks. 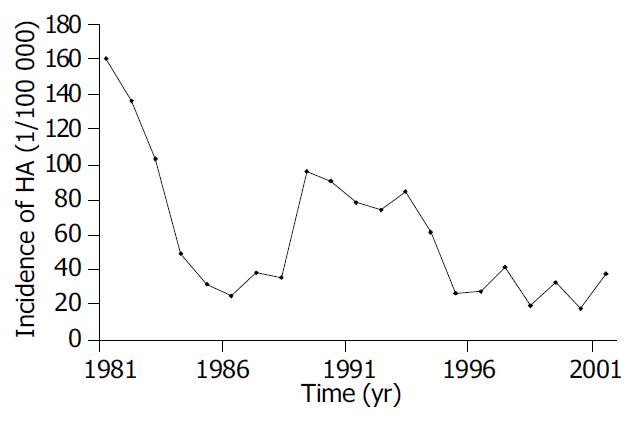 Figure 1 Incidence of hepatitis A in Liaoning Province, China.
Construction, training and simulation of the network

Automatic network designer The automatic network designer determined a suitable architecture, using a combination of heuristics and sophisticated optimization strategies. It conducted a large number of tests, which were used to determine the best architecture. It could automatically compare linear, probabilistic neural network (PNN), generalized regression neural network (GRNN), radial basis function and multilayer perceptron networks (Figure 2), and automatically choose the smoothing factor for PNN or GRNN, the smoothing factor and the number of units for radial basis function networks, and the number of units for multilayer perceptrons. We could control the length and rigor of search iteration to be performed, and bias the search towards smaller networks using a unit penalty factor. 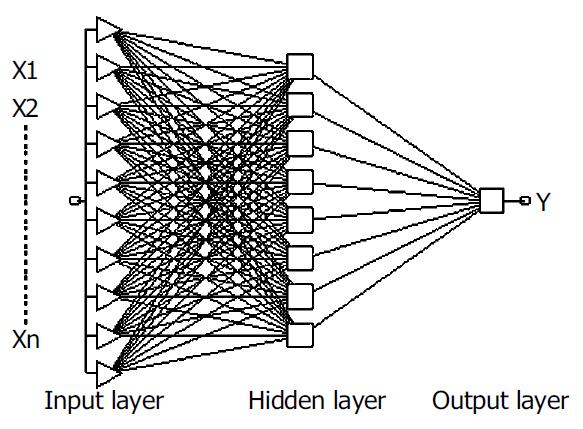 Intelligent problem solver In ST NN, an intelligent problem solver was used to select the most excellent network. We chose the advanced version to customize the design process, the problem needed to be solved was a time series problem. Because many time series had a natural period, steps parameter equals to 1 was indicated here by ARIMA analysis. The output variables were transformed values of incidence of hepatitis A, and the input variables were time and AR (1) which meant former transforming values. The software could search for a useful subset of the specified variables. The cases in the data set were divided into three subsets, one for training the network, one for cross verification and the last one for testing. In practice, the data from 1981 to 1992 were used to train the network and the data from 1993 to 1997 were used as a verifying set. The performance of the network could be tested by estimating the data from 1998 to 2001.

Four types of networks, such as linear network, multilayer perceptron (3 layers), probability network or GRNN and radial basis function, needed to be considered. In the mean time, network complexity was determined automatically. A medium length of design procedure was selected, which conducted a fast search for an optimal network. The network saved would be one with balance performance against types and complexity. The best network found (taking account of diversity) was retained.

Choosing the number of hidden layers and units was the most critical problem. There were a few heuristics that could guide here. One hidden layer was sufficient for most problems when multilayer perceptrons were used. If the error could not be gotten down to an acceptable level even with a large number of hidden units, it might be worth trying two hidden layers.

A large number of hidden units could generally model a more complex problem, but required more training and were more prone to poor generalization. The changes in training and verification errors should be observed as the experiment was being done. If the addition of more hidden units caused a decrease in both, then the network was probably too small. However, if the verification error was significantly larger than the training error and, in particular, if it deteriorated during iterative training, then the network was probably too large.

One index to evaluate the performance of networks and ARIMA was sum square of error (SSE):Math 1. The other was nonlinear determinant coefficient: Math 2, where yi is the real value of case i and ＾yi is the estimated value of case i.

Finally 24 networks were tested, and 7 were retained. The best network we found was BP network, which had excellent performance, its regression ratio was 0.73, and its correlation was 0.69.

In ARIMA time series analysis results, the best model was first order autoregression without difference and smoothness. The coefficient of AR (1) and constant were 0.83 and 81.22, respectively (Table 2).

Comparison between BP network and ARIMA

The goal of training the network was to compare the performance with conventional methods by using inverse transforming predicted value obtained from the network. Predicted value and error are shown in Table 3, and its corresponding line graph is shown in Figure 4. 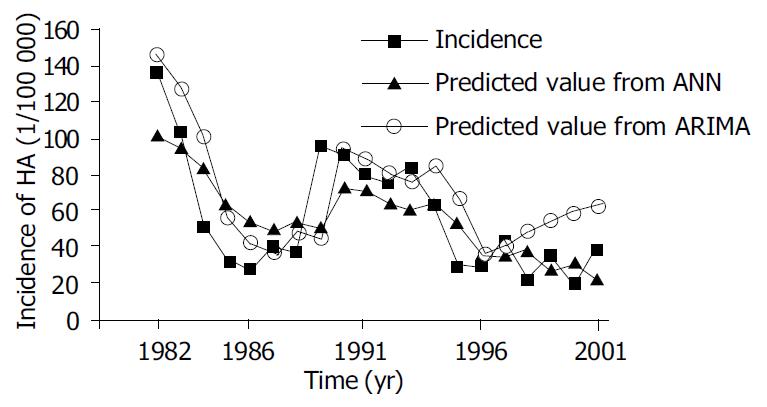 Figure 4 Incidence of hepatitis A and its predicted value.

Forecasting the incidence of infectious diseases is very important for their prevention and control. Solving this problem calls for the ability to learn the unknown mapping or function only by the existing examples[27,28]. However, after the mapping or a similar one is learned, artificial neural networks can be used to estimate the mapping when only several parts are known. Now artificial neural networks have been widely accepted as a potentially useful way in modeling complex nonlinear and dynamic systems[29-31]. Neural networks could remove neither the need for knowledge nor prior information about the systems of interest[32]. They just reduce the model’s reliance on the prior information while totally removing the need for the model builders to correctly specify the precise functional forms of the relationship that the model seeks to represent[33]. In addition, they offer real prospects for a cheaper, more flexible, less assumption-dependent and adaptive methodology.

Generally, there are two major ways to train the networks, one seeking high accuracy, and the other considering both the accuracy and performance. Through the former method, mapping was input from N-dimensional space and output to M-dimensional space. Thus, the phenomenon of overlearning occurred and the results of extrapolation were not perfect[34]. In the present work, we divided the original data into three parts, one for training, one for verification, and one for extrapolation and prediction. Thus the problem of overlearning was solved effectively. Time series analysis showed that there was a first order autoregression phenomenon in the data without exponent smoothing. Autoregression phenomenon might often exist in the data of the incidence. Traditional method of solving this is time series analysis[35]. However, it is difficult to practice because it requires to meet several conditions, such as white noise[36]. There are no such limitations in artificial neural network, and the software could voluntarily choose appropriate order of autoregression to fit and predict. In addition, RNL has shown that it is reasonable to employ artificial neural networks in modeling complex nonlinear data.

In conclusion, ANN is likely to be an effective tool in processing time series data. The construction and explanation of the model should be further explored.