AIM: To set up a real-time fluorescent quantitative reverse transcription-polymerase chain reaction (RT-PCR) assay, to detect human telomerase reverse transcriptase (hTERT) messenger RNA in gastric carcinomas, and to evaluate quantitative determination of hTERT mRNA in the diagnostic value of gastric carcinomas, and to analyze the correlation between the expression level of hTERT mRNA and clinicopath-ological parameters in patients with gastric cancer.

METHODS: A real-time quantitative RT-PCR (RQ-PCR) based on TaqMan fluorescence methodology and the LightCycler system was used to quantify the full range of hTERT mRNA copy numbers in 35 samples of gastric carcinomas and corresponding adjacent non-cancerous tissues. The normalized hTERT (NhTERT) was standardized by quantifying the number of GAPDH transcripts as internal control and expressed as 100 × (hTERT/GAPDH) ratio. Variables were analyzed by the Student’s t-test, χ2 test and Fisher’s exact test.

RESULTS: NhTERT from gastric carcinomas and corresponding adjacent non-cancerous tissues was 6.27 ± 0.89 and 0.93 ± 0.18, respectively (t = 12.76, P < 0.001). There was no significant association between gastric cancer hTERT mRNA expression level and patient’s age, gender, tumor size, location and stage (PTNM), but a significant correlation was found between hTERT mRNA expression level in gastric carcinomas and the degree of differentiation.

CONCLUSION: Quantitative determination of hTERT mRNA by RQ-PCR is a rapid and sensitive method. hTERT might be a potential biomarker for the early detection of gastric cancer.

We analyzed tissues (gastric cancer and corresponding non-cancerous tissues) from surgically removed primary gastric cancer in Union Hospital and Tongji Hospital of Tongji Medical College of Huazhong University of Science and Technology from October 2002 to May 2003. All patients (25 males and 10 females, mean age 55.2 years, range 34-73 years) were at initial presentation and had no radiotherapy or chemotherapy history before surgery. All samples were examined histopathologically to confirm the diagnosis. Control tissues were the corresponding non-cancerous mucosa from the stomach of cancer patients, and excised beyond 5 cm from neoplastic lesions. Samples were stored at -80 °C until further analysis.

TRIzol was the product of Omega. The reagents used for reverse transcription were purchased from Promega. The reagents used for PCR and PCR product purification, glyceraldehydes 3-phosphate dehydrogenase (GAPDH) quantification, and the primers and TaqMan probe of hTERT were all purchased from Shanghai Shenyou Company. Both T4 DNA ligase and PMD18-T vector were the products of TaKaRa. The other chemical reagents used in this study were ACS reagents of China. The fluorescent quantitative PCR instrumentation was the LightCycler system of Roche.

We used a RQ-PCR assay based on TaqMan fluorescence methodology to quantify the full range of hTERT mRNA copy numbers[6,7]. This method used a dual-labeled nonextendable oligonucleotide hydrolysis (TaqMan) probe in addition to the two amplification primers. The probe contained 6-carboxy-fluorescein (FAM) as a fluorescent reporter dye, and 6-carboxytetramethyl-rhodamine (TAMRA) as a quencher for its light emission spectrum. During the extension phase of PCR, the probe hybridized to the target sequence and was then cleaved due to the 5’ to 3’ exonuclease activity of Taq polymerase. The increase in the fluorescence signal of the reporter was proportional to the amount of specific PCR products, providing highly accurate and reproducible quantification. The number of PCR cycles to reach the fluorescence threshold was the cycle threshold (Ct). The Ct value for each sample was proportional to the log of the initial amount of input cDNA. By plotting the Ct value of an unknown sample on the standard curve, the amount of target sequences in the sample could be calculated.

To normalize the hTERT mRNA expression for sample-to-sample differences in RNA input, RNA quality, and reverse transcriptase efficiency, we amplified the housekeeping gene GAPDH. According to each standard curve, we got the copy numbers of GAPDH and hTERT, respectively. The ratio between copy numbers of hTERT and GAPDH represented the normalized hTERT (NhTERT) for each sample and could be compared with that of other samples[8].

According to GAPDH quantification reagents and the reference[9], the nucleotide sequences of oligonucleotide TaqMan probes and primers are shown in Table 1.

According to the manufacturer’s instructions, total RNA from frozen tumor and corresponding non-cancerous tissue specimens was isolated by disruption of 50-100 mg tissues in 1 mL of TRIzol. RNA was quantified spectrophotometrically, and its quality was determined by agarose gel electrophoresis and ethidium bromide staining. Only samples that were not degraded and showed clear 18 S and 28 S bands under ultraviolet light were used for real-time RT-PCR.

All samples were denatured for 10 min at 60 °C to melt secondary structure with the template and cooled immediately on ice for 5 min to prevent secondary structure from reforming. Total RNA (1-2 µg) was reverse transcribed in a total volume of 25 µL containing 1 × RT buffer (Promega), 200 U of Moloney murine leukemia virus Reverse Transcriptase (M-MLV RT) (Promega), 20 U of RNasin (Promega), 0.2 µg random primer (Promega) and 1 mmol/L deoxynucleotides. The reaction was performed for 10 min at 25 °C, for 60 min at 42 °C and for 10 min at 70 °C. cDNA was stored at -20 °C until use.

All PCR reactions were performed using the LightCycler System (Roche Diagnostics, Switzerland) in a total volume of 20 µL containing 1 ×Taq polymerase buffer, 4 mmol/L MgCl2, 200 µmol/L deoxynucleotides, 300 nmol/L each primer, 150 nmol/L probe, 1 U Taq polymerase and 20 ng cDNA. Water instead of cDNA template was used for the negative controls. Both GAPDH and hTERT amplification were done in duplicate for each sample. The thermal cycling conditions were 5 min at 94 °C, followed by 40 cycles, each at 94 °C for 15 s and at 60 °C for 1 min for GAPDH or at 65 °C for 1 min for hTERT (two-step PCR). The number of GAPDH and hTERT transcripts in samples was calculated with the LightCycler software, using these standard curves.

Data were expressed as mean ± SD. The Student t-test, χ2 test and Fisher’s exact test were used in this study. P < 0.05 was considered statistically significant. 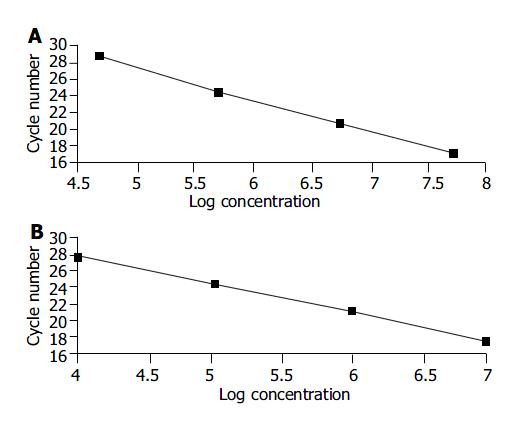 The expression of hTERT mRNA in gastric carcinomas was analyzed by a highly sensitive RQ-PCR assay. HTERT mRNA expression was detectable not only in all 35 gastric carcinomas, but also in the corresponding non-cancerous gastric tissues (Figure 2). For each experimental sample, the amount of hTERT and GAPDH was determined from the appropriate standard curve. Then, hTERT amount was divided by the GAPDH amount to obtain NhTERT. NhTERT was significantly higher (t = 12.76, P < 0.001) in tumor tissues (6.27 ± 0.89) than in the corresponding non-cancerous tissues (0.93 ± 0.18). 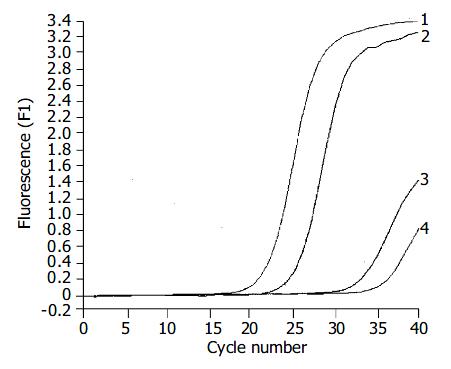 We used RQ-PCR based on TaqMan methodology for the accurate quantification of hTERT mRNA expression in gastric carcinomas. This assay has several marked advantages over the TRAP assay for cancer detection. It needs only a 95-bp fragment of hTERT mRNA, making the assay less sensitive to RNase activity and insensitive to proteases and protein inhibitors. The assay output is numerical rather than qualitative, allowing appropriate diagnostic statistics to be applied. It uses endogenous controls (GAPDH in this study) which allow correction for parameters like RNA input, RNA degradation, or RT inhibitors. Real-time PCR makes RNA quantification much more precise and reproducible, based on Ct values established in the early exponential phase of the PCR reaction (when none of the reagents is rate-limiting) rather than end point quantification of the amount of accumulated PCR product. It does not require post-PCR sample handling and the closed-tube method minimizes the risk for cross-contamination. These suggest that quantitative determination of hTERT mRNA by RQ-PCR is a powerful method to investigate the telomerase status and superior in specificity and sensitivity to the evaluation of telomerase activity by the TRAP assay. In addition, we used recombinant hTERT plasmid DNA to calculate the external standard curves, and found it was better for the quantification of mRNA than the recombinant RNA calibrator or endogenous standards[10,11]. Theoretically, the slope of the standard curve should be -3.3 if 10-fold dilutions are used, but in practice a slope between -3.0 and -3.9 is probably acceptable as long as the correlation coefficient is > 0.95. The standard curves we obtained in this study had acceptable slopes and correlation coefficients.

In this study, the level of hTERT mRNA estimated with RQ-PCR procedure was the average amount of transcripts in a whole tissue sample and mainly depended on the number of hTERT-positive cells present in the tissue. hTERT mRNA was detected in 100% of gastric carcinoma RNAs, and also in all the corresponding non-cancerous gastric mucosa RNAs. The highest NhTERT was detected in gastric cancer, whereas the lowest NhTERT was found in non-cancerous gastric tissues. However, NhTERT in samples of non-cancerous tissues was only approximately 14.8% of those found in the cancerous samples, and NhTERT was significantly higher (t = 12.76, P < 0.001) in tumor tissues (6.27 ± 0.89) than in the corresponding non-cancerous tissues (0.93 ± 0.18). We believed that these were not in contradiction to the findings using TRAP with which telomerase activity could not be detected in most non-malignant gastric tissues and the positive rate of hTERT mRNA expression by means of in situ hybridization or classical RT-PCR in gastric carcinoma[12-15]. The difference could be explained by the increased sensitivity of the RQ-PCR assay and the presence of residual malignant cells, inflammatory lymphocytes or tumor infiltrating activated cells. Our results showed real-time measurement of hTERT expression could discriminate gastric carcinoma from nonmalignant gastric tumors. This discrimination would be more distinct if the percentage of tumor cells was higher in the selected tissues.

No relationship was found in our study between hTERT mRNA expression level and patients’ age, gender, tumor size, location and tumor stage (pTNM) (P > 0.05) and there were statistical links between hTERT mRNA expression levels and the degree of differentiation (P = 0.007). These suggest that the up-regulation of hTERT appeared to be an early event in gastric carcinogenesis. HTERT may play a critical role in gastric carcinogenesis and have potential as a biomarker in the telomerase status for the early detection of gastric cancer. Real-time quantitative analysis of hTERT mRNA in tissues, cancer cells in the blood, and plasma or serum of the patients with cancer before and after surgery, radiotherapy or chemotherapy may be helpful for early detection and diagnosis of cancer, and find out therapeutic effect and estimate prognosis[16-21]. hTERT may become a target in gene therapy of cancer and inaugurate a new approach for cancer therapy.