AIM: To analyze the factors influencing the prognosis of patients with gastric cancer after surgical treatment, in order to optimize the surgical procedures.

METHODS: A retrospective study of 2613 consecutive patients with gastric cancer was performed. Of these patients, 2301 (88.1%) received operations; 196 explorative laparotomy (EL), 130 by-pass procedure (BPP), and 1 975 surgical resection of the tumors (891 palliative resection and 1084 curative resection). The survival rate was calculated by the actuarial life table method, and the prognostic factors were evaluated using the Cox regression proportional hazard model.

CONCLUSION: The primary lesion should be resected as long as the local condition permitted for stage III and IV tumors, in order to prolong the patients’ survival and improve their quality of life after operation. Total gastrectomy is indicated for carcinomas in the cardia and fundus, and gastric cancer involving the adjacent organs without distant metastasis requires gastrectomy with resection of the involved organs.

Although the mortality rate of gastric cancer has been dramatically decreased in the western country since 1930[1], cancer of the stomach remains the second most frequent malignancy in the world[2,3], and an estimate of more than 1 million new cases were identified worldwide in 1997[4]. From 1990 to 1992, the mortality rate of gastric cancer in China remained at a high level of 25.2/100000, taking up 23.2% of the total cancer-related death, and claiming the largest death toll in cancer patients[5]. As the generally acknowledged primary treatment modality for gastric cancer, surgical interventions[6-9] give rise to many controversies concerning (1) the decision on palliative resection, by-pass procedure or avoidance of operation for advanced gastric cancer (including stage IIIB or IV), (2) the optimal extent to be resected in patients with gastric cancer in the upper third, by total gastrectomy (TG) or proximal subtotal gastrectomy (PSTG), and (3) the optimal surgical resection for gastric cancer involving the neighboring organs. The aim of this retrospective study was to analyze the factors influencing the patients’ prognosis after surgical treatment, curative or palliative, of gastric cancer, and find answers to above questions.

This study included 2613 patients with primary gastric cancer admitted in Department of Oncology, Affiliated Union Hospital of Fujian Medical University, during the period of June 1972 to June 2000. There were 2059 male and 554 female patients whose ages ranged from 19 to 85 years with a mean of 55.6 ± 2.48 years. The tumors were found in the gastric cardia and fundus in 871 cases, in the gastric body in 544 cases, in the gastric antrum in 1069 cases and involving the entire stomach in 129 cases. The dimension (maximum diameter) of the tumor was smaller than 3 cm in 254 cases, between 3.1 and 6 cm in 1290 cases and more than 6 cm in 1069 cases. The tumors were histologically classified according to WHO classification criteria, and staged according to the TNM system used since 1989 in China[10], as listed in Table 1.

Of all those patients, 312 had not received any previous surgical intervention, and 2301 (88.1%) had undergone operations. Among the patients with a history of previous operations, 196 had explorative laparotomy (EL), 130 had by-pass procedure (BPP), 1975 underwent surgical resection of the tumor, of whom 891 received palliative resection. The tumor resection was considered palliative on the basis of the presence of residual tumor or distant metastasis or both at the end of surgery. A total of 1084 patients underwent curative resection, making up 54.9%. The surgical procedure was defined as curative when no grossly visible tumor tissue (metastasis or lymph node involvement) remained after the resection and the resection margins were histologically normal.

In all the 1975 surgical patients, distal subtotal gastrectomy (DSTG) was performed in 894 patients, total gastrectomy (TG) in 615, and proximal subtotal gastrectomy (PSG) in 466. Among the patients undergoing curative resection, limited D1 nodal dissection was performed in 159 patients (during the period of 1972 to 1979), extended D2/D2+ in 846 and extended D3 in 79. The clinical data of the 1975 patients with surgical tumor resection are shown in Table 2. Metastases involving such organs as the esophagus, spleen, pancreas, colon and the duodenum were identified in 439 patients.

The 5-year cumulative survival was calculated after both curative and palliative tumor resection by actuarial life-table method. Statistical analysis was carried out by using Chi-square test and Wilcoxon rank sum test. Multivariate analysis was applied using the Cox regression proportional hazard model. The SPSS 10.0 for Windows was used for all the statistical analyses.

Among the 2613 patients with gastric cancer, 163 failed to be followed-up with the follow up rate of 93.8%. Postoperative complications arose in 189 cases with an incidence of 9.6%. Death within one month after operation occurred in 41 cases (2.1%).

The survival rate was calculated in 1498 patients with surgical resection, curative and palliative, of the tumors. Univariate and multivariate analyses were used to evaluate 5-year survival rate with respect to the main clinicopathologic and treatment variables after both curative and palliative treatment. The overall 5-year survival after surgical resection (operative mortality excluded) was 31.6%, 51.2% for curative treatment, and 7.8% for palliative resection; 91.1% for stage IA , 86.7% for stage IB , 51.1% for stage II, 34.5% for stage IIIA , 29.1% for stage IIIB , and 5.9% for stage IV (Figure 1, Table 3). The median survival period was 4.6 mo after NO, 5.2 mo after EL, 6.4 mo after BPP, and 15.2 mo after palliative resection (P = 0.0001). The 5-year survival rate was 32.5% for patients with total gastrectomy, and 28.3% for those with total gastrectomy plus resection of the adjacent organs. Univariate and multivariate survival analyses showed that the variables independently correlated with poor survival included advanced stage, upper third location, palliative resection, poorly differentiated adenocarcinoma, type IV of Borrmann classification, tumor metastasis (N3), tumor invasion into the serosa and contiguous structure, proximal subtotal gastrectomy for upper third carcinoma and D1 lymphadenectomy after curative treatment (Table 4). 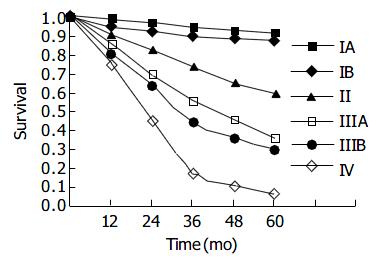 Surgical treatment of gastric cancer has been universally recognized as the most effective way of treatment, and the 5-year survival rate of curative resection in this study reached 51.2%. Although curative resection for gastric cancer is most effective, most cases are in stage III and IV on identification in China[11-13], as seen from the high rate of 74.9% in this study, and many of them were ineligible for radical treatment. Ekbom et al[14] reported that BPP in advanced cases only resulted in the average survival period of 5.9 mo, and none of the patients survived for more than one year, similar to the results of without tumor resection[15]. The average survival periods of patients without operation, with EL and BPP in China, as reported by National Gastric Cancer Cooperation Organization, were 4.1, 4.7, and 5.5 mo, respectively[11], comparable with our findings (4.6, 5.2, and 6.4 mo, respectively, P > 0.05). In this study, the survival period after palliative resection was 15.2 mo with a 5-year survival rate reaching 7.8%, significantly higher than that in patients without operation or with EL and BPP (P < 0.01). Therefore, for stage III and IV gastric cancer, resection of the primary focus should be performed as much as possible. After the resection, the patient’s condition might be improved to tolerate postoperative chemotherapy, immunotherapy and comprehensive treatment by traditional Chinese medicine, and the survival period of the patients might consequently be prolonged and quality of life improved[16-20].

There is still controversy over the impact of the extent of resection for tumors located in the upper third of the stomach (including cardia and fundus)[21]. Some researchers[22-25] advocate the performance of PSG so as to possibly retain the stomach even partially, and proper digestive function. It also enables patients to avoid the late stage complications following TG. However, Fujimaki and Lin discovered in their respective research that the rate of lymphatic metastasis of group 5 and 6 might reach up to 24.0% to 29.0% in some cases[26,27]. It is difficult to eliminate all tumor tissues without performing TG. The incidence of postoperative regurgitant esophagitis is high and volume of residual stomach is small, and TG may overcome these defects to improve the 5-year survival rate[28-31]. According to the review of our 28-year experience with the treatment of gastric cancer, two types of resection for cancer of the cardia (the upper 1/3 location) irrespective of the tumor stage contributed to a 5-year survival rate after TG of up to 32.5%, while the 5-year survival rate after PSG was only 20.1%, showing significant difference (P < 0.05). Following great improvements in surgical techniques, postoperative care and measures of digestive tract reconstruction, postoperative complication and death rate have been remarkably decreased[32-34]. The incidence of complication was only 12.7% and death rate 2.9% in the 615 patients receiving TG in this study. In recent years, we attempted routine TG for treating cancer of the upper 1/3 location as long as the patients’ general condition permitted, and of all gastrectomy cases, 31.1% were received TG in the study.

In approximately 15.5%-22.3% of patients with advanced gastric cancer, the malignancy had already invaded the neighboring organs when the diagnosis was established[11,35,36], requiring critical decisions on the treatment for the best interests of the patients. In this study, 439 cases (22.9% of those with surgical resection) had combined resection of the involved organs, and the total 5-year survival rate was 28.3%. In these cases extensive radical resection of gastric cancer combined with resection of the spleen and the body and tail of pancreas was found to produce the best therapeutic effect, yielding a 5-year survival rate of 43.2%. For treatment of 28 cases of advanced gastric cancer involving multiple neighboring organs, left upper abdominal evisceration (LUAE) and resection of the total stomach, lower end of esophagus, left lobe of liver, spleen, body and tail of pancreas, transverse colon and partial suprarenal gland were performed, resulting in a 5-year survival rate of up to 16.7%. One of the patients has survived for 10 years. Pessimism toward gastric cancer invading nearby organs is not reasonable. For gastric cancer with metastasis to adjacent organs, but without incurable factors such as liver metastasis, peritoneal dissemination (P2 and P3) and widespread nodal involvement, complete excision of the invaded organs should be performed as much as possible, irrespective of the number or site of the invaded organs. Cure is possible in some cases of advanced gastric cancer. In cases with incurable factors, partial resection of the involved organs is not recommended, as it almost invariably fails to prolong the patients’ survival in comparison with simple resection of the primary focus of gastric cancer, but increases the sufferings of the patient and prolongs the operation time. Palliative operation to resect the primary focus might be a better alternative, for it not only relieves obstruction, hemorrhage and pain, but also prepares favorable condition for other postoperative treatments and at the same time, improves the quality of life and prolongs the survival period of the patient.